WASHINGTON—The Government of Japan today conferred upon Adam S. Posen, president of the Peterson Institute for International Economics and a leading scholar of the Japanese economy, one of its most prestigious decorations, the Order of the Rising Sun, for his distinguished achievements in advancing US-Japanese economic relations and Japanese economic policy in the global context. 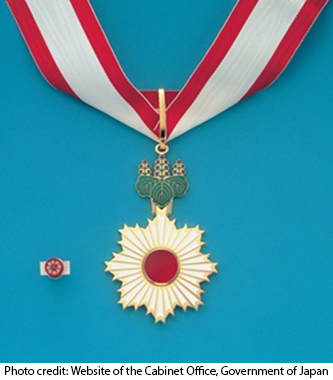 "In recognition of Dr. Posen's contributions to Japanese macroeconomic policy and global economic cooperation and to promotion of mutual understanding between the United States and Japan in the fields of financial, trade and fiscal policy, he will receive the Order of the Rising Sun, Gold Rays with Neck Ribbon," the Embassy of Japan in Washington announced.

Posen is among the few foreign recipients of the 2021 Spring Imperial Decorations and one of a small number of non-Japanese citizens ever to be named to the Order of the Rising Sun, which has been bestowed since 1875, making it the oldest Japanese order.

A macroeconomist whose areas of research focus include the Japanese economy, Posen is recognized for his influential studies of Japan's great recession in the 1990s as a failure of macroeconomic policy, with implications for the international response to the 2008–10 global financial crisis. He counseled the Koizumi government in 2002–04 and then the Japanese Cabinet Office on the start of Abenomics and on the conclusion of the Comprehensive and Progressive Agreement for Trans-Pacific Partnership (CPTPP) trade agreement after the Trump administration withdrew the United States. He wrote the definitive book on Japan's economic crisis of the 1990s, Restoring Japan's Economic Growth, and his 2010 analysis, The Realities and Relevance of Japan's Great Recession, is still cited extensively.

The Peterson Institute for International Economics (PIIE) is an independent nonprofit, nonpartisan research organization dedicated to strengthening prosperity and human welfare in the global economy through expert analysis and practical policy solutions.

For specifics about our media center or call-ins or to arrange an interview with a PIIE expert, please reach out to our Michele Heller, Director of Strategic Communications and Media Relations. For other inquiries:

For review copies of our publications (press only), please contact:

If you are interested in booking an expert for a speaking engagement, please email [email protected].

If you have additional questions, you can also reach out through our main contact page.