Why Is Ukraine So Poor?

The first question Russians usually pose when discussing Ukraine's economy is: Why are they so poor? (Почему они такие бедные?) The question is to the point. Ukraine's economy has persistently underperformed quite spectacularly because of pervasive corruption. In 1989, Ukraine's GDP per capita was 10 percent higher than Russia's according to old Soviet statistics. Today, Russia's GDP per capita at current prices and exchange rates is about three times higher. Poland has risen even faster.

Ukraine's financial crisis forces the country to change its ways for the better.

How could this happen? An overview of the real economic growth rates of Ukraine and Russia from 1989 until 2013 is telling (see figure 1). We can distinguish between five different periods. In the early transition, 1991–94, Ukraine had no economic policy, which resulted in hyperinflation and massive decline in output, far worse than in Russia, which attempted serious reform even if it did not quite succeed. This is the decisive difference. Ukraine's GDP fell far more than Russia's, and the economy got caught in a trap of rent seeking to quite an extent compared with Russia, where privatization led to profit seeking.

In 1995–99, both Ukraine and Russia performed badly. In the decade of 1989–99, Ukraine's GDP fell by no less than 61 percent compared with a similar 59 percent for Russia. Both countries were woken up by the Russian financial crash of 1998. They were forced to balance their budgets by cutting harmful enterprise subsidies, which prompted economic growth.

In the third period 2000–07, both Ukraine and Russia grew soundly, Ukraine by an average of 7.5 percent a year and Russia at 7 percent a year. The global financial crisis of 2008–09 called them bluff over their overheating. Ukraine had thrived on a big financial bubble, which burst in September 2008. It saw its GDP decline by 15 percent in 2009, while Russia's GDP plummeted by 7.8 percent.

Neither country carried out any serious reforms after the crash of 2008. Ukraine was bailed out by the International Monetary Fund and Russia by its currency reserves. They grew at a similarly low speed in 2010 and 2011, though Ukraine stagnated in 2012, while Russia continued growing slightly.

From this perspective, the Ukrainian situation does not look that strange. It differs from Russia's mainly because of three reasons. First and most importantly, Ukraine had no economic policy but maintained the old Soviet system, while allowing hyperinflation from 1991 to 1994; Russia attempted serious market reforms. Second, from 2000 onward world oil prices started rising, boosting Russia's GDP at current exchange rates but not in terms of real economic growth. Third, in 2010–13, president Viktor Yanukovych pursued an incredibly predatory regime, concentrating all power and wealth to his family. He failed to follow late Russian Finance Minister Aleksandr Livshits's dictum: "Надо делиться [You need to share]!"

The National Bank of Ukraine forecasts that the country's economic output will plummet by 10 percent this year. Then the budget deficit will surge to 15 percent of GDP, and the public debt to over 100 percent of GDP next year. The Ukrainian currency has already been devalued by 60 percent, driving inflation to 19 percent. A classical devaluation-inflation cycle is near and can lead to a financial meltdown.

Three-quarters of this sharp decline in output is caused by the war in the eastern part of Donbas, which used to deliver 10 percent of GDP and 16 percent of Ukraine's industrial production. After artillery from the east blew up the power stations, the pumps in the coalmines have stopped, and the mines have been flooded. As a consequence, Ukraine's total coal production fell by more than half in August and September in comparison with those months in 2013. Steel production is down by one-third. Agriculture, by contrast, is booming and the grain harvest may even top last year's bumper harvest.

While Ukraine's economic situation is desperate, it is not hopeless. The first thing to do is to have new presidential and parliamentary elections to get political leaders who want to save the country rather than themselves and their families. That is what Ukraine has just done.

The next step is to throw out the old officials. In September Ukraine's parliament adopted a law on lustration, which is now leading to the sacking of old top officials throughout the administration. It needs to be accompanied by a constitutional reform leading to more decentralization and an abolition of superfluous or even harmful state agencies and a far-reaching deregulation.

Then comes the hard step: to cut public expenditures from their current level of 53 percent of GDP by one-tenth of GDP in 2015 to rein them in to a reasonable level. The excessive payroll tax must be slashed and the flat personal income tax should be restored. The lawless tax police should be abolished.

The main cut in public expenditures should be the elimination of the energy subsidies, which currently amount to 10 percent of GDP. Domestic energy prices should finally be unified, while social cash compensation should be given to the poorest half of the population. As a consequence, Ukraine could cut its energy consumption by half and boost domestic energy production to become self-sufficient in energy. The most important effect would be that the corrupt arbitrage between low state-controlled gas prices and free market prices finally could come to an end.

Needless to say, Ukraine will need substantial international financial assistance to carry out these major reforms. It is likely to come primarily from the International Monetary Fund and the European Union.

Ukraine's financial crisis forces the country to change its ways for the better. Democracy has already been established. The public budget deficit must be cut and the rest financed with international support. The power of the old Soviet establishment and its endemic corruption should be broken. Finally, Ukraine can pursue a deregulation that allows its economy to grow. 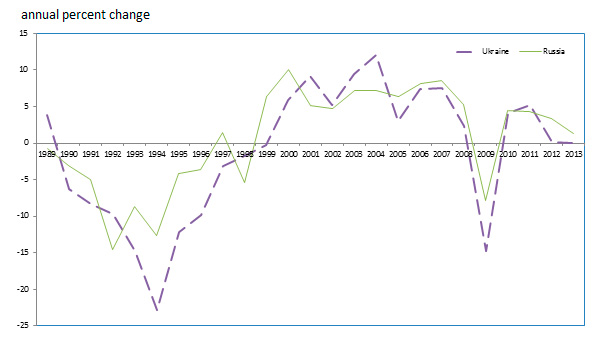 Will Russia or the West Win the Economic and Financial Battle?

The West Has Got Its Russia Sanctions Wrong