Op-ed in the Economist. Reposted with permission.

The McKinsey report on the distributional effects of ultra-low interest rates makes some fascinating observations on who gains and who loses from the decline in interest rates over the past five years. But many readers are likely to draw the false inference that central banks are free to choose between different levels of interest rates and that the politics of winners and losers can or should be a factor in central banks' choices.

In reality, central banks have only transitory control of real rates of return. The task of central bankers is to keep interest rates at the values dictated by market forces. Any deviation from the market-based equilibrium pushes economic output away from its long-run potential and causes inflation to move away from its target. Central banks are not responsible for ultra-low interest rates; they are only the messengers (or facilitators) of the spending and saving decisions of myriads of households, firms, and governments. The gains and losses highlighted by McKinsey are the outcomes of these underlying forces.

The Global Financial Crisis of 2008 caused a large decline in desired spending by private agents at existing rates of interest. Central banks responded by quickly lowering short-term interest rates close to their lower bound of zero. Some central banks undertook large-scale purchases of long-term bonds, also known as quantitative easing (QE), in order to push down long-term interest rates.1 These central bank actions were necessary to return output and employment to potential and to keep inflation from falling below target. If anything, recent declines of inflation rates in Europe and the United States suggest that central banks have been too timid and have not pushed rates as low as needed.

McKinsey argues that some of the many channels through which low interest rates work have been dammed up. Most notably, banks have tightened lending standards, making it harder for households and smaller firms to borrow. But it does not follow that the damming of some channels means that all channels are blocked. Interest rates may need to be even lower to get sufficient credit flowing through the remaining channels or else central banks may need to look for innovative ways to get credit to flow through the channels that are dammed up.

The report notes that ultra-low rates have reduced fiscal pressures on governments, which may have allowed a larger initial fiscal stimulus and a slower pace of subsequent spending cuts and tax increases. Other channels that appear to be working include housing and net private foreign investment, which helps exports. Consumption is also supported by higher real estate and equity prices.

Exhibit 4 of the report shows that long-term real interest rates have been declining in advanced economies for more than 30 years. Ultra-low rates of return clearly have roots that go beyond the crisis and its aftermath. Secular forces are operating on both demand and supply of capital. 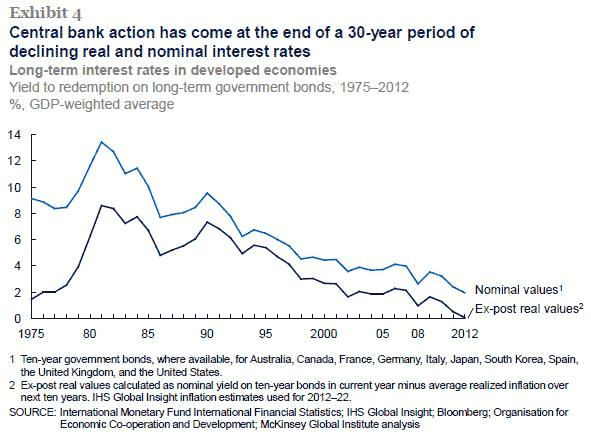 Slowing population growth and aging workforces are causing a trend decline in the demand for capital investment. Some economists think that the rate of technological progress has slowed (Gordon 2012), which also would tend to reduce investment demand. My own research highlights the massive increase in the supply of net foreign saving by governments around the world, especially in the emerging markets. As a group, the emerging and developing economies now have a current account surplus, meaning that they are lending to the rich world rather than borrowing to fund economic development.

Many have argued that QE mainly benefits the wealthiest. This report pours cold water on that view. It is true that QE has pushed up bond prices, but it does not increase the ultimate value of existing bonds in terms of income for future retirement, and it reduces the return that wealthy savers can get on new bonds. QE has pushed up equity and real estate prices, but that is mainly a transfer from tomorrow's wealthy to today's wealthy.2 As net borrowers, the non-wealthy and the young gain more from low interest rates on mortgages and student loans than they lose on their relatively meagre savings. Given that less QE would mean less employment, the non-wealthy clearly are better off with QE than without it.

Interestingly, the biggest losers from low interest rates are foreign investors in the United States. Perhaps that is why officials in emerging markets—who have large hoards of foreign exchange reserves in dollars and euros—are so vociferous in denouncing QE. But the real question is why do governments in relatively poor countries want to send so much capital to earn such paltry returns in the rich countries?

The report's final section discusses the risks of exit from QE, but the discussion is oblivious to the benefits of the strong growth that would be a precondition to rising interest rates. An alternative "lost decade" scenario is described in which interest rates would remain low. A more likely outcome, not covered by McKinsey, is moderate growth and a gradual return to potential. In this outcome, real interest rates in advanced economies are likely to remain below their pre-crisis average because of the secular decline in investment demand and the rise of official capital inflows from emerging markets.

2. The report argues that QE has raised equity prices only 1 percent, based on studies of the effect of QE announcements on equity indices. But surely the decline in interest rates since 2007 has had a much larger cumulative effect on equity prices through the reduction in corporate interest expense and the lower discounting of future dividends.