June is shaping up to be a busy month on President Trump 's policy agenda. Even if his headline proposals for health care and tax reform are stymied, another of his policy promises—increased trade protectionism—is proceeding full-steam ahead.

However, the form that it is taking is unusual. Trump is unlikely to fulfill campaign threats of NAFTA withdrawal or imposing wholesale, 45 percent import tariffs on China.

Instead, the Trump administration has unleashed a steady, stealthy and unilateral approach to imposing trade barriers that does not require consultations with Congress. As he recently tweeted, Trump 's first steps may involve taking “major action” by imposing restrictions on imports of steel and aluminum because he perceives them as a threat to national security.

I look forward to reading the @CommerceGov 232 analysis of steel and aluminum- to be released in June. Will take major action if necessary.

In a recent study, I examine the trade policy actions that the Trump administration triggered during its first “100 days” through an unprecedented set of investigations arising under a host of different US trade laws. The most dramatic were the tweet-worthy national security investigations of steel and aluminum imports. Other investigations under different laws involve investigations of imported products such as softwood lumber and solar panels.

The administration is on the cusp of deciding whether to impose new trade barriers. Trump has sent strong political signals that such barriers are likely. However, the trading partners hit by these protectionist measures may not be the ones you might expect.

On April 20, President Trump instructed Commerce Secretary Wilbur Ross to initiate an investigation of whether steel imports were a threat to the US national security under Section 232 of the Trade Expansion Act of 1962. This request was novel on two counts. First, the law itself has rarely been used: This was the first investigation under the law since 2001, only the 14th since 1980, and only twice have trade barriers resulted after those investigations. Second, Trump 's decision that the government should initiate the case is rare.

Trump 's decisions on steel were not a one-off. Only a week later, Trump self-initiated a second investigation, this one alleging that aluminum imports threaten national security.

Trump 's new trade barriers could cover an additional 3 percent or more of US imports in these sectors. However, much of potential US steel and aluminum imports—especially from China—are already covered by special, highly restrictive trade barriers imposed under other US trade laws. Some of these restrictions date to the Clinton administration. This means that the countries likely to be hit by Trump 's new protectionism would be Canada, Germany, Japan, Mexico, and South Korea. In the period since World War II, these countries have not posed a notable threat to US national security.

By self-initiating the national security cases, Trump also confirmed commitment to his inaugural speech statement that “Protection will lead to great prosperity and strength.” It is not surprising, then, that companies are beginning to come forward to ask for trade barriers under another rarely used law—the global safeguard, or Section 201 of the Trade Act of 1974.

The first such petition was filed by a bankrupt US company, Suniva, on April 26 claiming that imports of solar panels were the cause of their injury. This is also the first case since 2001 under this US law.

Historically, companies have rarely triggered investigations under the global safeguards law. Even if there was evidence that imports injured their industry, the law gives the president discretion as to whether to impose new trade barriers. Many presidents have been wary about fielding investigations under this law. Trump, in contrast, has indicated that when it comes to import protection, his administration is open for business.

But just like aluminum and steel, significant US trade barriers are in place against imports of solar panels from China under a different law. Any new Trump barriers probably would fall on the current sources of US solar panel imports, such as Germany, Malaysia, Mexico and Singapore.

The fourth major trade action of Trump 's first 100 days involved softwood lumber imports from Canada. The trade policy itself is less unusual, because the action arose under the routinely used US antidumping and countervailing duty laws. Rather, what was unusual was that Trump and Ross weighed in politically, thereby escalating the issue on the other side of the border.

With Trump now involved, Canadian Prime Minister Justin Trudeau was also forced to engage. He almost immediately threatened to retaliate by revoking Canadian port access from US coal producers and launching his own trade actions, which could end up targeting Canada 's imports from Oregon.

Adding up the trade protection: Potentially lots of new barriers on unwitting partners

The figure below aggregates each of the actions occurring under Trump 's administration of US trade laws through its first 100 days. Suppose—beginning this month—the administration completes these investigations and begins imposing special new trade barriers. In comparison to the day he stepped into office, the share of US imports suddenly covered by these trade barriers would nearly double, from 3.8 to 7.4 percent. 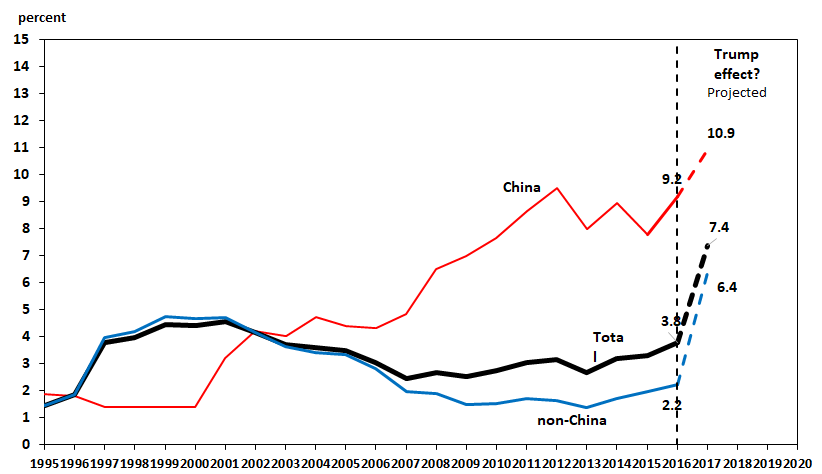 The share of US imports from China subject to trade barriers would increase from 9.2 to 10.9 percent. Again, the United States has some real grievances with China 's actions as a nonmarket economy, its industrial overcapacity in steel and aluminum, and alleged subsidies in solar panels.

However, Trump 's new trade protection may not end up targeting China, but will hit partners such as Canada, Germany, Japan, Mexico and South Korea—most of which have little to do with the concerns the United States has with China. The share of US imports from these sorts of countries subject to special trade barriers would nearly triple, from 2.2 to 6.4 percent.

Trump 's protectionism could result in higher costs for US industries that use steel, aluminum, and lumber, and a potential loss of jobs for solar panel installers. And, of course, trading partners could retaliate, or impose trade barriers on some US export that they think threatens their national security. Trump 's stealthy trade policy could trigger a slow dismantling of the rules-based trading system.