Anybody familiar with car traffic and pollution in Delhi or Beijing understands that any agreement at the conference on climate change in Paris will be successful only if its implementation curbs emissions from rising consumption by residents of the emerging economies. As rising incomes and consumption spread to broader sections of the vast population in emerging economies, this will be the main source of emissions growth in the decades ahead and thus the key battleground in the fight against climate change.

The type of infrastructure chosen by today's policymakers in the emerging economies will lock in emission levels for decades to come and will thus determine whether it is possible to stop the planet from warming an additional 2 degrees centigrade. For countries at India's level of economic development, this means choosing metro-railways over cars, and renewable energy or coal with "capture and store" technology over more polluting options. Advanced economies and international official lenders need to help emerging economies ensure their expanding consumption is supported by cleaner technologies. For example, incentives must be given for international companies to build climate-friendly infrastructure in developing economies.

Rising demand for transportation will need to be accommodated by a massive infrastructure investment push in the emerging economies, which will place pressures on public finances. Tomas Hellebrandt and I gauge the macroeconomic relevance of these pressures by projecting the rise in spending on transportation goods and services during 2015–35 as a share of a country's total consumption in 2015 (how big the need for investment is by comparison to the initial size of the economy). By this metric, India stands out with the highest pressure, followed by other countries in emerging Asia and sub-Saharan Africa (see figure). Emerging economies will need to reorient their expenditures toward infrastructure, raise additional revenues, or make greater use of public-private partnerships in infrastructure investment with modalities that limit fiscal risks for the public sector. 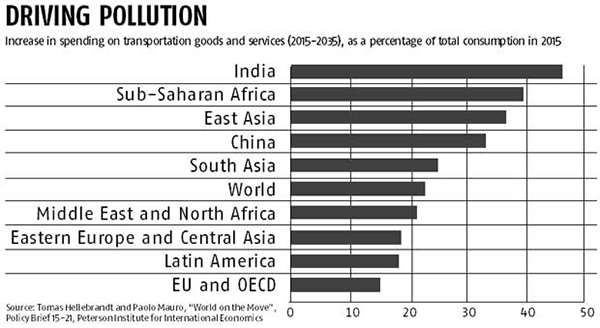 Notwithstanding this year's recession in Brazil and Russia and a possible slowdown in China's economy, the emerging economies will be the main engines of global growth during the next 20 years. Beyond technological catch-up, expanding populations will foster rising spending power in India, parts of Southeast Asia, and especially Sub-Saharan Africa, which will account for almost half of net global growth of the working-age population over that period. Despite the onset of population aging in China, household spending will expand further as growth shifts from exports, investment, and industrial production to a model based on private consumption and the service sector.

Household surveys show the share of spending on transportation—an energy-intensive category—rises as incomes grow. This universal regularity holds across cultures—not unlike the well-known "Engel curve," whereby the share of food in total consumption declines as individuals become more affluent. Put this result together with information on income distribution as well as consensus projections of economic growth and population for most countries in the world, and it becomes clear that hundreds of millions of people in emerging economies are on the cusp of being able to afford a car or to travel internationally for the first time.

Thus far, both public discourse and policy measures have emphasized production-related emissions. The image in the public's mind is that of a polluting coal-plant in an emerging economy powering the production of manufactures destined for advanced economies. That image needs to be complemented by the prospect of growing numbers of emerging-market consumers driving a car or traveling internationally by air. This is a welcome and natural part of the development process, but its sheer scale will present policy challenges, not least with respect to climate change.

From the perspective of advanced economies, these results point to the need for greater policy emphasis on three areas. First, higher carbon taxation and lower subsidies for fuel and energy, to discourage emissions, and to raise proceeds for research and development of green technologies. Second, international air travel, which was not covered by Kyoto emission limits, and where higher taxation or inclusion in emission limits will be needed in light of projected rapid growth in the next two decades. Third, climate-friendly choices in infrastructure to meet new demand for transportation; in this regard, the priorities are incentives from international financial institutions (including new ones, such as the Asian Infrastructure Investment Bank) and internationally open procurement of infrastructure projects, to ensure that the most efficient technologies are used worldwide. Similarly, all export credit agencies should not only stop funding new coal plants (unless they have capture and storage technology), but also give financial incentives for choosing climate-friendly infrastructure, including in the transportation sector.

More generally, the advanced economies must be mindful that they developed at a time when the harmful effects of carbon emissions were not known, whereas today's low-income and emerging economies need to develop under more challenging circumstances and to adapt to a changing climate. It is not only economically sensible but also morally fair for the advanced economies to contribute generously to efforts such as a global climate adaptation fund and the public funding for a global research and development program to reduce the cost of renewable energy.

Although the developing world's prowess in production manifestly underlies its rising affluence, policymakers must not lose sight of the implications of such affluence for greater consumption and for meeting universal human desires to travel, leading to excessive carbon emissions unless serious action is taken.