How important are policy barriers to trade? Historically, this question has been difficult to answer because, as noted by Anderson and van Wincoop (2004), "[t]he grossly incomplete and inaccurate information on policy barriers available to researchers [was] a scandal and a puzzle."

The recent literature assessing the effect of trade policy on trade flows can be divided between the econometric analyses of the gravity model, surveyed by Head and Mayer (2014), and evaluation of calibrated quantitative trade models, summarized by Costinot and Rodriguez-Clare (2014). Both approaches seek to understand bilateral trade flows, and they both use aggregated summary measures of trade policy. We argue that future research could be enriched by incorporating micro-level data on trade policy from a number of newly available sources.

To facilitate new research directions, we survey a number of relatively new databases regarding different trade policies for 31 economies that represented 83 percent of the world's population and 91% of the world's GDP in 2013 (Bown and Crowley, forthcoming). We document the extent of cross-sectional heterogeneity in applied commercial policy across countries, their economic sectors, and their trading partners, over time. We address five questions about contemporary trade policy: (1) Do some countries have more liberal trading regimes than others? (2) Within countries, which industries receive the most import protection? (3) How do trade policies change over time? (4) Do countries discriminate among their trading partners when setting trade policy? (5) How liberalized is world trade?

Here we focus on the first two questions.

Do some countries have more liberal trading regimes than others?

Within countries, which industries receive the most import protection?

We use this question to showcase the important nuances captured by different trade policies. The answer depends not only on the country, but also on the trade policies examined within a country.

For each country-group and industrial sector pair, we report two measures of tariffs. The first is the average applied MFN tariff; this is the rate imposed on most imports. The second measure, represented by the grey-shadowed bars, is the average of the tariff commitment for each group of countries, i.e., the average of the maximum tariff rate permitted under the World Trade Organization (WTO).2 The difference between the average tariff commitment and average applied rate captures some of the inherent trade policy uncertainty for each group of countries in 2013. Figure 1 illustrates a number of relatively clear patterns. 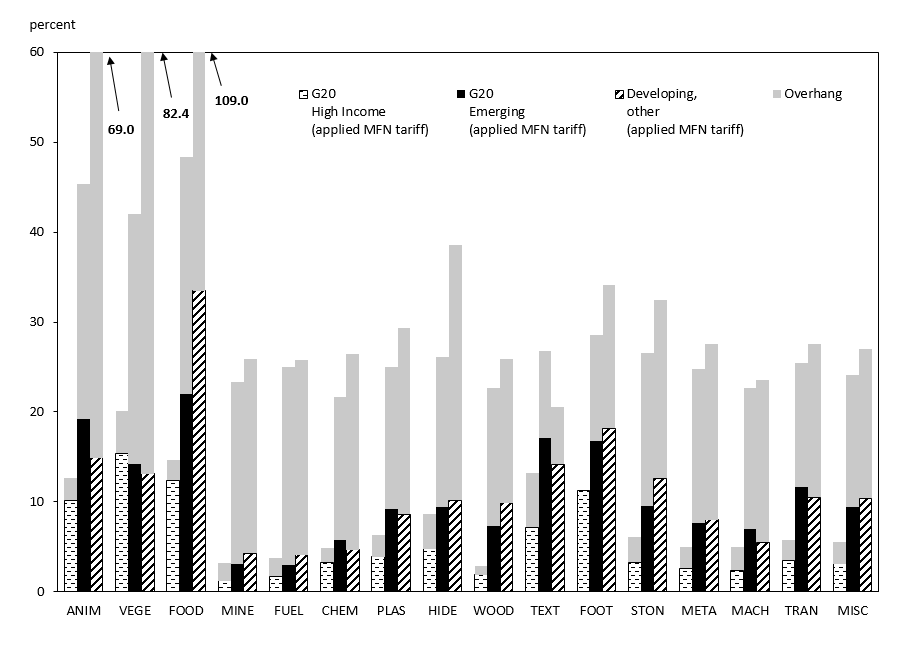 Second, agricultural products and foodstuffs are protected almost everywhere, regardless of a country's level of development. Within manufacturing, textiles, apparel and footwear are more protected than other industrial goods. Minerals and fuels tend to face few import barriers.

In sharp contrast, there are large differences between the average tariff commitment and the average applied tariff for emerging and developing countries across all sectors. This difference, referred to as ‘tariff overhang,’ means that most of these economies have considerable ‘policy space’ to raise their import tariffs while maintaining their international commitments to the WTO.3

Figure 1 thus illustrates why an empirical study of trade policy that is limited to applied tariff rates at a particular moment in time could be misleading. The cross-country differences in tariff commitments are considerably larger than differences in applied tariffs. If firms that consider entering a foreign market care about the expected future tariff rate, how should they form that expectation? These data suggest that exporters to emerging and developing economies face considerably more uncertainty regarding future import tariffs than they face in exporting to high income economies.

A number of recent studies have examined how trade agreements and policies that reduce trade policy uncertainty impact exports and firm-level investments (Handley and Limão 2015a, Handley 2014). Further, a growing literature analyses the effect of the `China shock,’ that is, China’s unprecedented export growth in the 2000s, on output and employment growth in U.S. import-competing sectors (Handley and Limão 2015b, Pierce and Schott forthcoming, Autor et al. 2013, 2016). This research is implicitly tied to the reduction in trade policy uncertainty facing Chinese exporters that came about when China joined the WTO.

Evaluating the sector-level variation in import protection becomes much more complicated once we look beyond tariffs. Temporary trade barriers (TTBs) are import restrictions permitted under the WTO’s numerous contingency clauses; importantly, these import restrictions are not captured by the summary data on tariffs in figure 1. Given that countries apply these TTBs in many forms—e.g. as ad valorem tariffs, specific tariffs, quantitative restrictions, or ‘voluntary’ agreements to raise export prices—we measure their use with the import coverage ratio. This is defined as the share of imported products within each sector over which the country imposed a TTB between 1995 and 2013.

Figure 2 Import products with an imposed temporary trade barrier in effect over 1995-2013, by policy-imposing economy and industry 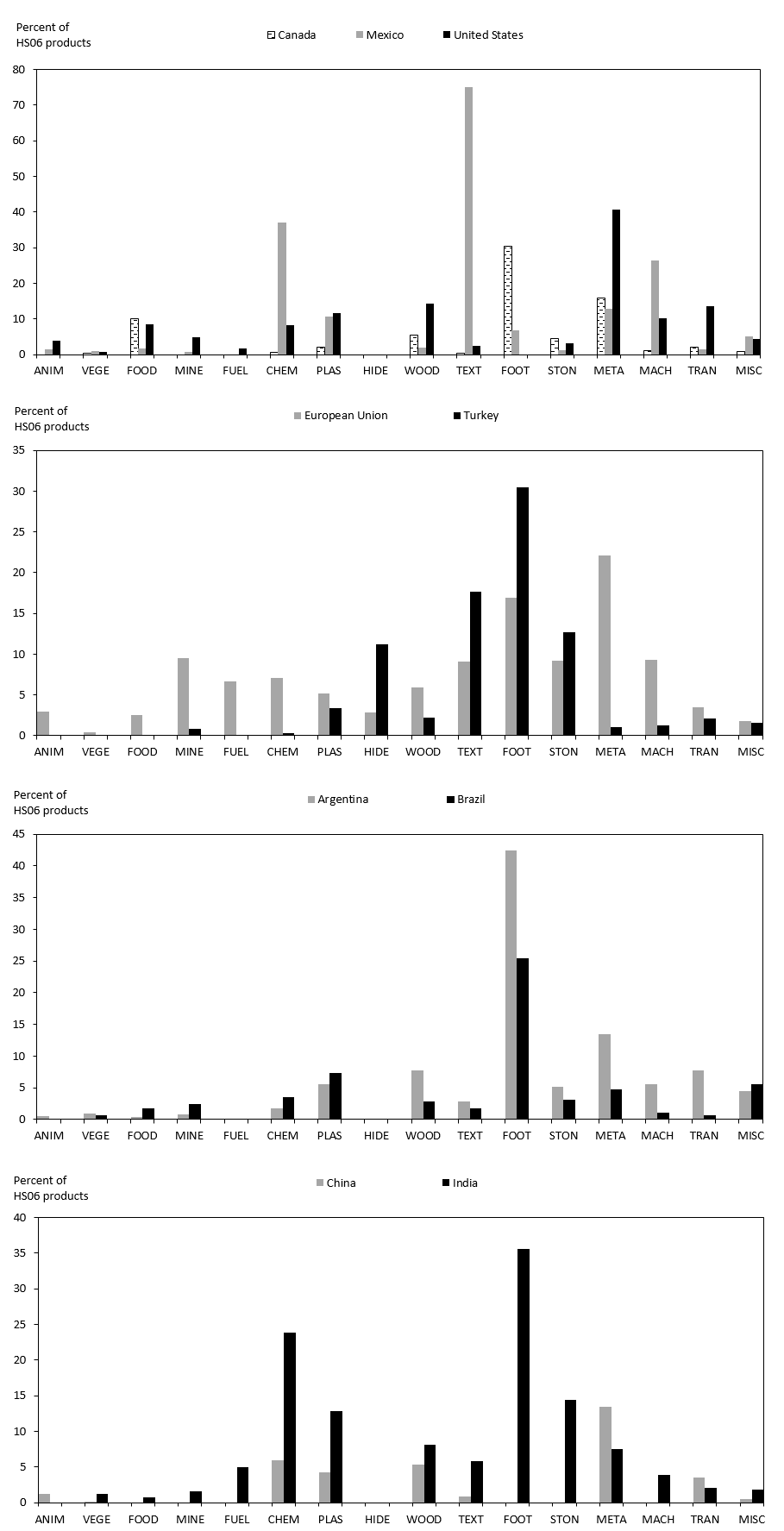 Now compare figure 2 with figure 1. In general, figure 1 revealed that all three types of countries tended to apply low tariffs in chemicals, plastics, metals and steel, and machinery. However, figure 2 indicates that both high income and emerging economies frequently use TTBs to restrict a large share of imports in these same sectors. Again, this implies that an analysis of exporters’ responsiveness to trade policy that relies on the applied MFN tariff rate would miss much of the policy variability that exists in the real world.

Finally, to tie this back to the China shock, consider figure 3. Figure 3 presents information on exporters facing temporary trade barriers (TTBs) in G-20 markets in 2013. The graph displays data for the 10 exporting countries that faced the most TTBs. The left axis presents the value of exports (billions of US dollars) for products facing G-20-imposed TTBs, and the right axis presents the share of the country’s total exports to the G-20 facing G-20-imposed TTBs.

Not surprisingly, figure 3 indicates that China is the top export target of TTBs, with an estimated $100 billion in exports subject to G-20-imposed import restrictions in 2013. This is more than 7 times larger than the second most-targeted exporting country, South Korea, at $14 billion and the third most-targeted country, the United States, at $12.6 billion. Alternatively, more than 7 percent of China’s total exports to the G-20 markets were subject to foreign-imposed TTBs in 2013, as compared to roughly 4 percent of Korea’s exports and only 1 percent of US exports.

In terms of policy, figure 3 documents that while China’s WTO membership in 2001 gave China almost duty-free access in many markets, the US and other G-20 economies subsequently restricted this market access through the imposition of TTBs—and antidumping in particular—on imports from China.4

One potentially fruitful path for the literature on the China shock and trade policy uncertainty would be to exploit the considerable variation in TTB import protection across products and time. Researchers can use this data to push beyond the US import experience of the 2000s and examine the impact of the China shock on other importing countries. Many emerging markets also used TTBs to address increased imports from China during this period; some did so even more intensively than the United States (Bown 2013).

The days in which research could rely on applied import tariffs alone to capture the critical variation in trade policy are probably drawing to a close. Governments currently use a multitude of policy tools to restrict imports at the border that are not captured by summary statistics on applied tariff rates. However, the opportunities to examine responses to trade policy changes are growing—databases of highly detailed product- and partner-specific trade policies are now available to researchers.

1. The G-20 high-income economies are Australia, Canada, the European Union, Japan, Korea, Saudi Arabia, and the United States. The G-20 emerging economies are Argentina, Brazil, China, India, Indonesia, Mexico, Russia, South Africa, and Turkey. The other developing countries are those that each have populations in excess of 40 million.

3. Notably, the exceptions, which have quite stringent tariff commitments, are emerging economies which began the process for joining the WTO after 1996, including China, Russia, Vietnam and Ukraine.

4. For example, Bown and Crowley (2016, table 6) find that only 3.3% of China’s exports to Australia, Canada, the European Union, and the United States were subject to TTBs in 1995. The growth in import restrictions against Chinese exports over time is at least partly due to increased restrictions in emerging economies.

Handley, Kyle, and Nuno Limão (2015b) “Policy Uncertainty, Trade and Welfare: Theory and Evidence for China and the U.S." Mimeograph, University of Maryland.