In Search of Consensus on Climate-Conflict Links

© New Security Beat. Blog of the Environmental Change and Security Program of the Woodrow Wilson International Center for Scholars.

What do we (think we) know about the links between climate change and armed conflict? Early attempts to theorize what climate-related conflict might look like were exceptionally successful in sparking policymaker interest in and funding of research on climate-conflict links. But they were more like works of science fiction than science. Since then, research on climate-conflict links has exploded, with hundreds of articles and working papers published on the subject. Moreover, the findings have been all over the map, with some arguing for strong impacts of climate on conflict at multiple temporal and spatial scales, while others argue—in both specific instances, about the supposedly climate-fueled Syrian Civil War, and more generally—that climate-conflict links are overstated.

Faced with such a large, seemingly conflicting body of evidence, what is a policymaker to do? Thankfully, a recently published study in Nature helps to provide a consensus answer regarding the links between climate change and armed conflict to date, as well as what experts think of climate change's potential to contribute to armed conflict in the future. The study, led by Katharine Mach of the Stanford Woods Institute for the Environment, is important not just for what it says but how it was conducted, and it provides a useful template for thinking more broadly about the uncertain human impacts of climate change.

As a quagmire of competing findings and arcane disagreements, the debate over climate-conflict links is hardly unique. Traditional scientific discourse, which normally consists of scholars hashing out their differences in scientific journals—and whose pace makes 18th century correspondence chess seem like high-frequency trading—focuses attention on areas of disagreement. Two scholars might agree on most of the evidence in front of them, but it would be the loud disagreement over the remaining 3 percent that would grab the headlines. This problem is accentuated by the most prestigious general science journals, which want strongly-stated, unambiguous findings (and titles). So, you get exchanges like this, between a team led by Marshall Burke and Halvard Buhaug in the pages of Proceedings of the National Academy of Sciences: 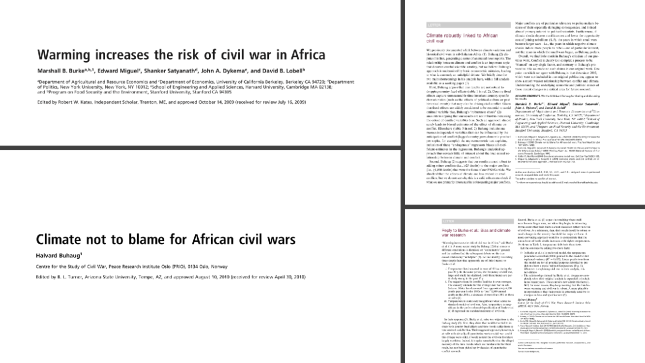 This discourse can be useful, and even entertaining, for specialists working in the area, who benefit from identifying areas for further research, new data sources, and new analytic techniques. But imagine being a non-specialist and trying to navigate this debate. Then add in other perspectives that use different types of data, different techniques, etc. The picture gets murky fast.

It's precisely in such circumstances, characterized by disparate evidence, lack of evident consensus, and fundamental uncertainty about the future, that expert elicitation, a process led by Katharine Mach, is so useful. In this instance, Mach and her collaborator, Carolien Kraan, empaneled 11 experts on climate-conflict links (including us), interviewed each extensively, then brought them together in Palo Alto to generate a consensus statement about: 1) links between armed conflict and climate in the past, 2) expected links in the future, and 3) outstanding areas of disagreement. Notably, the experts included several, like Burke and Buhaug, who had been most vociferous in their past disagreements.

What did the study conclude? After 900+ pages of interview notes and countless hours of sifting through interviews, it concluded that climate has already increased the risk of armed conflict, but the effect is small relative to those of other factors such as low socioeconomic development, weak state capacity, unexpected economic shocks, and social polarization—the main drivers of armed conflict. Experts still differed in their assessments of climate's contribution to past conflict risk, however (See Figure 1, reprinted from Mach et al. 2019). Some put it as high as 20 percent, while others as low as 2-3 percent. 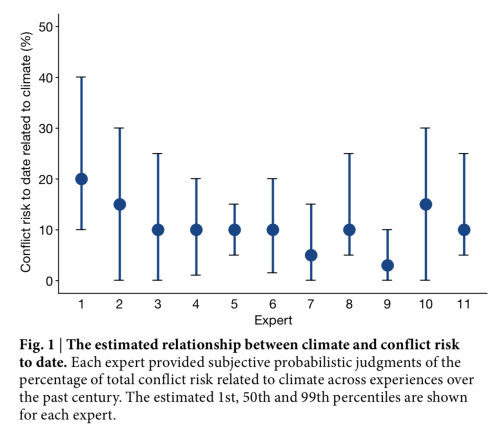 Under a business-as-usual four-degree warming scenario (the trajectory we are on now), the risk of climate-related conflict would increase five-fold in the future relative to current risk levels. This does not mean that every (or even any one) potential conflict situation would become 25 percent more likely, but rather that climate change is "loading the dice," making conflict somewhat more likely across a host of contexts. Most of the findings from which this consensus emerged are probabilistic, rather than deterministic, in nature.

Now, this may not come as a shock to many. Indeed, the conclusion may strike some as conservative. But the elicitation process matters as much as the outcome. In the face of competing lines of evidence, complex interdependencies, and disagreement among researchers, some important points of agreement nevertheless emerged—both about what we know and what we don't (i.e., potential future areas for research). Some of these include better identifying the sociopolitical and economic contexts in which we expect climate to matter more than in others, assessing effects on distinct phases of conflict (outbreak vs. continuation vs. resolution), understanding specific causal pathways between environmental, resource, and human factors, and understanding why these relationships change across a variety of contexts.

Elicitation is not a panacea: For all its merits, it is, like most consensus-driven processes, highly dependent on which voices make it into the room. Some have criticized this approach for excluding non-positivist, more dialectic approaches, and voices and perspectives from the Global South were notably absent. In the future, efforts to identify consensus will benefit from both advances in data, theory, and methods, but also from more broadly inclusive discussion.

Given the fundamental uncertainties surrounding many of the important effects of climate change for human systems—which dwarf most physical ones in their complexity—expert elicitation may be a way of helping both the scientific and policy communities around climate change to move forward with more confidence.