On October 1, Prime Minister Shinzo Abe’s government raised the consumption tax from 8 percent to 10 percent. Our preference would have been that he not do it. We believe that, given the current Japanese economic situation, there is a strong case for continuing to run potentially large budget deficits, even if this implies, for the time being, little or no reduction in the ratio of debt to GDP.

Our argument is a simple one: Japan is suffering from a strong case of secular stagnation, in which domestic private demand is too weak to sustain full employment without the help of fiscal and monetary policy. Why private demand is so weak is still controversial, but it is clear that one major factor is the declining population and the associated high private saving rate; this factor will remain relevant for a long time to come. Monetary policy has done everything it could, from QE to negative rates, but it turns out it is not enough. In this context, the case for using fiscal policy to prop demand is a strong one. Very low interest rates, current and prospective, imply that both the fiscal and economic costs of debt are low. And the benefits of public deficits, namely higher activity, are high. 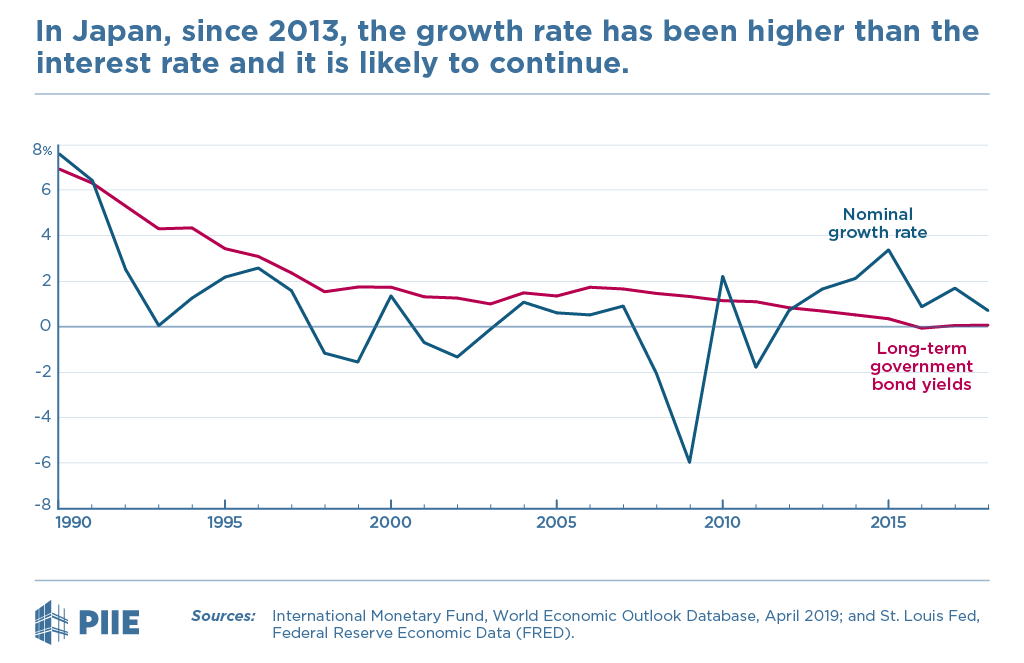 Turn to economic costs. The traditional analysis points to crowding out of capital as the main economic cost of public debt. Higher debt displaces capital in portfolios, leading to less capital accumulation and thus to less output in the future. When the interest rate is less than the growth rate however, and there are sharp limits on what monetary policy can do, this conclusion again does not follow. First the fact that investors are willing to hold public debt at such a low interest rate is a signal that they do not find the alternative, namely holding stocks and getting the risk-adjusted return to capital, very attractive. But, if the risk-adjusted return to capital is low, then having less capital is not very costly. Second, there may actually be no crowding out of capital: If larger budget deficits increase demand and increase output, they may also increase rather than decrease investment. Both factors are relevant for Japan. The economic costs of debt may therefore be quite small.

Now comes an important caveat: To the extent that higher public spending is needed to sustain demand in the short run, it should be used to strengthen the supply side in the long run. We believe that, given the low interest rates and the challenges ahead, there are many projects whose risk-adjusted social rate of return exceeds the rate at which the Japanese government can borrow, such as raising the fertility rate and tackling climate change. As the shrinking population yields enormous fiscal pressure and is a major source of pervasive pessimism about the future, publicly funded human capital investment would be particularly effective for Japan. Raising the fertility rate by providing childcare and active family policies would bring double dividends: increasing demand in the short-run and easing fiscal pressure in the long-run as the sustainability of social security depends on future population growth.

Is the case for sustained budget deficits open and closed? When arguing the case, we have encountered two major objections:

The first objection is that the presence of labor shortages suggests that output is already above potential and that deficits could be decreased without creating an undue slowdown. It is always difficult to assess whether output is slightly above or below potential, and we do not take a stand on the issue, but we believe our argument holds no matter what the exact value of the current output gap. If the output gap is negative, that is if output is below potential, our argument goes through straightforwardly: Deficits reduce the output gap and this is desirable. If output is instead above potential, a further increase in demand may translate partly or mostly into higher inflation. At this juncture however, given that inflation is below the BOJ target, higher inflation would be good: It would both increase the credibility of monetary policy, and it would allow for lower real (inflation adjusted) interest rates, giving the BOJ more room to use monetary policy—and eventually decreasing the pressure of having to rely on fiscal policy to increase demand.

The second objection is that interest rates may increase, leading to much higher costs of debt. Even if debt service is low today, the levels of debt are indeed high, and one indeed must worry about what would happen if, for some reason, interest rates went up substantially. How should such an unlikely but not inconceivable scenario affect fiscal policy today? There are three parts to the answer. The first is that the government can largely eliminate the risk by issuing long maturity bonds and locking in long term financing at rates close to zero. The second is that, to the extent that this increase in interest rates reflects a change in underlying fundamentals, it is likely to happen slowly over time. If so, fiscal policy will have time to react and reduce deficits, and monetary policy will have plenty of room to decrease rates and offset the adverse effects of consolidation. The third is that, to the extent that the increase in interest rates reflects liquidity rather than solvency concerns, then indeed the central bank can largely eliminate that risk by committing to intervene and peg short- and long-term rates, a commitment that the BOJ has actually already made.

In short, we believe that, in the current Japanese environment, the focus should be on maintaining growth rather than decreasing budget deficits and debt. The benefits of budget deficits, both in sustaining demand in the short run and improving supply in the long run are substantial. And the costs of public debt are limited.