Three weeks is a long time in economics. In his autumn statement on December 3, UK Chancellor George Osborne presented "a forecast that shows the United Kingdom is the fastest-growing of any major advanced economy in the world." He boasted: "A year ago, we expected GDP to grow by 2.4 percent. In March we expected 2.7 percent. Today, the British economy is forecast to grow by 3 percent. And the growth we are now seeing is more balanced. Manufacturing is growing faster than any other sector; and investment is set to be up 11 percent this year."

Now all of those claims are in tatters. First, there were the data revisions to GDP. Growth in the most recent quarter was left unrevised at 0.7 percent, but growth in each of the previous three quarters was revised down by 0.1 percent, and the two before that were revised down by 0.2 percent each. For the Chancellor's claim that growth in 2014 will be 3 percent to be true requires growth in the fourth quarter of 2.2 percent, which, of course, won't happen. So bang goes that claim. 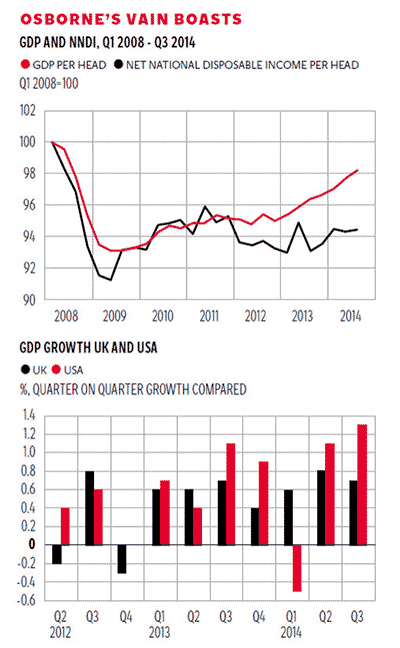 Manufacturing growth has slowed sharply, down from 1.1 percent in the first quarter of 2014, to 0.5 percent in Q2, to 0.3 percent in Q3. Services grew by 0.8 percent, so manufacturing isn't growing faster than any other sector.

There were also downward revisions to business investment. The trade balance deficit widened from £10.9 billion in Q2 2014 to £11.8 billion in Q3 2014, and as a result the United Kingdom's current account was in deficit by £27 billion in the July–September quarter. At 6 percent of GDP, the current account deficit is now higher than it was at the end of the 1980s, its previous peak. The remaining three of the Chancellor's boasts bite the dust.

The ONS also released new data on economic well-being, which suggested that the UK economy is not going to be the electoral asset the Tories had hoped. The ONS presented evidence on three other indicators for Q3 2014, two of which are plotted in the second chart. First, GDP per head increased 0.6 percent compared to Q2 2014. This is lower than the 0.7 percent growth in GDP because of population increase. GDP per head remains 1.8 percent below pre-economic downturn levels. Second, Net National Disposable Income (NNDI) per head, which represents the income for UK residents, has remained broadly flat since Q1 2012 and is still 5.6 percent below pre-economic downturn levels.

The ONS notes that not all income generated by production in the United Kingdom will be payable to UK residents. Some of the capital employed will be owned by nonresidents, and they will be entitled to the return on that investment. Conversely, the United Kingdom's residents receive income from production activities taking place elsewhere, based on their investments overseas. Adjusting for these flows gives a measure that is better focused on income rather than production.

Second, it can be adjusted for capital consumption. GDP is "gross" in the sense that it does not adjust for capital depreciation-that is to say, the day-to-day wear-and-tear on vehicles, machinery, buildings, and other fixed capital used in the productive process. It treats such consumption of capital as no different from any other form of consumption. But as the ONS rightly notes, most people would not regard depreciation as adding to their material well-being. Hence the need for NNDI.

Third, in Q3 2014, household income (RHDI) per head decreased 0.2 percent on the quarter. Fourth, in Q3 2014 real household spending per head grew 0.8 percent compared to the previous quarter. It remains 3.1 percent below its pre-economic downturn levels. This is despite real household incomes per head remaining broadly around their pre-economic downturn levels. Fifth, the ONS also provided data for 2012–13, which is the most recent data available, for median income, which fell 1.4 percent compared to 2011–12, to £23,300, its lowest level since 2002–03. Sixth, between 2011–12 and 2012–13, the ONS noted that there was a slight increase in income inequality. When the ratio of total income received by the richest fifth of households to that received by the poorest fifth is examined, it turns out that between 2011–12 and 2012–13 this ratio saw a small increase from 5.1 to 5.3, suggesting a slight increase in income inequality. The ONS suggests there were two reasons for the increase in this ratio: The income of the poorest fifth declined by 3.3 percent; in addition the income of the richest fifth increased by 1.6 percent. This is contrary to the trend seen between 2007–08 and 2011–12, which saw continued decreases in the ratio.

So the United Kingdom isn't the fastest-growing advanced economy. Manufacturing isn't growing faster than any other sector, and business investment is falling. The current account deficit is larger than it has been for 30 years. There is absolutely no evidence of any rebalancing to exports or manufacturing. GDP per capita still hasn't returned to pre-recession levels, and inequality is rising.

So much for entering the general election with a nicely booming economy and rising living standards. Robert Burns was right: "The best laid schemes of mice and men, often go awry."