Brazil's inordinately high interest rates have long been a cause of much perplexity. Following the economic stabilization of the mid-1990s, and the adherence to inflation targeting, fiscal responsibility, and floating exchange rates in the 2000s, most people expected Brazilian interest rates to converge to emerging-market benchmarks by the end of the decade.

Brazil's state-owned bank has evolved into an institution that provides long-term credit to very large and profitable companies, helping to perpetuate a cycle of high interest rates and relatively low investment rates.

Brazilian real interest rates did decline from 9 percent in the early 2000s to about 5.5 percent in 2010. However, they remained substantially higher than the emerging market average.

An attempt to address this anomaly was staged by the Central Bank of Brazil in 2011. Between 2011 and 2013, Brazil's monetary authority slashed nominal rates by more than 500 basis points in an effort to stave off fallout from the global financial crisis and "reset" interest rates at much lower levels.

The attempt failed, and Brazil continues to grapple with both high nominal and real interest rates.

With inflation running close to 9 percent per year and expectations that it may increase in the coming months, there is little hope that Brazilian interest rates will fall to "normal" levels. Real interest rates—the difference between nominal rates and inflation expectations for the next 12 months—are back at 6 percent, the level that prevailed just before the substantial monetary easing of 2011.

Many explanations have been put forth for Brazil's high rates, and some have undergone great scrutiny, such as the hypothesis that low savings rates perpetuate a cycle of high financing costs, depressed investment, and low growth. Although the role of public banks, particularly the state-owned development bank BNDES, have been cited as additional causes for high interest rates in Brazil, there is scant evidence backing these arguments.

Public banks in Brazil account for over 50 percent of the credit market, while BNDES alone accounts for more than 20 percent. Unlike other public banks, the state-owned development bank lends exclusively on a subsidized basis. Its rates are directly linked to Brazil's long-term financing rate, TJLP, which is set by the National Monetary Council every three months. Hence, BNDES' rates are not market-determined.

There are two ways by which BNDES creates perverse credit market distortions. On the one hand, segmentation caused by substantial amounts of subsidized lending weakens monetary policy transmission channels, effectively undermining the Central Bank's inflation fighting efforts. On the other hand, BNDES' ample presence—particularly its focus on large firms that are not cash-constrained and are thus able to finance themselves in private credit markets—leads to adverse selection. 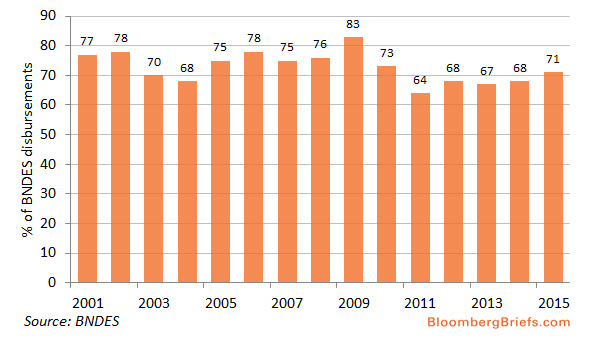 Resolving these issues would require a significant reduction in BNDES lending, as well as a thorough overhaul of its operations. The timing, however, could not be less favorable: Brazil is on the brink of a deep recession, and private sector credit is shrinking.

In the absence of other instruments for long-term credit, scaling back the bank's lending operations would imply a lack of resources for programs such as the recently announced plan to revamp infrastructure. Finally, large companies that have benefited from subsidized lending would be loath to give it up.

Brazil's state-owned bank was founded in 1952 with the explicit mandate to provide long-term credit to infrastructure projects. It has since evolved into an institution that provides long-term credit to very large and profitable companies, helping to perpetuate a cycle of high interest rates and relatively low investment rates. The time has come to rethink its role.

The Impact of the Volcker Rule on Job Creators

Financial Reform after the Crisis: An Early Assessment