President Donald Trump wants to win approval this year of the United States-Mexico-Canada Agreement (USMCA) signed in November 2018. Like its predecessor, the North American Free Trade Agreement (NAFTA), which was approved in 1993, the USMCA can probably count on solid Republican support in a Democrat-controlled House of Representatives. Whether the Democrats will supply the necessary majority is an open question.

An examination of congressional districts dependent on exports to Mexico and Canada suggests that the votes might just be there to put USMCA over the top. Several Democrats represent districts heavily reliant on exports to Canada and/or Mexico, and they might deviate from the party’s anti-USMCA position and vote for the agreement, alongside nearly all Republican representatives. But the critical question remains whether Speaker Nancy Pelosi (D-CA) will allow a floor vote. 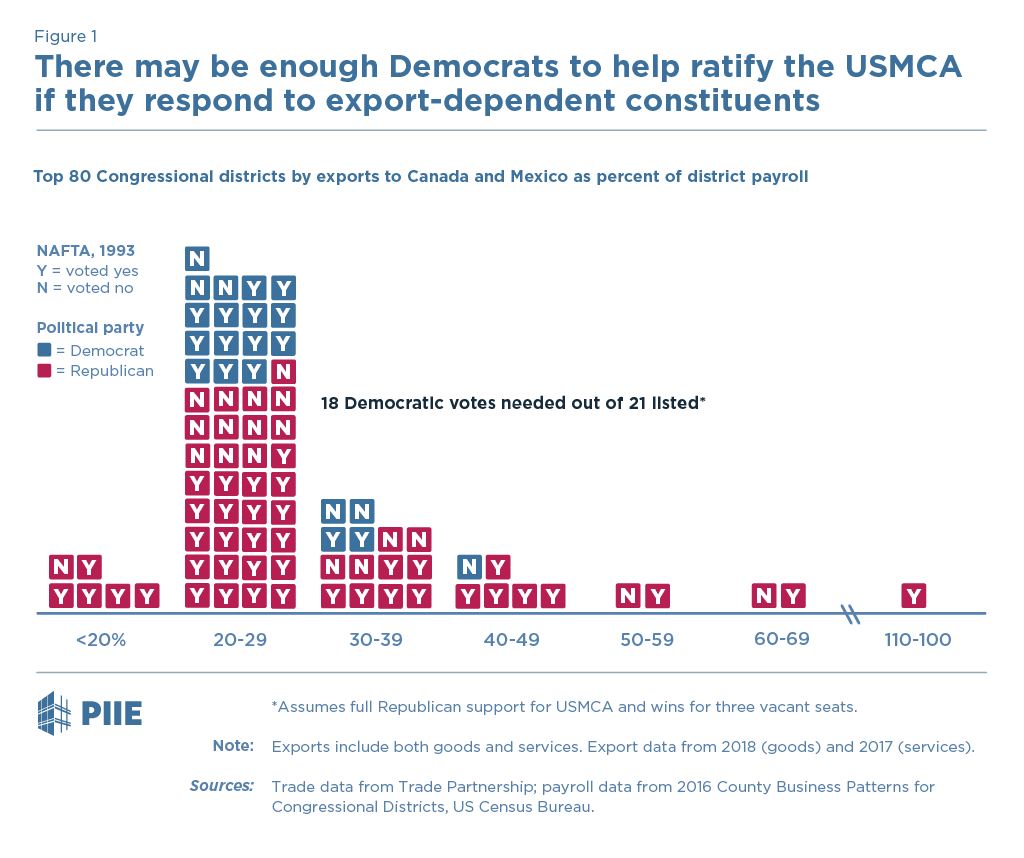 Kevin Hassett, chairman of the Council of Economic Advisors, claimed in an interview with Fox Business on April 10 that a vast congressional majority favors the USMCA. He may be right, but he is probably wrong to count on something “vast.” 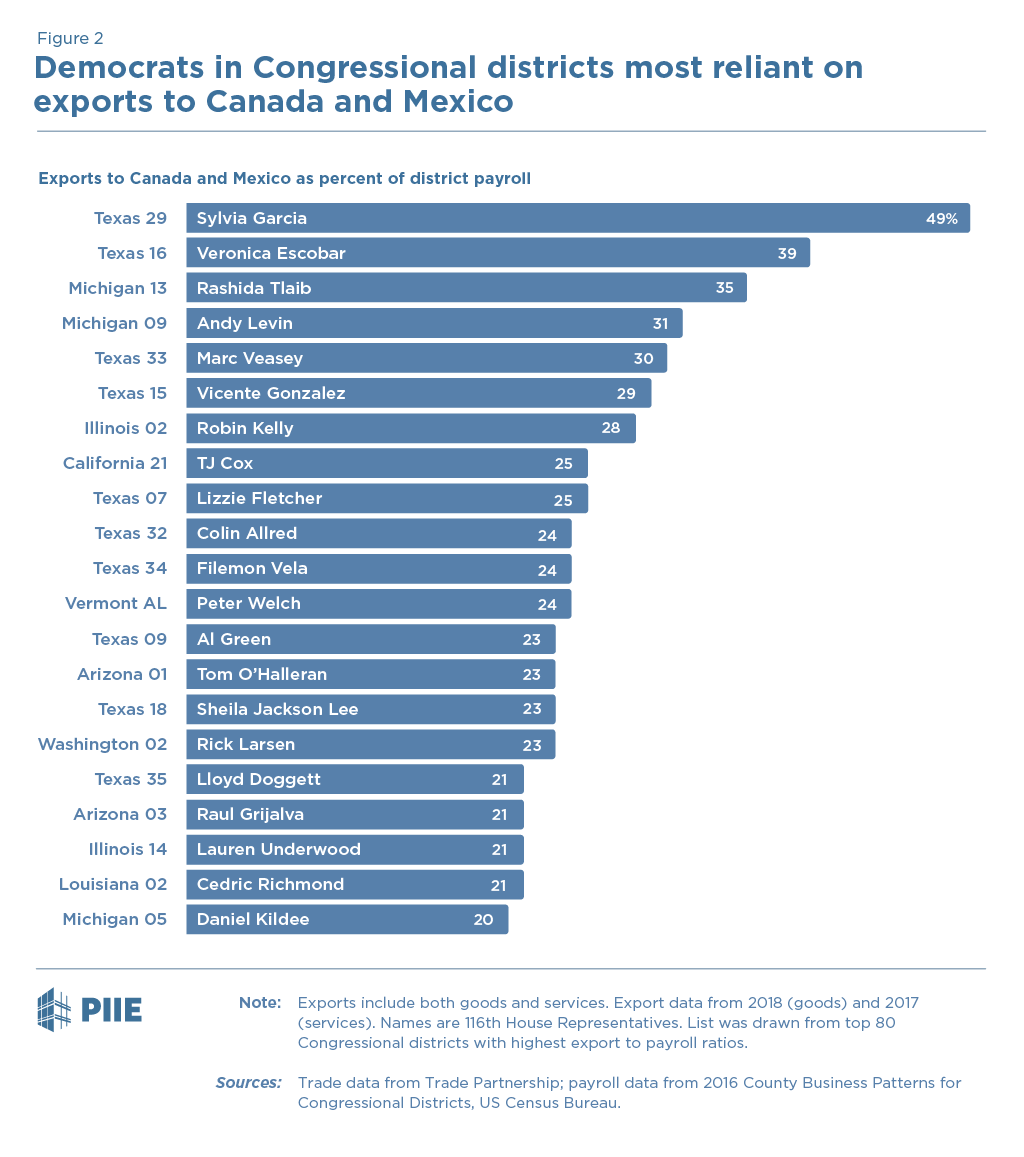 More than 25 years ago, NAFTA won in the House with 75 percent of Republicans, but just 40 percent of Democrats, voting yes. This year, following the 2018 mid-term election, the Democratic majority in the House stands at 235 to 197 (with 3 seats vacant). Ratifying the USMCA, with all seats filled, will require 218 affirmative votes. Assuming Republicans win all three vacant seats, and assuming all Republicans vote for USMCA, that still leaves the pact 18 votes short of a simple majority.

Leading Democrats have expressed dissatisfaction with the USMCA text negotiated by Ambassador Robert Lighthizer. They cite weak labor and environmental provisions, drug provisions that they say are too favorable to Big Pharma, and unsatisfactory enforcement mechanisms. Meanwhile, the political reality is that whatever the merits of the case, Democrats are not eager to hand President Trump a negotiating victory that he can take to the polls in 2020, at least not without getting significant concessions in return.

A wild card in the mix is Trump’s habit of bluster and unorthodox negotiating tactics. Trump has threatened to terminate the existing NAFTA if USMCA is not ratified. That prospect should cause acute discomfort in congressional districts that rely heavily on exports to Canada and/or Mexico. NAFTA termination would not end those exports, but it would dampen sales if Canada and Mexico resurrected their pre-1994 tariff and nontariff barriers against US commerce. Many US exporters would lay off workers. Estimates indicate that the United States would lose 187,000 exporting jobs if Trump withdraws from both NAFTA and its precursor (still in force), the Canada-United States Free Trade Agreement. Some might blame Trump for the disruption, but in turn he might be able to blame recalcitrant Democrats who either vote against the USMCA or refuse to hold a vote. Whatever the national political fallout, House members who represent severely affected districts might face an uphill fight in the 2020 election.

With that political logic, we have tried to identify congressional districts most dependent on exports either to Canada or Mexico or to both. Democratic representatives for those districts seem most likely to break from the anti-USMCA ideology of their political leaders and instead vote for the pocketbook interests of their constituents. We investigate whether there are more than 18 Democratic House members whose constituent interests point strongly to an affirmative USMCA vote.

The first tab of table 1 identifies the 80 congressional districts with the highest share of exports of goods (in 2018) and services (in 2017) to Canada, expressed as a percent of total payroll paid by firms in the district. Export data by congressional districts are derived from a proprietary dataset supplied by the Trade Partnership. Congressional payroll data come from the US Census Bureau.[1] Not surprisingly, exposed districts are concentrated in northern and industrial states, reflecting the role of proximity and supply chains in US-Canada trade (especially autos and parts). The exposure in these 80 districts ranges from 9.2 to 65 percent of district total payroll. Nine percent represents a significant threshold. Democrats represent 19 of the 80 most Canada-exposed districts, while Republicans represent the other 61. Constituent economic interests suggest that these 19 Democrats should be strongly inclined to vote for the USMCA based on ties with Canada.

The second tab of table 1 identifies the 80 congressional districts with the highest share of exports of goods (in 2018) and services (in 2017) to Mexico, again expressed as a percent of total payroll paid by firms in the district. These districts are concentrated in southern and agricultural states, but with significant industrial state representation. The ties reflect proximity, large Mexican purchases of US agricultural products, and automotive supply chains. Democrats represent 30 of the 80 most Mexico-exposed districts and Republicans represent the other 50. Again, constituent economic interests suggest that these 30 Democrats should be strongly inclined to vote for the USMCA based on ties with Mexico.

Finally, the third tab of table 1 identifies the 80 congressional districts with the highest combined share of exports to Canada and Mexico, again expressed as a percent of total payroll paid by firms in the district. All 80 districts were identified as leading exporters to Canada and/or Mexico separately, so the combined identification confirms the findings already reported. Of the 80 most exposed districts, 21 are represented by Democrats and 59 by Republicans. All 21 Democrat districts have export/payroll ratios over 20 percent (see figure 1). Moreover, in 1993, 55 or over two-thirds of the prior occupants of the 80 exposed seats voted for NAFTA. The combination of constituent interests and political history suggests that these 21 Democrats should be strong pro-USMCA votes (see figure 2).

Analysis of constituent economic interests indicates that there might be enough Democrats to vote for the USMCA to deliver a simple majority based on pocketbook considerations of some, perhaps many, in their districts. On the other hand, some lawmakers from these districts might feel compelled to listen to opposition traditionally voiced by the labor movement, which has long complained that NAFTA and other trade agreements cause jobs to be relocated to partner countries. However, a Pew poll taken in May 2018 indicates that two-thirds of rank and file Democrats now favor trade agreements, a sharp increase from four years ago.[2] In part this may be a backlash phenomenon, since Trump, unlike past Republican presidents, has capitalized on strong antitrade rhetoric.

However, no congressional vote will be held without the assent of Speaker Pelosi. A game of chicken thus looms between her and President Trump. To force a House vote, Trump could send a letter terminating NAFTA to Canadian Prime Minister Justin Trudeau and Mexican President Andrés Manuel Lopéz Obrador. Under NAFTA Article 2205, termination would take place six months after the letter date, unless subsequently rescinded. If the termination letter is sent in the fall of 2019, actual termination would loom large in the 2020 presidential campaign. The big political question then is whether actual termination would do more damage to Trump or his Democratic rival. Terminating NAFTA, without enacting USMCA, will devastate thousands of firms and workers. It would be an economic disaster. But in the high-stakes politics of 2020, the question is not how much devastation but who gets the blame.

1. The district payroll data are from the 2016 County Business Patterns for Congressional Districts from the US Census Bureau.