Uncertainty over Auto Tariffs May Not End Soon

The author thanks Gary Clyde Hufbauer for useful discussions and feedback.

The Trump administration’s tariffs on steel and aluminum in 2018 marked the first time since 1986 that national security has been invoked as grounds for trade protection. Since then, the administration has launched three additional investigations, using the same law, Section 232 of the Trade Expansion Act of 1962, to determine whether imports of automobiles, uranium, and titanium sponge imports threaten national security. Although other countries have already brought challenges before the World Trade Organization over the United States’ extensive use of the national security exception, the issue will not be settled soon and has generated fears that others will imitate the US example.

Some observers believe that the Trade Expansion Act of 1962 “establishes a clear process and sets timelines for a Section 232 investigation.” In this view, the absence of statutory guidance on the meaning of “national security” is the only uncertainty in a Section 232 investigation, and once one is initiated, that uncertainty is bound to be resolved quickly, thanks to binding deadlines. This sanguine belief is misguided, as several tricks can extend the process and the associated uncertainty.

Let’s start with the basics of the process as described in figure 1. After receiving the secretary of commerce’s report, the president has 90 days to decide whether or not he concurs with the Commerce Department’s findings and recommendations, and then take action to “adjust the imports of an article.” Since Commerce submitted the auto report to the White House on February 17, Trump’s decision should be due by May 18, and uncertainty regarding tariffs would then be lifted.

But the last word on auto tariffs is unlikely to happen so quickly. First, the president may decide that he wants to negotiate trade agreements with the major auto exporters. In that case, the Section 232 statute provides for an additional 180 days, which would push back the decision date to November 14. 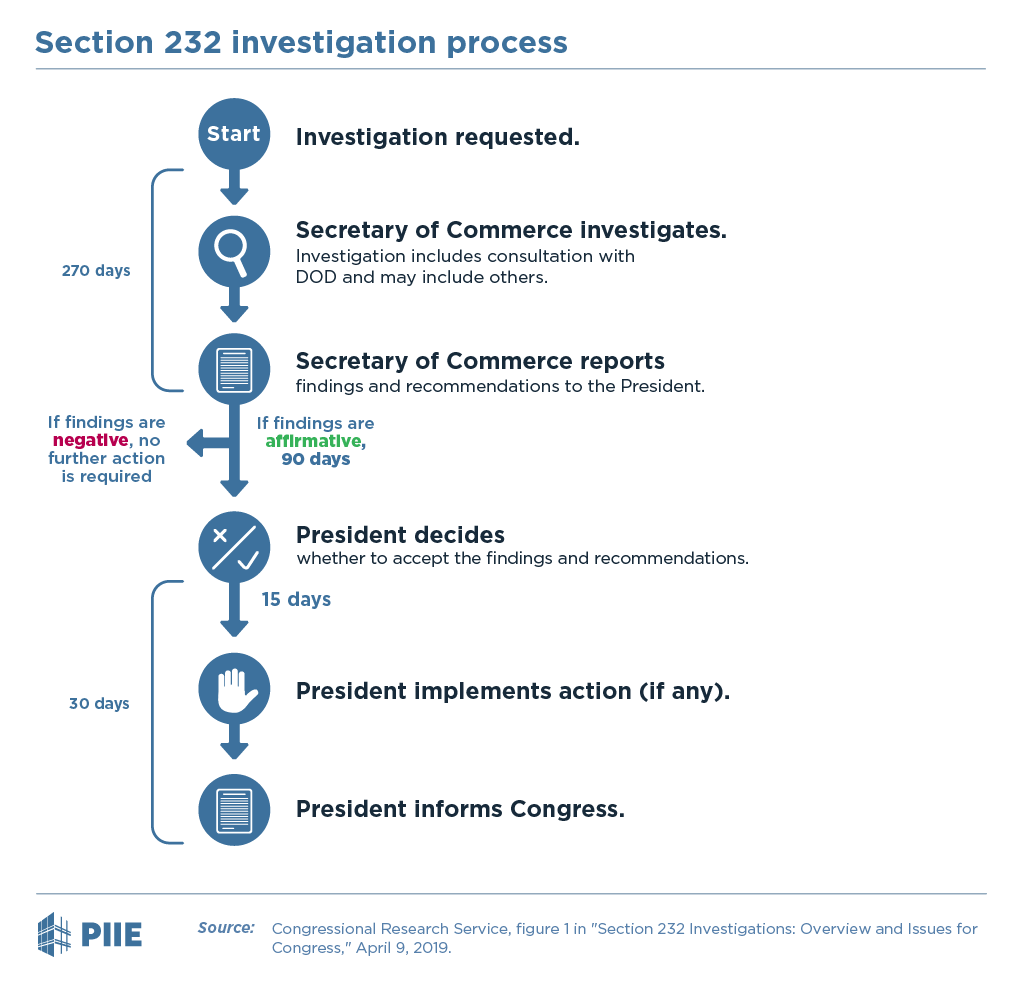 Tariff watchers are well aware of this first possibility. But they generally don’t realize that the administration has a host of other options to keep the auto threat alive much longer.

The president can, for example, ask for supplemental analysis before making a decision. President Ronald Reagan made such a request in 1988 in the investigation of the national security implications of antifriction bearing imports, which deferred the decision by 110 extra days. The president can also defer his final decision until another agency has completed a review that relates to the state of the auto industry. On March 1984, Reagan deferred his final decision in the metalworking machine tools investigation “until the National Security Council (NSC) … completed its review of United States economic requirements in war time,” delaying the decision by almost two years. Reagan then decided in May 1986 to seek voluntary export restraints with Japan, Switzerland, Taiwan, and West Germany, which further delayed action to December 1986.

The president could also take no action (or impose weaker restrictions than those recommended by Commerce) and then open a new Section 232 investigation. There is precedent to taking no trade action even when the imports investigated are found to threaten to impair national security. For three such investigations of imports of petroleum and oil products between 1987 and 1999, Commerce recommended addressing the threat through domestic measures, such as increasing production, as more effective than trade actions; the president followed those recommendations by taking no action. According to recent reports, the investigation report on autos does recommend trade remedy options to the president. In that sense, taking no action in the auto case would differ from the past cases on oil, as it would go against the secretary of commerce’s recommendation. But the Section 232 statute allows the president to ignore Commerce and choose no action or alternatively more benign or more severe actions than those recommended.

If the motivation for tariff threats on autos is to drive concessions from trading partners in ongoing bilateral negotiations, then there is little doubt that the administration will prolong the investigation. Unfortunately, it has many ways to extend this period of uncertainty.

1. On November 28, 1988, the president concluded that imports of antifriction bearings did not threaten to impair national security.

2. The administration could also use Section 201 of the Trade Act of 1974 to determine if import surges are a threat to a US industry.