Who's Winning the US-China Trade War? It’s Not the United States or China

*Note: The views and opinions expressed in this paper are those of the authors and do not necessarily reflect the official policy or position of the US Naval Academy.

The US-China trade war will leave both countries worse off in coming years, according to an analysis of current and threatened trade scenarios that is based on a global simulation model of the world economy.[1] The model employed here assumes that US tariffs will raise prices for American consumers and for producers who import intermediate inputs from China, and that Chinese tariffs will disrupt the supply chains of US exporters and producers.  Several studies and news reports indicate that these effects are already happening for American consumers and businesses.

The model projects that in the next three to five years and beyond, US and Chinese industries will adjust, diverting trade to other markets, and other countries will divert exports to US and Chinese markets to fill the void. US agriculture and manufacturing will lose, while Chinese manufacturing will gain, expanding production and trade.  In terms of aggregate welfare, which is measured by the total of all goods and services available in the economy (also known as “aggregate final demand”), both countries lose, although the magnitudes of the losses are small.[2]

By contrast, the “winners” are all other countries that benefit from shifts in markets and world prices. In addition, the analysis indicates that imposing more tariffs on China, as President Donald Trump has threatened, would exacerbate all these effects.

These main conclusions do not account for several factors that could worsen the outlook for the United States in particular. There could be shocks to various asset markets, for example, as well as increased uncertainty that suppresses investment on all sides. In addition, China has lowered tariffs on imports from countries other than the United States, a step that could inflict more harm on US exports than this model shows.

Two scenarios are considered here: The first includes the tariffs in place on $250 billion worth of imports by the United States under Section 301 of the US Trade Act of 1974, and by China on $110 billion worth of imports from the United States, which were imposed in retaliation for the Trump administration’s tariffs. This status quo (as of June 1, 2019) was confirmed at the meeting between President Trump and President Xi Jinping of China in Osaka on June 29. The second scenario adds Trump’s threatened but not yet implemented tariffs on nearly all remaining imports from China, with no further retaliation by the Chinese.[3] Trump held this threat in abeyance after his session with Xi in Osaka, but it remains a weapon Washington could wield.

Under both scenarios, US exports to China and total US exports fall.  Diversion of US exports to other markets only partially offsets the overall decline. China, on the other hand, is more successful at diverting exports to other markets, increasing its total exports. Other US trading partners are projected to divert exports to the US market, largely compensating for the loss of Chinese goods. A tiny decline in global trade occurs under the first scenario and slightly more in the second.

Both the United States and China lose welfare in both scenarios, with a larger percentage and absolute loss for China. But these losses are very small as markets adjust to the changes. All other countries gain welfare, benefitting from diversion of trade and changes in world prices. Direct and indirect effects cause a tiny improvement in Chinese GDP and a slight decline in US GDP. In the second scenario, the United States gains from changes in world prices in its favor, but they are not large enough to offset the GDP loss.

In the United States, agricultural, manufacturing, and low-trade service sectors decline in output, while nontraded services increase their output. For China, agriculture and low-trade services decline slightly, while all manufacturing and traded service sectors gain. These results follow the pattern of declines in exports for the United States and increases in exports for China. Again, the results are qualitatively similar, but larger, in the second scenario.

As indicated above, the effects of the trade war could end up being worse than found in this scenario analysis. The scenarios assume, for example, that other countries not involved in the US-China trade war divert trade to the United States. In fact, they may hesitate to invest in expanding into the US market because of the Trump administration’s hostile attitude toward imports. Were that hesitation to occur, the result would be supply bottlenecks and higher prices in the United States.

The two scenarios also assume that investor uncertainty resulting from the trade war does not spill over into shocks to asset markets, generating a recession. There is some evidence of growing unease among investors, but not yet enough to shake asset markets.

The two scenarios further assume that the rest of the world continues to operate within WTO (World Trade Organization) rules for trade among themselves, and that the trade war does not spread beyond the United States and China. Any shift to protectionism by other countries, following a US decision to operate outside the WTO rules, would be damaging. The evidence so far is that the rest of the world is ignoring US trade policies and proceeding with free trade agreements within the WTO structure. [4] China, for example, has cut its tariffs on imports from all non-US countries, even as it retaliates against US tariffs.[5]

The model used in this scenario analysis captures the costs incurred by producers when shifting exports to, and imports from, different markets. These adjustment costs will erode over time as investment opens new markets. The model does not consider the potential costs of shifting markets back if the tariff war is ended. Such costs might be considerable and, if the trade war continues for some time, the process is probably irreversible—once lost, the markets will not be regained.

Here are the results from the two scenarios that were modelled.

Scenario 1 (Current Situation): The United States imposes a 25 percent tariff on $250 billion in Chinese imports, and the Chinese retaliate by raising tariffs on about $110 billion of imports from the United States, with rates differing by commodity between 5 and 25 percent.[6] China exempts most imported intermediate inputs from retaliation—its policy is strategic in that Beijing seeks to minimize the impact of the trade war on Chinese producers. This is the situation as of June 2019.[7]

Scenario 2 (Adds threatened US tariffs): The United States increases the scope of the 25 percent tariff to include what it says is “essentially” all imports from China, which the administration says is approximately $300 billion worth of imported products. China does not respond with additional retaliation.[8] This is the situation if the additional announced US tariffs are implemented.

The empirical results from these scenarios are provided in figures 1-3. Figures 1 and 2 provide information for selected countries and regions and figure 3 for sectoral aggregates in the United States and China. The computable general equilibrium (CGE) model includes 16 countries/regions and 42 sectors. The two scenarios have the same qualitative results, with the second scenario showing larger shocks.

Figure 1 presents results from the two scenarios on trade flows. Scenario 2 results in a large decline in Chinese exports to the United States (14.6 percent). The Chinese successfully divert exports away from the United States, increasing their exports to all other regions, and total Chinese exports rise (1.3 percent in scenario 2). The United States, on the other hand, sees a small decline in total exports (1.3 percent in scenario 2), with the decline spread across all destination regions. 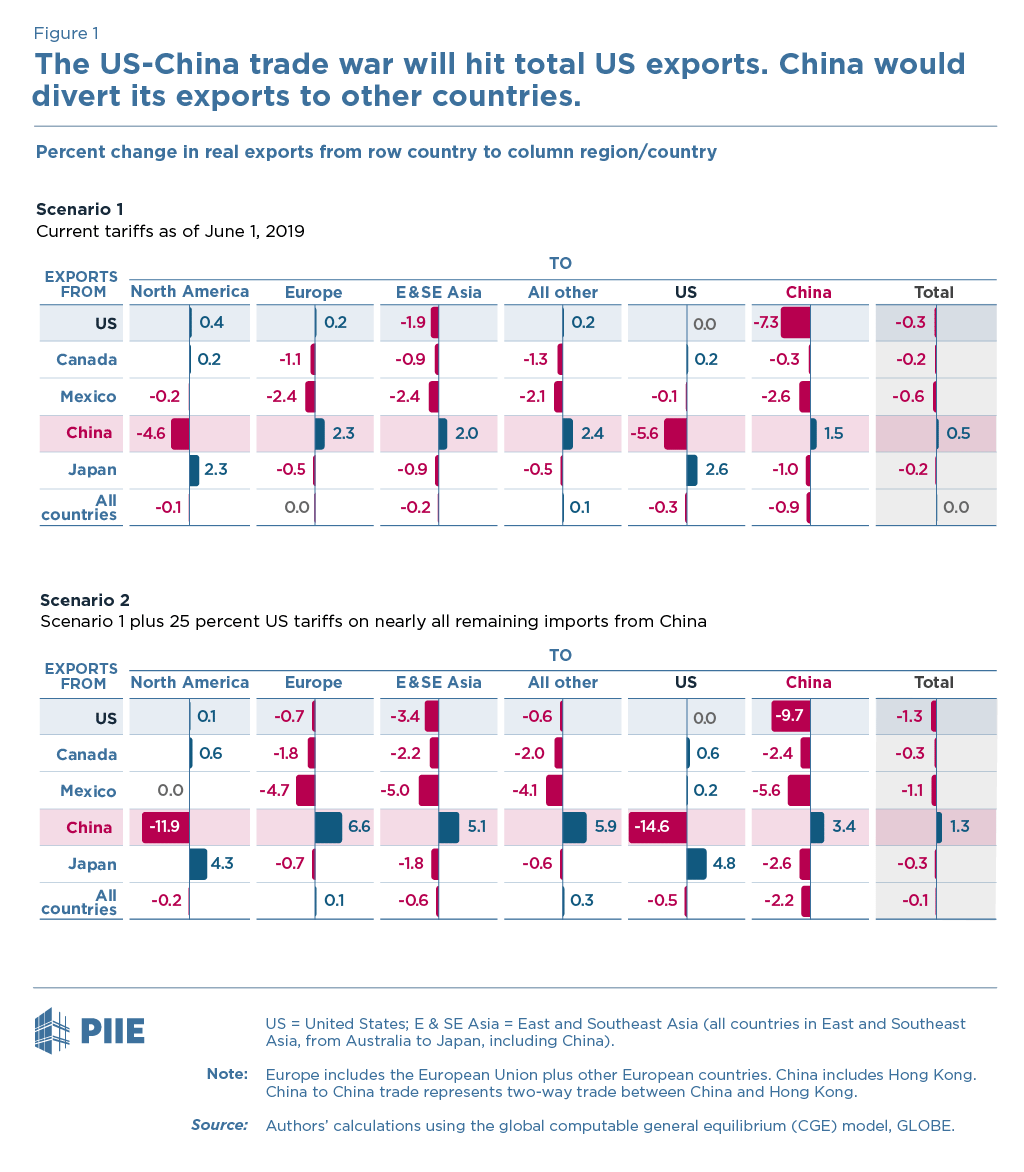 This different result is due to the indirect effects of the tariffs on world prices and the US exchange rate—see figure 2. In the first scenario, the United States suffers a terms-of-trade loss (0.2 percent) and a small depreciation of the its real exchange rate (0.15 percent), while in the second it has a terms-of-trade gain (0.5 percent) and an appreciation of its real exchange rate (by 0.93 percent). On net, the combined effects are negative for US exports in both scenarios. The real exchange rate in China, on the other hand depreciates in both scenarios (2.09 percent and 6.79 percent)—an expected reaction when a major trading partners imposes large tariffs that effectively tax Chinese exports. 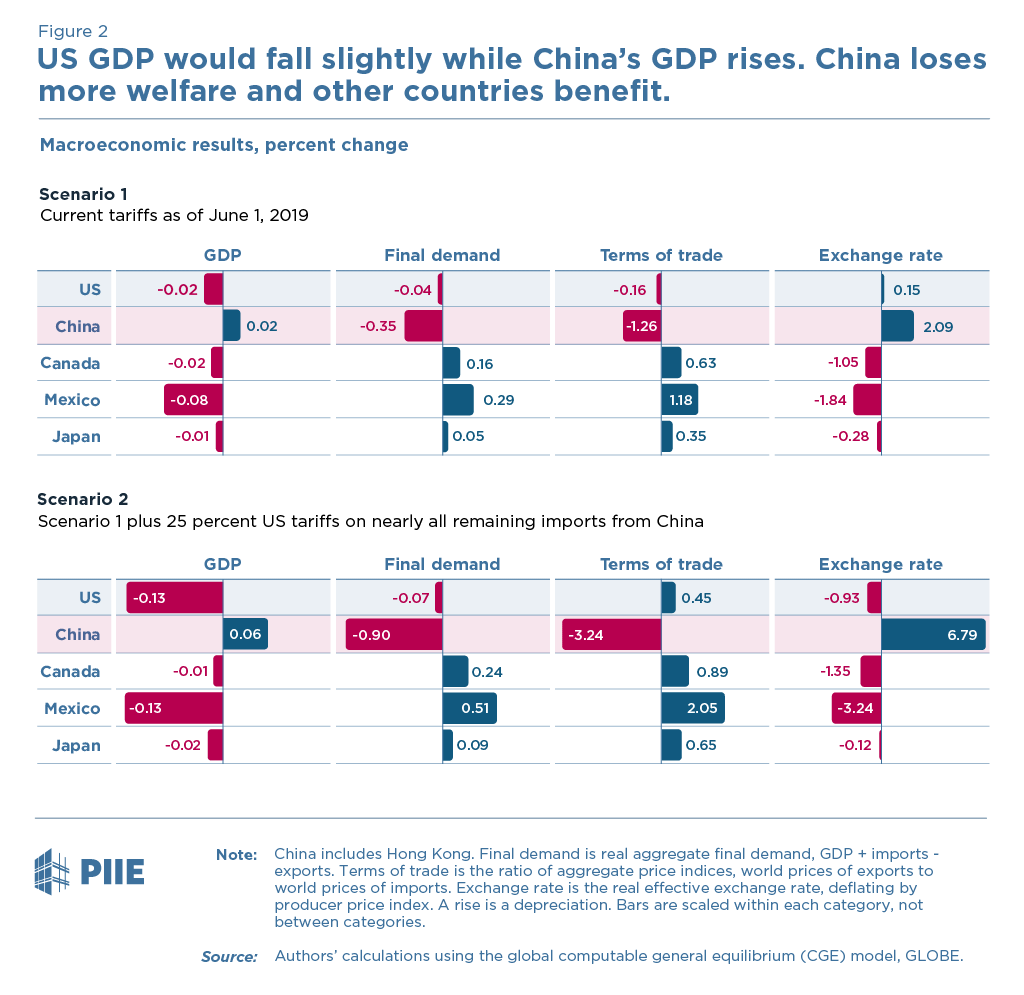 These welfare losses are due largely to changes in world prices that worsen China’s terms of trade (lower export prices relative to import prices) by 1.26 percent in the first scenario and 3.24 percent in the second, which swamp the small gains in Chinese GDP. China pays a high cost to divert trade away from the United States to other markets. If the trade war persists and China completes the process of trade diversion, it would also be costly to return to the old trade patterns when the trade war ends—the changes in the global structure of trade are likely to be irreversible.

Welfare in all other countries—including Mexico, Canada, and others listed in the accompanying tables—improves under both scenarios, largely because of the improvements in their terms of trade. The policy-induced disruptions to international markets change world prices and real exchange rates by nonparticipating countries, allowing them to adjust to the shocks and gain from the market shifts.

Figure 3 shows the impact of the two scenarios on the structure of production in the United States and China. The impacts are similar in both scenarios. For the United States, exports fall in all sectors, with some sectoral variation across the scenarios, and production falls in all but the low-trade services sectors. Agriculture is hit the hardest, while the effects are broadly similar for other sectors. There is a “fallacy of composition” at work: Broad-based tariffs do not protect domestic markets because indirect effects operating through the exchange rate, changes in world prices, and intermediate-input linkages lead to a shift away from traded sectors toward nontraded sectors. In the United States, the shift is away from manufacturing toward nontraded service sectors. 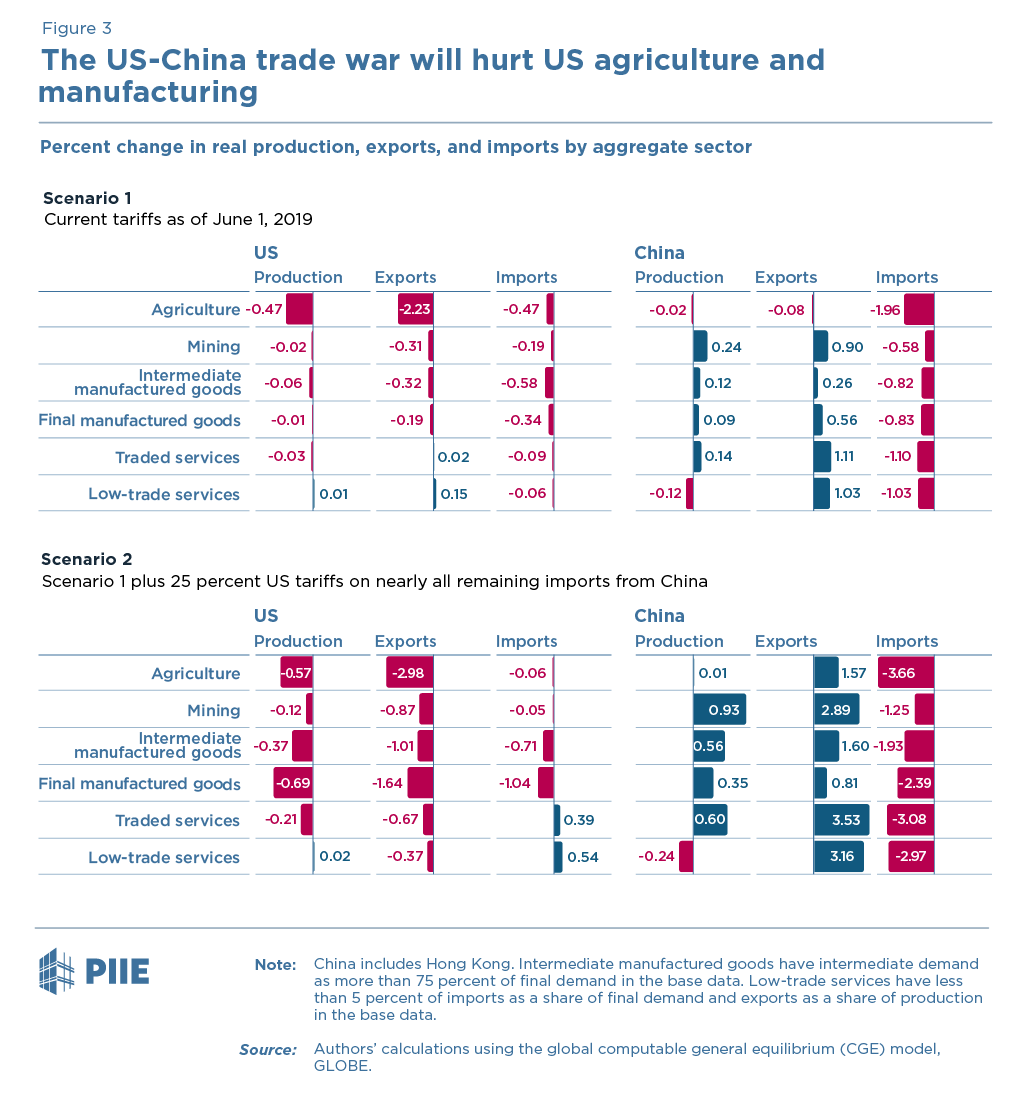 For China, the effects are different. Partly because China chooses to exempt imports of intermediate inputs from their tariff retaliation, they will see a positive impact on GDP and on manufacturing sectors from a trade war. At the sectoral level (figure 3), the result is that the traded sectors in China expand slightly with increased exports, and low-trade services shrink.

Robinson, Sherman, and Karen Thierfelder. 2019. Global Adjustment to US Trade Wars and Disengagement from the World Trading system. Paper presented at the 2019 annual meeting of the Global Trade and Analysis Project (GTAP), Warsaw, Poland, June.

2. The aggregate supply of goods and services available to a country equals its aggregate production (or GDP) plus imports minus exports (which go to foreigners).

3. China has not yet announced any further retaliation.

4. We may be moving to a world where the United States withdraws significantly from world trade. Robinson and Thierfelder (2019) consider various scenarios of such US withdrawal using the same global CGE model.

5. See “Trump Has Gotten China to Lower Its Tariffs. Just Toward Everyone Else” (Bown, Jung, and Zhang 2019) for an analysis of Chinese tariff cuts to non-US countries. The cuts are small in absolute terms, but do signal Chinese commitment to further liberalization.

6. Two earlier studies that considered only the impact of the earlier 10 percent tariffs imposed by the United States are surveyed in The NBER Digest, National Bureau of Economic Research, May 2019.

7. The data on US and Chinese tariffs are available at PIIE at the HS 10-digit level for the US and 8-digit for China and are aggregated to the 42 sectors used in the model. See Trump's 2019 Protection Could Push China Back to Smoot-Hawley Tariff Levels (Bown and Zhang 2019).

8. As of June 2019, China has not announced any additional retaliatory tariffs if the United States carries out its threatened expansion of tariff coverage.

The data underlying this analysis are available here. [zip]