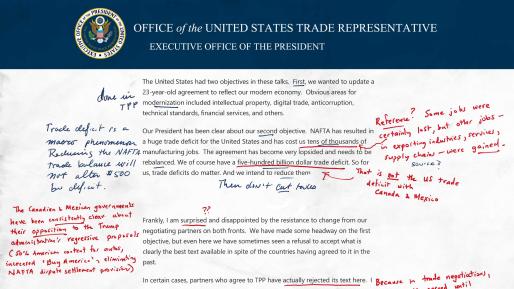 US Trade Representative Robert Lighthizer declared in his closing remarks at the NAFTA renegotiations in October 2017: "I am surprised and disappointed by the resistance to change from our negotiating partners on both fronts." PIIE trade experts Chad P. Bown and Caroline Freund explain, in their own handwritten notes on his statement, why he at least should not have been surprised. Click on the notes to zoom in, then hit your browser's back button to return.

The Amount of Work Is Extraordinary

NAFTA renegotiations started in August 2017. Trade officials from all three countries—the United States, Canada, and Mexico—set a target for concluding the talks by early 2018 to avoid coinciding with Mexico's presidential election and the US mid-term elections. The talks hit an impasse in mid-October and were suspended until mid-November, with follow-up sessions planned next year. Given the sweeping demands by the Trump administration—and its avowed intention to make no concessions—the 4-6 month timeline looks increasingly unrealistic. Freund noted in a previous blog post that it takes 1½ years on average to negotiate a free trade agreement from scratch with the United States.

The US administration has borrowed language from the Trans-Pacific Partnership (TPP) trade deal that President Trump scrapped. The TPP is a useful template for modernizing NAFTA.

One of the main stated goals of Trump's trade team is to reduce the US trade deficit, which stood at $500 billion in 2016 among all its trading partners, not just with Canada and Mexico. However, the reason the United States has an overall trade deficit is because American citizens spend more than they earn and finance the difference with foreign credit. Freund explains that this is a "macro phenomenon," meaning that unless Americans increase income or reduce spending, that deficit will not go away.

Freund writes above, "Then don't cut taxes," because one of the most effective ways to reduce the trade deficit is by shrinking the fiscal deficit. On their own, tax cuts—without commensurate cuts in spending—would expand the deficit, not reduce it. The latest budget measure passed by the House of Representatives on October 26 reportedly would add as much as $1.5 trillion to the federal deficit over a decade. Joseph Gagnon and Fred Bergsten estimate that a $100 reduction in the fiscal deficit reduces the current account deficit by $54.1

While there has been documented job displacement caused by NAFTA, the US economy grew significantly after the deal. This is because trade agreements have little effect on the net level of national employment but do cause some jobs to be eliminated while others are created. Studies show that US job displacement because of increased imports from Mexico—even ignoring gains from US exports—is much smaller than displacement due to automation. And while the issue of job displacement should not be overlooked, renegotiating NAFTA to reestablish trade barriers is unlikely to help any displaced workers take advantage of new employment opportunities.

Disappointed by Resistance to Change

Bown questions why Lighthizer has this reaction considering that Canada and Mexico have been clearly against certain US demands from the start. The US proposals would hinder access for Canada and Mexico to US markets, disrupt complex regional supply chains for businesses like autos, or remove legal protections for workers and businesses to invest for sales outside of their home country.

Both countries have remarked on the extraordinary nature of the US proposals. After the latest round of talks, Canadian Foreign Affairs Minister Chrystia Freeland called some US demands "unconventional" and said they would "turn back the clock on 23 years of predictability, openness, and collaboration under NAFTA. In some cases, these proposals run counter to WTO [World Trade Organization] rules." Mexican Economy Secretary Ildefonso Guajardo pointed out to CNN in April that "There is no one trade agreement in the world that has country-specific content. It doesn't exist."

Agree to TPP, But Not Text Here

Before agreeing to a deal, trade negotiators must consider the whole package of what is being offered and what concessions must be made. Canada and Mexico are not receiving the same benefits here that countries in TPP were going to get when agreeing to that document.

Not Willing to Make Any Changes

Contrary to Lighthizer's statement, US firms are getting a better deal for tariff reductions in Mexico than Mexican firms in the United States. Without NAFTA, the average tariff on Mexican exports to the United States would be 3.7 percent. For US exports to Mexico, it would be 7.4 percent. And about a quarter of US exports would be charged tariff rates above 5 percent, while only 15 percent of Mexican exports would be subject to those higher rates.

By stressing the need for "rebalancing" trade, the administration is taking the approach of managing trade instead of boosting freer trade, something both Secretary of Commerce Wilbur Ross and Lighthizer have supported before. Currently, the trade team is asking for auto imports from Canada and Mexico to have 50 percent US content to receive duty-free treatment under NAFTA. In June, Ross announced an agreement to restrict exports of refined sugar by Mexico. This is similar to the 1980s, when as a government official Lighthizer helped negotiate voluntary export agreements with Japan that limited Japan's exports.

The United States benefits from NAFTA because US firms, especially in autos, can produce products more efficiently and be more competitive worldwide. Research by Lindsay Oldenski and Theodore H. Moran found that for every 100 jobs US manufacturing multinational corporations created in Mexican plants, nearly 250 jobs were added in their US operations. US consumers also enjoy lower prices for goods and services and a wider variety to choose from.

NAFTA Is an Investment Agreement

This could be referring to one US proposal to change NAFTA's Chapter 11 investor-state dispute settlement system or ISDS so that countries would have to "opt-in" to participate. ISDS allows companies to sue another government for damages if they believe their foreign investments are being hurt by that government's actions. Lighthizer suggests here that the US government should no longer be responsible for guaranteeing legal protections for US companies that want to invest in NAFTA countries.

Notes have been edited to fit the screen. Here is the fully annotated document from Chad P. Bown and Caroline Freund. Follow @ChadBown and @CarolineFreund on Twitter.