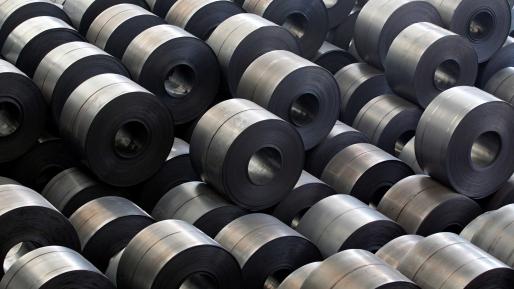 President Trump’s announced intention to impose import tariffs of 25 percent on steel and 10 percent on aluminum touched off a wave of retaliation threats from trading partners. Countries are reportedly already lining up their product lists of US exports over which to impose tariffs of their own. But what are we to make of these threats?

President Trump had kept under wraps the steel and aluminum products being investigated under Section 232 of the 1962 trade law that he is relying on to curb imports. Only after the investigation’s reports were finally made public on February 16 did it become clear that the tariffs—that his administration claims are necessary to protect national security—will cover $46 billion dollars of imports. However, only 6 percent of those imports derive from the country the administration has labeled as the main culprit in flooding the world with steel and aluminum: China.[1]

Rules established by World Trade Organization (WTO) dispute settlement permit a country to retaliate against an action such as the one Trump plans to take if there is a legal finding that the national security rationale is baseless. The compensation—or retaliation—limit has historically been set at the value of an exporting country’s lost trade.

On the other hand, it could take years for retaliation under the process of formal WTO dispute settlement to unfold. As a result, countries may take other steps to circumvent that process, while at the same time claiming that they are relying on basic WTO rules to guide their retaliation response. Using information reported from the Trump administration’s own models, I estimate that Trump’s steel and aluminum tariffs would impose trade losses on partners equal to $14.2 billion per year, an amount establishing the collective permissible retaliation. The countries hit the hardest by Trump’s tariffs are Canada ($3.2 billion), the European Union ($2.6 billion), South Korea ($1.1 billion) and Mexico ($1.0 billion).

Importantly, China would only suffer $689 million in estimated trade losses and thus only be authorized that much in retaliation. The United States currently imports relatively less steel and aluminum from China because previously imposed antidumping and countervailing duties have already severely limited US imports from China of those products (Bown 2017a).

Here is how the WTO would approach the issue. Given the completed investigations under Section 232 of the Trade Expansion Act of 1962, assume that Trump proceeds with tariffs of 25 percent on steel and 10 percent on aluminum. WTO member countries would then challenge his claim that the tariffs are justifiable under the GATT Article XXI “national security” exception. Further assume a WTO Panel and the Appellate Body reject Trump’s defense and find the tariffs inconsistent with US obligations.[2] In that event, suppose the Trump administration nevertheless refuses to amend the tariffs. Complaining countries can then request compensation and the WTO can establish authorized retaliation.[3] Cases like these are rare: The WTO has established the retaliation limit in fewer than 15 disputes since 1995, and in even fewer instances have countries implemented the retaliation.

WTO retaliation is not punitive. Under the principle of reciprocity, the WTO would limit the amount “equivalent to the level of nullification and impairment” that resulted from Trump’s policies. In practice, establishing the limit requires that WTO arbitrators follow a two-step process: (1) decide on a mathematical formula, and (2) decide on key parameter values so as to apply that formula to the context at hand.

In disputes involving WTO-inconsistent import restrictions—e.g., tariffs, quotas, and nontariff measures that limit imports—arbitrators have settled on use of the “trade effects” formula. Historically, the formula has been defined as the difference between imports under the WTO-inconsistent policy and a “counterfactual” level of imports that would have arisen but for the policy. That is the formula applied here.

The second step involves deciding on the monetary values to be assessed. First, for the counterfactual values for trade flows in the absence of Trump’s tariffs, I use the 2017 levels of US imports of the investigated products and subject to the tariffs. Overall, these were $29 billion for steel and $17 billion for aluminum.[4] Figure 1 illustrates the foreign source of 2017 US imports by product and by partner. Top foreign sources for both products combined include Canada ($12 billion), the European Union ($7.3 billion), Russia ($3 billion), South Korea ($2.9 billion), and Mexico ($2.8 billion).

Notably, China exported only $976 million of steel and $1.8 billion of aluminum products to the United States, or just 6 percent of the $46 billion of US steel and aluminum imports over which Trump is imposing tariffs. 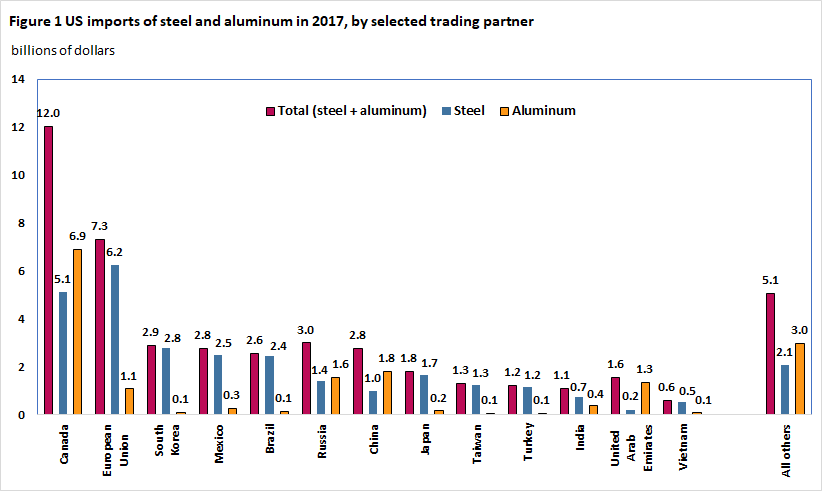 Note: Numbers may not sum due to rounding.
Sources: Author’s calculations based on matching the Harmonized Tariff Schedule product codes in the two Section 232 reports (Commerce 2018a, b) to 2017 import values from the United States International Trade Commission Dataweb (aluminum) and Commerce Department’s Import Monitor (steel).

Who would be authorized to retaliate and by how much?

Figure 2 illustrates the total amount of each country’s retaliation, as well as whether the lost trade derives from lost steel or aluminum exports. Because Trump’s proposed tariffs would be applied to imports from all partners equally—trade losses will be largest for countries that are the largest sources of US imports of steel and aluminum.

Canada would be granted the largest retaliation at $3.2 billion, for $2 billion of lost steel exports and $1.2 billion of lost aluminum exports. The European Union would be granted $2.6 billion ($2.4 billion for steel, $0.2 billion for aluminum), followed by South Korea ($1.1 billion), Mexico ($1 billion), Brazil ($965 million) and Russia ($823 million). Others with sizable losses include Japan, Taiwan, Turkey, India, the United Arab Emirates, and Vietnam. 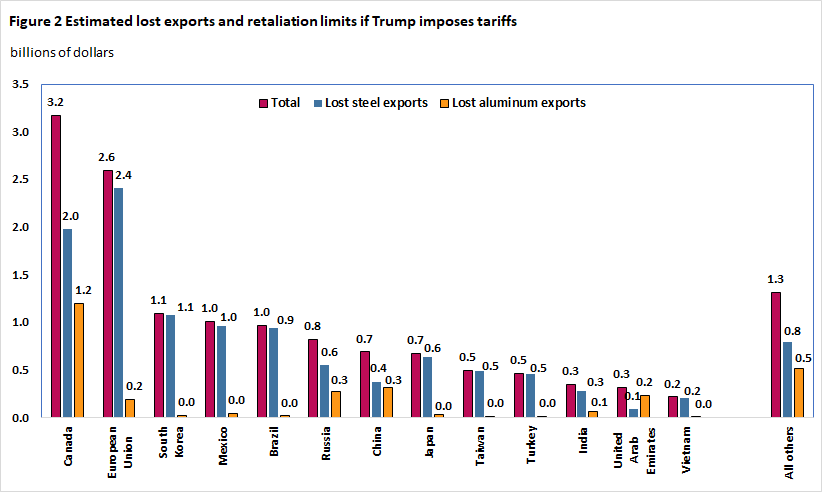 Note: Numbers may not sum due to rounding.
Source: Author’s calculations as explained in the text under the assumption that President Trump imposes an import tariff of 25 percent on steel and 10 percent on aluminum.

China would only be authorized to retaliate by $689 million, or $376 million for lost steel exports and $313 for lost aluminum exports.

The next decision for the retaliating country is to identify which products to put on its list. In the case against Trump, the European Union has reportedly indicated its product list will include blue jeans, bourbon from Kentucky, cranberries and dairy products from Wisconsin, Harley-Davidson motorcycles, US steel products, and agricultural products like rice, maize, and orange juice.[6]

The complaining country typically has discretion to determine which products to target. It may select products based on political motives—e.g., inflicting economic costs on key Congressional leaders in the hope that they will effectively persuade Trump to implement policies that conform with international rules.

Finally, it is also worth noting that authorization of retaliation arising from a WTO dispute can take many years to play out.[7] For that reason, trading partners may also impose more immediate import restrictions—perhaps also guided by these “compensation” (retaliation) limits set out here. They may argue that Trump’s original tariffs should be viewed not as a justified national security exception but as a safeguard, in which case partners can request a more immediate remedy, for example, if there was not an absolute surge in the imports being protected.[8]

Department of Commerce. 2018a. The Effect of Imports of Steel on the National Security: An Investigation Conducted under Section 232 of the Trade Expansion Act of 1962, as Amended. U.S. Department of Commerce, Bureau of Industry and Security, Office of Technology Evaluation, January 11.

Department of Commerce. 2018b. The Effect of Imports of Aluminum on the National Security: An Investigation Conducted under Section 232 of the Trade Expansion Act of 1962, as Amended. U.S. Department of Commerce, Bureau of Industry and Security, Office of Technology Evaluation, January 17.

Yoo, Ji Yeong and Dukgeun Ahn. 2016. Security Exceptions in the WTO System: Bridge or Bottle-Neck for Trade and Security? Journal of International Economic Law 19, no. 2: 417–44.

2. For a discussion of GATT Article XXI see Yoo and Ahn (2016). This blog post will not comment on the legal question of the WTO-consistency of Trump imposing tariffs under Section 232 of the Trade Expansion Act of 1962. It assumes they are WTO-inconsistent for the purpose of establishing one aspect of the potential costs—in the form of authorizable trading partner retaliation against US exports—of such tariffs.

4. Computed as described in the note under the figure 1. These data were not included in the Section 232 reports but had to be constructed independently based on information provided therein.

5. This implicitly assumes that the exporter-received price for steel and aluminum will not fall because of the tariffs, a dubious assumption given the size of the United States as an importer and its likely market power. As discussed in Bown and Brewster (2017, 382) what results is retaliation limits that should be treated as the lower bound. If exporter-received prices fall considerably because of the tariffs, authorized retaliation could be even larger.

7. Horn, Johannesson, and Mavroidis (2011, table 22) show the average length of time that disputes taking place spent at each phase of the WTO’s full dispute resolution process between 1995 and 2010.

8. This may be what is motivating the European Union’s potential response reported in Shawn Donnan and Robin Wigglesworth, “Trump fires back at EU tariff retaliation threats,” Financial Times, March 3, 2018.