India has long been a challenging trading partner for the United States. And in the World Trade Organization (WTO), it has wavered between a begrudging participant and a full-scale obstructionist. Successive US administrations have tried to pry open its markets by offering trade concessions to get it to play by the multilateral rules, with limited success.

President Donald Trump is now reversing course, as he has on most trade issues, seeking instead to punish India with tariffs. Since the beginning of 2018, his administration has increased duties on 14 percent of India’s exports to the United States. India has recently retaliated by slapping new tariffs on about 6 percent of US exports to India, including $600 million of almonds from California.

There are key parallels with the Trump-China trade war. The largest is skepticism that Trump’s escalation intends to fix problems in the trade relationship. Despite the obvious differences with China—that it is smaller both as a trade relationship and a tariff conflict—the worry is that this is just another excuse for the self-proclaimed “Tariff Man” to impose even more duties on yet another country.

First were Trump’s tariffs on Indian steel and aluminum. On March 23, 2018, India was part of the first round of countries hit by Trump’s national security tariffs. Trump imposed tariffs of 25 percent on $761 million of steel and of 10 percent on $382 million of aluminum imported from India. Combined, these tariffs covered roughly 2.3 percent of India’s exports to the United States in 2017. India’s exports of steel products have fallen by 46 percent in the 12 months since the tariffs were imposed.

The small amount of India’s steel trade hit by Trump’s tariffs provides a misleading picture of the damage they are likely to cause. India is the world’s third largest steel producer after China and Japan. And, like China, India’s steel exports to the United States were small because they had already been curtailed prior to the 2018 tariffs through a series of antidumping cases. New duties there had already accumulated to cover almost 70 percent of India’s steel exports to the American market.[1]

Many of the world’s top multinational steel firms have Indian connections, including ArcelorMittal, Tata, JSW, and Steel Authority of India. Steel operations globally with ties to India were affected not only by Trump’s steel tariffs, but also follow-on restrictions imposed by the European Union, as well as potentially by Canada, Egypt, and others, that threaten to further segment the global steel market.

India filed a formal WTO dispute against Trump’s steel and aluminum actions in May 2018. It also announced how it would retaliate, following the lead of Canada, the European Union, China, Mexico, Turkey, and Russia, all of whom implemented tariffs immediately in response to Trump’s national security actions.[2] India’s first official WTO notification indicated it would impose tariff rate increases on a list covering $10.6 billion of US exports. It later revised its notification in June 2018, which covered only $1.4 billion of US exports—but at higher rates.

Yet, despite its announcements, India did not follow through with retaliation in 2018, probably in part because it was simultaneously trying to smooth over other areas of conflict.

The Trump administration’s second trade action against India was its self-initiated review in April 2018 of the country’s eligibility in the US Generalized System of Preferences (GSP). Designated as a developing country, India had been a beneficiary in the US GSP program since 1975. US exporters are now complaining about their lack of access to the Indian market. Most recently US dairy and medical device industries voiced their concerns in government hearings held in June 2018. The US Trade Representative’s 2019 National Trade Estimate Report documents dozens of other such complaints.

Trump ultimately pushed India into retaliating in June 2019 with his decision to raise tariffs by removing it from the GSP program. The administration announced the withdrawal in March 2019, and it went into effect on June 5. GSP withdrawal also means that India’s exemption from Trump’s 2018 tariffs on solar panels and washing machines—imposed under Section 201 of the Trade Act of 1974—no longer applies.

Trump’s GSP-related tariff hike affects $5.8 billion of India’s exports, or more than 12 percent of exports to the United States in 2017.

In response, India finally followed through on June 16, 2019, by implementing its retaliation to Trump’s steel and aluminum tariffs.

Combined, Trump’s national security actions on steel and aluminum as well as the withdrawal of GSP (and new application of duties under Section 201) increased US tariffs on 14 percent of India’s exports to the United States, or roughly $7 billion of trade, in 2017.[3] Figure 1 illustrates India’s exports to the United States across key sectors, including the amount of trade subject to tariff increases. 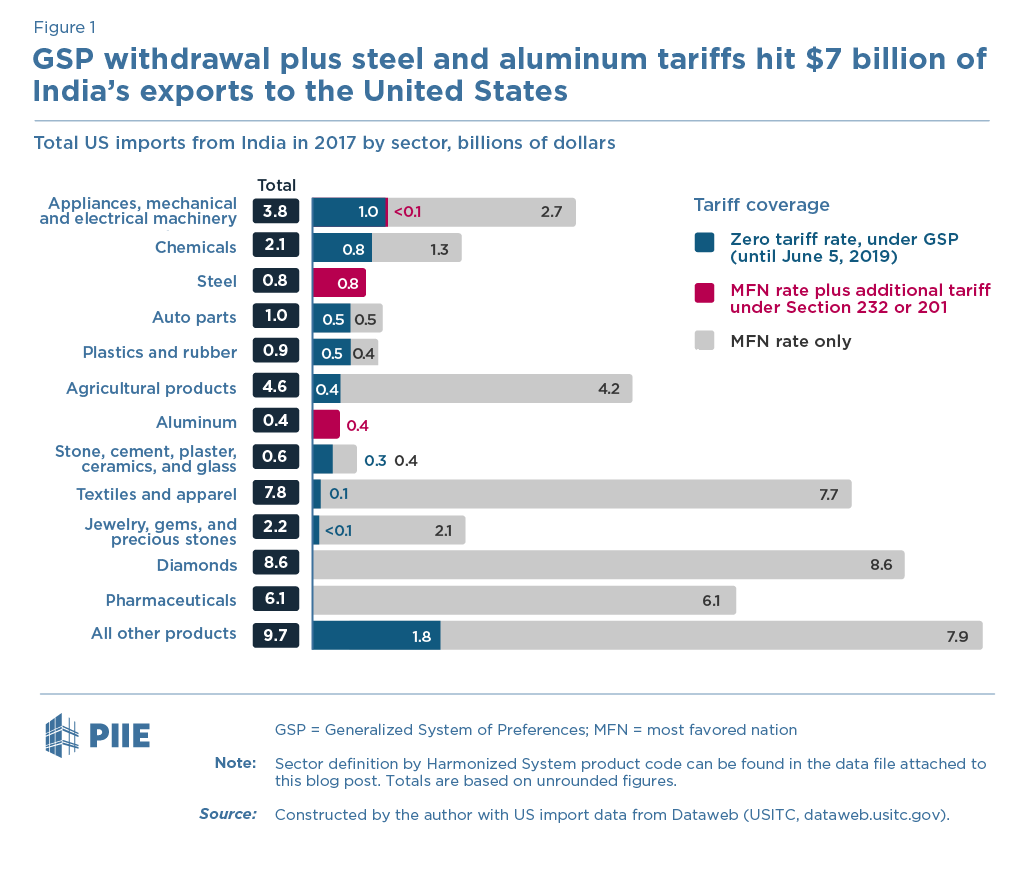 Trump’s tariff increases hit the most amount of trade in appliances, mechanical and electrical machinery, chemicals, steel, and auto parts. Overall, US tariffs on India have increased from 3 percent on average in January 2018 to 3.9 percent today. 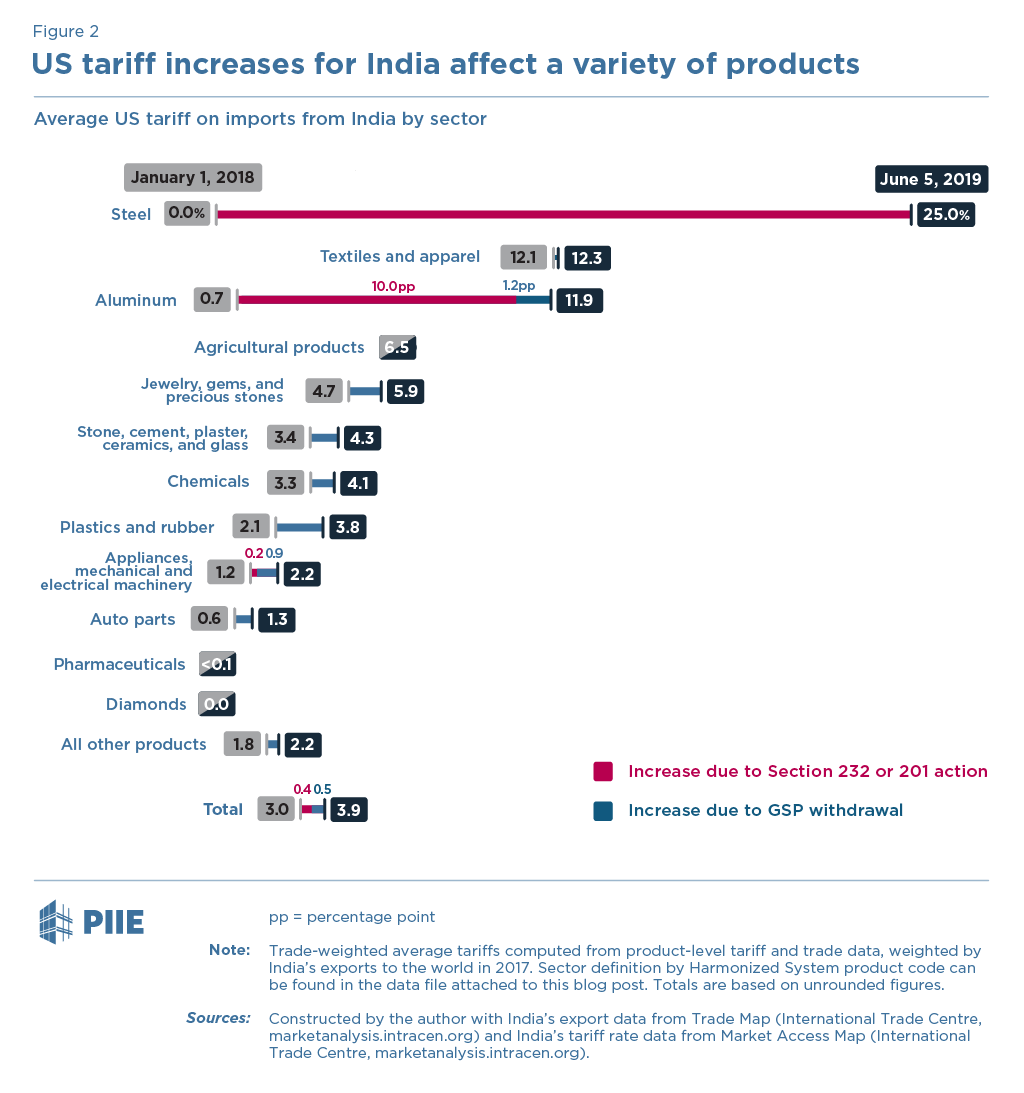 The average tariff increases in other sectors were smaller. For the products covered by GSP, removing India from the program meant the United States increased the tariff facing Indian exporters from zero to the most-favored-nation (MFN) rate paid by members of the WTO that do not have special trade agreements with the United States. For chemicals, for example, the average tariff facing Indian exporters increased from 3.3 to 4.1 percent.

Overall, these tariff increases will make it more difficult for Indian exporters to compete in the US market and will likely raise costs for any American consumers. Nevertheless, the duty hikes are not as large as the massive increases that the Trump administration has imposed on China—from 3.1 to 18.3 percent—during this same period. 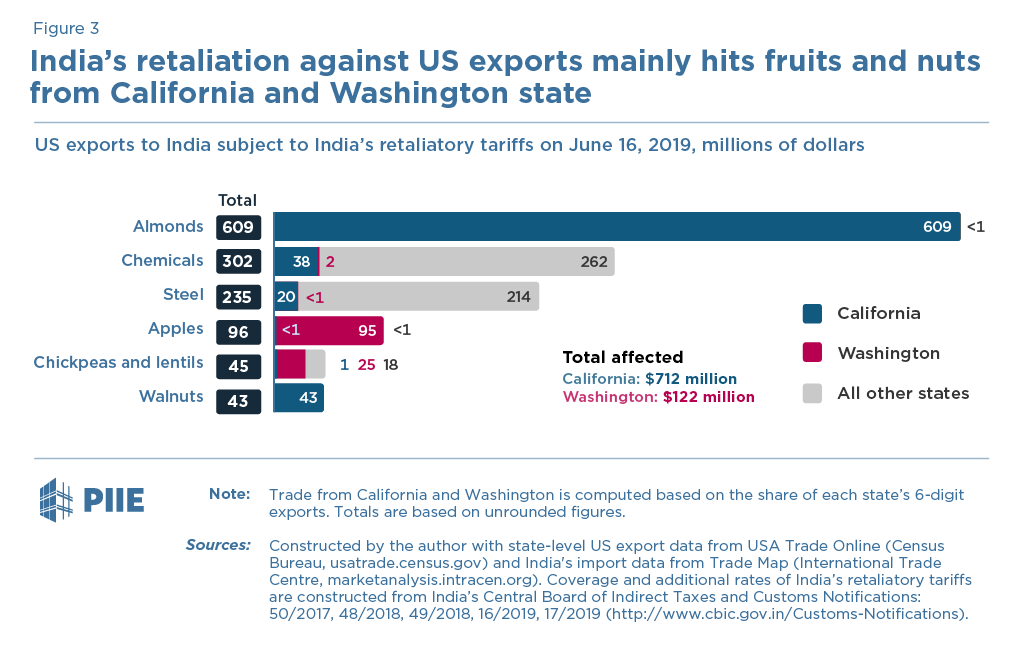 India’s retaliation list included other products like chickpeas, lentils, steel, and chemicals exported from a number of American states.[5] India’s choice of steel likely reflects an effort to impose costs on the same US industry benefiting from Trump’s Section 232 tariffs in the first place.

India in the WTO

India followed the lead of many countries by choosing retaliation as a response to the Trump administration. But the move is legally questionable: In this case, a US challenge to India’s tariff increase through a formal WTO dispute could find that the retaliation breaks at least two rules. First, the tariff increase likely violates MFN treatment, since it only applies to the United States. Second, the increase on almonds, walnuts, and apples pushes India’s tariff to levels exceeding its WTO legally binding rates.[6]

Trump’s tariffs justified as a national security exemption are already being disputed at the WTO in ongoing litigation, including by India.[7] Less clear is if the US tariff increase by withdrawing India from GSP violates WTO rules. GSP is a unilateral and discretionary program that is subject to the whims of the granting country. This is but one of the Faustian bargains developing countries agreed to when the program was developed in the 1970s.

It is also worth noting India’s long history as a reluctant member of the multilateral trading system. Examples of recent conflict areas include its staunch support of special and differential treatment, a system the current US administration has challenged. The United States and other countries have also begun to “counter-notify” India’s farm subsidy programs to the WTO, alleging its required WTO submissions—i.e., its notifications—are incomplete or inaccurate. And along with South Africa, India has moved to end the moratorium on duties imposed on electronic transmissions that cross borders that had been agreed by the WTO membership since 1998.

Trump’s treatment of India under GSP is not unique. The administration recently also pulled Turkey from the program. Trump is reviewing a number of other countries—including Indonesia and Thailand—and they too could be expelled, radically reshaping the US GSP program.[8]

And more Trump tariff increases on India may also be in the offing. Inside U.S. Trade has reported that India could be another target of a Trump administration investigation under Section 301, the law used to impose its unprecedented tariffs on China. In relative terms, the tariff increase resulting from India’s GSP withdrawal is not that large. A move against India under Section 301 could be much bigger.

Even so, the Section 301 law is unlikely to be what, if anything, constrains Trump from imposing even more damaging tariffs on India. The experience with China reveals just how few constraints that statute imposes on a president determined to impose tariffs on a massive amount of trade.

But there are two main forces that limit additional US tariffs on India.

First is the economics. India only exports $50 billion per year to the United States, whereas China exports 10 times that amount. India is also much poorer, with less than 25 percent of China’s income per person.

Second, as The Economist recently noted, is the geopolitics. India benefits from certain security and diplomatic partnerships and is one of the few, relatively friendly, democracies in the region.

What lies beneath the US-India trade conflict is nothing new. And like each of the other trade problems that pre-date Trump, the United States is no further along in cleaning them up—except that there are now a lot more tariffs.

1. Derived from the data used in “Trump’s Steel and Aluminum Tariffs Are Counterproductive. Here Are 5 More Things You Need to Know” (Bown 2018).

2. Japan also announced it would retaliate but, like India, delayed implementation. It has still not yet imposed higher tariffs.

6. Such a violation of Article II is interesting, given that India’s tariff binding rate for many products is extraordinarily high, averaging 50.8 percent (WTO 2019).

7. While speculative, the recent WTO ruling in the Russia-Transit dispute suggests the United States may have a challenging time meeting the criterion for an acceptable national security defense under Article XXI. See “Trade Talks Episode 81: National Security and Trade – The Fear of Imitation” (Bown and Keynes 2019).

8. The top five US GSP beneficiary countries in 2018 by export values were India, Thailand, Brazil, Indonesia, and Turkey.