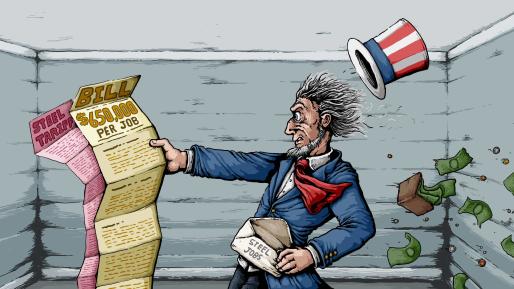 At the center of President Donald Trump’s industrial policy has been his pledge to bring back jobs in the steel industry by slapping tariffs on imported steel. On March 23, 2018, he imposed a 25 percent duty on nearly all steel imports. Subsequently, quotas with similar protectionist effect were soon agreed with select trading partners (Argentina, Brazil, and South Korea), and may be reached with Mexico and Canada.[1] The underlying purpose of tariffs and quotas was to make imported steel far more expensive, permitting domestic US steel producers to raise their own prices to higher levels.

The administration acted under a dubious premise—“national security” was invoked under Section 232 of the Trade Expansion Act of 1962, on the questionable contention that domestic steelmakers must be shielded today in case a future war deprives the Pentagon of essential steel. But the argument that new restrictions could be imposed cost-free is no less dubious. Calculations show that Trump’s tariffs raise the price of steel products by nearly 9 percent. Higher steel prices will raise the pre-tax earnings of steel firms by $2.4 billion in 2018. But they will also push up costs for steel users by $5.6 billion. Yes, these actions create 8,700 jobs in the US steel industry. Yet for each new job, steel firms will earn $270,000 of additional pre-tax profits. And steel users will pay an extra $650,000 for each job created. Wow! 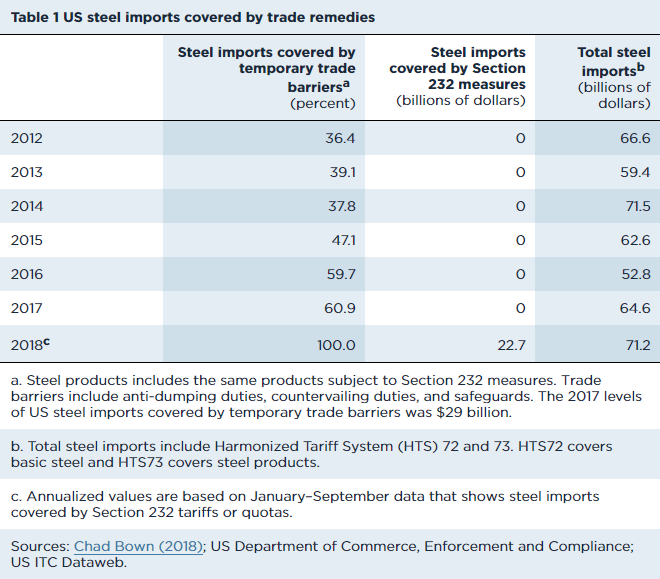 At the time Trump’s tariffs were imposed, multiple anti-dumping and countervailing duty actions (summarized in table 1) had already restricted imports of individual steel products from identified countries (mainly Brazil, China, Japan, Korea, Turkey, and the European Union). The penalty duties probably had some effect in raising average US producer prices above US import prices between 2014 and 2017, as shown in figure 1. For a while, the two price indices converged, but Trump’s tariffs and quotas decisively lifted US producer prices above US import prices in the middle of 2018.[2] 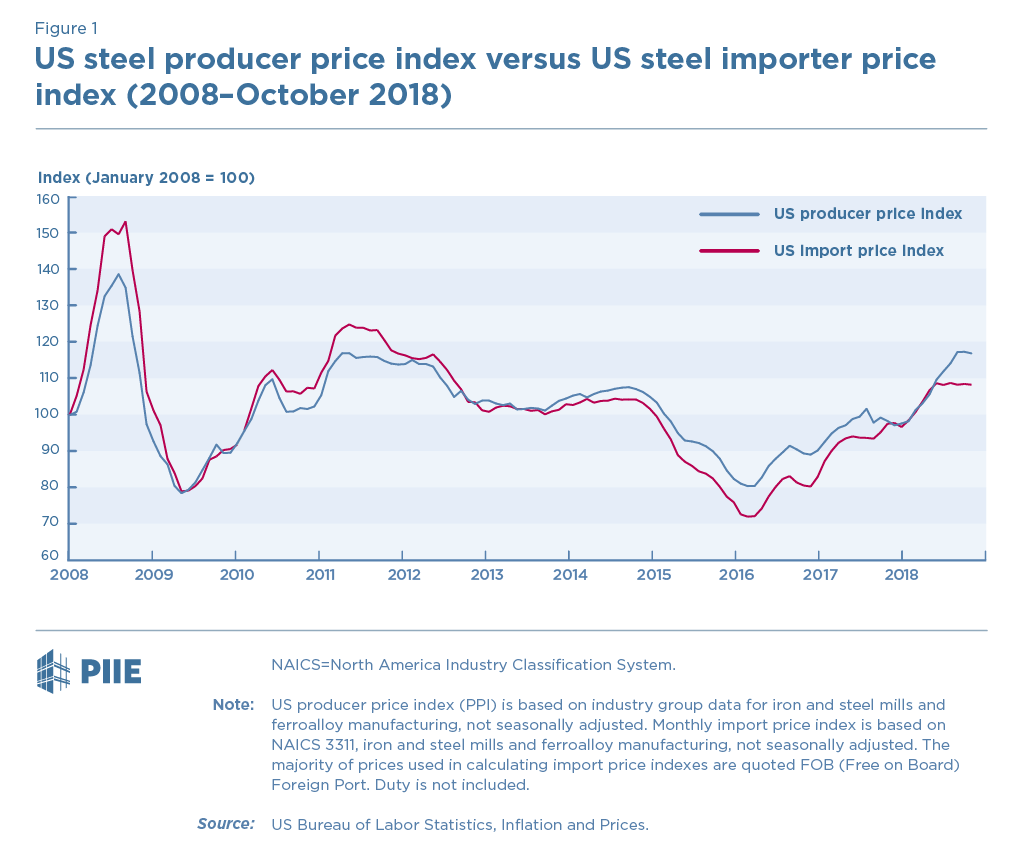 Figure 2 shows quarterly pre-tax earnings of publicly traded US steel firms. Obviously, earnings have improved since 2016. This is largely due to increased production (tonnage), inspired by higher US producer prices, as shown by the regression analysis in table 2. 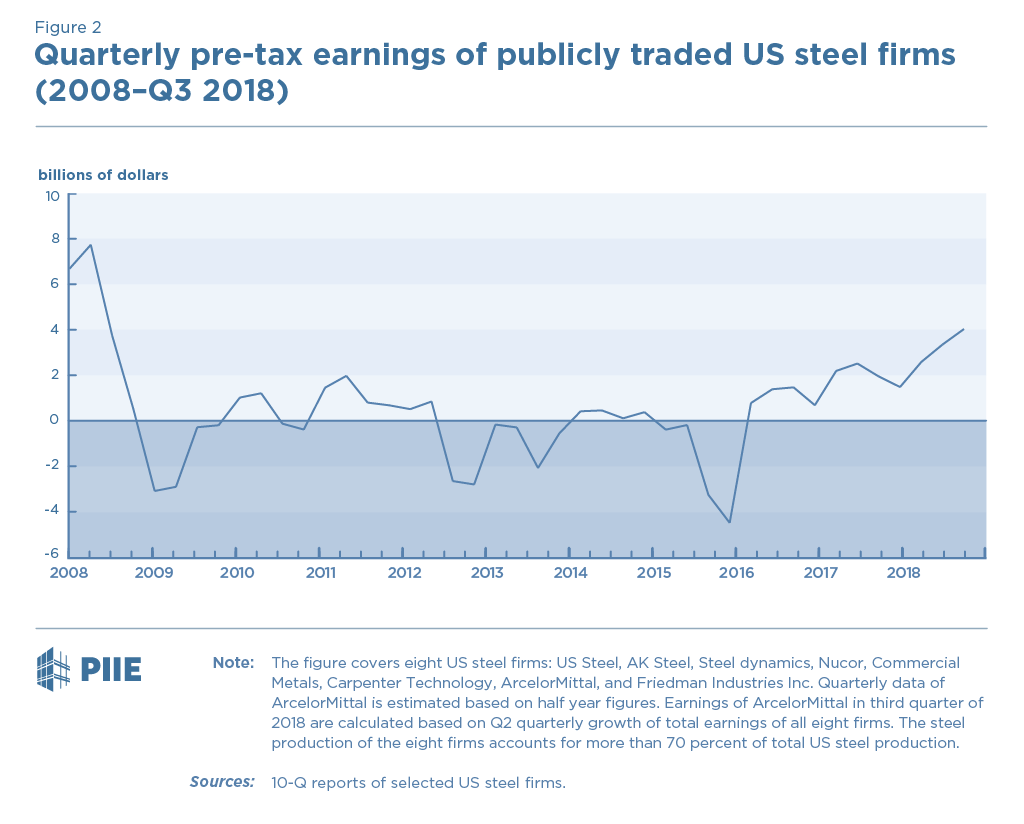 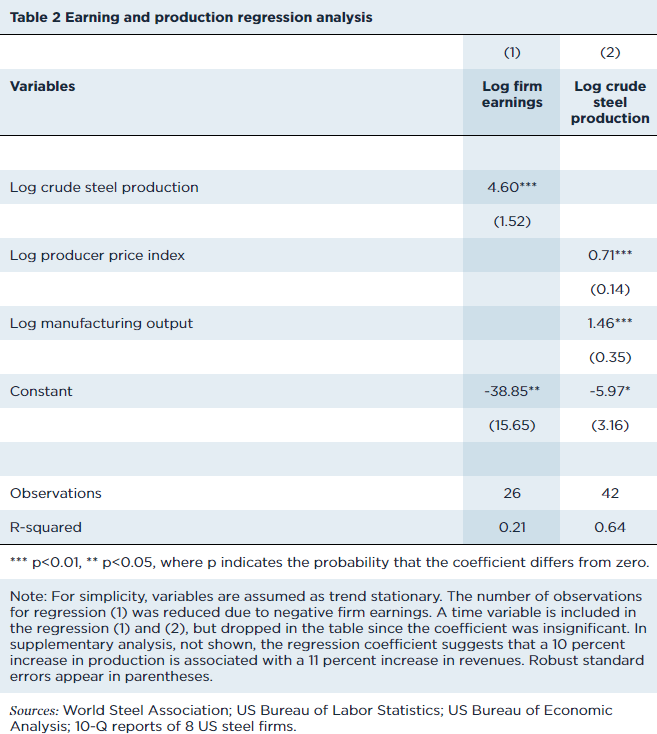 Based on the first regression analysis in table 2, quarterly fluctuations in US steel production have a large and statistically significant impact on steel firm earnings. The regression coefficient suggests that a 10 percent increase in production delivers a 46 percent increase in earnings. Steel production is characterized by high fixed capital costs. Those costs barely change when tonnage rises or falls, which explains why production volume exerts a hyper impact on earnings.

The second regression analysis in table 2 relates production tonnage both to US producer prices and US manufacturing activity as a proxy for steel demand. Between January and October 2018, US producer prices rose 19 percent. The regression coefficient suggests that a 10 percent rise in steel prices delivers a 7.1 percent rise in production, implying that US steel production will ultimately increase by 13.5 percent thanks to the 19 percent price lift since January 2018.

Reverting to the first regression equation, a 13.5 percent rise in production should deliver, on an annualized basis, a 46 percent increase in pre-tax earnings. Annualized steel earnings in 2017 were $8.2 billion, so the price-induced increment should be about $5.1 billion (62 percent of $8.2 billion).[3]

Higher US prices reflect both the stronger global economy, which has boosted world steel prices, and the additional impact of US tariffs. The data underlying figure 1 shows that 53 percent of higher US steel prices since January 2018 can be attributed to the general rise in world prices, and the remaining 47 percent to Trump’s tariffs and quotas.[4] Accordingly, some 47 percent of the gain in steel firm earnings from their 2017 level to their forecast 2018 level can be attributed to Trump’s tariffs and quotas. The arithmetic suggests that, on an annual basis, US steel firms will be $2.4 billion richer, pre-tax, thanks to trade protection (47 percent of $5.1 billion).

How much more will steel-using firms pay owing to Trump’s gift to steel firms? The preceding arithmetic suggests that US steel prices will be 8.9 percent higher in 2018 than in 2017 thanks to tariffs and quotas (47 percent of 19 percent). In 2017, the value of steel sales was about $63 billion ($775 per ton times 81.6 million tons).[5] The 8.9 percent protectionist increase in US steel prices will deliver a hike in steel user costs of about $5.6 billion (8.9 percent of $63 billion).

Employment in the steel industry, portrayed in figure 3, is closely related to tonnage production, but with a small decline year-by-year owing to better productivity, as shown by the time trend in the regression analysis in table 3.[6] Put simply, in 2008 steel output per worker was 540 tons; by 2017 output per worker had increased to 598 tons.[7] 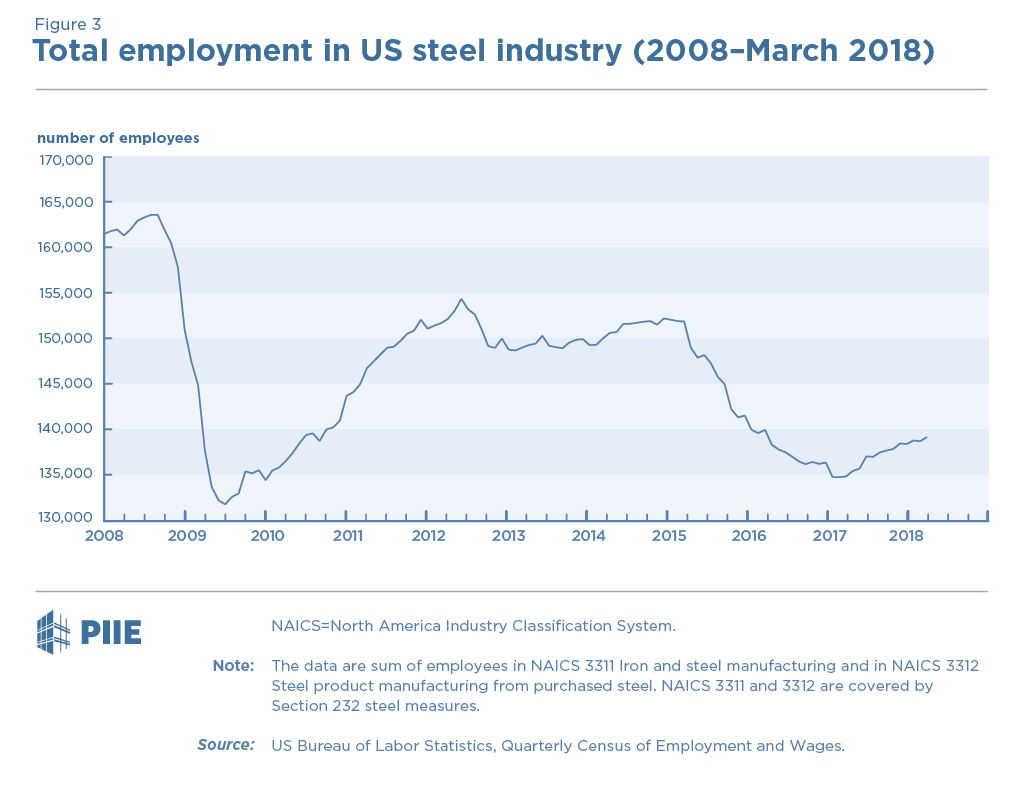 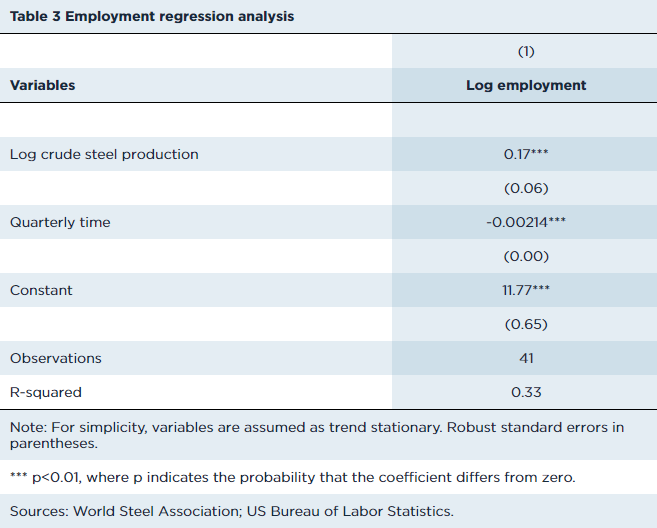 Based on the regression analysis in table 2, and the impact of protection on steel prices, US steel production should ultimately increase by about 6.4 percent because of Trump’s tariffs and quotas (47 percent of 13.5 percent). This amounts to about 5.2 million tons on top of 2017 production (6.4 percent of 81.6 million tons). At the current level of steel output per worker (some 600 tons), about 8,700 additional steel workers will be employed.[8]

It’s interesting to compare this estimate with a calculation by Laura Baughman and Joseph Francoise of Trade Partnership Worldwide, LLC at the inception of Trump’s steel and aluminum tariffs. They calculated employment in the US steel and aluminum industries (mainly steel) might increase by 26,000 jobs over three years, while employment would decline by 433,000 jobs in the rest of the economy, owing to the depressing impact of higher steel and aluminum prices on downstream industries. Our estimate of steel industry jobs created is far smaller. We do not attempt to calculate the impact on downstream industries, but as Baughman and Francoise suggest, job losses probably exceed jobs created by a large magnitude.

Our arithmetic is stark. Steel tariffs will boost firm pre-tax earnings by $2.4 billion and create about 8,700 jobs—over $270,000 of pre-tax profits for each job. Steel users will pay an additional $5.6 billion for more expensive domestic steel, thanks to protection. In other words, steel users will pay about $650,000 for each job created in the steel industry.

Whatever President Trump and his lieutenants may have said about guarding national security or creating steel jobs, the tariffs were never about military strength or American workers. Their purpose was to enrich steel firms. They succeeded—but at an exorbitant price.

1. With quotas, the benefit from higher US steel prices accrues to firms in the exporting country, rather than tariff revenues collected for the US Treasury. Australia, a longstanding ally and small steel producer, was exempted from both tariffs and quotas.

3. This calculation yields expected annualized pre-tax earnings of $13.3 billion, very close to the estimate of $13.4 billion based on January to September 2018 earnings.

5. The steel price in 2017 is calculated based on average price of three types of steel products from August to December 2017. See http://steelbenchmarker.com/files/history.pdf

8. Additional employment is calculated as the production increase on account of protection (5.2 million tons) divided by output per worker (598 tons per worker).

The U.S. Heads Further Down the Path to Managed Trade