Should Developing Countries Get Preferential Treatment on Trade?

President Donald Trump thinks that China, India, and other emerging economic powers are taking unfair advantage of the global trading system by calling themselves “developing” countries. He reiterated his complaint in a recent speech in Pennsylvania, where he again threatened to leave the World Trade Organization (WTO) if he does not get his way. Trump’s thinking, according to an internal memo, is that by designating themselves as developing countries, these trading partners get preferential market access, the use of certain export subsidies, and other benefits they do not deserve. His administration will now draw up a list of countries to exclude from this category; if the countries do not agree, it will no longer treat them as developing countries in the WTO.

In reality, the United States is setting another toothless dog on China that nevertheless further erodes the rules-based nature of the multilateral order. The United States will not convince larger developing countries to abide by the same rules at the same time that it is pulling the global trading system apart.

For all of Trump’s criticisms, you would think that being a developing country in the WTO is a real privilege. It is not. In the WTO parlance, developing countries may have access to flexibilities known as “special and differential treatment” (SDT). But there is no single definition of what SDT entails. Its content is determined in the context of each agreement, as a result of a negotiating process.

Typical SDT may include preferential market access or technical assistance, or it may allow exceptions to specific rules and liberalization commitments. Some of these provisions in the existing WTO agreements continue to be relevant, but many are not. For instance, longer transition periods for developing countries to adjust to new rules have already expired. In any case, these flexibilities cannot unilaterally be changed. They have to be agreed upon in a negotiation. The White House threat to withhold SDT to countries “inappropriately” claiming developing country status is thus mostly hollow.

The flexibilities accruing to “developing” country status are useful mostly for smaller and poorer countries, which may need them to implement complex agreements and to prepare to leverage the opportunities of international trade. But the evidence is mixed on the overall effectiveness of “special and differential” benefits. Lack of reciprocal engagement in negotiations has resulted in continued constraints for export sectors where developing countries typically possess comparative advantage, like agriculture or apparel. And by sometimes exempting themselves from reciprocal commitments, developing countries have missed opportunities to foster domestic reforms to support integration into global markets.

The real issue at stake is the role of multilateral rules in disciplining the policies and actions countries adopt at the national level that may have sizeable economic effects in international markets. When most international trade was conducted among advanced nations, application of the rules among themselves was the greatest concern. But as developing countries’ exports have grown to represent almost half of total world exports as of 2017 (see figure below), with the largest 15 developing economies accounting for some three-quarters of that share, their actions can also impact global markets. There is thus a strong rationale to have all larger economies abide by multilaterally agreed and applied disciplines because their policies affect international markets. 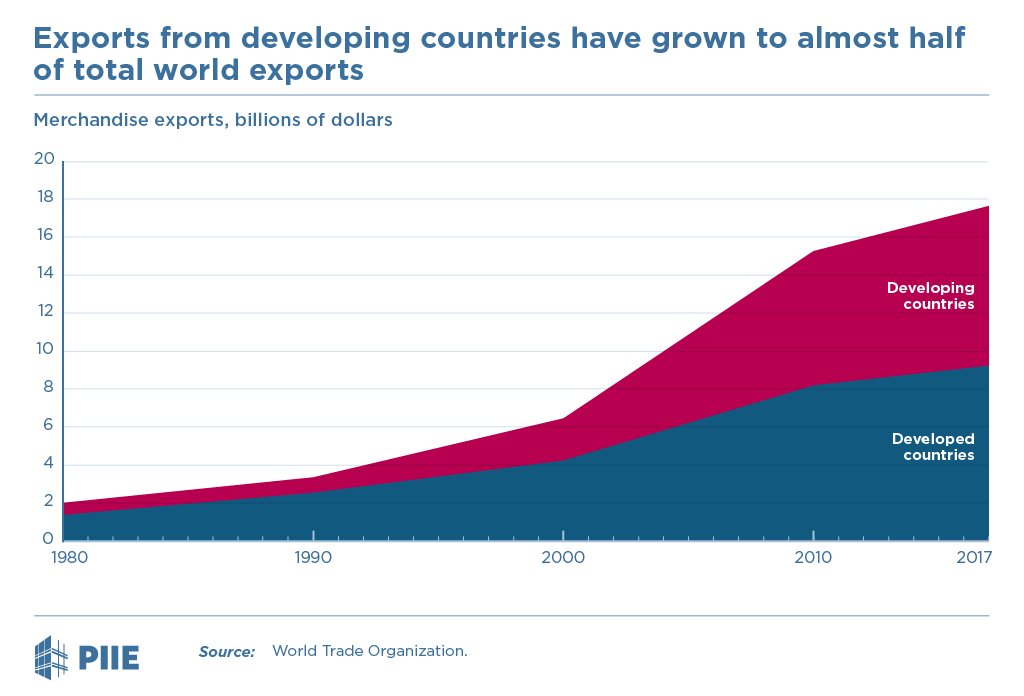 But the Trump administration’s attempts to bring larger developing countries fully into the global trading system while shooting at the system itself will not work. Bilateral arm-twisting has turned out not to be as effective either, as current confrontations with China show. While highly unlikely in the months to come, the only option for both developed and developing countries is to engage, build alliances, and enter into negotiations. Hopefully, at the right time, all players will come to understand that this is in their own self-interest and that of the global economy.

Bridging the Divide between Developed and Developing Countries in WTO Negotiations

All Roads to a Better Trade Deal Lead Through the WTO