Scrapping NAFTA Will Sink the Peso and Expand Trade Deficit

The threat of a trade war with Mexico has receded as talks proceed this fall over renewing the North American Free Trade Agreement (NAFTA). One telling result is that the Mexican peso, which had plummeted in value against the dollar after Trump’s election and again after he took office, has recovered. The peso’s exchange rate value is now stabilized at a level that is actually higher than it was before last November.

Accordingly, the administration should be wary of blowing up the talks with actions rather than words. Peso movements would very likely compensate any loss in Mexican competitiveness due to tariffs.

Right now, however, markets are yawning in response to tough talk on NAFTA. When President Trump recently announced that he would probably pull out of NAFTA, there were only brief and minor jitters in exchange markets.

The US-Mexico trade deficit would very likely expand in the absence of NAFTA.

The formal renegotiation process seems to have had a calming effect. Since the US Trade Representative issued a letter to Congress in May, indicating its intent to renegotiate NAFTA, the peso has gained and stabilized.

In contrast, when Donald Trump won the election, the peso plummeted more than 10 percent (similar to the pound’s decline vis-à-vis the euro immediately after the Brexit vote). In January, amid heightened uncertainty about the future of NAFTA, the peso sank another 5 percent. Rumors that Trump was planning to sign an executive order to begin the process of withdrawing from NAFTA led the peso to dip nearly 5 percent in April. 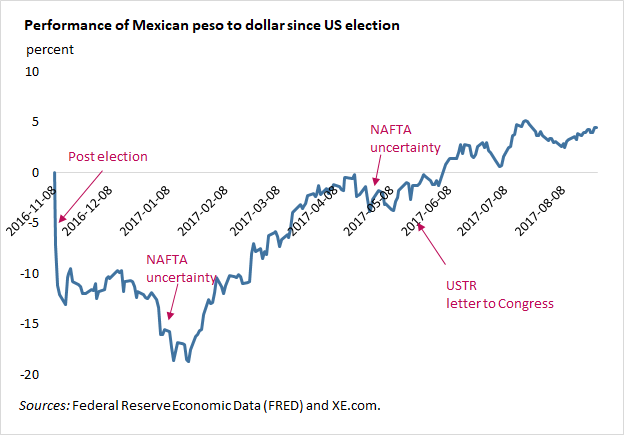 After a full peso recovery, exchange rate speculators won’t be fooled so easily again. It will take more than a tweet.

But renegotiation talks could still get derailed. And what we have learned from these past experiences is that if NAFTA is scrapped the peso will plunge.

The irony is that the very reason the Trump trade team hates NAFTA—the bilateral deficit—would likely get larger as a result. The deficit would worsen because trade responds to both tariffs and exchange rates. Without NAFTA, goods crossing the border would face tariffs and a weaker peso.

For example, a 15 percent peso depreciation seems reasonable judging from the winter experience and Brexit. Coupled with an average US tariff of less than 4 percent, it would make goods imported from Mexico 11 percent cheaper in the United States. In contrast, US goods, facing an average tariff of 7 percent, would become on average 22 percent more expensive in Mexico.

There will also be important distributional consequences. Some producers and consumers in both countries will lose. For example, US agriculture exporters, facing a stronger dollar and high Mexican tariffs, will lose; US consumers of light trucks, which would face high US tariffs in the absence of NAFTA, will also lose.

In sum, because exchange rates adjust, Mexican exporters will be compensated for the loss in competitiveness without NAFTA. In the short run, if history is a good guide to how much the peso will depreciate, the US-Mexico trade deficit would very likely expand in the absence of NAFTA.