Creating jobs, while reducing both the trade deficit and the budget deficit—without altering taxes or government expenditure—is good for US workers. One government agency does all these things.

The Export-Import Bank (EXIM) provides financing and insurance for US businesses that want to export, stepping in when private sector financing is unavailable. Over 70 percent of authorizations support exports to emerging markets, where private financing can be difficult to obtain. EXIM credit and insurance allows US small businesses to send their products to countries like Nigeria and Bangladesh.  It also allows big companies such as Boeing, GE, and John Deere to compete with large foreign rivals for mega contracts around the world. The growth of exporters, small and large, creates the good jobs that Americans want.

The bank also, of course, expands US exports, reducing the trade deficit, and returns the profits from its business to the US Treasury, trimming the budget deficit.

The bank’s authorization lapsed at the end of June last year, and it was not reauthorized until December 2015. Even now, the bank remains constrained because the Board needs a three-member quorum to approve insurance, loans, or guarantees over $10 million; currently the five-member Board has only two serving directors. A well-qualified nominee for the vacant Republican position, J. Mark McWatters, has been identified, but he cannot be confirmed until the Senate Banking Committee approves his nomination. The committee chairman, Richard Shelby, said recently that he is “in no hurry to move.”

While Shelby delays, American businesses are losing contracts and credibility. Boeing, whose contracts are in the billions of dollars, forfeited a potential purchase from Ethiopian Airlines as a result of the limit. GE moved a 106-year-old plant and its 350 jobs to Canada to benefit from access to more reliable financing from that country’s export credit agency. Small businesses with projects in the tens of millions of dollars are also being affected by the lending limit.

In 2015, when EXIM was closed for nearly half the year, half of the exports that it finances were lost, as was half the remittance to Treasury. In the first few months of this year, as a result of the empty board seat, the value of EXIM authorizations is running at about half its historical average; historically about two-thirds of the value of the contracts are in the constrained range. So even with the bank open for business, 2016 could be another year of lost exports and lost revenues if action is not taken soon. Each day’s delay on confirmation costs US businesses about $50 million in exports.

The year before a presidential election can be tough for confirmations when Congress is held by the opposing party, but last year was especially bad. The figure below shows the number of nominations and congressional votes in the same year.  In 2011, just 60 percent of appointees received a vote in the same year. In 2015, barely over half were voted on. So far this year, none of the 30 appointees has received a vote.

In the case of EXIM, the main victim of the Senate’s failure to act is not the president, his party, or even the nominee, but the workers whose livelihoods depend on trade. 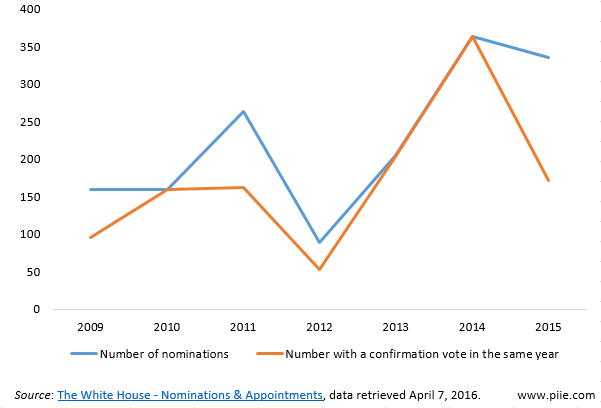 Disclosure: The author is a member of the Ex-Im Bank’s Advisory Committee.