Following an extremely rare discharge petition, the US House of Representatives voted overwhelmingly on October 27 to reauthorize the US Export-Import Bank. This unusual path was necessary because the Ex-Im Bank's charter expired at the end of June, and the leadership of the House refused to bring reauthorization of the bank to a vote—despite support from the majority of Republican members. 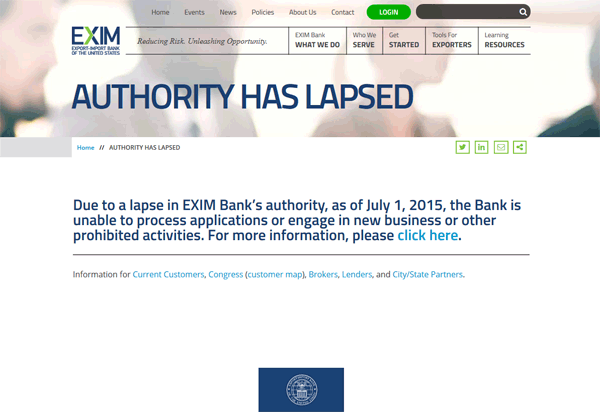 Last year the Ex-Im Bank authorized $20.5 billion in financing of exports, supporting $27.5 billion in exports and 164,000 American jobs. Over one third of that occurred in July-October, a period over which the Ex-Im Bank has been closed this year. The 4-month lapse contributed to General Electric moving a plant to Canada, where export credit is more readily available, and the loss of hundreds of US jobs. Boeing also trimmed a similar number of jobs as a result of lost business. But it is not just the superstar exporters that are affected; numerous small businesses that rely on the Ex-Im Bank for finance have also had to cut back on workers because of trouble accessing export finance. The hiatus could affect as many as 40,000 workers in lost jobs, lower wages, or reduced hours.

The Ex-Im Bank is needed to help US exporters compete with foreign firms that typically market their products with finance packages in hand. (Export powerhouses like China, Japan, Korea, and Germany all have export credit agencies far larger than the Ex-Im Bank.) It is also needed to allow small firms, whose banks may have less experience in trade finance, to access global markets. Ex-Im Bank products provide guarantees to foreign borrowers purchasing US exports and insure products while in transit, making it easier for private banks to support US exporters.

The Ex-Im Bank also protects exports and jobs when credit gets tight. During the financial crisis exports plummeted. Despite the drop in exports, financing by the Ex-Im Bank expanded, highlighting the countercyclical role the credit agency plays. Without the Ex-Im Bank the downturn would have been that much worse, as more exporters would have lacked financing.

The best thing about the bill introduced by Congressman Stephen Fincher (R-TN) (which is similar to the bill that passed the Senate in June) is that it reauthorizes the bank for four years. For US exporters a longer-term reauthorization means that there is less uncertainty about financing. Uncertainty is very bad for business because importers are hesitant to in start a long-term trade relationship with a US business if the financing arm is under threat. It is also good because the bank and the businesses that rely on it will skip the grandstanding around reauthorization next year—which leads to waste in terms of hours spent on justifying its existence, creating job uncertainty, and reducing staff morale.

Reauthorization is still not complete. The Ex-Im bill that passed the Senate in July was part of a bill on transportation, which must also pass through the House before the two chambers can take reauthorization of the Ex-Im Bank forward. A deadline has been set for November 20, so the Ex-Im Bank waits with fingers crossed, with each passing day costing $110 million in exports.

Disclosure: The author is a member of the Ex-Im Bank's Advisory Committee, whose authority lapsed as of July 1, 2015.