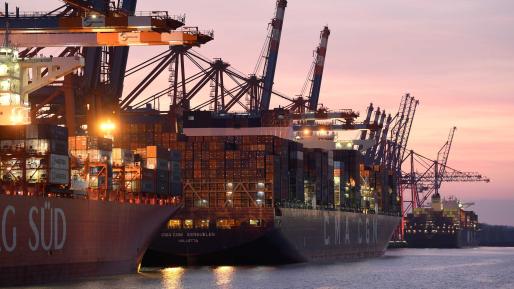 Divergent climate change policies among countries could spark a trade war. The WTO should step in.

Two months before the next big United Nations climate conference in November, the three biggest greenhouse gas emitters—the United States, Europe, and China—are at loggerheads over how to reduce reliance on fossil fuels without excessively disadvantaging their own economies. Their confrontation is based on fears that if each country or region takes tough steps on climate change, the other two players will take unfair advantage in the arena of international trade.

The United States, China, and Europe have committed themselves to raising the penalty for carbon emissions but at different speeds and with different coverage and approaches. Raising the carbon penalty, through taxes, trading systems, or regulations will inevitably make home-produced goods and services more expensive. The fear therefore is that nations with less ambitious efforts will export goods that are cheaper because their penalties are less costly. This fear, in turn, inspires concern in other countries that their exports will be unfairly penalized by protectionist measures. For example, Europe is now threatening a new array of carbon tariffs, while the United States and China are threatening to retaliate. These threats could lead to an escalation of protectionist actions that would undermine the world trading system.

One possible solution to this problem may be to bring in the World Trade Organization (WTO) to adjudicate differences while preserving momentum for tackling carbon emissions. Time is running out if the climate change agenda goals are to be met. The meeting of the 26th UN Climate Change Conference of the Parties (COP26), starting November 1 in Glasgow, will provide a test of whether these competing interests can be reconciled.

Both the European Union and the United States have released border tax proposals as part of their green initiatives. The primary purpose of border adjustments is to prevent "carbon leakage"—shorthand for the risk that high-carbon imported goods, paying little or no carbon fees, will take market share from low-carbon fee-paying domestic firms, thereby defeating the effort to reduce global emissions while harming the domestic industry. But border tax proposals are controversial for two reasons: First, trading partners fear disguised protection that violates WTO rules; second, many observers believe that the proposals, if implemented, will provoke opposition and obstruct cooperative action to reduce global emissions.

After a summer of fires, droughts, floods, and furnace-like temperatures, public demand for decisive measures is overwhelming. The heat wave sweeping northwestern North America in late June 2021 caused 569 heat-related deaths in British Columbia. Meanwhile, in mid-July, China faced devastating floods across central Henan province, leading to 302 deaths and 50 missing persons. Responding to these calamities, China, the United States, and the European Union have proposed updates to their emission reduction commitments, aligning with their own political and economic constraints. The table below summarizes the proposals.

China is the latest to announce new measures. After years of localized pilot programs, China opened its long-awaited national carbon trading market on July 16, 2021. In the initial phase, the scheme covers 2,225 power plants. The government will hand out free allowances to cover firms for part of their emissions. Allowances are benchmarked against previous performance, and firms can trade allowances on the market. A company that has excess allowances thanks to cutting its emissions can sell them; a company that has more emissions than allowances can buy enough to make up the shortfall.

Importantly, China has not yet promised to decrease allowances over time. This is unfortunate since some power plants may relax their efforts to cut emissions and instead just rely on their historic quota of free allowances. While the market currently only covers the power sector, officials have indicated that other high-polluting industries such as steel, cement, chemical, electrolytic aluminum, and papermaking—some of them already covered in local pilot programs—could be covered in later stages.

Meanwhile, China has not proposed border measures, both because its current scheme does not impose high carbon prices and because it disapproves of the border measures proposed by the European Union and United States. Apart from the carbon trading market, Yi Gang, Governor of the People's Bank of China, announced in June that the PBOC plans to launch mandatory climate-related disclosure requirements on domestic commercial banks and subsequently expand the requirements to listed companies.[1]

US and EU legislators propose border taxes on carbon

While China built its emissions trading system (ETS) along lines similar to the European Union, the United States so far lacks a domestic carbon pricing scheme, either through a carbon tax or trading system. However, even without a domestic tax or ETS, a group of Democrats in Congress unveiled proposals for a border carbon adjustment tariff effective January 1, 2024. The scheme would cover carbon-intensive goods that are "exposed to trade competition," including aluminum, cement, iron, steel, natural gas, petroleum, and coal. This list would expand as the United States improves its calculations of the carbon intensity of different goods. Importers would pay a carbon fee based on costs that US producers are calculated to incur complying with domestic environmental standards and the quantity of greenhouse gas (GHG) emissions associated with each covered good, both determined by the Treasury Department.

Building on its mature ETS, the European Union's legislative body, the European Commission, proposed a Carbon Border Adjustment Mechanism (CBAM) to prevent carbon leakage. Goods at high risks of carbon leakage, including iron and steel, cement, fertilizer, aluminum, and electricity generation, are prospectively covered by CBAM. The Commission envisages a transition period between 2023 and 2025, when importers need only report emissions embedded in their products. Border fees will be collected starting in 2026. Importers will buy CBAM certificates (i.e., pay import fees) for covered goods.

The price of the European import fee would differ from the price in the pending US measure. Because the European Union has an operating ETS, the price of its import fee will be based on the weekly average auction price of EU ETS allowances expressed in euros per ton of CO2 emitted. For covered products, CBAM fees will apply to the proportion of emissions that exceed free allowance allocations under the EU ETS, which will gradually phase out from 2026. Importers can claim credits to offset select foreign carbon fees paid on embedded emissions. At a future date, the European Central Bank intends to incorporate climate considerations into its policy framework.

The US and EU border tariffs schemes have prompted opponents to complain about the impact on international trade. US climate envoy John Kerry expressed concerns about the EU CBAM, and Australian prime minister Scott Morrison declared that carbon tariffs are "simply trade protectionism by another name." As an economy that is expected to be hit hard by the border adjustment plans, China also voiced objections, saying that CBAM violates WTO rules, will seriously undermine the principle of common but differentiated responsibilities, will erode mutual trust in the global community, and curb prospects for economic growth .

As carbon tariffs are debated by lawmakers and move through US and EU legislative bodies, their compatibility with WTO rules will be vigorously contested. Importantly, both the US and the EU proposals grant discretionary exemptions to qualified trading partners. While seemingly benign, such exemptions could put border adjustments in violation of the WTO's non-discrimination rule. Furthermore, the General Agreement on Tariffs and Trade (GATT), signed in 1947 and reaffirmed with the creation of the WTO in 1994,mandates in Article III that taxes on imported products should not exceed those imposed on like domestic products. The EU free allowances on CBAM products (which can be seen as a subsidy) and the absence of a US domestic carbon tax both raise national treatment questions.

As a recent Canadian policy paper observes, many countries will adopt their own tax, trading, and regulatory systems to reduce carbon emissions.[2] Most will adopt border measures to avert carbon leakage and market loss by high emitting industries. Foremost the border measures will protect domestic markets against imports, but in some cases export rebates will seek to preserve markets abroad. A multitude of conflicting border measures seems a sure formula for serious trade friction.

To reduce if not eliminate trade friction, WTO members should create an expert body to calculate (and periodically update) the tax equivalent of domestic carbon restrictions—be they fees or regulations—imposed by member countries. Further, each member should give appropriate credit in their border measures, according to these calculations, for taxes or tax equivalents previously paid on imports that arrive from other members. Collectively, WTO members should agree that, when credit is given consistent with the foregoing calculations, no member will bring a case asserting violation of WTO rules with respect to its exports. To be sure, this is a bold proposal, but perhaps within the realm of political acceptance. As a promising first step, members should accept a two-year moratorium on border measures, giving time for serious calculations.

1. The Board of the International Monetary Fund (IMF) recently approvedproposals to include climate change in country economic surveillance or financial stability assessment programs.

2. The International Monetary Fund has stressed that carbon embedded in trade flows accounts for less than 10 percent of total emissions. Accordingly, in the IMF view, border adjustments will create counterproductive friction while proving insufficient to address the climate challenge. Instead, the IMF advocates an international carbon price floor arrangement with different price tiers based on national levels of development.

Why is the EU seeking a carbon border tax adjustment and how would it work?