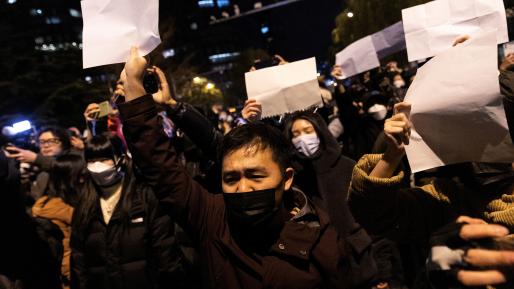 Over three years, the Chinese state has developed sophisticated tools to control COVID-19, using the health code software on people’s smartphones to track their whereabouts and dictate whether they should be sent to quarantine. Now amid protests against the zero-COVID policy and larger grievances against the Chinese Communist Party, there is a worry that these same tools can be used to suppress and punish political dissent. In a frightening harbinger of the potential for abuse in the era of digital authoritarianism, the Chinese state may succeed in its crackdown.

China’s leadership appears to have been taken aback by the protests, which started in Urumqi, Xinjiang, on Friday, November 25, after a fire in a building that had been locked down killed 10 people the previous day. The protests quickly spread over the weekend to major cities and universities throughout the country. To address the protesters’ grievances, some local authorities have begun experimenting with a more relaxed approach to manage COVID infections. The southern city of Guangzhou has now lifted some restrictions, while other parts of the country are maintaining or even doubling down on them. Across the country, authorities are ramping up vaccinations for the elderly, which is a necessary step towards an eventual exit from zero-COVID. But these responses underscore the confusion and flip-flopping of government officials, which also reflects poorly on the party-state.

It should not be taken for granted that the vaccination campaigns for the elderly will succeed quickly. The previous attempt of Beijing’s municipal government to mandate vaccination was met with such a strong backlash that the mandate was dropped just a day after it was announced. Vaccine hesitancy will not go away overnight. Moreover, factors other than vaccination are at play in deciding whether and when China can open up, including the readiness of the healthcare system, especially capacity in intensive care units in hospitals. Therefore, despite the early signs of change, it is too early to tell when China will exit from zero-COVID.

The once unthinkable is happening

Protests do happen sporadically in China, but they are usually random in local areas and focused on specific grievances over policy issues like environment and labor rights, so they are seldom publicized. But demonstrations like those over last weekend, which span regions on a massive scale—some of which calling outright for freedom and political liberalization—have not been seen since the Tiananmen Square pro-democracy movement in 1989.

According to some reports, the protests have died down since the weekend. But they could flare up again, just as protests in Hong Kong did on weekends after lulls during the week some years ago. Whether the death of former president Jiang Zemin will trigger a new wave of demonstrations remains to be seen. Chinese netizens and protestors have shown remarkable ingenuity in demonstrating their fury. On social media, they repeat words like “good” or “correct” to sarcastically express their anger with censorship and the lack of freedom of speech. Out on streets, protestors hold blank sheets of white paper, giving rise to what is now called the “White Paper Revolution.”

But for all this extraordinary behavior, and the belated response of some local authorities to lift the lockdown, political liberalization in China is unlikely. The Chinese populace is very much divided. A silent majority is either indifferent to or supportive of zero-COVID or too afraid to speak up against anything the party-state decides. Many believe that the demonstrations are instigated by evil, opposing forces abroad and the naïve young people who took to the streets are simply puppets of those foreign forces, even though they can hardly identify who these foreign forces actually are. It is doubtful that any foreign force has the capacity to mobilize any protests across China on such a scale. There are different voices even among protesters. Most want a change in the zero-COVID policy but are not calling for regime change.

Rather than liberalizing, political control in China is more likely to be tightened in the future. The state will do whatever it can to suppress challenges to its legitimacy. On many university campuses, students are being sent home earlier than usual for the Lunar New Year break. Emptying university campuses will certainly help to derail any student-organized gatherings or demonstrations for a short period of time around the holiday, at the risk of spreading discontent into students’ home communities.

The censorship machinery is now going all out suspending accounts and deleting posts on domestic social media, trying to erase all evidence that a nationwide movement has happened. Many protestors used social media apps that are blocked in China, including Telegram, Instagram, and Twitter, through virtual private networks (VPNs) to voice discontent and communicate details of their planned gatherings. The authorities have recognized this loophole and are now conducting random checks of people’s devices for banned foreign apps. It is not hard to imagine that China’s Great Firewall may become even harder to get past in the future, and VPN services may be further targeted. The digital crackdown could be long and painful.