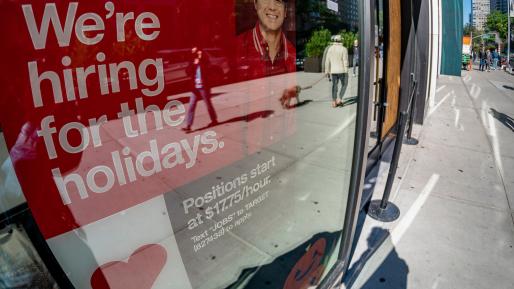 The US labor market remains very tight according to the November employment report. Nonfarm payrolls increased by 263,000 last month—above market expectations of 200,000 (figure 1). Over the past three months, payrolls are up by an average of 272,000 per month; this pace is only half that seen in early 2022, but it is still robust. The unemployment rate was unchanged in November at 3.7 percent, remaining near its lowest level in 50 years, and the labor force participation rate, at 62.1 percent, was still roughly where it was earlier in the year. 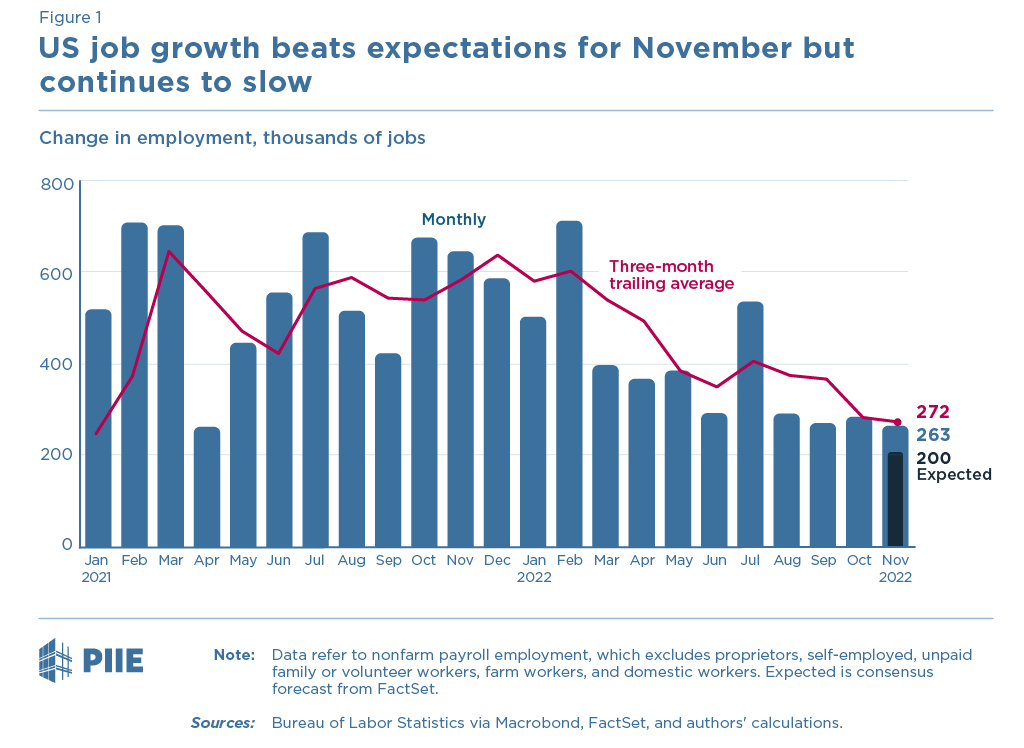 The biggest news in the November employment report involved wages. The 3-month change in average hourly earnings (adjusted for changes in the composition of employment across industry sectors) jumped notably in November, owing to both a larger-than-expected gain in November and upward revisions for September and October (figure 2). At 6.0 percent, the 3-month change has reversed more than half of its decline from the hot pace of wage growth seen in late 2021, when worker shortages were most acute.

Altogether, the developments in US labor markets in November further complicate the Federal Reserve’s job of reducing price inflation. As Federal Reserve Chair Jerome Powell expressed in a speech earlier this week, some progress has been made in rebalancing labor markets, but there is a long way to go. With the 12-month change in the Fed’s preferred measure of core consumer price inflation (the PCE price index excluding food and energy) around 5 percent and moving sideways in recent months, the Fed will likely need to raise the policy rate considerably further.

Average employment growth since June has been slower than the average for the first half of 2022 in most industries, as can be seen by comparing the black lines with the blue bars in figure 3. Payrolls continue to expand most rapidly in high-contact services sectors—entertainment, food services, and accommodation—which took longer to re-open after the worst part of the pandemic and where employment remains notably below pre-pandemic levels. However, payroll growth has slowed considerably in the entertainment and accommodation sectors, suggesting that their recoveries are maturing and labor demand is easing from the red-hot levels of late 2021.

Another sector that has seen a considerable slowing of payroll employment growth is transportation and warehousing. Employment growth in this sector was rapid during much of the pandemic, as consumers focused their spending on goods rather than services to avoid contracting the virus, and shopping moved further online. Labor demand in this sector might be slowing, as real consumer spending on goods has not grown over the past year and the expansion of e-commerce may be abating. However, wage growth remains strong in this sector, which suggests that employment growth might be held back more by a shortage of workers than by a slackening of demand. Even with the recent decline, the level of employment in the transportation and warehousing sector remains well above its pre-pandemic level.

Although the US labor market has cooled somewhat, it remains fairly strong

At 272,000, the average change in nonfarm payrolls over the three months ending in November is nearly 40 percent higher than the average monthly gain in the second half of the 2010s. And, payroll growth continues to be positive in almost all the major industries (figure 3). Nonfarm payroll growth remains positive even in construction, an interest-sensitive industry where activity has weakened since the Federal Reserve began raising interest rates earlier this year.

Employment in temporary help services has been a bellwether of recent recessions—with employment in this category starting to decline a number of months before the business cycle has peaked (figure 4). This series has slipped a bit in recent months after running at high levels during the first half of 2022. The pattern is consistent with a cooling labor market, but, as yet, the cumulative decrease is small and there have been instances where small declines have occurred without a subsequent recession.

One benefit of tight labor markets is that they tend to close employment gaps between workers who are traditionally more and less advantaged. Such gaps narrowed in the robust pre-pandemic labor market and are relatively narrow now (figure 5). The unemployment rate for workers who stopped their education with a high school diploma is currently only 1.9 percentage points above that for workers who have a bachelor’s degree or higher—about as large of a gap as that seen just before the pandemic and only about one-third the size of the gap seen at the same point after the onset of the 2007-2009 “Great Recession”. A similar pattern holds for the difference between the unemployment rates of Black workers and white workers, and the gap for those with and without a disability has also fallen to a relatively low level.

Similarly, US labor markets are strong throughout the country. The final set of bars in figure 5 shows the gap between the 90th percentile of state unemployment rates and the 10th percentile of state unemployment rates. Right now, the gap stands at just 1.7 percentage points, at the low end of its historical range. As with the other gaps, it is similar to what was seen during the strong labor markets of the late 2010s and early 2020 and well below its level almost 3 years after the onset of the Great Recession.

Wages, though rising, aren’t keeping up with inflation for most workers

A key difference from the late 2010s is that, because of high inflation, most workers are experiencing declines in their real wages. Wages are growing most rapidly in the leisure and hospitality, information, and transportation and warehousing sectors, where gains over the past 12 months have been between 6.5 and 9 percent (figure 6). The wage gains for these industries—which represent about 20 percent of employment—are above the 12-month change in consumer prices. In other sectors, wage increases have fallen short of consumer price increases (except for construction and utilities, where average wage growth has roughly kept up with inflation). 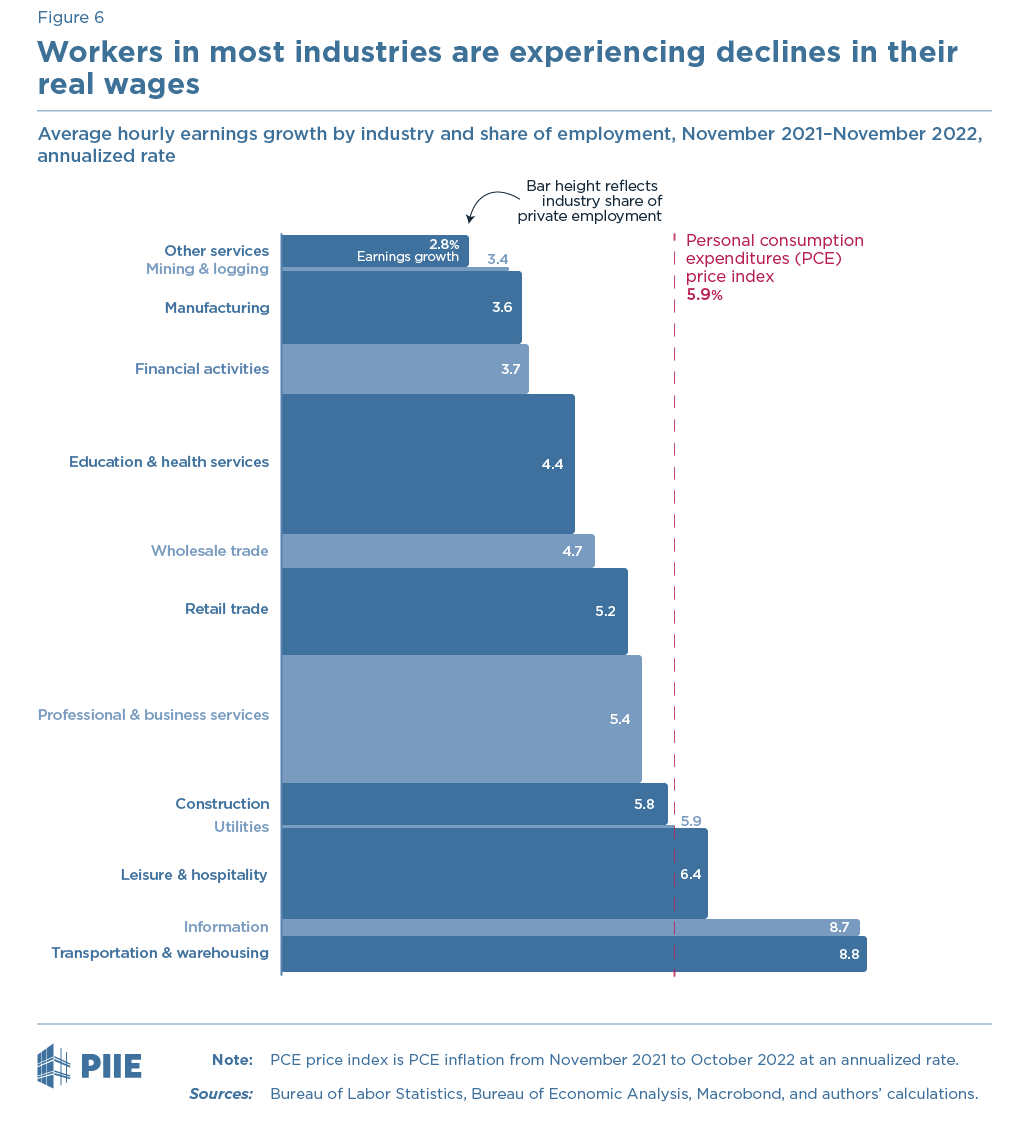 The Fed’s fight against inflation needs to continue

Inflation in the United States remains well above the Federal Reserve’s goal of 2 percent, eroding the purchasing power of income for most workers and creating true hardship for some. The November employment report suggests that demand and supply in the labor market are moving—gradually—into better alignment. However, the current pace of wage growth is still considerably higher than that consistent with the Fed’s goal, and key measures of labor market tightness, such as job openings per unemployed worker and the quits rate, remain well above their historical averages.

Creating more slack in the labor market will require a further softening of aggregate demand, implying that the Federal Reserve will need to continue tightening financial conditions until it can be confident that the necessary labor market slack has been created. As a result, the unemployment rate is likely to rise, perhaps considerably, and job losses will probably be disproportionately concentrated among less-advantaged workers. These significant costs underscore the importance of a robust US safety net. But not acting now to bring down inflation would raise the risk that inflation becomes stuck at a high level or rises further, and restraining inflation at that point would require an even sharper and more costly reduction in economic activity.

Wages in most US industries are not keeping up with inflation