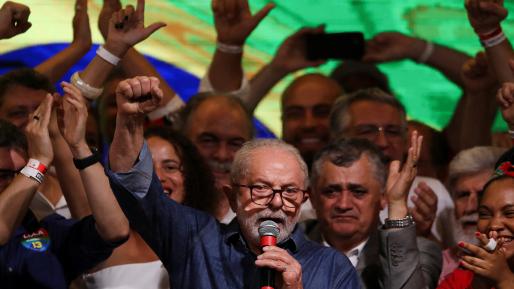 Lula is back, but can he fix Brazil’s new problems?

The election victory of Luiz Inácio Lula da Silva, popularly known as Lula, in Brazil returns to power a well-known leader with a widely admired track record established when he served as president in 2003-11. Lula’s defeat of Jair Bolsonaro, the far-right authoritarian incumbent, occurred against a backdrop of staggering polarization over many years.

But while Lula’s victory is critical for the fate of Brazilian democracy, his third term in office faces problems he has not encountered before. These problems complicate or even hobble his agenda of liberal reform—expanding social services to the poor and protecting the Amazon rainforest—for which he achieved credit in the past.

Brazil’s political landscape is not what it was when Lula took office in 2003. Its economy then was struggling but also benefiting from global trends, including rising commodity prices and abundant capital flows. These conditions paved the way for the delivery of social programs— the main campaign promise that brought Lula to power—and macroeconomic stability.

Lula’s spending programs helped lift millions of Brazilians from poverty, and his policies delivered fiscal surpluses, economic growth, declining unemployment, and decreasing inflation throughout his first four years in office. Despite a big corruption scandal at the end of his first term, Lula was easily reelected. His second term was also hailed as a success, particularly as Brazil deployed fiscal and monetary expansion to stave off the risk of a deep recession resulting from the global financial crisis of 2008-10. Leaving office at the end of 2010, Lula was Brazil’s most popular president in recent memory. Some years later, a second corruption scandal landed Lula in jail for two years. The sentence and some of the accusations were subsequently reversed, allowing Lula to run for office this year.

All presidents of Brazil since redemocratization in the late 1980s have had to form coalitions among rival factions in the Brazilian Congress in order to govern. That challenge played to Lula’s strengths as a negotiator and politician, skills he will need even more now than before to succeed.

Brazil’s political system remains highly fragmented, but the rise of anti-democratic groups within existing political parties has made navigating the system far more difficult. Coalition-building now pits the pro-democracy camp against the anti-democracy forces loyal to Bolsonaro. This new dynamic compelled Lula and his Workers’ Party (Partido dos Trabalhadores) to reach out to long-time political adversaries to compose his winning “Democratic Front,” a unique coalition involving ten parties that brought him to power. His new government will, therefore, need to negotiate internally to maintain stability within the front, but it will also face backlash from several Bolsonaro allies who have won congressional seats in the latest election. Efforts to pass key pieces of legislation to enact economic reforms, such as tax reform, will involve a much more complex interplay of internal and external political negotiations.

Economically, Lula will inherit a damaged country on January 1, much of it resulting from Bolsonaro’s policies weakening institutions, dismantling environmental regulations and agencies, and disregarding social programs. The nation’s crumbling fiscal framework needs to be rebuilt. Bolsonaro oversaw the return of hunger and malnutrition in Brazil, a rise in poverty, and one of the worst track records in fighting the pandemic—nearly 700,000 deaths from COVID-19 since 2020.

Most dramatically, deforestation in the Amazon region came back with a vengeance, turning Brazil into a pariah in the global fight against climate change.

Brazil’s economic outlook is grim, despite some macroeconomic indicators suggesting otherwise. Inflation is running moderately at 6.5 percent year on year, while growth is set to come out at roughly 2.5 percent in 2022. But these indicators are deceptive. Falling inflation results from a forced reduction in fuel taxes earlier this year, while growth is inflated by unsustainable spending directed in the last year or so to segments of Bolsonaro’s base. The budget negotiated and approved for 2023 leaves no room to address Brazil’s most pressing social needs, such as combating hunger and childhood malnutrition.

As a consequence, Lula 3.0 will begin with the daunting task of negotiating a new budget and adjusting caps on spending with a relatively skeptical or even hostile Congress, while proposing changes to Brazil’s flailing fiscal framework. The spending that Lula would seem to advocate will require Constitutional amendments, posing additional political challenges.

Signaling that he is in a hurry, Lula has already announced that he will not run for re-election in 2026. His focus should be understood as establishing his legacy, rescuing his track record of a pragmatic leader who was responsible for major social transformation and social mobility in Brazil. While he cannot eliminate a hostile external environment that he had not faced before,  he can give Brazil some sense of normalcy following the lunacy of the Bolsonaro years. His political skills are considerable, but the next four years will put them to the test.