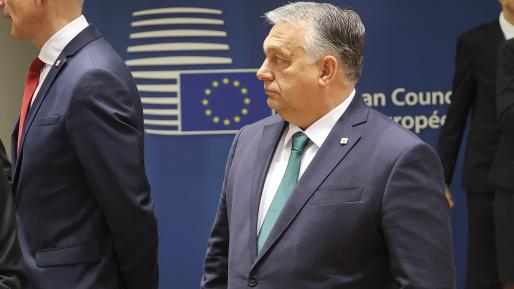 Prime Minister Viktor Orbán of Hungary, the authoritarian champion of what he calls Chinese and Russian-styled “illiberal democracy,” has rankled EU leaders over his vetos of EU aid to Ukraine and EU accession to the widely supported global minimum corporate tax agreement. But in order to get his hands on as much EU cash as possible in the years ahead, Orban has suddenly dropped the vetos in return for vital transfer payments from Brussels in a deal reached late on December 12.

Brussels, however, didn’t give Hungary much funding in return and continues to hold up more than €12 billion in transfers to Budapest over concerns about Orban undermining Hungarian democracy and anti-corruption efforts. At least instead of outright losing all EU funding, Hungary gets a chance to implement required reforms to unblock remaining funds. And the European Union can now fund Ukraine in a timely manner in 2023 and begin implementing the landmark corporate tax reform promoted by the Organization for Economic Cooperation and Development (OECD), leaving the US Congress as the main obstacle to its global enactment.

Hungary’s gradual slide away from democracy over at least the last decade, and the European Union’s unwillingness to confront it, has lit a slow-burning fire under the bloc. Former German chancellor Angela Merkel tainted her legacy by sheltering Orban’s party inside the center-right European People’s Party (EPP) until last year. This arrangement has undermined the EU’s capacity to act more decisively against Russia. Now a combination of priorities at EU political institutions and Hungary’s deepening economic problems could open the flow of EU financing to Orban’s government. But this deal could also backfire against Hungary.

A large majority in the European Parliament has become increasingly vocal in its opposition to releasing any EU budget funds to Hungary over its backsliding on democratic values, undermining free elections and curbing effective oversight of EU funds in Hungary. The European Parliament cannot block funds for Hungary but does hold sway over funding oversight and can pressure the European Commission.

Commission president Ursula von der Leyen's political situation is a factor in the EU’s decision-making. She was confirmed in 2019 with a slim majority of less than 10 votes, and would likely lose a vote for a possible second term starting in 2024, if the Commission under her watch were to release all the money due to Orban; the Parliament, rocked by a current corruption scandal over allegations that some of its of members received large sums of cash from Qatar, could conceivably use that as a pretext to impeach her in an attempt to divert attention away from their own political problems.

In December the European Commission maintained its assessment that Hungary had not fulfilled its rule of law commitments, recommending to EU member states to withhold from Hungary €7.5 billion of regular EU budget transfers and €5.8 billion from the pandemic Recovery Fund.

Some EU member states, seeking to salvage unanimous support among EU members for Ukraine and the global minimum tax, pressed the Commission to water down its recommended punishment for Hungary. The compromise, settled on December 12 under the rotating Czech EU presidency, represented a dramatic political and economic defeat for Orban.

Under that deal, the EU Commission and the other 26 EU member states agreed to reduce the level of blocked regular EU budget funding for Hungary from €7.5 billion to €6.3 billion, effectively giving Orban an additional €1.2 billion in 2021-27. As part of the compromise deal, the Commission formally approved the disbursement of €5.8 billion from the COVID-19 Recovery Plan to Hungary, contingent on Orban first implementing 27 “super milestones” changes to Hungary’s rule of law framework, judicial independence, and other steps to reverse the country’s anti-democratic slide. The disbursement is to be rolled over into future years, adding to Hungary’s incentive to implement the reforms and convince investors to buy Hungarian government debt this year. If the financial market’s assumption is that the Commission will not budge on reform conditionality (which seems highly likely), and that Orban cannot ultimately undo his autocratic slide, the true value of the disbursement rolled over into future years will be zero.

The deal reflects the EU’s decisiveness and flexibility while leaving Hungary under economic pressure. And if Orban's political allies in the Polish government lose power in 2023, Hungary would lose votes in the EU Council protecting it against political sanctions under the EU Treaty’s Article 7 in the future. If that happens, Hungary could lose its own vote on the EU Council and face political irrelevance.