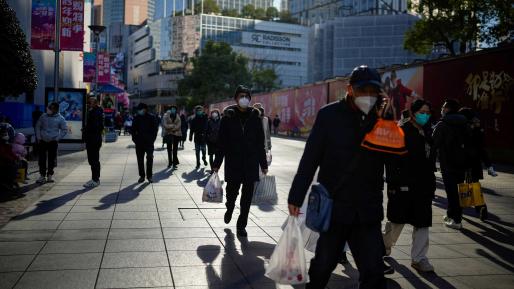 China’s chances to resuscitate its bleak economic growth now depend more than ever on increased consumer spending, as the nation’s economic policymakers have made clear. But after a year of dismal economic performance, aggravated by the zero-COVID lockdowns, the obstacles to revive growth through private consumption remain daunting in the near term. But when the COVID situation stabilizes and household expectations on income and jobs improve in a few months, households will start to consume more, and private consumption will recover gradually later this year.

With surging COVID infections, population mobility in much of China declined drastically in December. COVID infections reportedly may have already peaked in some of China’s largest cities, including Beijing and Shanghai, and rural China will likely see surges of infections later in January when most migrants return to their home villages for the Chinese New Year. Until the COVID situation stabilizes and people feel free to move about again, consumer confidence and household expectations on jobs and income will remain weak. Moreover, given households have parked much of their savings in less liquid assets like time deposits with longer maturity in order to gain higher returns on those savings, they cannot draw upon much of their savings for consumption right away. Household consumption will likely recover only gradually.

China’s mid-December annual Central Economic Work Conference highlighted increasing private consumption expenditure as a “priority task” for reviving China’s economic growth. But conference attendees were silent on what policies might facilitate this goal. In an environment of slumping investment and industrial production, uncertain export prospects, and declining property values, consumption is vital for economic growth. But the pace of household consumption growth has been slow in recent years. Private consumption has accounted for less than 40 percent of GDP in recent years, a sharp decline from levels during the first two decades of economic reform in the 1980s and 1990s and well below the level of 60 percent or more in most Organization for Economic Cooperation and Development (OECD) economies (see figure 1).

In the decade before COVID, China did achieve some success in reorienting its economy towards greater consumption-led growth. Between 2010 and 2019, private consumption as a share of GDP went up from 34 percent to 39 percent, even though household disposable income as a share of GDP barely changed during the same period. Household saving as a share of disposable income also declined from 42 percent in 2010 to less than 35 percent in 2019 (see figure 2).[1] Part of this success was driven by a strengthened social safety net, i.e., government spending on items like health care, retirement, and unemployment benefits, encouraging citizens to consume instead of saving for the future or for a medical emergency. For example, according to the World Health Organization, the share of out-of-pocket household health expenditures in China has dropped from more than 60 percent in the early 2000s to 35 percent in recent years, suggesting that the coverage of medical insurance has widened in China.

But COVID wreaked havoc on that progress. Unemployment rates, especially among the young, increased, while both consumer confidence and household income expectations weakened, causing savings to rebound to 38 percent of disposable income in 2020. Chinese households are now sitting on top of a mountain of savings deposits roughly the equivalent of China’s GDP.

Surveys suggest that consumer appetite for spending remains weak. According to a survey conducted by the People’s Bank of China (PBOC), in the fourth quarter of 2022, only one-fifth of depositors said they would consume more, and more than 60 percent were in favor of even more savings deposits. The PBOC survey also shows households' expectations on income and jobs further worsened in the last quarter of 2022, with nearly 90 percent of respondents seeing their income stagnate or drop and more than 90 percent observing a worsening job market. All this suggests that a rapid rebound in consumer spending in the immediate term is unlikely.

Over the long term, a transition back towards a consumption-led growth model will require expanding household disposable income and further strengthening of the social safety net. Ending zero-COVID lockdowns, which drove millions of workers out of the labor force, will boost incomes. Social programs still cover too few people with only modest benefits and should be expanded. In essence, China needs to spend more on its people if it wants its people to spend more. But none of these changes can be accomplished in the near term, suggesting that increased consumption—and its contribution to China’s economic recovery—will be modest.

1. Data on household savings and disposable income are from the flow of funds accounts compiled by the National Bureau of Statistics of China but are published with a 2-year lag. The latest flow of funds data available are for 2020.