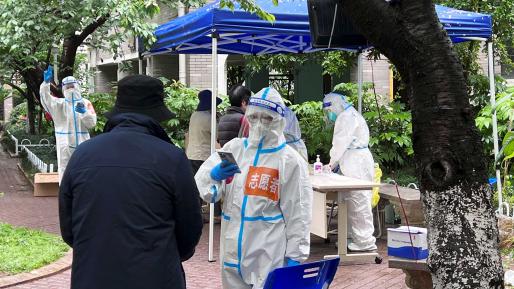 "Zero-COVID" in Shanghai comes at high social and economic costs

At a time when the rest of the world has decided to live with the coronavirus, China is sticking to its zero-COVID-19 policy, trying to eliminate the disease at virtually all costs. Shanghai has been under complete lockdown for half a month, as the highly transmissible Omicron variant is contributing to the country's worst COVID-19 outbreak since the initial Wuhan outbreak in early 2020. Chinese economists previously estimated a lockdown of this length would cost the country as much as 4 percent of national real income. If that estimate holds, the Chinese government cannot hope to make its already ambitious 5.5 percent growth target for 2022 without extra stimulus.

China could have used this latest outbreak as an opportunity to revise its zero-COVID-19 policy but has instead chosen to stick with mass testing and isolation regardless of the enormous social and economic costs. There is now growing discontent among the 25 million residents in Shanghai over how the outbreak and the lockdown are being handled. People are running out of food and food prices are skyrocketing. Deaths from COVID-19 have been rare, but the draconian lockdown measures have led to an increasing number of non-COVID-19 deaths, including a series of incidents in which seriously ill patients died after being denied urgent hospital care. The Shanghai government is facing not only its most severe public health crisis in decades but also an unprecedented crisis of trust.

The Shanghai and Wuhan outbreaks differ significantly in that the majority of those who have contracted the virus in Shanghai have no or mild symptoms—that is to say, 97 percent of the more than 250,000 residents who have tested positive since March. Moreover, only 9 infected patients who have developed severe symptoms are being treated at hospitals, according to the Shanghai Municipal Health Commission.[1] Zero death from COVID-19 has been reported since March, which may have something to do with the Chinese practice of not identifying deaths of most COVID-19 patients with underlying conditions as deaths from the virus.[2]

The internal frictions among officials over zero-COVID-19 policy and lockdowns were intense in earlier phases of the Shanghai outbreak, but those who advocated taking the outbreak as an opportunity to revise the policy clearly failed to convince the leadership that mass testing and isolation are no longer the most cost-effective solutions serving the best interest of the country. Vice Premier Sun Chunlan of the State Council is now in Shanghai to ensure local officials fully implement the zero-COVID-19 policy, and the party chief in Shanghai now seems marginalized.

The Chinese leadership's caution may stem from the fact that the elderly population has low vaccination rates, and domestically developed inactivated vaccines have low efficacy. While nearly 90 percent of the Chinese population is fully vaccinated, vaccination rates among the elderly are lower: 82 percent for those between 70 and 79 years old, and about 51 percent for those over 80 years old as of mid-March. Shanghai has one of the highest proportions of elderly in the country, with nearly a quarter of its residents aged 60 or older. Given the weakness of China's health infrastructure, giving up "zero-COVID-19" could lead to a surge in hospitalizations among the elderly and overwhelm the medical system.

Following the outbreak in Shanghai, cities elsewhere in the country are now taking extra precautions to avoid a similar fate, even in locations where daily new infections only number in the double digits. Some 23 Chinese cities are now under partial or full lockdowns, according to the brokerage firm Nomura, while cities like Guangzhou are now testing all their residents. It looks like zero-COVID-19 is here to stay, at least for a few more months until the 20th National Congress of the Chinese Communist Party is held in the fall.

The Shanghai municipal government was obviously ill prepared when it announced a phased lockdown just hours before it went into effect. The day before the lockdown was announced, local health authorities were still telling the press that the city was too important to the national economy and thus a city-wide lockdown would not be considered as costs would be too high.

More than two weeks have gone by since then, and millions of residents in the city have witnessed complete inconsistency in policy. The initial plan was to put the east half of the city, an area referred to as Pudong, under lockdown or what the government calls "static management" for four days, immediately followed by another four-day lockdown of the west half of the city, Puxi. However, as daily infections continued to rise by the day, an indefinite extension of the lockdown was announced on the day when all restrictions were supposed to be lifted. Now entering the third week since all of Pudong was first put under lockdown, daily infections across Shanghai remain as high as over 20,000, and it is unclear when the turning point will occur. Most recently the government said residents living in residential compounds where no infections had been reported in the last 14 days could leave their homes and move around in their neighborhoods, only to reverse course once again and reimpose the stay-at-home order on most neighborhoods. The US State Department is now ordering its Shanghai consulate staff to leave the city.

One result of the protracted lockdown is that residents are running out of food. Shanghai is confronting its most serious food shortage in decades, something one would have never thought would happen in one of the wealthiest cities in China. Prices are rising so fast, especially for fresh produce, that the market regulator has had to intervene to rein in runaway food prices.

What caused the food crisis in Shanghai is not a supply shortage per se, especially as the rest of the country has been sending fresh produce and food to the city every day, but an insufficient delivery workforce and logistical bottlenecks. Given no one can leave their homes or apartment buildings, door delivery is the only option for people to access food and other necessities. But all online grocery platforms, including Meituan, Dingdong, and Alibaba's Hema, are overwhelmed, and their apps are constantly crashing, making it virtually impossible to place orders. Meanwhile, like most of Shanghai's 25 million residents, most delivery workers are confined at home themselves and are also struggling to access food.

Local district governments have sent free food packages to all households, but those are far from enough. Desperate city residents are now resorting to "group-buying," meaning residents in the same residential compound band together to buy groceries in bulk or meals from the same suppliers, which then make deliveries to the same address. "Group-buying" has become a lifeline for residents in Shanghai, especially for the elderly population who are less tech-savvy and do not know how to place online grocery orders on smartphones. Naturally, white collar workers who have to be on their phones all day trying to get deliveries cannot be as productive working from home, which compounds the effects on the economy.

What makes things worse is that Shanghai relies heavily on food supplies from the rest of the country to feed its residents,[4] but local governments in areas neighboring Shanghai, worried about virus transmission in their own jurisdictions, have erected roadblocks, shut highways, and required lorry drivers returning from Shanghai to quarantine for at least two weeks, leaving the domestic logistics chain severely broken.[5] The situation in recent days has improved marginally with the central government now asking local officials to keep highways open.[6]

On top of the food crisis, multiple incidents are sparking widespread public outcry over the government's ill-guided anti-COVID-19 measures. The draconian lockdown measures have led to a number of non-COVID-19 deaths that could have been avoided, including a nurse who died of asthma after being denied treatment from her own hospital.[7] Moreover, COVID-19-positive children were put under quarantine separated from their parents, a policy that was later eased amid widespread public anger, while a pet dog was beaten to death by a health worker after its COVID-19-positive owner who was taken to a quarantine facility had released the dog onto the streets hoping it would survive. The public has responded to these incidents with an outpouring of criticism, exhibiting a severe lack of trust in public institutions.[8]

The production of virtually all goods and services in Shanghai, except in certain industries considered strategically important like semiconductors and financial services, has come to a sudden stop that will undoubtedly result in significant losses of people's livelihoods and to the entire Chinese economy. Results from a recent flash survey conducted by the German Chamber of Commerce in early April show the lockdowns have already significantly disrupted the entire supply chain within China, with over half of German companies' logistics and warehousing completely disrupted or severely impacted by the government's preventive measures, and 40 percent reporting complete disruption or severe impact on upstream supply chain operations due to a lack of raw materials or upstream products.

The private sector, small and micro enterprises, household businesses, and the migrant workforce will be among the hardest hit segments of the economy. In an article published by Caixin last week that was soon removed by government censors, economist James Liang made a cost-benefit analysis over different pandemic preventive approaches, suggesting that with the highly transmissible Omicron variant, the cost of containment is higher than ever, and zero-COVID-19 is no longer a policy that serves the best interest of the country, as it could result in higher unemployment and more people falling back into poverty. A previous study by a group of Chinese economists suggests that a half-month full-scale lockdown in Shanghai would result in a 4 percent loss of the national real income. Given the growth target set by the Chinese government at around 5.5 percent for 2022, which is an ambitious target even without considering the impacts of the latest COVID-19 outbreaks, extra domestic stimulus will be needed if China wants to avoid a sharp slowdown of its economy.

1. The unusually high rate of asymptomatic cases among the reported COVID-19 infections is at least partly explained by the less strict diagnostic criteria adopted in Shanghai. In other words, mildly symptomatic cases are included in the asymptomatic tally, according to Reuters.

2. The Wall Street Journal previously reported that the real numbers of infections and deaths in Shanghai may be greater than the official statistics.

3. A recent study on the comparative effectiveness of mRNA and inactivated vaccines in Singapore shows that individuals vaccinated with the mRNA vaccines are less likely to be infected with COVID-19 and develop severe disease than those who received China's Sinovac and Sinopharm vaccines.

4. In 2020, about 80 percent of the food supply in Shanghai was from elsewhere in China.

5. Reportedly some lorry drivers have stayed in their vehicles for up to a month because of the many restrictions on cross-provincial travel that have been in place since before the Shanghai lockdown.

6. On Chinese social media, content about Shanghai's food crisis is being censored.

7. These incidents are mostly reported by family members or coworkers on social media and have yet to be verified. They include at least one dialysis patient who tested positive for COVID-19 and died after several days of being denied access to treatment at any hospitals, a doorman of a residential compound who died from overwork, and a woman who committed suicide after being cyberbullied for paying RMB200 to a delivery worker who helped deliver home-cooked food to her hearing-impaired father living 27 kilometers away in a suburban district.

8. Most recently, Shanghai Dragon Television, the provincial satellite TV station wholly owned by the Shanghai Municipal State-owned Assets Supervision and Administration Commission (SASAC), had to postpone its planned broadcast of a so-called anti-epidemic gala, where a group of celebrities were to perform, due to harsh criticisms and a boycott by the city's residents who asked the TV station and its reporters to focus instead on reporting the hardships people are experiencing and investigating soaring food prices.