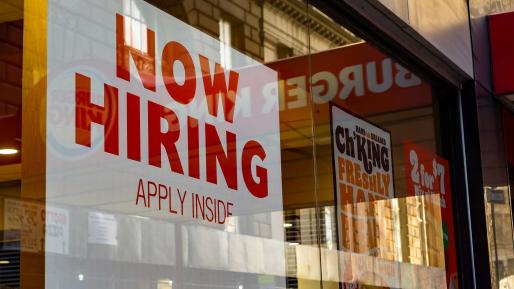 The economy added 199,000 jobs in December, below the average pace of job creation for the rest of the 2021. The unemployment rate continued its rapid decline falling to 3.9 percent as labor force participation was flat. Nominal wages continued to reflect the very hot labor market, growing at a very rapid 0.6 percent pace, faster than the pace over the first 11 months of the year.

These data likely do not fully reflect the impact of the Omicron wave that has risen rapidly since the middle of December. However, it is possible that the Omicron wave may end up more like a hurricane that temporarily disrupts the economic data for January so that the December data more accurately reflects the underlying state of the economy.

Looking back at the labor market since COVID-19 hit in March 2020, the unemployment rate has been elevated by a cumulative 6.5 percentage point years, relatively typical for post-war recessions—and much better than the cumulative 20.5 percentage point years of elevated unemployment rate following the 2007-09 financial crisis. Despite the high initial increase in the unemployment rate, it fell quickly as the economy reopened, and at a considerably faster-than-expected pace in 2021. In 2021, total jobs grew 4.6 percent, the seventh fastest year of job growth since the aftermath of World War II.

Overall, the economy is still 4.4 million jobs short and 2.7 million workers short relative to pre-pandemic projections (adjusted for changes in population growth). Continued accommodative monetary and fiscal policy is likely to continue to close the gap in 2022, but near-term progress may be choppy given the extremely rapid rise of the Omicron wave.

The Labor Market Is 4.4 Million Jobs and 2.7 Million Workers Short of Normal

The gap between the labor market and normality narrowed slightly in December, but the economy remains 4.4 million jobs short of pre-pandemic projections adjusted for population as shown in figure 1 (or 5.6 million jobs short of the original pre-pandemic projection). We use the Congressional Budget Office (CBO)'s January 2020 forecast for a projection of where jobs might plausibly have been absent the emergence of COVID and the economic response it engendered. The civilian noninstitutional population age 16 and older in December 2021 was 2.2 million (or 0.8 percent) lower than CBO had originally forecast, with excess mortality and reduced immigration both large factors. By scaling down CBO's original employment forecast by 0.8 percent we are effectively assuming that CBO was projecting employment rates not employment levels. (Note, the employment rate of people who have died because of COVID was likely lower than the CBO average but the employment rate for missing immigrants would likely have been higher than CBO forecast so the two errors in this simple adjustment likely roughly cancel out.)

Looking at the household survey's measure of the number of workers employed shows a considerably smaller gap than the employer survey's measure of the total number of jobs. In total, 2.7 million fewer people were employed in December 2021 than had been expected pre-COVID (again adjusted for population) as employment growth (the number of people surveyed who said they had jobs) outpaced job growth (the number of employers reporting a job) in 2021. Two of the reasons the employment shortfall is smaller than the jobs shortfall is that, since February 2020, multiple job holders have fallen by 0.7 million (this results in fewer jobs without any reduction in employment) and self-employment has risen by 0.3 million (this counts as employment but not as a job). Other issues, including different CBO forecast paths and other definitional and measurement differences, account for the remainder of the difference between the jobs and employment shortfalls. 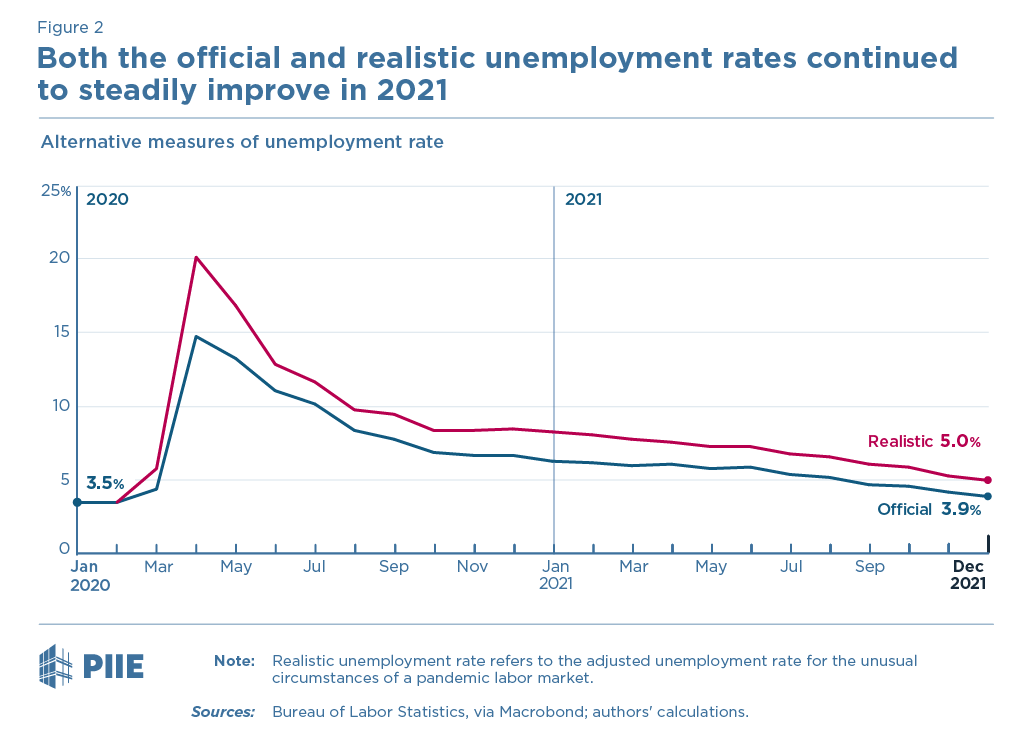 As COVID initially hit, the economy and the official unemployment rate rose to 14.8 percent in April 2020 (or 19.5 percent counting misclassified workers) and many worried that we were on the verge of a second Great Depression. Since May 2020, however, the unemployment rate has fallen sharply and as of December 2021 was only 0.4 percentage point above its pre-COVID value.

Since the start of the pandemic, the unemployment rate has been a total of 6.5 percentage point years above its 3.5 percent level in February 2020, the median increase over the past 11 business cycle (treating the 1980s business cycles as one), as shown in figure 3. This is only a third as large as the increase following the 2007-09 financial crisis when the somewhat smaller but much more prolonged increase in the unemployment rate totaled over 20 percentage point years. 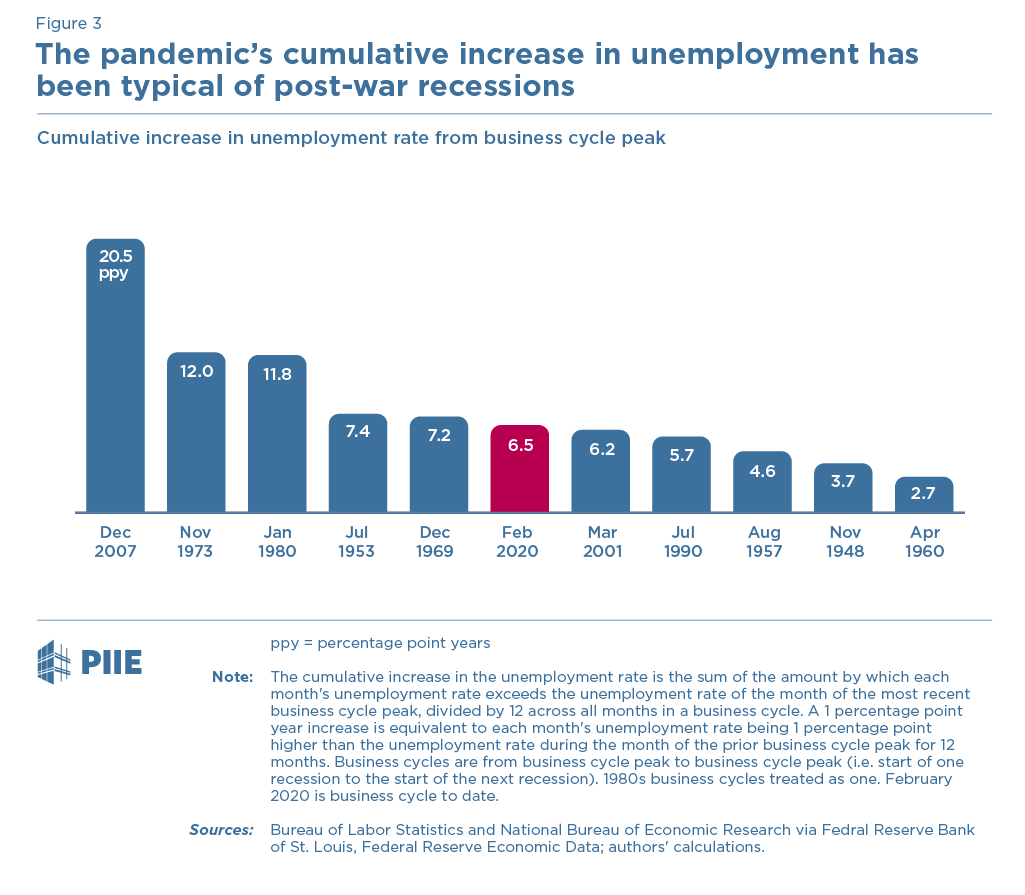 Employment started growing rapidly in May 2020 and rapid growth continued in 2021. The economy added an average of 537,000 jobs a month last year. In percentage terms, employment growth in 2021 was the 7th highest since the aftermath of World War II and the fastest in over 40 years, reflecting the rapid recovery from the pandemic and the large fiscal and monetary stimulus (figure 4). 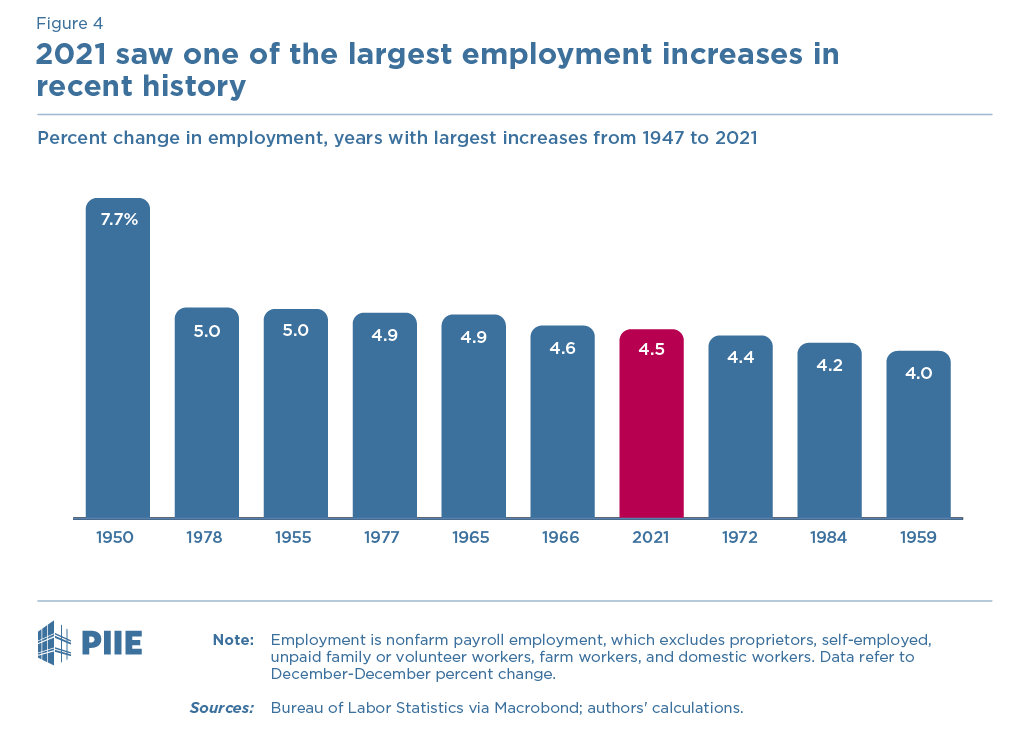 Overall, the pace of job growth in 2021 was broadly consistent with forecasts from earlier in the year reflecting the combination of a faster-than-expected decline in the unemployment rate but also a slower-than-expected recovery in the participation rate. Figure 5 shows the median forecast of the unemployment rate from the Survey of Professional Forecasters, which surveys leading economic forecasters every three months. (We make minor assumptions to produce monthly numbers broadly consistent with their reported quarterly and annual values.) The unemployment rate in December was 3.9 percent, well below the 5.7 percent forecast made in November 2020 or the 4.8 percent forecast made in May 2021. 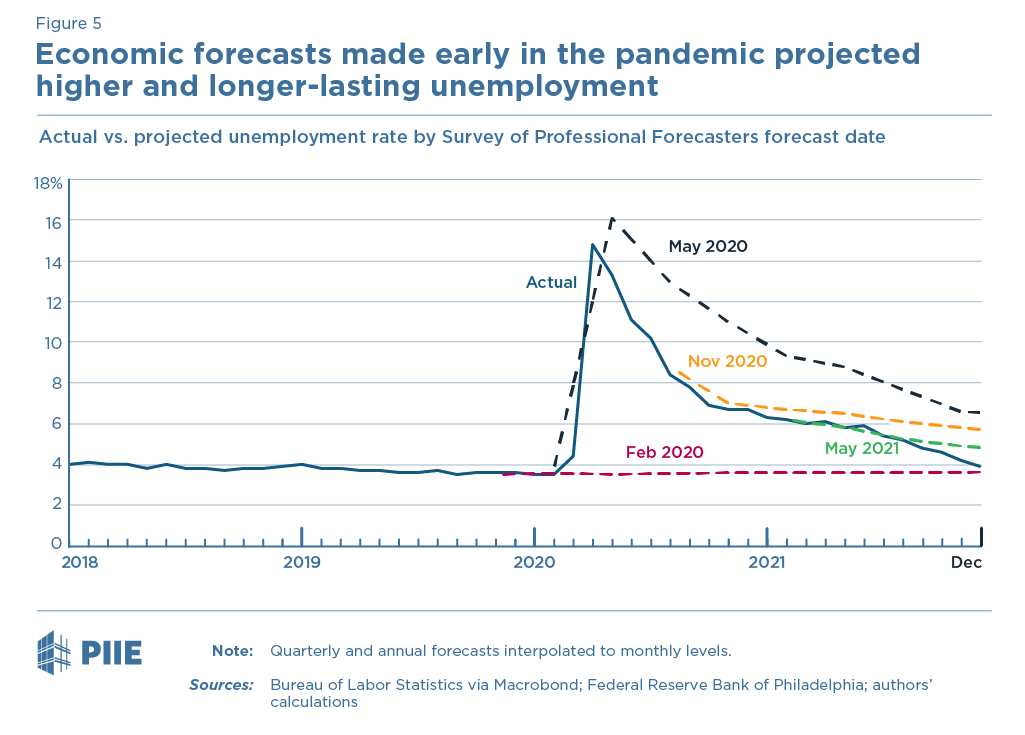 Employment Rates Fell Across the Board – Except for the Youngest Workers

Looking more granularly, except for those ages 16-24, the employment rate has fallen for each age group for both men and women shown in figure 6. Aside from women ages 16-24, the decline in employment rates for women was generally similar across age groups, at around 1 percentage point (somewhat larger for ages 45-54 and somewhat smaller for ages 55-64). For men, however, there was more variation, with men ages 16-24, 45-54, and 75 and older experiencing relatively smaller declines in employment. 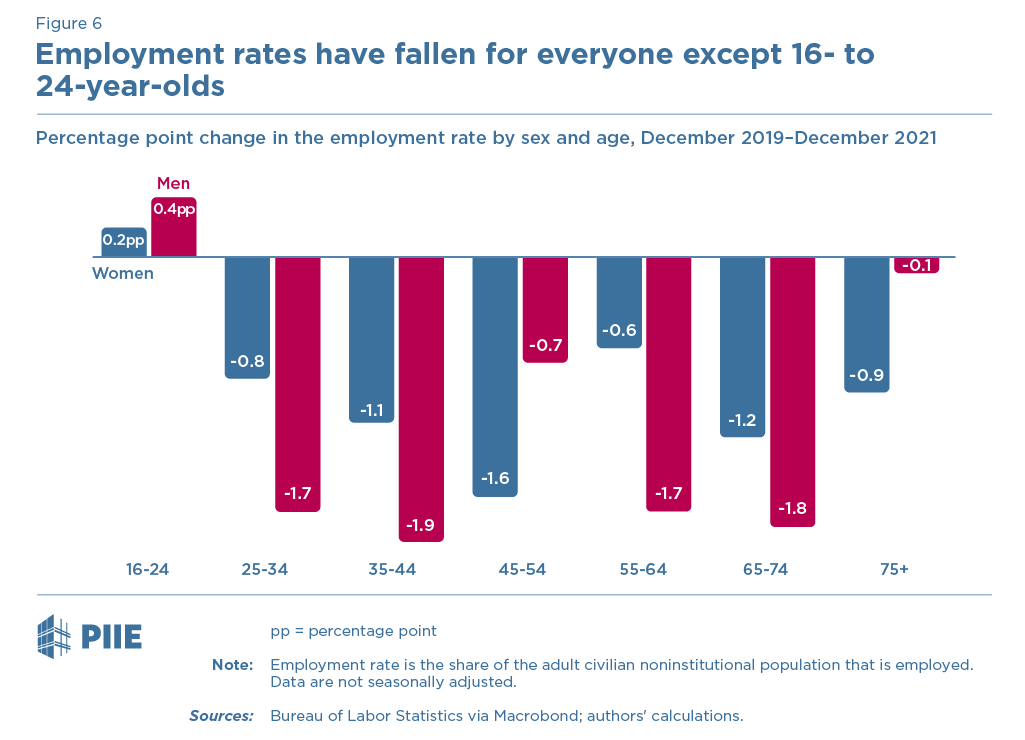 Different labor market indicators are sending different signals. The prime-age (25-54) employment rate shows slack in December near its average from 2001 to 2018 (a period when the economy was, on average, below full employment). The unemployment rate was somewhat below its average over that period while the ratio of unemployed to job openings indicated a very tight labor market and the quits rate (for November, the most recent month available) indicated an extremely tight labor market (figure 7). 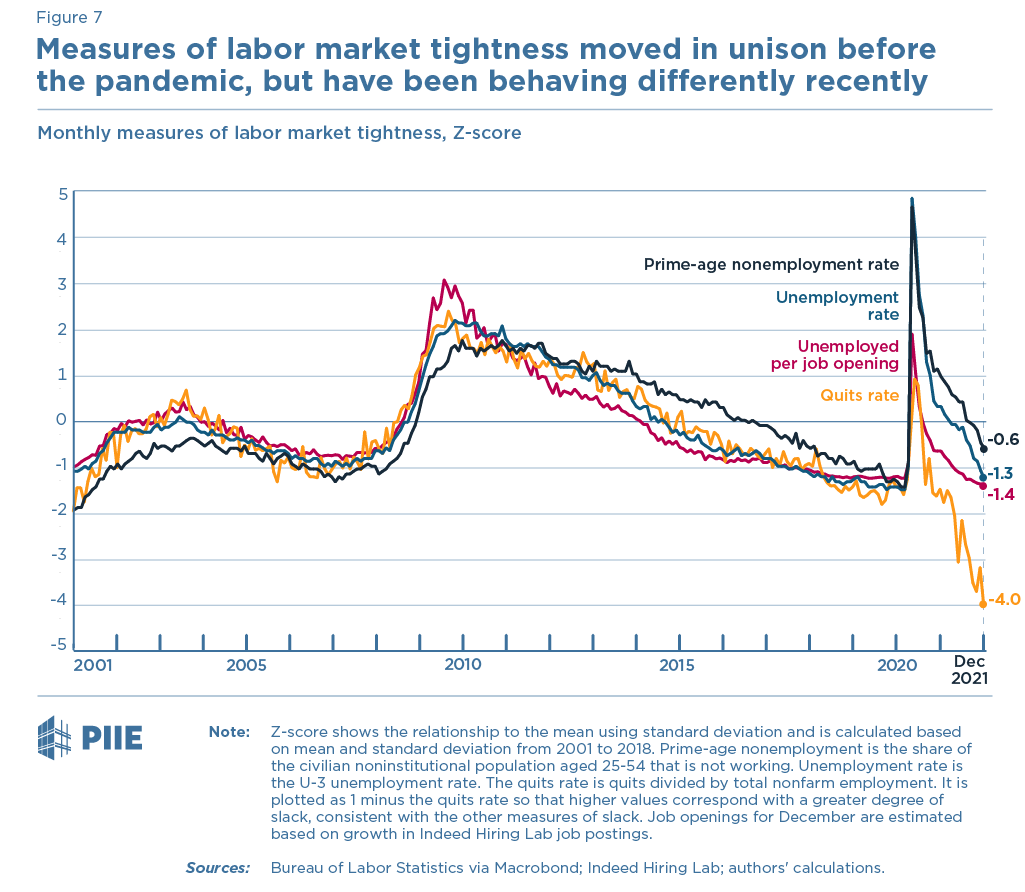 In November, we investigated which of these measures was the best predictor of wage growth or inflation based on the experience prior to COVID and concluded that all four measures behave in a broadly similar manner. However, with the unemployed-to-job openings ratio and quits rate most consistent with recent rapid wage and price growth, these two measures should get meaningful weight in assessing future wage and price developments.

While the pace of job growth was relatively tepid in December (given the large shortfall that remains), other measures of the labor market showed meaningful improvement. The economy should be able to create jobs at a faster pace if other aspects of labor markets were following their usual patterns, including a higher exit rate of people from unemployment to employment and labor force participation rates rising as the unemployment rate fell.

More time should help with the recovery of millions of jobs, but it remains uncertain whether it will bring back all 4.4 million missing jobs or the 2.7 million missing workers or just a subset of them and how long this process will take. The two biggest wildcards are the desire of workers to find jobs and how it, along with labor demand, will interact with the rapid rise of the Omicron variant.

Fiscal policy will be expansionary over the coming year, albeit less expansionary than before, as an additional more than $500 billion from the American Rescue Plan is expected to spend out this fiscal year and Build Back Better would add more if it is passed. The stance of monetary policy likely will and should remain expansionary over the next year as well, although it may be less expansionary than it has been recently. Together with time, this should continue to return the economy closer to where it was prior to the pandemic. A big question is whether it can end up in an even better place, with higher productivity and tighter labor markets supporting greater real wage gains than before the pandemic. Time will tell.

US labor market made rapid progress in 2021, but employment rates remain depressed