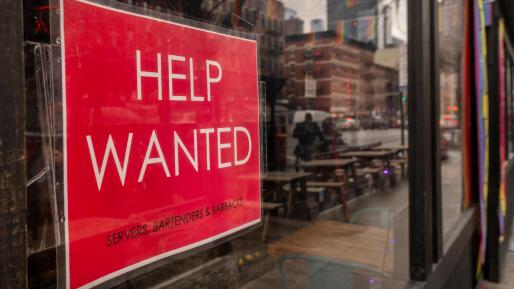 The US labor market could be cooling down

The economy added 428,000 jobs in April, a slight slowdown from the pace in recent months. The unemployment rate stayed at 3.6 percent as the labor force participation rate fell and broader measures of unemployment rose. The big news in the Labor Department's jobs report was that average hourly earnings were up only 0.3 percent, bringing the annualized increase over the last three months to 3.8 percent (adjusted for compositional changes). This is considerably slower than the pace of nominal wage growth in 2021 and, if it holds up, would indicate that labor markets may be considerably cooler than previously appreciated—reducing the underlying pressure on inflation.

A year ago, in our analysis of the monthly employment numbers, we asked if "The US labor market is running hot…or not?" We found many indications that the labor market was already tight then. In the year since, the labor market has gotten hotter and tighter. In March, job openings and quits both rose, reaching record high levels. There is a lot of reason to believe the labor market will continue to tighten: A broad range of measures showing nominal wages were rising rapidly through March, there are delays in the passthrough from prices to wages, and the broad indicators show that labor markets are extremely tight. Nevertheless, the latest data raises the possibility that nominal wage growth in 2021 was boosted by one-time, post-pandemic factors and that underlying anchored expectations for longer-run inflation are keeping nominal pay increases in check in 2022. More data will be needed, however, before being at all confident this is the case.

Tight labor markets have benefits in increasing employment for workers who would have a hard time getting employment in a more normal labor market. The downside, however, is that currently prices are growing faster than wages leading to the most rapid declines in inflation-adjusted wages in 40 years. More importantly, very low rates of unemployment may be unsustainable without high and rising inflation rates, and soft landings can be difficult, putting many more jobs in jeopardy in the future. 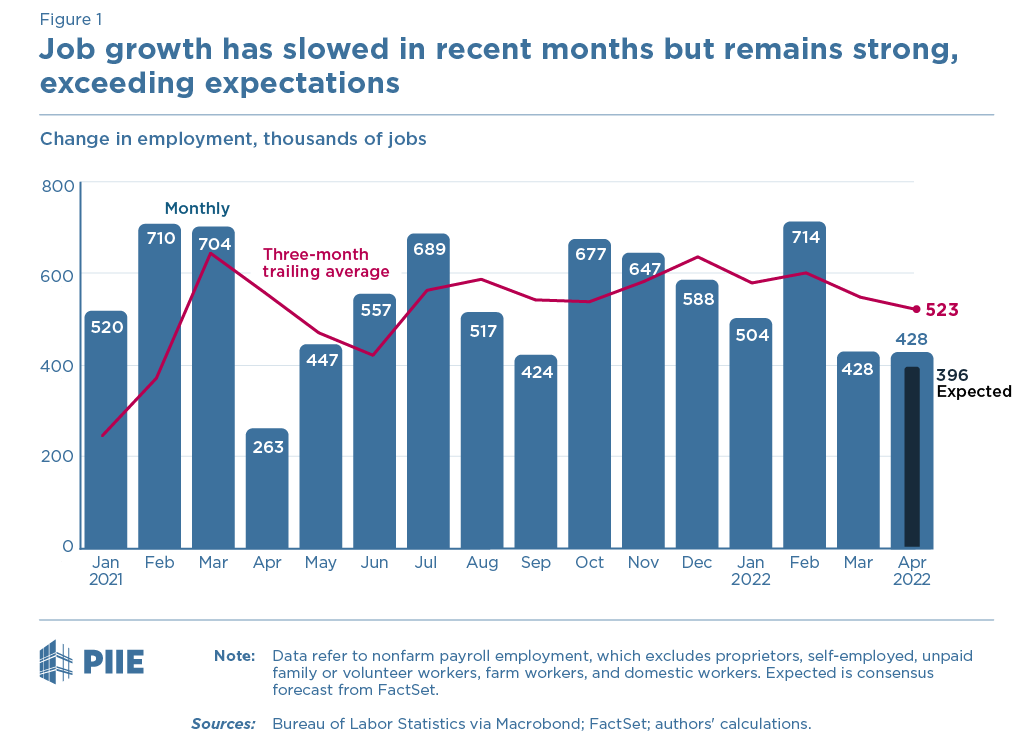 The unemployment rate remained at 3.6 percent in April, 0.1 percentage point higher than it was prior to the pandemic (figure 2a). However, broader measures of labor market underutilization edged up in April, as the number of workers marginally attached to the labor force (those who had wanted to and were able to work sometime in the last 12 months but who were not working or actively looking for work) increased.

Labor force participation fell in April and remains somewhat subdued. As a result, even though the unemployment rate is nearly recovered, the employment rate for workers aged 25-54 remains 0.6 percentage point below its February 2020 level (figure 2b) after falling slightly last month. 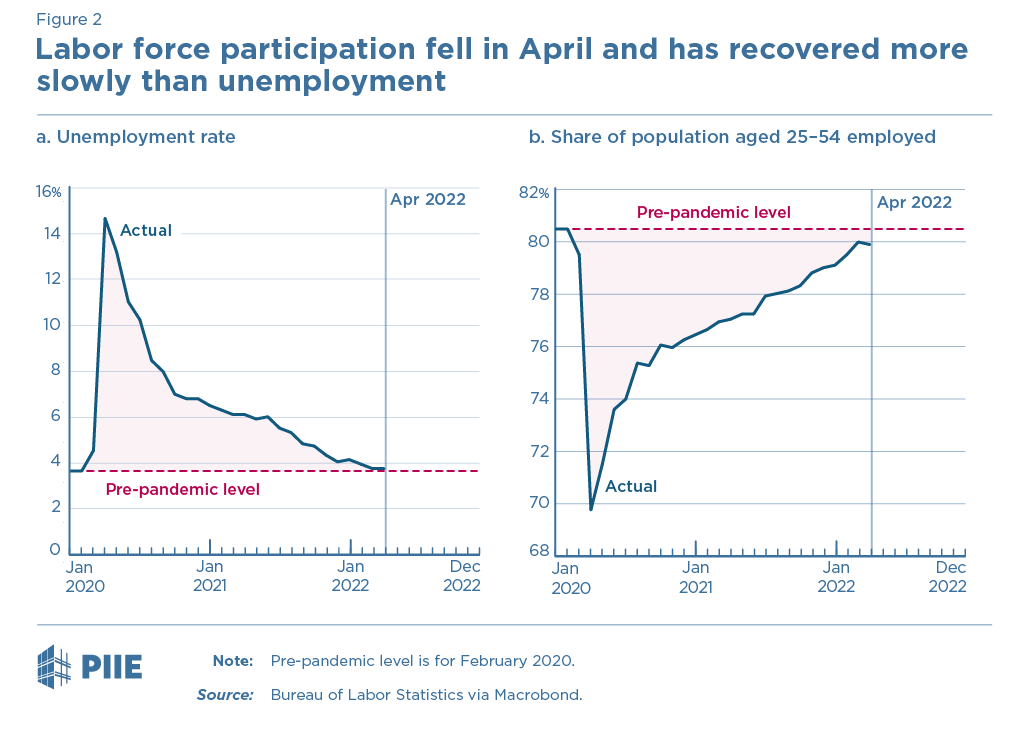 The economy is still 2.6 million jobs short and 1.0 million workers short of pre-pandemic projections, but that shortfall appears to be entirely due to reductions in labor supply as labor demand appears to remain at record levels.

Tight labor markets have contributed to a pickup in nominal wages, but that could be slowing down now

Indicators of labor market slack show that labor markets were getting steadily tighter through March, but the indicators that are available for April show that slack stayed the same (the unemployment rate and ratio of unemployed per job opening) or even increased a little (the prime-age employment rate and openings rate). Different indicators still tell a very different story about the degree of slack. The prime-age (25-54) employment rate shows slack in April modestly below its average from 2001 to 2018 (a period when the economy was, on average, below full employment). The unemployment rate was somewhat further below its average over that period, as was the ratio of unemployed to job openings, indicating meaningful labor market tightness. The quits rate (for March, the most recent month available) indicated an extremely tight labor market, and job openings indicate an even tighter labor market (figure 3). 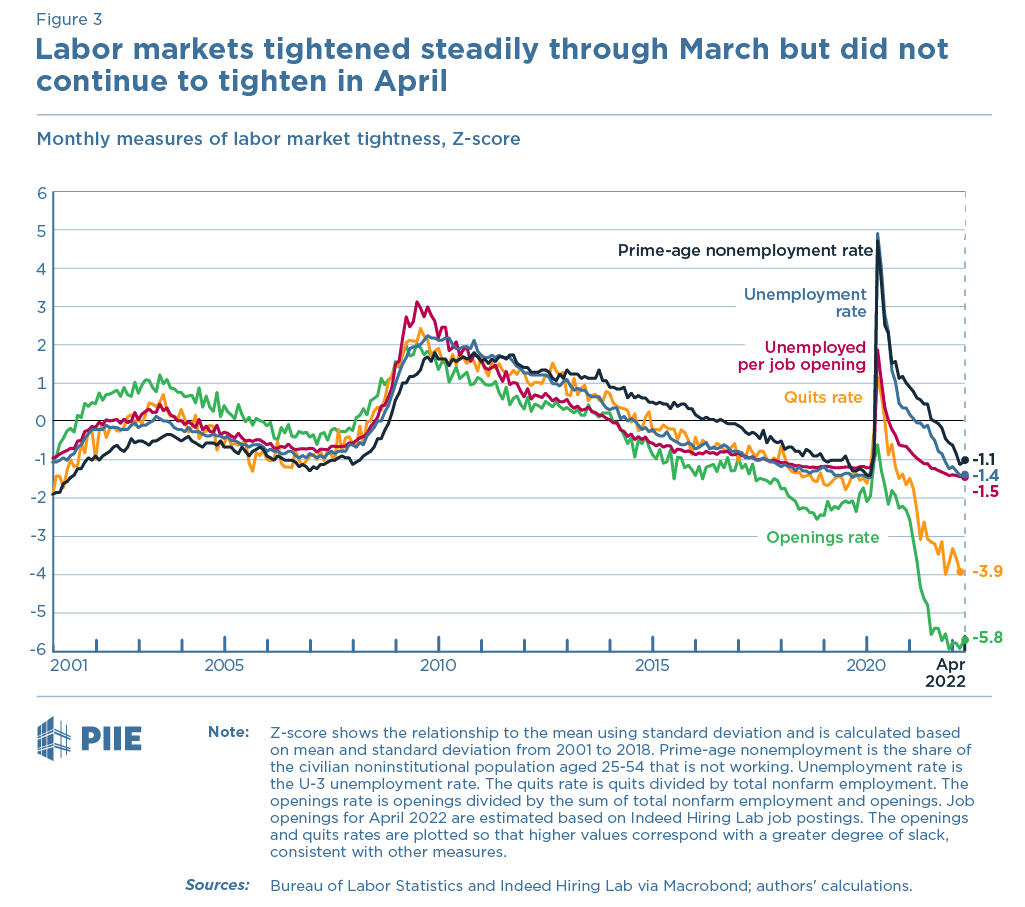 A wide set of measures of wages available through March all generally show that nominal wage growth measured over the prior year has been picking up pace. Overall, wages have been growing at about a 5.5 percent annual rate (figure 4). 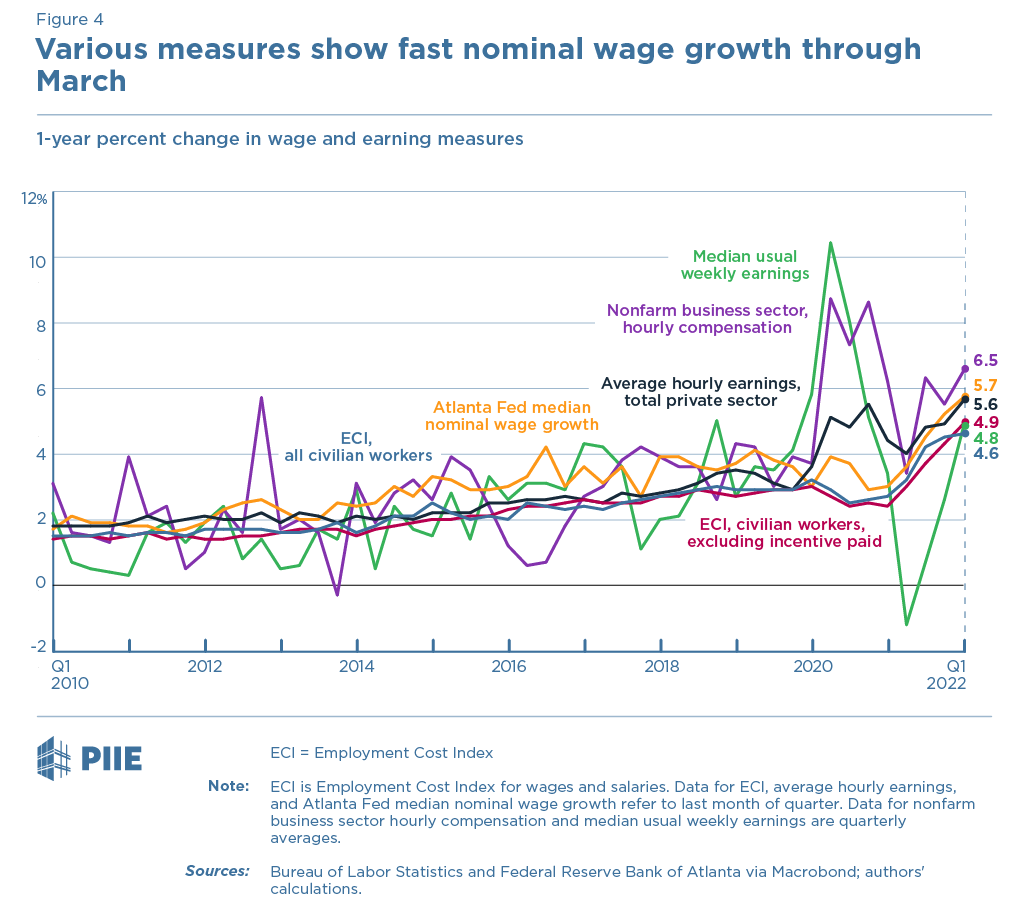 Today's data, however, is both more recent (covering April) and more granular (it is monthly). It suggests that wage growth may be slowing. The official average hourly earnings series for private-sector workers grew at a 3.7 percent annual rate over the last three months, a slowdown from recent months and the slowest pace in a year. The official average hourly earnings series is affected by the composition of the workforce, sometimes dramatically. In months when more lower-wage workers are hired back (for example, in leisure and hospitality), that can artificially lower the reported growth of average hourly earnings. Figure 5 shows a chain-weighted alternative which accounts for the change in the industry-level composition from month-to-month and thus eliminates part, but not all, of the composition bias (the scope for additional adjustment is limited with the data currently available). These numbers are generally similar to the Employment Cost Index, which adjusts for composition but is only available through March. 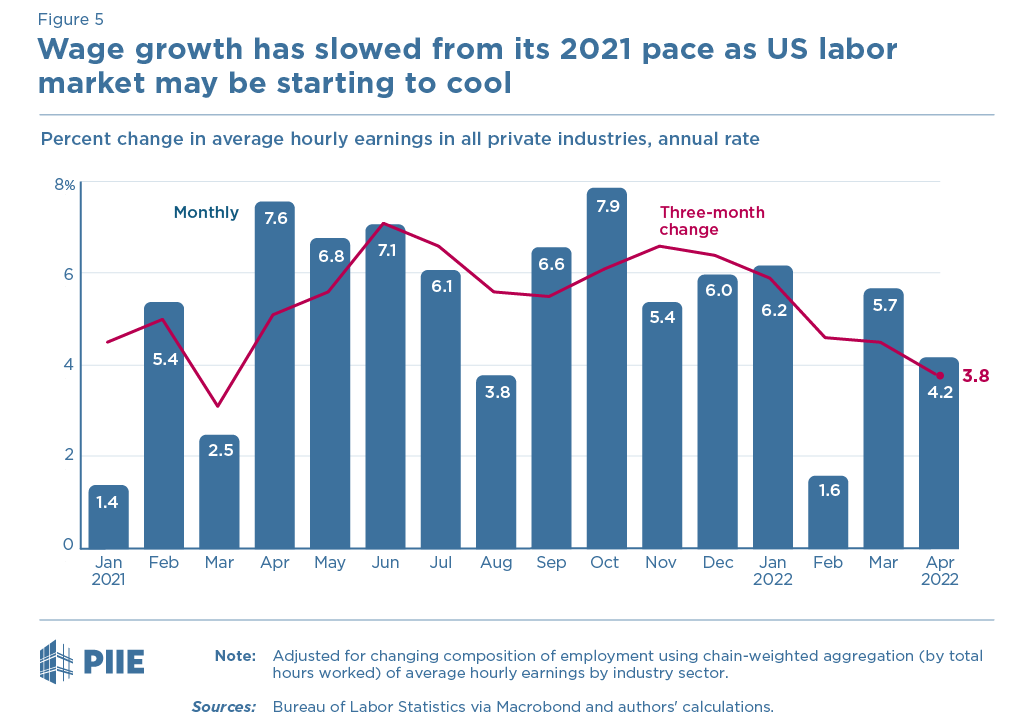 If wages grow at a 5 percent annual rate (below the pace of the last year but above the pace of the last three months), that would be consistent with underlying inflation of about 3.5 percent—assuming productivity growth is 1.5 percent and the labor share does not change. This is well below the recent pace of inflation, which has been elevated by temporary supply-side disruptions associated with the Russian invasion of Ukraine. But it is still above the Federal Reserve's target.

The 8.5 percent increase in the consumer price index in the 12 months through March is much faster than the pace of nominal wage growth, leading to the fastest declines in real wages over a year in at least 40 years. As of March, real average hourly earnings were essentially unchanged from their level in February 2020, even without adjusting for compositional changes that have artificially boosted the real wage numbers. (The expectation for April inflation is that it will be close to the 0.3 percent growth in nominal average hourly earnings.)

A wide-range of wage numbers show that real wages have been falling over the last year and in 2022-Q1 were generally near or below their values from before the pandemic:

Strong employment, weak real wages, and the future of the labor market

The labor market has been remarkably strong from the perspective of employment. It has been remarkably weak from the perspective of real wages. The big questions going forward are how sustainable this is and whether nominal wage growth is, indeed, slowing down. There is substantial room for labor force participation to improve and boost employment without adding to inflationary pressures. However, because additional labor supply also creates more demand, such an increase in employment would be unlikely to subtract from inflation either. If nominal wage and price growth do not slow dramatically, the question is whether continued reductions in unemployment will be sustainable and whether a modest increase in the unemployment rate is possible without tipping the economy into a full-fledged recession. For now, the Federal Reserve is just moving policy to a normal setting, but what happens beyond that will depend critically on whether the labor market starts to cool down on its own.