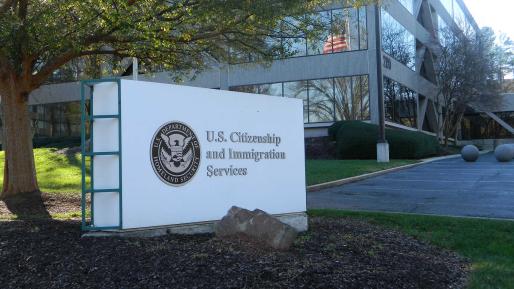 The Trump administration’s preference for a “merit-based” immigration system over one that welcomes migrants fleeing poverty and persecution became clear in May 2019. It was then that the administration unveiled an immigration reform proposal favoring English-speaking professionals with skills to fill jobs in such fields as medicine and computer programming.

An outcry erupted after these preferences were disclosed, many critics citing the famous poem at the base of the Statue of Liberty declaring: “Give me your tired, your poor, your huddled masses, yearning to breathe free.” But the most recent US data available suggest that the policy has already been implemented for H-1B visas, a category that allows US employers to hire foreign nationals in certain job categories when it can be demonstrated that their skills cannot be found among US citizens. In an even more striking trend, the dominance of this important visa category by nationals from India has become pronounced.

Tracking this trend is complicated by an administration cutback in the available data. The annual Characteristics of H-1B Specialty Occupation Workers, which is prepared by the US Citizenship and Immigration Services (USCIS) of the US Department of Homeland Security, has not been published for the fiscal year of 2018. Instead a much less detailed USCIS Statistical Annual Report was published in early 2019, which indicates that the number of H-1B petitions processed in FY2018 fell by 2 percent from FY2017. Data on H-1B visa issuance from the US State Department support the trend. The USCIS data suggest a tightening of H-1B administrative processing procedures by the Trump administration, as the rejection rate of H-1B petitions rose to 15 percent in FY2018 from around 6 percent in 2014–17. Due to this tightening, the total number of H-1B petitions approved in FY2018 declined to 335,000, which is roughly 10 percent lower than the number of H-1B petitions approved in 2016–17 but more than the number approved in 2014–15.[1] So even if sustained, this higher level of H-1B rejections would imply only a relatively limited tightening of H-1B administrative processing procedures during the Trump administration in FY2018.

The presence and potential political clout of an Indian diaspora of skilled professionals and businesspeople in the United States were on display in September 2019, when thousands attended a rally for Prime Minister Narendra Modi and President Trump in Houston, just as the Indian “dominance” of the of the H-1B—the main US temporary high-skilled visa—has peaked (figures 1 and 2). 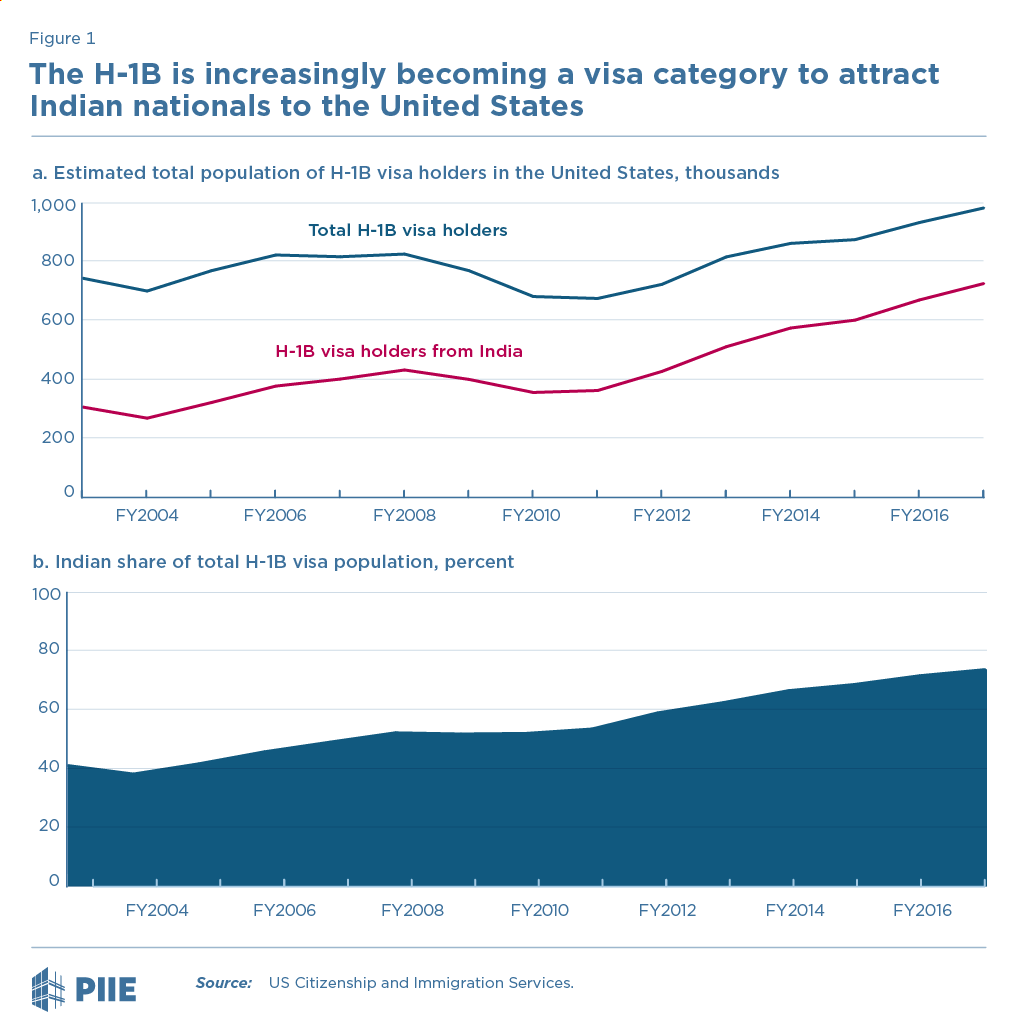 Of note is that the total estimated number of H-1B visa holders in the United States in FY2017 reached almost one million, and the share of Indian nationals in this category reached a remarkable 74 percent or more than 727,000 high-skilled workers. The H-1B is increasingly becoming a visa category to attract a single nationality—Indians—to the United States.[3] The trend predates Trump and has continued under his presidency.

Figure 2 shows the annual number of new H-1B and H-4 visas (for spouses and children of H-1B recipients) issued by the US Department of State to Indian nationals outside the United States and the share of Indians in the total number of H-1B and H-4 visas issued in those categories. A roughly similar trend is visible in both figures 1 and 2. 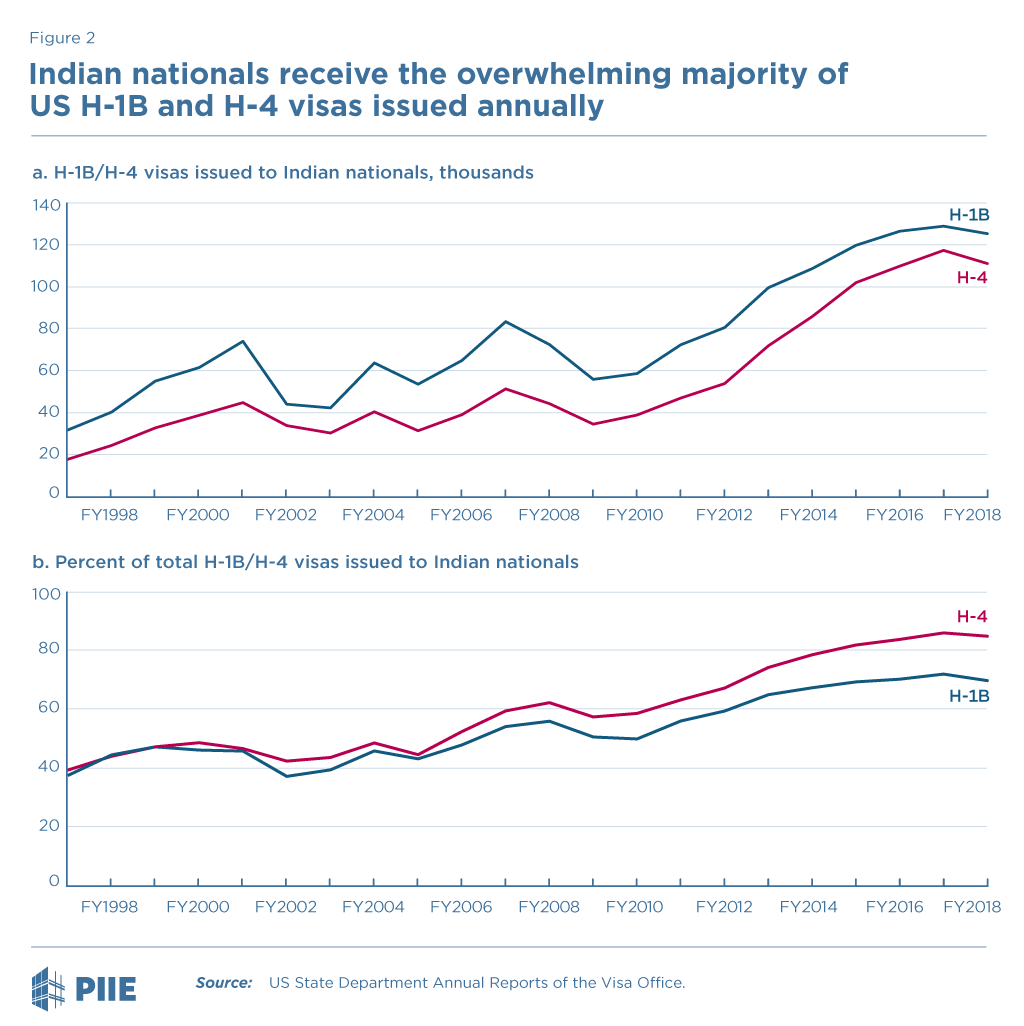 Unlike the USCIS, the Department of State has published data for FY2018. The number of H-1B visas issued to Indian nationals has risen dramatically since 2012. Their share in the total number of H-1B visas issued annually increased from over 50 to over 70 percent in FY2017 but declined slightly in FY2018, perhaps due to tougher implementation guidelines of the Trump administration.

The issue of visas for Indian nationals working in the United States remains fraught, however. A major concern is the H-4 visa category. In 2015, the Obama administration gave H-1B spouses the right to work in the United States for up to three years. The Trump administration plans to rescind that provision, drawing condemnation in Indian media. Figure 2 shows that the Indian dominance in the H-4 visa category is even higher than in the H-1B category. Fully 85 percent of new H-4 visa holders in FY2018—over 110,000—were from India and were overwhelmingly women.

It remains to be seen whether Prime Minister Modi can get this policy reversed, but the fact that the Trump administration has not yet implemented it, despite discussing it for several years, at least implies that possibility. India and the United States remain at odds over trade issues, but the open door for skilled Indian workers in the United States is a bright spot in the relationship.

1. The precise relationship between the data from the 2018 USCIS Statistical Annual Report and earlier data from past annual reports of H-1B petitions is not clear, as data in the former for FY2014–17 do not precisely match earlier released aggregate data from the Characteristics of H-1B Specialty Occupation Workers reports. The data levels in the two reports, however, roughly correspond, suggesting that available aggregate levels for FY2018 from USCIS should be taken as the approximate level and trend in the data.

2. Figure 1 assumes that all H-1B visa recipients stay in the United States for the full duration of the three-year valid period of the H-1B visa.

3. The second most important nationality in the H-1B program is China, whose nationals account for about 10 percent of the total estimated H-1B population.