The Unsustainable Trajectory of US International Debt

On March 29 the Bureau of Economic Analysis (BEA) released its estimate of the US net international investment position (NIIP) as of year-end 2016. Foreign financial claims on US residents and institutions exceeded US claims on foreign residents and institutions by $8.4 trillion, implying a negative NIIP of ‑45 percent of GDP (figure 1).[1] Never in history has one country owed so much to the rest of the world.

The NIIP is projected to decline further to ‑53 percent of GDP by 2021.[2] The United States is approaching a range in which other countries have encountered difficulties. This post explains why the declining NIIP is a problem. A companion post discusses policies to solve the problem. 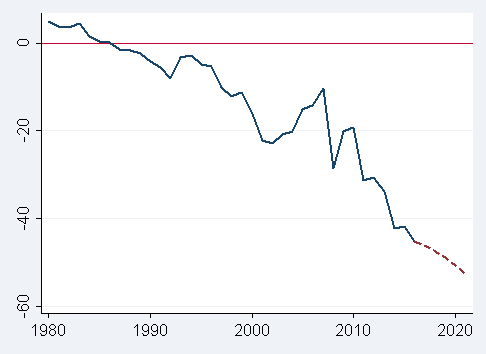 In 2000, two leading professors of international finance—who are also the current and former chief economists of the International Monetary Fund (IMF)—Maurice Obstfeld of Berkeley and Kenneth Rogoff of Harvard, wrote that the US trade deficit (figure 2) was not sustainable (Obstfeld and Rogoff 2000).[3] Each year the NIIP declines (becomes more negative) by an amount equal to the trade deficit, and the NIIP is growing faster than US GDP. They estimated that returning trade to balance would require a real depreciation of the dollar of around 13 percent. Five years later, in light of the widening of the trade deficit to a record 6 percent of GDP, they calculated that eliminating the trade deficit would require a real depreciation of around 33 percent (Obstfeld and Rogoff 2005). Independently, William Cline (2005) estimated that cutting the deficit in half would require a real depreciation of 17 percent. In a later paper, Obstfeld and Rogoff (2007, 365) stated, “if greater financial integration allows bigger and more protracted deficits, however, the ultimate relative price adjustments will have to be more extreme.” 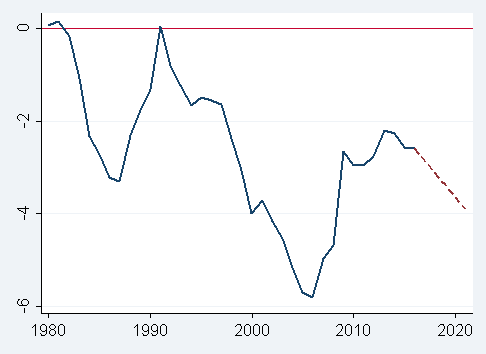 No country of even a modest size (GDP of at least US$50 billion) had a NIIP below roughly ‑60 percent of GDP in 2014 without experiencing a major reversal in its current account deficit, often accompanied by severe financial stress. Because it borrows entirely in its own currency, the United States likely will avoid a worst-case scenario, but the US and foreign economies nevertheless face serious adjustment costs that only rise as adjustment is delayed.

Recent research shows that workers who lose their jobs to rising imports face far greater difficulties in gaining reemployment than economists had believed (Autor, Dorn, and Hanson 2016). These costs have already become a powerful political issue that threatens to roll back globalization. To the extent that shifts in trade are permanent, there is a strong case that the gains exceed the losses, at least in terms of aggregate income. But when imports increase beyond a sustainable level, the adjustment costs—including job losses—are a complete waste, especially as there will have to be adjustment costs—with further job losses—as economic activity shifts back into tradable industries at some future date.

Despite its negative NIIP, the United States reports higher earnings on its foreign assets than it pays on its foreign liabilities. This happy outcome does not imply that the US net debt is costless, as the excess of income over payments would be even larger if the NIIP were positive. Moreover, the excess of income is more apparent than real, as reported income and payments likely are distorted by the incentive to artificially book profits in low-tax jurisdictions, which depresses reported profits of foreign corporations in the United States and increases reported profits of US corporations overseas. In addition, a disproportionate share of foreign investment in the United States is held in Treasury securities and other ultra-safe debt instruments with record low interest rates. As US interest rates rise, payments to foreign investors also will rise.

[1] The BEA headline number includes US holdings of gold (about 1.5 percent of GDP), which are not a claim on foreigners. For comparability across countries, this post uses the definition of NIIP adopted by the External Wealth of Nations database of Philip Lane and Gian-Maria Milesi-Ferretti.

[2] Each year the projected NIIP is calculated as the sum of the previous year’s NIIP and the projected current account balance, taken from Cline (2016). Projected GDP is taken from the October 2016 IMF forecast. The projection ignores potential valuation adjustments, which averaged 0.8 percent of GDP over 1995-2014 and are highly volatile. Major causes of valuation adjustments are changes in equity market prices and exchange rates. Dollar depreciation tends to increase the value of US assets and has little effect on the value of US liabilities.

[3] There are several measures of the trade balance. This post focuses on the current account balance, which is the broadest measure of income received from, and payments made to, the rest of the world.

Worry About the Trade Deficit—a Bit