It has been almost two years since the great "taper tantrum." In June 2013, financial markets interpreted statements by the chairman of the Federal Reserve Ben Bernanke as suggesting that a tighter monetary policy was in the offing when that was apparently not his intention. Thinking the "taper" of the Fed's bond purchasing program, known as "quantitative easing" was imminent, markets reacted with an immediate spike in US bond yields and the value of the dollar and prolonged stress in some emerging markets. Among the worst-hit "Fragile Five" (Brazil, India, Indonesia, Turkey, and South Africa), the buoying effect of foreign capital inflows into their countries was temporarily reversed, and their currencies sharply depreciated.

Is another tantrum on the horizon? With a probable Fed rate hike looming this summer or fall, markets are asking again whether the Fragile Five can weather a new round of US monetary tightening. Because falling oil prices may cushion the effects of such tightening, and as the central bank is predictably telegraphing its intentions, an exact repeat of the events of summer 2013 is not likely. That being said, with the possible exception of India, countries in the Fragile Five are not fundamentally different in terms of macroeconomic or policymaking stability than they were two years ago. They will face familiar challenges in staving off capital outflows, sovereign bond spikes, unsustainable current account deficits, and other crises that may occur in unpredictable ways.

The current account provides an important, albeit broad, view of the external financing positions of Brazil, India, Indonesia, South Africa, and Turkey. As figure 1 illustrates, most members of this group had moved into negative territory well before the global financial crisis and continued to slide on strengthening currencies and increased import demand until around 2012. This decline produced a growing reliance on financing from abroad, which has not substantially improved as of 2014. 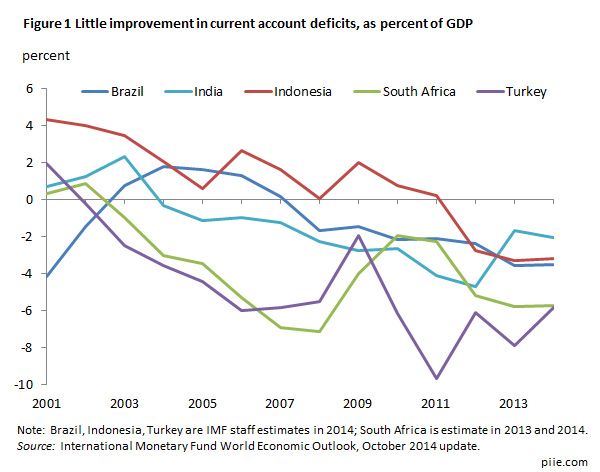 The balance on trade and services, a significant component of the current account, could provide some temporary relief to the Fragile Five thanks to the plunge in the price of oil. Turkey, India, and South Africa, which are net importers of petroleum, benefit from mid-2014's decline in global oil prices as it lowers the cost of imports. Indonesia and Brazil are also net oil importers, but their situation is complicated by also being large commodities exporters. Falling prices for oil, coal, and other minerals will, in the case of Indonesia, cut into export revenues and stymie improvement in the trade balance. Brazil has not only lost revenues on its commodities exports, but cheaper oil also discourages foreign investment in potentially lucrative offshore drilling projects.

Future oil price developments will have either neutral or net-positive effects on the Fragile Five's short-to-medium term ability to finance themselves: Turkey's current account deficit more than halved in January and India's finance minister ("hopefully") placed the deficit at less than 1 percent of GDP in 2015–16. But it is unclear how long and to what extent countries will be able to rely on cheap energy imports. The oil shock could also lead to complacency. Turkey's finance minister, Mehmet Simsek, was quick to laud the benefits to his country's current account and enthusiastically lobbied for a return of investor interest on this development alone. But Turkey is not in the clear based on a windfall completely exogenous to Turkey's marketplace or policymaking fundamentals.

Data from the IMF show that Brazil and India still have very large amounts of official foreign exchange reserves: $350 and $300 billion respectively, with India increasing its holdings nearly 20 percent since 2013 (table 1). Indonesia has also substantially increased its holdings, while Turkey and South Africa have done the least in terms of shoring up reserves, which may make markets view their position less positively than the others. In terms of months of import coverage, Turkey and South Africa are hovering around just below the 6-month mark, which is a generally accepted norm for developing countries. Indonesia and India are closer to ten months. While Brazil is the only country to lose reserves over the period, its position by this metric is the strongest at 22 months.

The headline feature of the "taper tantrum" was sharp currency depreciation. The search for yield that drove some of the largest capital flows to developing countries in history fell after 2013, as reported by the Institute of International Finance.2 The fall in demand for national currencies and resulting depreciation can be seen most clearly in summer 2013 following Bernanke's June 19 speech. But these currencies have not had an easy time since (figure 2). Some appeared to stabilize in 2014, but the currencies of Brazil and Turkey have declined since the beginning of 2015. 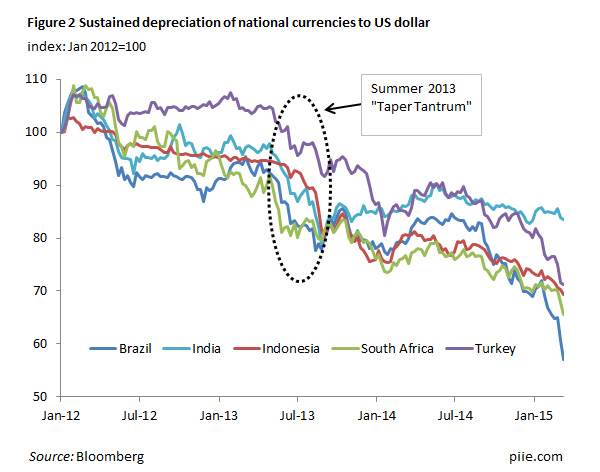 Exchange rate depreciation can cause problems for countries that are recipients of large amounts of foreign investment. First, external dollar denominated debt becomes more expensive relative to national currency income, making it more difficult for businesses and governments to repay investors. Second, investors whose assets are in local currency either take losses or pull out, reinforcing the depreciation and capital flight and hurting the investment and business environment. Third, depreciation generally leads to inflation because imported goods become more expensive, and many of these countries struggle with high inflation rates. In some instances, such as that of oil, however, cyclical price declines have likely outstripped the exchange rate effects.

Of the five countries mentioned above, India is the only one with a currency stronger now than at the time of the "taper tantrum." Indonesia and South Africa have been gradually depreciating over the past year. Brazil and Turkey look worst off, with sharp declines, down 17 percent and 11 percent respectively since the start of 2015. The question remains how much of this decline has been market "preparation" for the US tightening and how much is a result of domestic circumstances, such as Turkey's interest rate cuts or the Petrobras corruption scandal in Brazil.

How the Fragile Five fare when Fed policy tightens is also contingent on the quality of policymaking and the perceived stability of each country's leadership. This area is a mixed bag but with a few positive signals. In early March, India's Reserve Bank (RBI) was widely praised after cutting rates in response to easing inflation days after formalizing a historic agreement with the finance ministry to move towards a formal inflation-targeting system. Indonesia's recently elected president, Joko Widodo, has used oil's fall to scale back costly fuel subsidies and has embarked on massive infrastructure spending projects. In contrast, Turkey's president Recep Tayyip Erdogan startled markets and sent the lira sliding after reigniting the long-simmering battle with the central bank governor, Erdem Basci, over the pace of monetary easing. The governments of both Brazil and South Africa are facing major crises of confidence over corruption scandals and major power shortages.

By all of the above indicators, the Fragile Five do not appear significantly stronger than they were heading into summer 2013. Any improvement in their current situation comes instead from exogenous factors outside fundamentals: depressed oil prices, easing actions by the Bank of Japan and the European Central Bank, which are moving decisively in the opposite direction of the Fed, and the hope that markets will be better prepared this time around.

The real danger lies in the fact that we are entering very uncertain macroeconomic waters, which could bring about unanticipated movements in currencies and capital flows. As the IMF managing director, Christine Lagarde, has warned: "For the first time since 2006, the United States will raise short-term interest rates later this year, as the first country to start the process of normalizing its monetary policy. Even if this process is well managed, the likely volatility in financial markets could give rise to potential stability risks." Any tantrum will most likely not manifest itself all at once like it did the last time, but that doesn't mean that the Fragile Five won't have something to worry about.

Are Countries Better Off with Their Own Monetary Regimes?