Taking Stock of the United Kingdom's Funding for Lending Scheme

During the tense summer of 2012 while the European sovereign crisis was in full bloom, the Bank of England (BOE) announced plans to launch an innovative new program to ameliorate the persistently high and rising costs of financing—especially to the United Kingdom's 5 million small- and medium-sized enterprises (SMEs). This program, which was dubbed the Funding for Lending Scheme (FLS), aimed to prevent credit rationing by banks by providing subsidized credit for net new lending to the real economy. The program took effect in August of that same year and was modified less than a year later to more directly target SMEs. In this post, we take a look at how the program has fared.

On July 18, 2014, the Bank of England released its quarterly Trends in Lending report, which shows that retrenchment of the British financial system continues, albeit at a slower pace. Net lending to UK businesses has risen from a trough of –9.2 percent year-over-year in March 2010 to just –1.6 percent in May 2014 (figure 1). This reflects the rising costs of credit from the euro area crisis and continued deleveraging of the banking sector. The FLS was designed to override the banks' concerns about expanding their balance sheets in an uncertain economy by making the funding to do so cheap enough. Nearly a year after the FLS was created, it had become clear that the banks were lending to the largest firms and the real estate market. Thus, the BOE altered and extended the program allowing for up to 10 times the marginal pound of lending to SMEs to be eligible for the subsidized funds. Since then, funding costs have continued to trend down and lending to SMEs has slowly begun to recover (figure 2).

It is difficult, however, to lay the full credit for the easing in credit conditions at the feet of the FLS. The BOE announced FLS just two weeks before ECB President Mario Draghi's now-famous "whatever it takes" speech on July 26, 2012, which had a dramatic effect on rates across Europe and beyond. Furthermore, the BOE had also recently announced the expansion of its own asset purchase program by £50 billion. However, as shown in figure 3, the FLS has seen significant uptake since its initial stages, and the improvement funding costs specifically to SMEs is notable, if not exceptional. However, the anemic growth in loans to SMEs in late 2012 and parts of 2013 may have less to do with the availability of credit than the demand for credit. Indeed, according to the BOE's Q1 2013 Credit Conditions Survey , demand for credit by SMEs was actually falling. This contrasts sharply with more recent readings in Q1 and Q2 of this year, which show strong demand for credit. From the corporate side, a private survey of Chief Financial Officers by Deloitte showed that following the FLS announcement (and the Draghi speech) both the availability and cost of credit went in the desired directions (see chart 8 in Deloitte's survey). 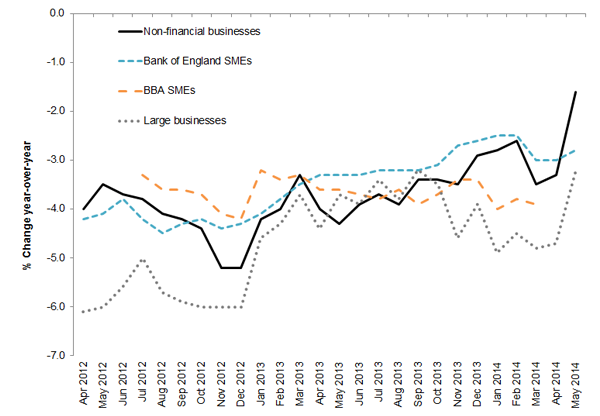 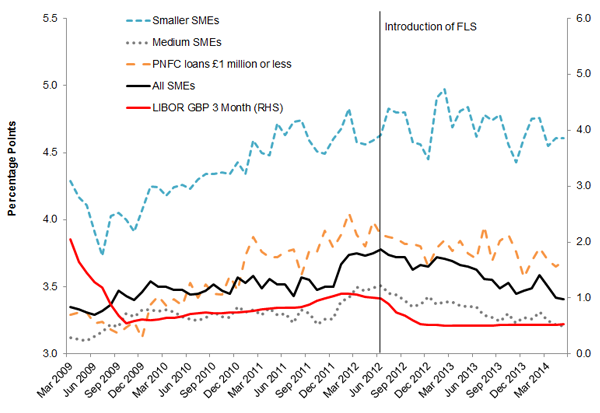 Sources: Bank of International Settlements, Bank of England, and Bloomberg. 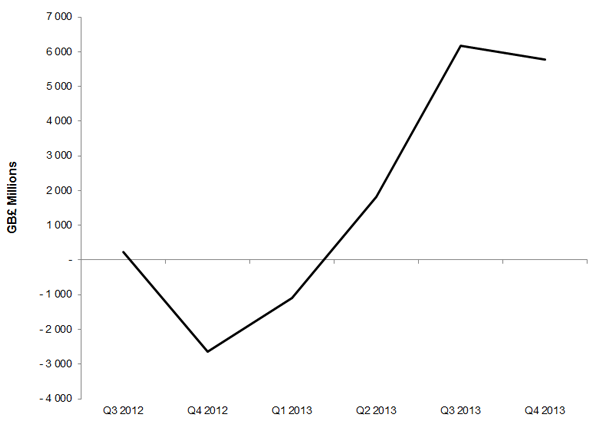 Note: These data are for the first part of the FLS, which ended on January 31, 2014.
Source: Bank of England.

Reviewing the preceding, it would seem that lending growth should have been stronger, which may have helped spur investment and thus productivity growth. But there are two potential problems: 1) Banks have been hesitant to expand their books at any cost, and 2) there simply hasn't been enough demand in the economy for credit outside the corporate and housing sectors. As to the former, this has been an issue for UK banks that are still deleveraging (some under government direction) and adjusting their balance sheets in accordance with or in anticipation of EU regulatory requirements. This is understandable, given the role that banks played in the United Kingdom during the rapid period of leveraging starting in 2000—even compared to other economies that suffered from the financial crisis (differences in composition of total credit distribution notwithstanding; see figure 4). 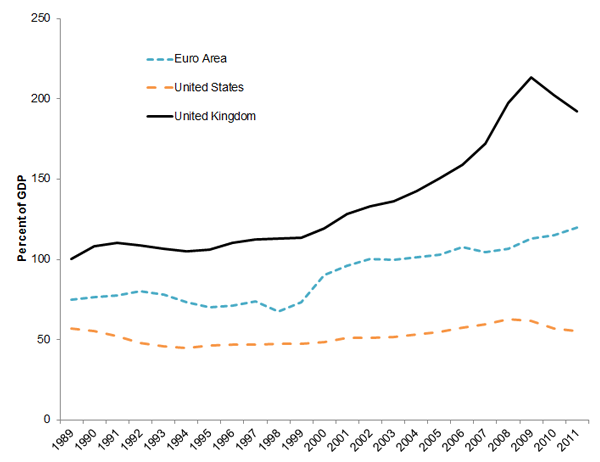 In this way, the recently much-maligned Help to Buy scheme has experienced serious uptake from the banks. The program allows the government to provide equity stake in the property as well as a partial mortgage guarantee, thus the marginal loan extended does not lower the banks' risk-weighted capital ratios. To be sure, there many reasons to be critical of Help to Buy, namely putting taxpayers on the hook for first-loss liabilities on participating banks' mortgage loans. But it is certainly enlightening to compare with the comparatively tepid uptake of FLS. That is, banks need to consider not just the price of their funding for marginal lending but also regulatory capital requirements and the relative risk of the loans to smaller businesses (and thus the risk weighting they receive).

As to the latter issue of aggregate demand for credit, that could still be in the offing. Until the past several quarters, the trajectory of the UK economy was still quite uncertain. With the new monetary regime in place at the BOE that remains committed to maintaining an accommodative policy for some time, inflation subdued, and consumption growth continuing to improve, expectations of a stronger economy should become more firmly anchored, investment and demand for credit should pick up—as discussed in the recent IMF Article IV .

The FLS was never intended to correct all of the ills that currently afflict the outlook for the UK economy, namely sluggish productivity growth (though if successful, it could certainly help). As the BOE's Q4 2012 Quarterly Bulletin clearly spells out, it was "a direct and targeted response to a specific headwind, namely the elevated level of funding costs facing UK banks…." When judged by this narrow metric and in conjunction with other efforts by the authorities, the FLS would appear to be a qualified success thus far. However, whether its broader goals of stimulating investment by SMEs are successful still remains to be seen.

Why I Changed My Vote