Strong US jobs report for May should not change Fed plans

The US employment report for May confirmed that the demand for workers cooled somewhat this spring but remains strong. Nonfarm payrolls rose 390,000, a bit more than the consensus forecast, and the revisions to earlier months were small. As can be seen in figure 1, the May data bring the 3-month average growth rate of employment down to 408,000—down about one-third since the winter. The unemployment rate was unchanged at 3.6 percent in May, remaining in the low range seen in the robust pre-pandemic labor market. Labor force participation ticked up 0.1 percentage point but is still well below the level of early 2020. The May employment report provided more evidence that wage growth is slowing, with the 12-month growth rate of average hourly earnings moving down to 5.2 percent. 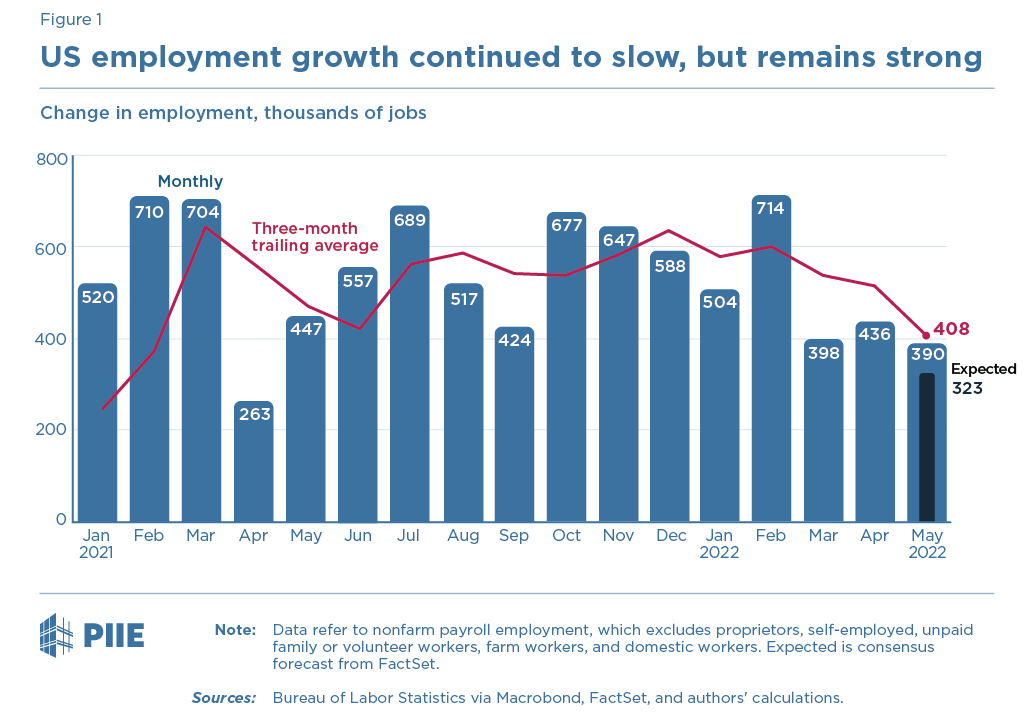 With labor demand remaining robust and with price inflation well above the Federal Reserve's target, this report should not change policymakers' view that significant further increases in the federal funds rate are needed. In this month's update, we take deeper dives into patterns of wage inflation and labor force participation.

Changes in average hourly earnings reflect both the underlying trend in wages and compositional effects related to shifts in the pool of workers. The twelve-month change in composition-adjusted average hourly earnings, a series that partially abstracts from the latter factor, declined from 5.6 percent in April to 5.3 percent in May (figure 2). The three-month annualized change in this series ticked up in May to 4.6 percent as February's very low wage growth dropped out of the average, but it is down sharply from a peak of just over 7 percent in mid-2021. This decline suggests that underlying wage growth has passed its peak, although the three-month change is still 1.7 percentage points above the average for the five years preceding the pandemic. 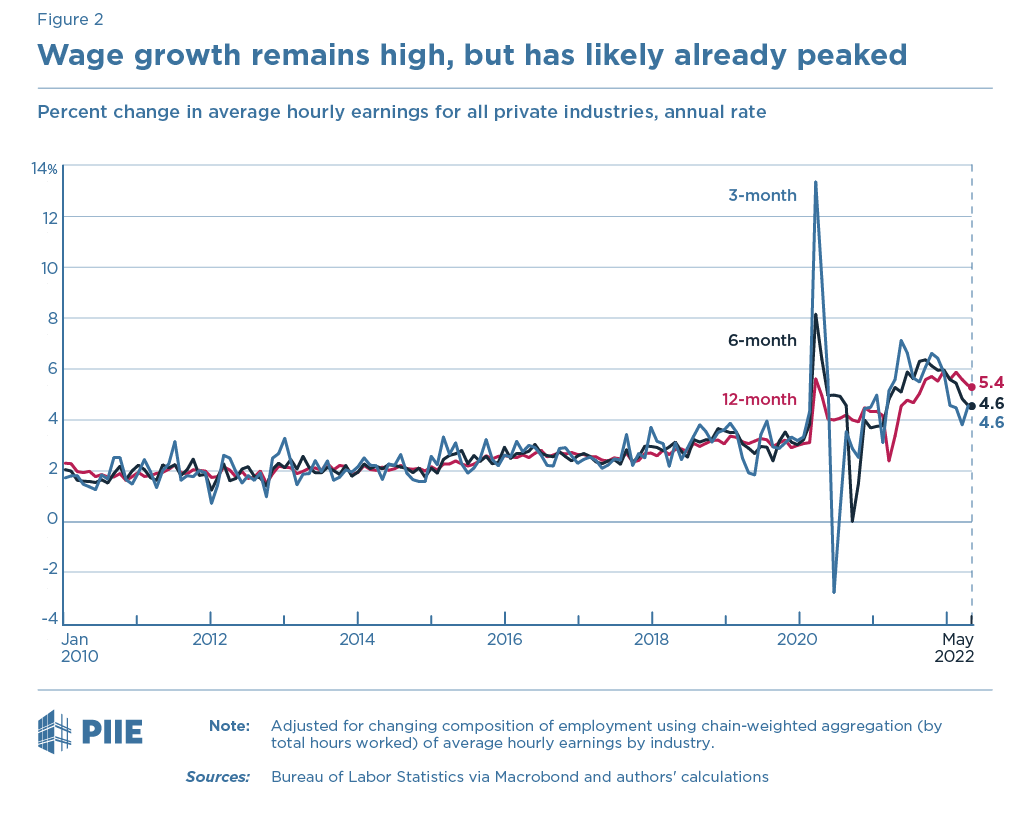 Lower labor cost growth should be a welcome development for firms, but the slowing means that workers will struggle more to keep up with inflation. With energy and food prices surging, the personal consumption expenditures (PCE) price index rose at an average annual rate of 6.9 percent in the three months ending in April (the last available data).

The deceleration in earnings has varied across sectors, as shown in figure 3. Wage growth in the leisure and hospitality industry has edged off its blistering earlier pace but remains very high, with a three-month change of about 9 percent. Wage growth has also decelerated in education and health services, in mining and logging, in wholesale and retail trade, and in other services. By contrast, wage growth has picked up notably in utilities. 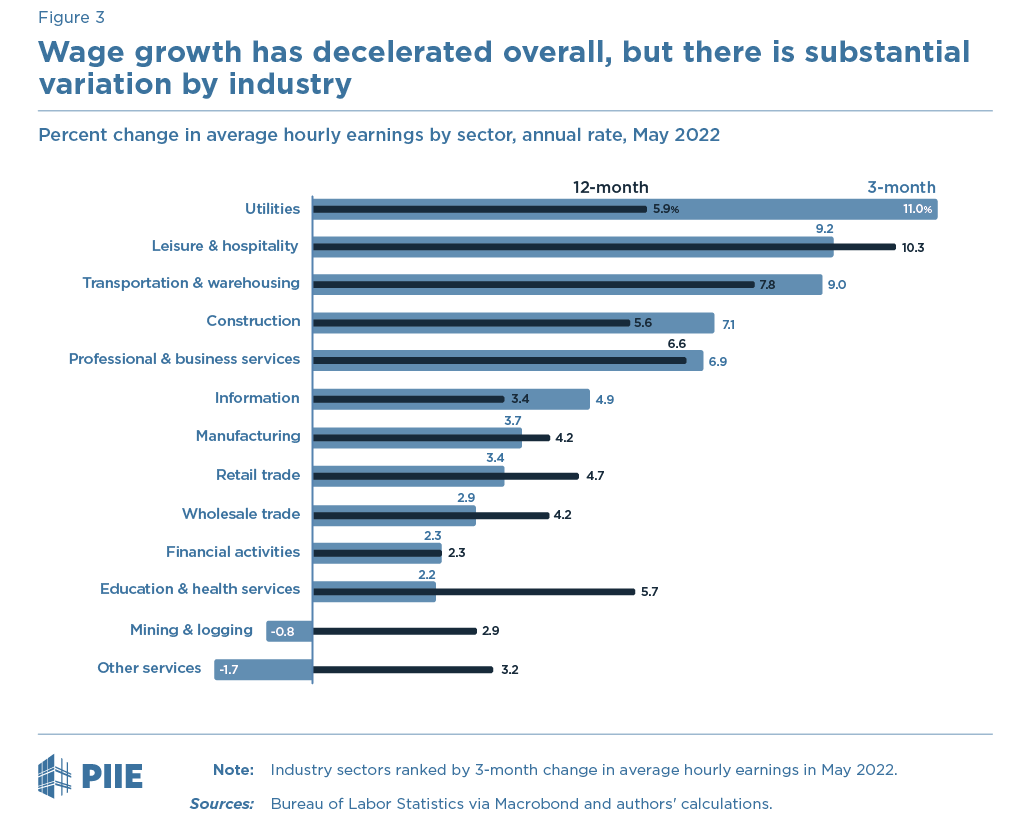 Labor Department data released earlier this week showed that job openings remained exceedingly high through April, and higher-frequency information from private sources suggests that openings have not diminished materially since then. As seen in figure 4, there were an estimated 1.9 job openings per unemployed worker in May, about 60 percent higher than the levels seen in the robust pre-pandemic labor market. These data suggest that labor demand remains strong. 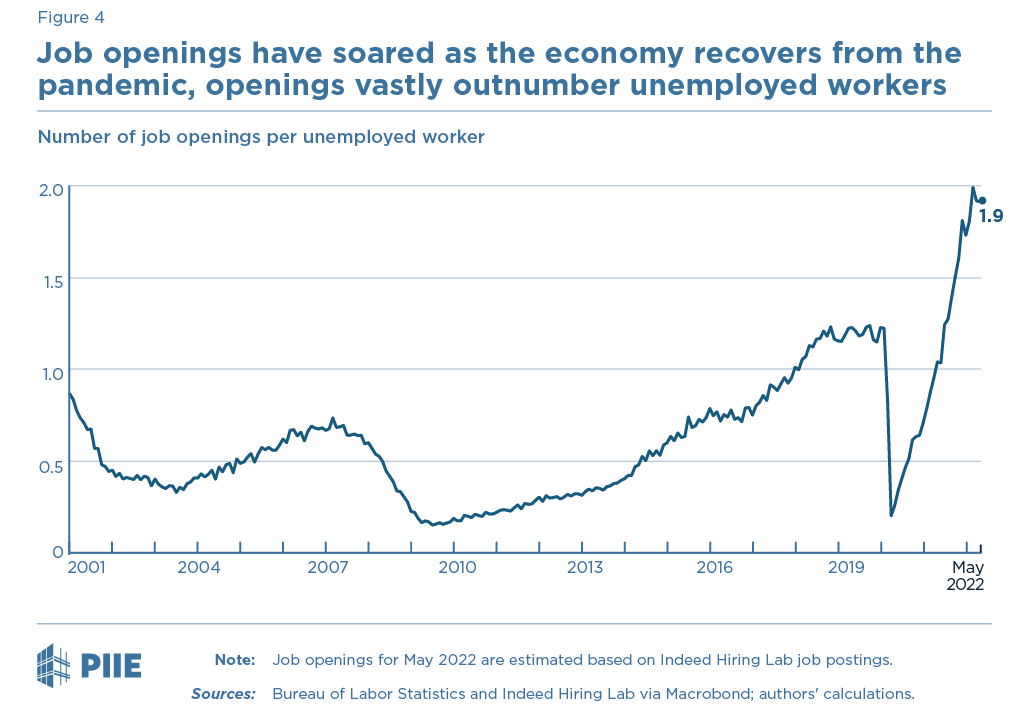 Recently, however, firms seem to be less willing to raise wages sharply in order to fill openings than they were last winter. As seen in the left panel of figure 5, sectors with high levels of job openings in late 2021 were increasing wages significantly, while sectors with lower levels of job openings were offering more modest increases. However, the right panel of figure 5 shows less of a relationship between job openings and wage growth this spring. A natural interpretation is that firms would like to hire workers but are less desperate to do so, perhaps because of concern that demand for their goods and services may slacken as the Federal Reserve removes monetary accommodation. 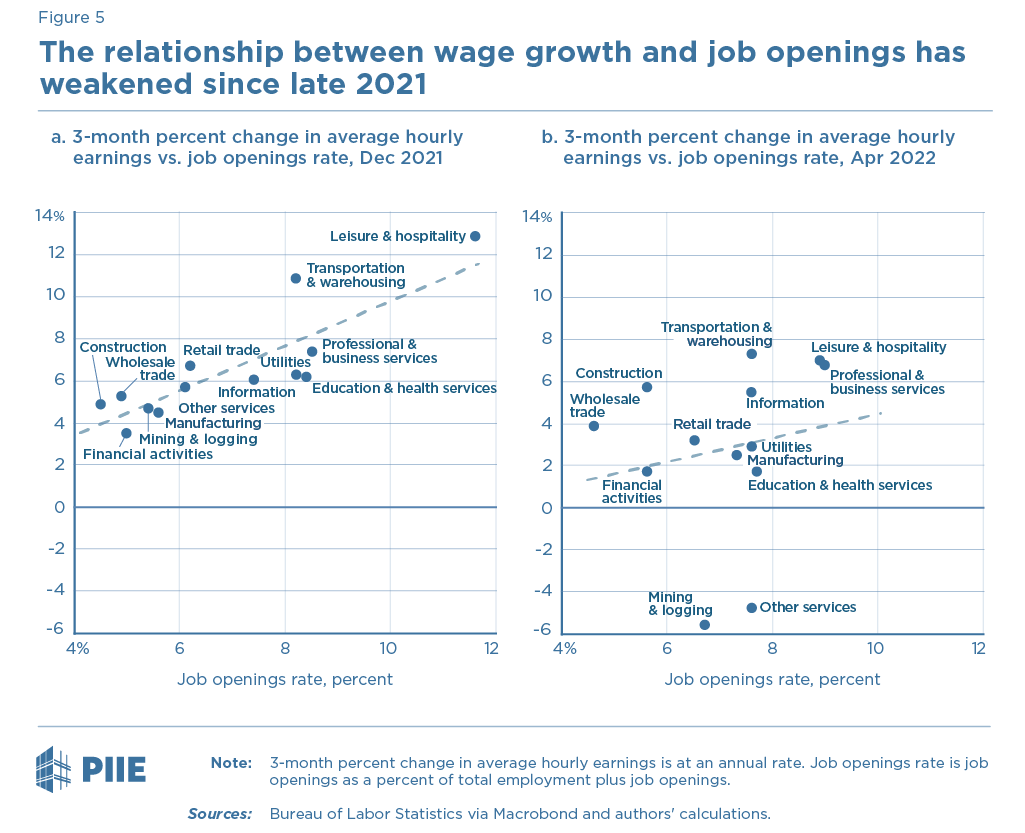 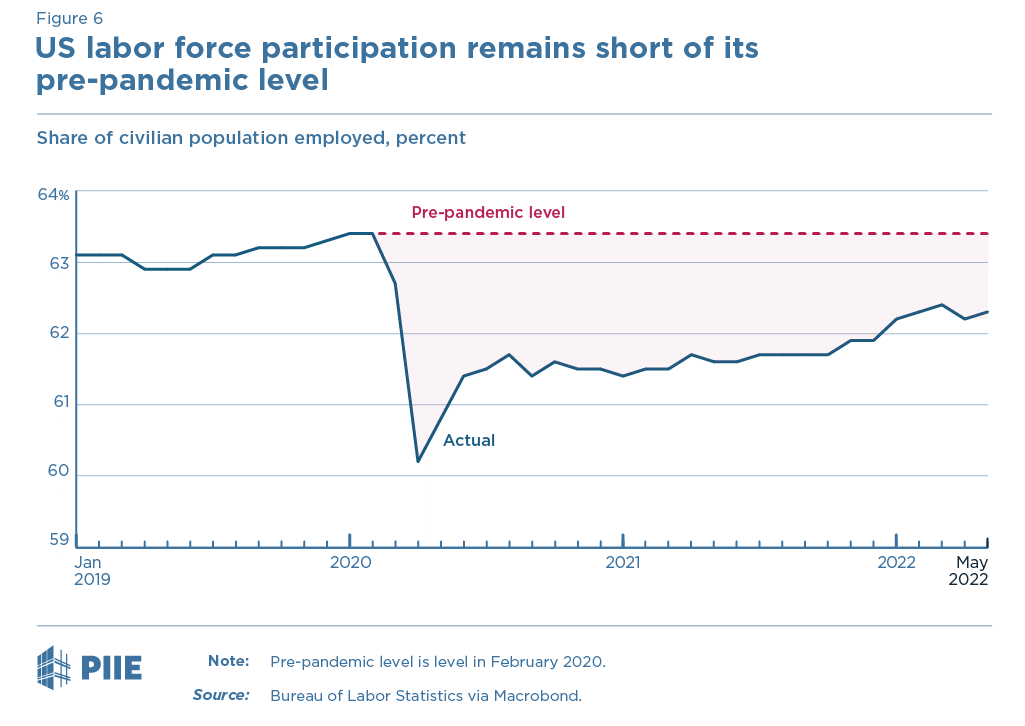 Whether labor force participation will rebound much further is not clear

In 2020 and 2021, a significant number of people reported staying out of the labor force because of factors related directly to the pandemic. However, those reasons for not working are much less important today. As can be seen in figure 7, answers to a special pandemic question in the Current Population Survey show that the share of people reporting that they were not looking for work because of the pandemic declined sharply in the summer of 2020, fell further as vaccinations became available in early 2021, and is now negligible. That pattern holds across age groups. That younger individuals were much more likely than older workers to report the pandemic being an issue in 2020 suggests that the results reflect not only health risk but also, perhaps, discouragement associated with businesses being closed or the difficulty of finding child care. 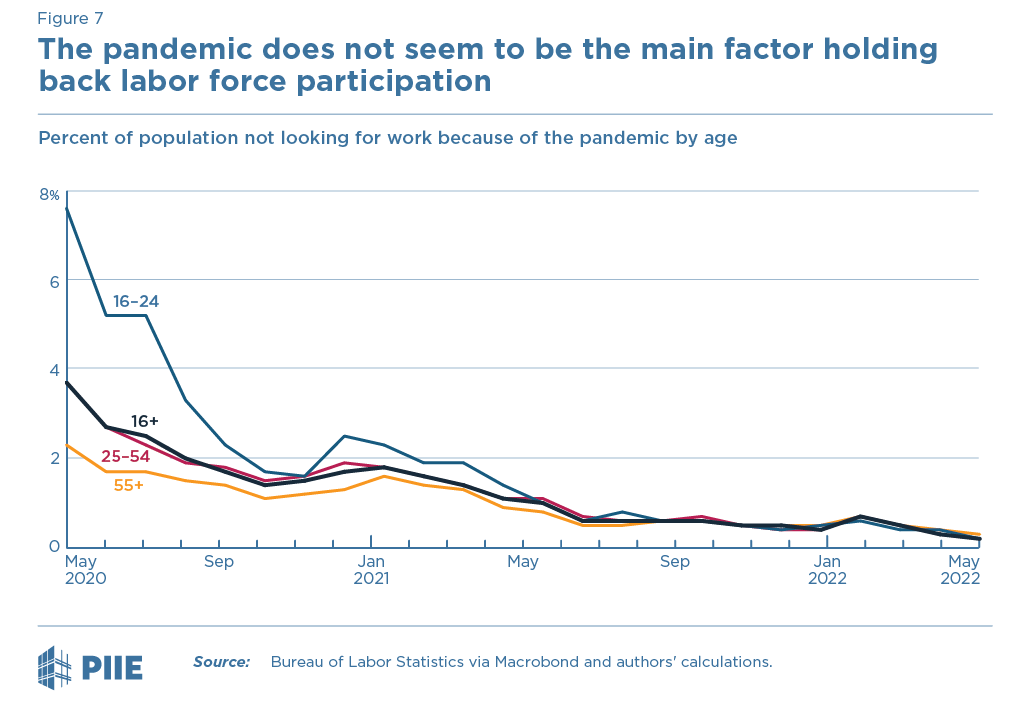 Some other factors that have held back labor force participation during the past few years are likely temporary as well. For example, some individuals may have supported themselves with pandemic savings, but those reserves are dwindling with time. The decline in stock prices since the beginning of 2022 has further reduced the financial buffers of some households.

The decline in part-time employment is consistent with the larger participation shortfalls for younger and older individuals given that workers in those groups are more likely to work part-time. On average, individuals working part-time are probably less attached to the labor force than individuals working full-time and thus might be harder to draw back into the workforce even with strong labor demand. 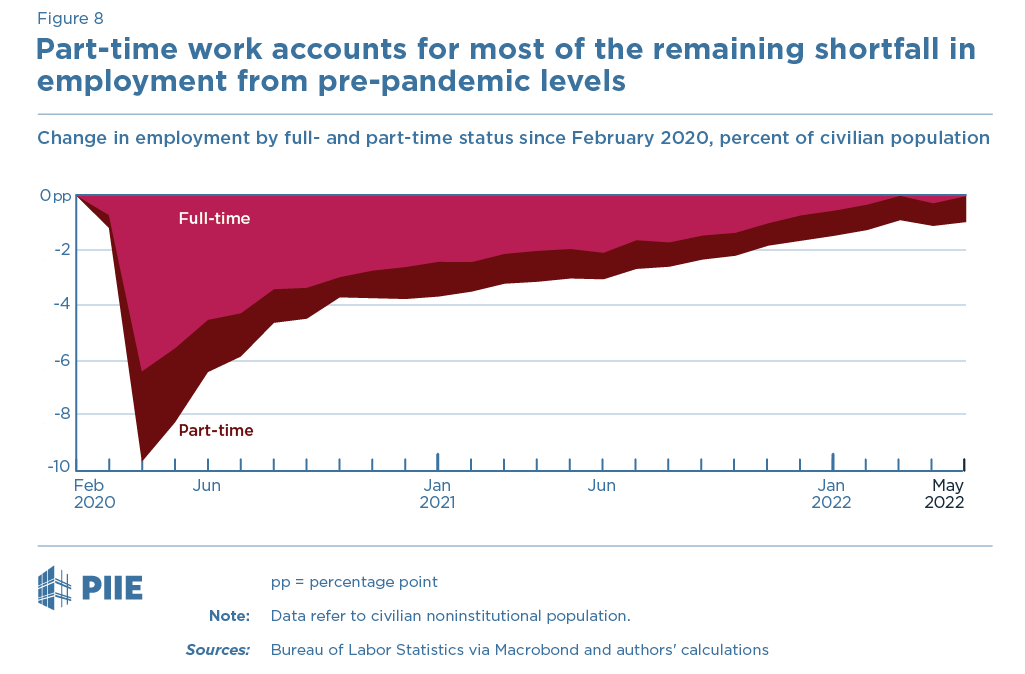 Altogether, the May employment report depicts a labor market that has slackened a bit over the past few months but is still tight by historical standards. Employment and wages rose briskly this spring, albeit less so than in the winter, and the unemployment rate remains very low. Moreover, there is little hard evidence that labor force participation will rise materially further in the coming months.

With a still-tight labor market, and price inflation well above the Federal Reserve's target, the stance of monetary policy will need to move from supportive to neutral—and perhaps beyond neutral—over the remainder of this year. The Federal Open Market Committee will continue to signal its intentions to raise the federal funds rate and will carry out those intentions until incoming data show a marked change in economic conditions.