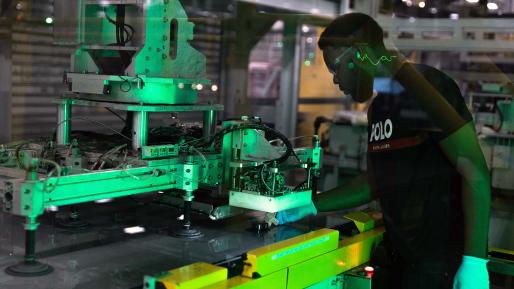 The climate change legislation newly brokered after arduous talks to secure Senator Joe Manchin's (D-WV) pivotal vote is intended in part to jumpstart US solar manufacturing—fabrication and assembly of materials across the solar value chain—and provide greater energy security by reducing US reliance on Chinese solar suppliers. While a big step forward, the bill's tax credits are inadequate for altering this reliance. They would help close the gap in solar module production but would leave the United States dependent on China for critical links in the supply chain. This dependence needs to be addressed. The current situation is a significant source of US strategic vulnerability.

Nowhere is this more evident than in solar energy. US solar is deeply dependent on China and Chinese-linked subsidiaries in Southeast Asia. In February, the Department of Energy released a "deep dive" on US solar supply chain resilience. The report catalogs Chinese dominance in solar, which extends throughout the supply chain from polysilicon to solar modules.

Polysilicon is to silicon what aluminum is to bauxite: a refined product used in myriad downstream industrial applications. Although silicon is among the most abundant industrial minerals on Earth—so abundant that the US Geological Survey doesn't even bother providing reserve estimates in its annual mineral commodity summaries—China nevertheless dominates global production, accounting for between 70 and 80 percent. Polysilicon is then melted into ingots before being sliced into wafers that are then used to produce photovoltaic cells. China's market share in each is 98, 97, and 81 percent, respectively. Its market share in modules—the end-use product installed in solar arrays—is 77 percent.

These market shares are beyond pivotal. For all intents and purposes, China is a monopoly provider of the materials that underpin solar energy. While US imports of solar modules are more diversified than these numbers would suggest, 75 percent of 2020 US imports were from three countries—Malaysia, Thailand, and Vietnam. These countries depend on China for inputs that in many instances are owned by Chinese interests seeking to circumvent decade-old tariffs on Chinese solar products.

From an energy security perspective, this situation is untenable. US reliance on China to supply the US energy transition enables China to use its dominant position to exert market power, setting the global price. China's solar production costs are 35 percent lower than Europe, 20 percent lower than the United States, and 10 percent lower than India due largely to lower labor and energy costs and lavish government subsidies dating back to the mid-2000s. These cost advantages have deterred capacity development outside China, enhancing China's strategic leverage. In 2010, China took advantage of its similarly dominant position in rare earth metals by reducing its export quotas by 40 percent to both reduce input costs for Chinese manufacturers and press Japan over the disputed Senkaku Islands.

But even if China were not inclined to use solar as a political leverage point, its solar supply chains are intertwined with mass human rights abuses. Xinjiang is the locus of one of the largest campaigns of government-inflicted human rights abuses in the world, including forced labor, which has infected the supply chains of companies both inside and outside the region. The Uyghur Forced Labor Prevention Act has established very high standards for assuring that Chinese products imported to the United States are not produced with forced labor. If the United States is to transition toward solar in earnest, the status quo is not tenable.

The climate change legislation that appears headed for Senate approval, known as the Inflation Reduction Act of 2022, seeks to remedy this situation with $30 billion in proposed tax credits for spurring US domestic production of various types of renewable energy: solar, wind, and geothermal, among them. The bill provides these incentives on a per-unit basis, ranging from four cents per direct current watt for solar cells to $3 per kilogram for polysilicon and $12 per square meter for wafers. These credits are virtually identical to those passed by the House in 2021 but previously stalled in the Senate as part of the Solar Energy Manufacturing for America Act. These tax credits are supplemented by an additional $10 billion in tax credits for developing the necessary manufacturing capacity.

The $40 billion in tax credits is a start—but it is not enough. The manufacturing tax credits would help close the gap in some areas but not in others. A 2021 report by the National Renewable Energy Lab (NREL) estimated the Solar Energy Manufacturing for America Act could, depending on the total dollar amounts of credits offered, help US manufacturing capacity grow to 19-22 gigawatts (GW) for PV modules, roughly equal to newly installed PV capacity (21 GW) in 2021, and effectively offset US imports.

But other, lower value-added aspects of the supply chain would still be exposed. The estimated additional 4-6 GW of wafer/ingot manufacturing capacity from the credits—which would be all the capacity the United States would have—would still leave  it highly dependent on imports (and thus China). By comparison, China has 400 GW of wafer production capacity either already built or under construction, with several new-generation plants having annual capacity of 20-50 GW each. A 6 GW increase in US wafer capacity would bring non-Chinese wafer capacity to an underwhelming 4 percent of total. This key strategic vulnerability would remain.

Yes, the Inflation Reduction Act would be a breakthrough that would help the United States meet the Biden administration's ambitious goal of 50 percent emissions reduction by the end of the decade. In the current climate, it's a big step forward. But in terms of solar supply chain security, it is not enough.