Raising the US Wage Floor: The International Perspective

Income inequality in the United States has increased in recent decades to levels exceeding those in comparable large advanced economies—and even more so in traditionally more equal smaller European economies. Moreover, many studies have found that among advanced economies, paying higher wages to low-wage workers reduces inequality and increases economic growth.

Figure 1 shows the so-called 90/10 disposable income share ratio—the ratio of the average income of the top 10 percent of earners to that of the bottom 10 percent. Latest available data from 2012 reveal that the top 10 percent of Americans earn 17 times more than the bottom 10 percent, while in the G-7 only Japan, Italy, and the United Kingdom have ratios above 10. Figure 1 further shows that the increase in US income inequality since 1990 has been unprecedented among large industrial nations. It is also noteworthy that income inequality in the United Kingdom, which was comparable to the United States in 1990 (a ratio of 11 at the time), has reduced slightly since then. 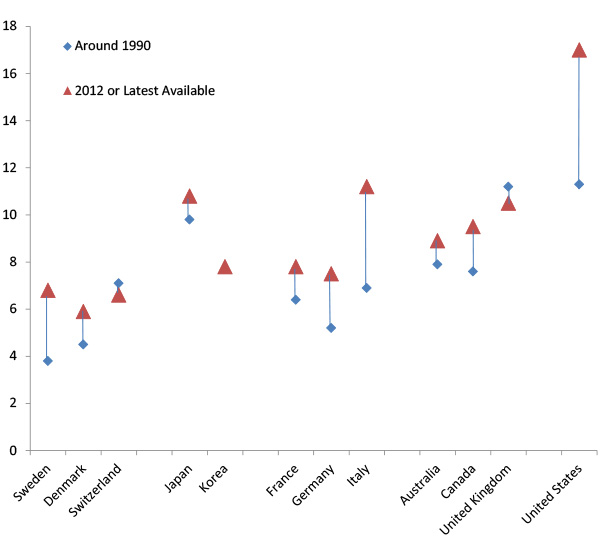 Income inequality rises with changes on both ends of the income range. The phenomenal rise in income enjoyed by the top earners in the United States has attracted substantial attention from economists and politicians. But slumping wage and income1 at the low end of the spectrum has garnered far less attention, especially in an international comparative context.

A widespread assumption in economics, generally attributed to Arthur Okun2, is that there is an inherent tradeoff between efforts to reduce inequality and economic efficiency. According to this school of thought, raising taxes or expanding some types of government programs to promote wage and income equality in an economy can impede growth and job creation. On the other hand, recent economic research from the International Monetary Fund (IMF)3 and the Organization for Economic Cooperation and Development (OECD)4 has examined a variety of countries and concluded that excessive income inequality is correlated with lower economic growth. Cross-country comparisons of income inequality and especially wage and income levels at the low end make it clear that paying higher wages to low-wage workers in fact creates jobs.

Figure 2 shows the most recent available average income levels for the first and second income deciles5 in the United States, the G-7, other Anglo-Saxon countries, and smaller, traditionally more equal European economies. The incomes of the bottom 10 percent in the United States are low compared with those in other English-speaking nations, Germany, France, smaller European economies, and the OECD-30 average but marginally higher than those in Japan, Korea, and Italy. For the second income decile earners, the United States is on par with the OECD average, Germany, France, and Australia but still below Canada, the United Kingdom, and the smaller European countries. 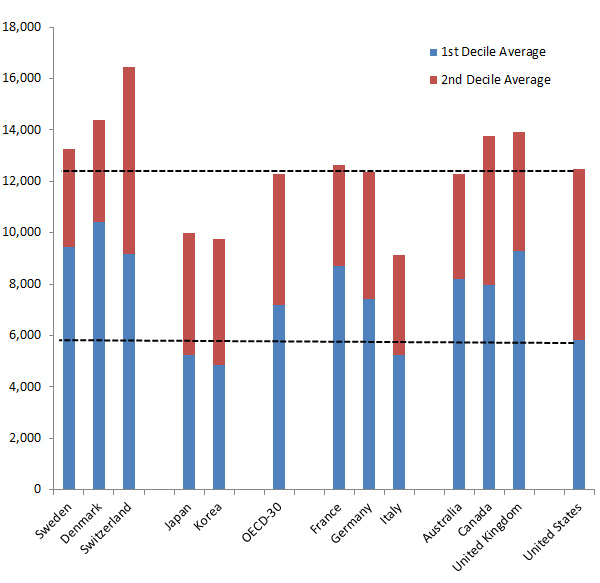 Note. The data refer to equivalized household disposable income of people at different points of the distribution.

Figure 3 illustrates that among advanced economies generally comparable to the United States, there is a strong positive correlation between higher wage and income levels in the first and second income deciles and subsequent years' employment levels. In this group of economies, the more you pay your low-wage workers, the more jobs you create and the higher your employment rate tends to be. Countries like Italy, Korea, Japan, and the United States, which have the lowest wage and income levels at the low end, also have the lowest employment rates, while economies like Switzerland, Denmark, Sweden, Canada, and the United Kingdom, which pay low-wage workers better, also generate more jobs and have higher employment rates. 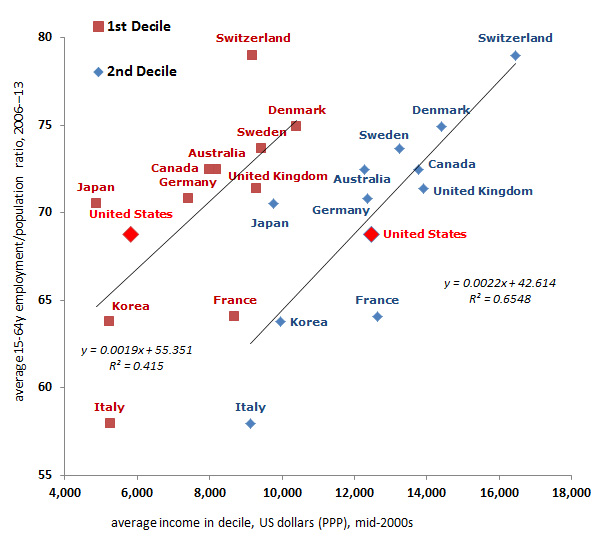 A separate issue with respect to comparisons between wage levels in the United States and other countries is whether increasing American wages, particularly at the lower end, might undermine the ability of US firms to compete overseas. As a result of higher wages, according to this concern, individual firms might opt to transfer a greater share of their inputs overseas, out of fear of losing markets both at home and abroad. The data, however, indicate these concerns are not well-founded.

For comparison, the figure for machinery manufacturing is 2.8 percent of workers affected and a 14.9 percent mean wage increase, while electrical equipment manufacturers would increase wages for 4.5 percent of workers by an average of 19.7 percent per worker. Thus, the fear of offshoring or loss of competitiveness abroad should not stifle increased wages in the industries with the greatest share of affected workers.

But even in highly tradable industries, overall competitiveness should not be unduly affected by increasing wages for the lowest-paid US workers. To illustrate this at the aggregate level, compare data from the Organization for Economic Cooperation and Development on the “low-pay incidence” for available countries—that is, the share of full-time workers earning less than two-thirds of gross median earnings—with manufacturing exports per capita. A country that relies on poorly paid workers to fuel industrial exports might be expected to outperform other countries on a per capita basis. Figure 4 displays data indicating no such relationship. In fact, Belgium, which has the largest per capita manufacturing exports, has the lowest incidence of low-paid workers. 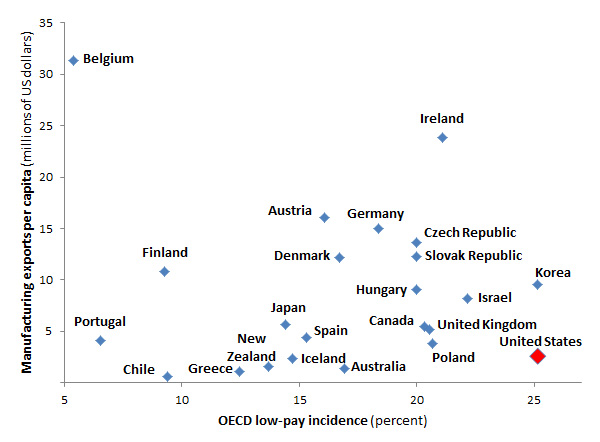 Several reasons help explain why higher wages have not reduced competitiveness substantially. First, businesses are burdened by many costs—transportation, utilities, financing, etc.—beyond labor. The 2014–15 Global Competitiveness Index of the World Economic Forum was topped by Switzerland, Singapore, and the United States, which are hardly among the lowest in terms of wages.

In addition, many economists have found that competition in export markets leads companies to raise productivity and wages. For example, German firms that pay high wages before entering the global marketplace are better able to compete abroad by achieving and maintaining higher productivity. Economic studies show that a firm paying higher wages than others in the industry is better able to attract and keep a more talented and effective workforce. Workers who are paid more than they expect to earn elsewhere, or with greater potential for future raises, are also less likely to switch jobs, reducing expenses incurred to hire and train new employees.6

Continuing advances in automation pose a far greater concern than trade competition in keeping industrial jobs from disappearing. Increasing pay and demanding higher skills and commitment from workers is a better way to get ahead of the competition than keeping wages low, because more dedicated and productive workers can provide services that technology cannot.