Questions and Answers on the Argentina Default

On July 30, negotiations in New York failed to resolve differences with a group of bondholders (some of them in speculative funds derided in Argentina as the "vulture funds") demanding full payment on $1.3 billion in bonds it owns. The New York court overseeing the case declared Argentina to be in default on the grounds that it failed to make debt payments that fell due this week. But Argentina claims that it is not in default because it has transferred a $563 million interest payment due to a separate group of bondholders who agreed to less than full payment on its debts in negotiations that took place in 2005 and 2010. Ratings agencies have reacted by downgrading Argentina's bonds to default grade, and the cost of insurance on Argentine bonds has risen. These latest developments are widely expected to damage Argentina's economy and complicate future debt restructurings of problem countries. Following are some questions and answers on the outlook for Argentina.

Q: So, is Argentina in default?

A: Yes. The International Swaps and Derivatives Association (ISDA) today effectively declared Argentina in default, ruling that a 'failure to pay' event occurred on July 30. This could trigger payments worth up to $1 billion on credit default swaps (CDS).

Q: How does this default compare to the 2001 default that eroded the economic fortunes of millions of Argentines and kept the country out of capital markets for over a decade?

A: Both the character and magnitude of the two episodes are different. In 2001 Argentina was unable to pay its $81 billion debt. This time the level of debt is much less—Argentina owes $29 billion to the exchange bondholders—and Argentina has the ability to pay that amount. In 2001 reserves were only around $14.5 billion; today, while the level of reserves has been falling, Argentina has about $29.7 billion in foreign reserves.

In 2001 Argentina was experiencing its third year of negative GDP growth. Growth estimates for this year range from anemic to negative, but for the past decade GDP growth has been relatively robust. (According to Argentina's data reported to the International Monetary Fund [IMF], rates were over 8 percent per annum for most of the period 2003–11). Unemployment was at about 20 percent; now it is much better, at about 7 percent. The political situation is also more stable. In 2001 two presidents had been forced to leave office. President Fernandez de Kirchner is in her second term of office.

The other difference is the impact on other Latin American countries. In 2001 there were contagion effects through markets. In this case, investors seem to consider Argentina a specific, sui generis case. Contagion may occur, however, if there is no quick resolution. If Argentina's economy starts to be affected, it will very likely affect the Southern Common Market (Mercosur) countries, particularly Brazil, which is the most closely tied to Argentina through the goods market.

Q: Why would Argentina let the situation get to this point? Why did it let the clock run out?

A: Argentina was genuinely surprised at several of the court decisions; after all, it was supported by amicus curiae briefs by actors like the United States and France. Argentina had spent most of the year sending signals that strongly suggested that the administration was serious about returning to international capital markets:

This past year, Argentina has exhibited a willingness to negotiate that has not been seen in the past decade and a half. As a result of this and other factors, there was a resurgence of interest in investing in Argentina this spring, with announcements of interest by foreign investors and a steady increase in the value of the Merval. It seemed that investors were starting to reward Argentina for initiating policy steps that would bring it back to capital markets.

A few important caveats should be noted to the above.

A: No. Argentina is still solvent. That said, a technical default could have some negative consequences. The ruling in the holdout case can exacerbate Argentina's economic pressures and may wipe out the policy space that government officials had started to open with a number of steps that demonstrated a willingness to adjust course.

As mentioned above, Argentina is currently facing a number of economic pressure points: low (some estimate negative) economic growth, falling reserves, and the second- or third-highest inflation rate in the world, behind that of Venezuela and maybe that of Iran. One could envision pressure on the peso and the already large gap between official and blue (black market) rate, which might lead to another devaluation. This could lead to more protests and pressure to raise wages, which could have even more upward pressure on inflation.

Q: Will this cause an economic crisis in other Latin American countries?

A: Unlike the emerging market crises of the 1990s and the 2001 Argentine crisis, where financial crises spread from country to country through a contagion effect, this one has been self-contained. Investors seem to perceive this as a specific, isolated incident that does not convey information about the economic health or financial viability of other emerging markets. If Argentina's economy does suffer, then we would expect its closest trading partners—the Mercosur countries, particularly Brazil—to be affected through the goods market. January's devaluation already had an impact on Brazilian exports. Another devaluation would have repercussions as well, particularly in highly integrated manufacturing sectors.

Q: What is Argentina's main concern?

A: Its access to markets is an important concern right now. A more long-term worry is how to get the economy performing better. Argentina has tremendous resources, both human and natural, and was once on the vanguard of emerging markets in terms of economic development. However through policy missteps and bad luck it has managed to keep from capitalizing on its great potential. In 1870, Argentina's per capita GDP was about equal to Canada's, $1,468 to $1,695, respectively, (all in international dollars, so comparable) and more than four times as much as South Korea's. This is shown in figure 1. 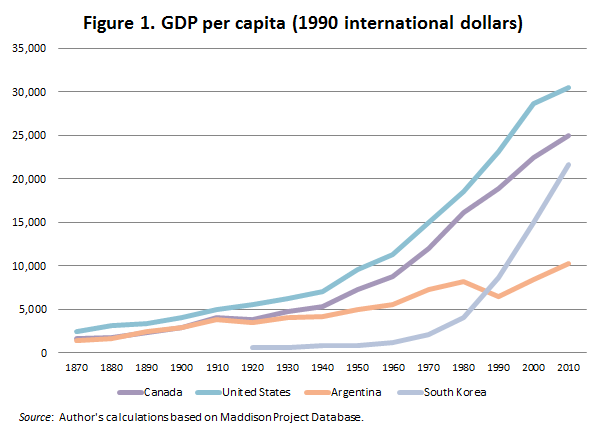 Figure 2 below plots Argentina's and Korea's per capita GDP as a multiple of per capita GDP in the United States. From 1870 to 1930, Argentina's per capita was at least 60 percent of US GDP, besting Korea by a factor of six. By 2010, Argentina had sunk to about a third of US GDP; Korea, more than 70 percent. Argentina's main challenge is, arguably, to figure out how to bring its relative standard of living back to where it was a century ago. 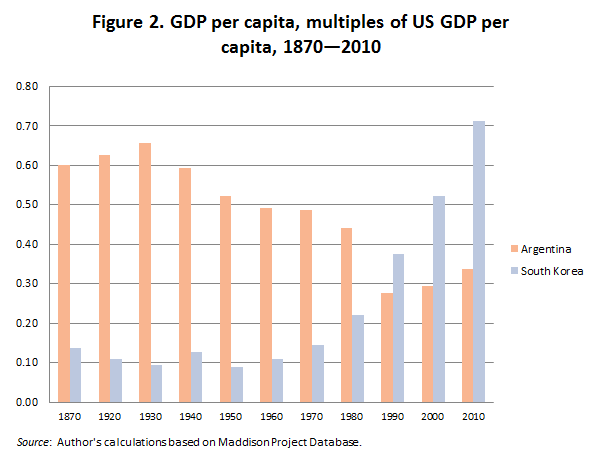 Argentina and Its Creditors after Default: More Questions and Answers