The European Commission estimates the euro area economy grew at 2.5 percent in 2017, an upward revision of its previous estimates, suggesting that the pattern will continue in 2018. This trend is at least one percentage point above reasonable estimates of the euro area’s potential growth rate. The still subdued levels of headline (and core) inflation in the euro area remain well below the ECB’s target, indicating that significant unused capacity remains a problem after the euro area crisis. But at least the strong cyclical recovery is finally pushing the European economy back towards full utilization.

Since the 2012–13 recession, the strong euro area growth numbers have been driven by domestic demand increases in consumption and investment, while contributions from net exports have fluctuated with the global business cycle and have been rising during 2017 (figure 1). 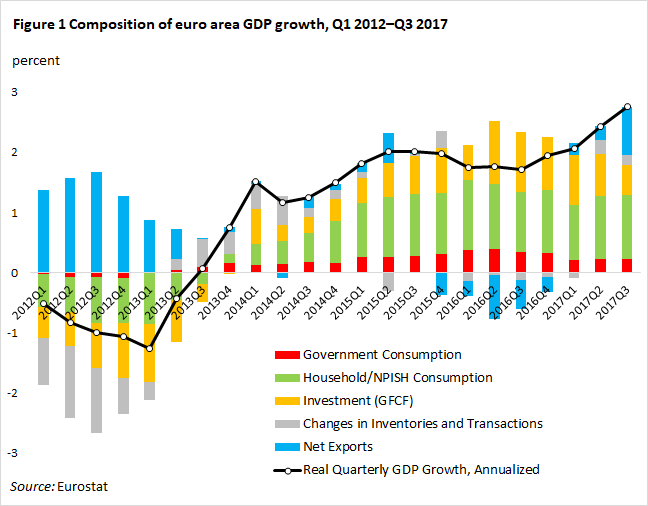 The key to continuing the euro area’s recent strong economic performance will be the ability of the region’s labor markets to continue to generate new jobs.

Recent labor market performance in Europe has been very strong, and EU[1] and euro area unemployment rates as of late 2017 are now back at roughly the average level of the era from 1999 to 2007, prior to the global financial crisis (figure 2). Talk of an unemployment crisis in Europe is thus obsolete. 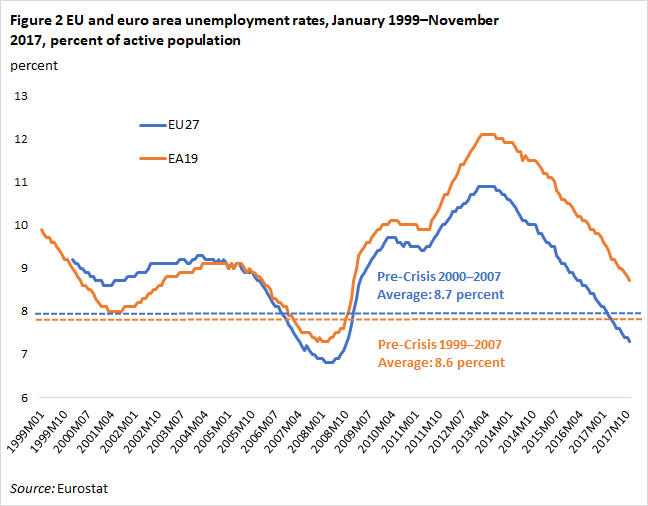 But focusing on the decline in unemployment actually underestimates the strength of the labor market revival in the euro area and across the continent. A better and simpler metric for the strength of a labor market is the so-called employment rate, which expresses the share of total population in a given age group with a job. Unlike the unemployment rate, which is computed as a share of the population employed or actively looking for a job, the employment rate is not affected by changes in labor force participation. Figure 3 shows the development in the employment ratio for 15- to 64-year olds from the introduction of the euro to today. 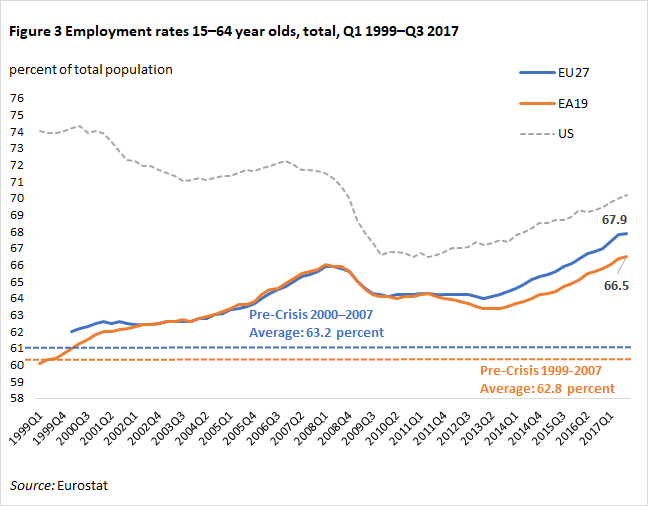 Figure 3 makes it clear that both the euro area and the European Union as a whole have fully recovered from the effects of the euro crisis, and are at historically high employment rates with approximately two-thirds of working-age Europeans now employed. Figure 3 also illustrates the contrast with the United States, where despite rising employment rates since 2011, levels are not yet back to where they were prior to the crisis.

The strength of recent European job creation extends to large parts of the continent and is not just a matter of strong German performance pushing up the regional average (figure 4). 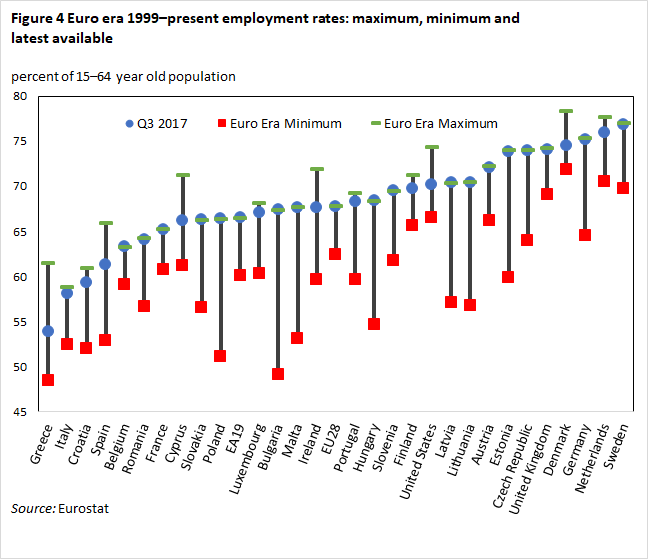 Most euro area and EU members are now at their highest employment rates experienced since 1999, or very close to such high levels (figure 4). In addition to Germany, the countries of Belgium, Romania, France, Poland, Slovakia, Bulgaria, Malta, Hungary, Slovenia, Latvia, Lithuania, Austria, Czech Republic, the United Kingdom, and Sweden are currently experiencing their highest employment rates during the euro era. This is in other words a remarkably broad-based jobs boom in Europe. Even the worst hit euro area crisis countries—Greece, Spain, Cyprus, Ireland, and Portugal—are well off today compared to previous euro era employment lows.

The job growth rate varies according to gender and age. But as in the case of the United States, European men—often employed in the construction sector—suffered more job difficulties than European women (figures 5A and 5B). 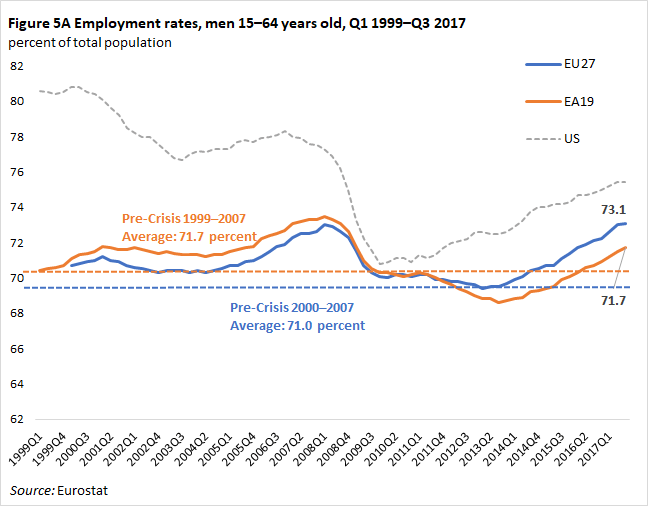 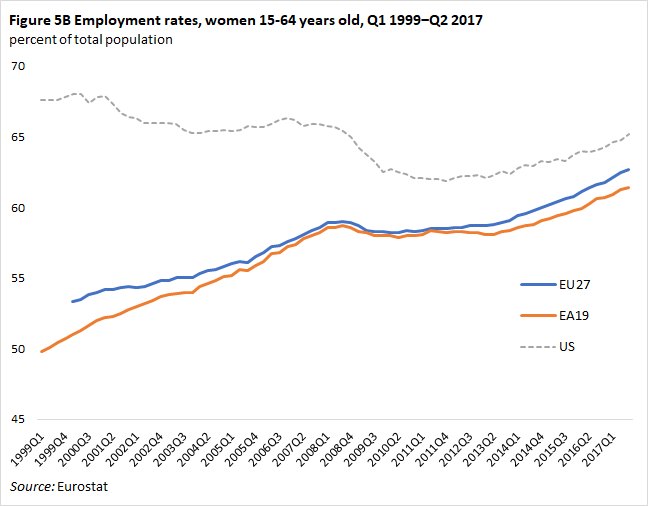 Only in late 2017 have employment levels among men returned to their pre-crisis average, while remaining well below their early 2008 peaks. Meanwhile, European women are now employed in record numbers.

Another long-term driver of rising employment in the European Union and euro area is the rise in the number of older workers with jobs (figure 6). 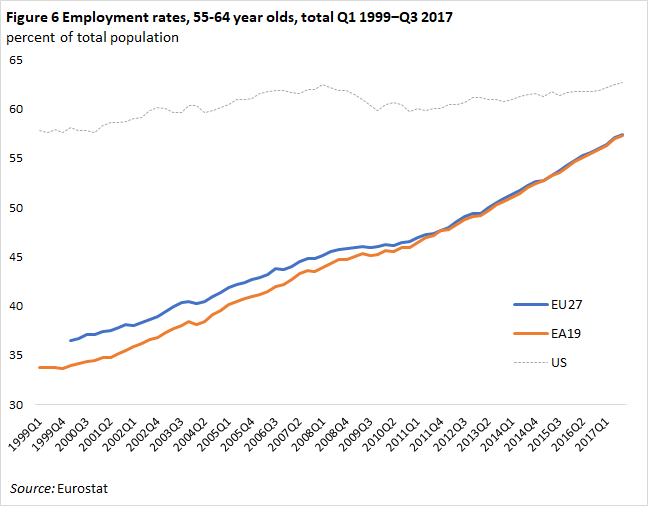 Employment rates for older European workers have risen by more than 70 percent during the euro era, albeit from preposterously low levels in the late 1990s, and are now approaching US levels—largely stagnant since 1999—of about 60 percent. Such large and persistent increases in old-age employment rates across the business cycle indicates that structural, permanent changes in European labor market regulation and pension system parameters (i.e., especially rising retirement ages) are the cause.

But the headline employment rate figures do not tell the whole story about labor utilization. To a degree, rises in part-time employment will inflate overall employment rates and not generate the expected increase in total hours worked. There is also the risk that the labor market rebound may not (yet) have reached those most hurt by the downturn among Europe’s young workers.

Figure 7 shows the development of the NEET ratio, which captures the share of young people "not in education, employment, or training"—effectively measuring the level of “wasted youth” in a country. 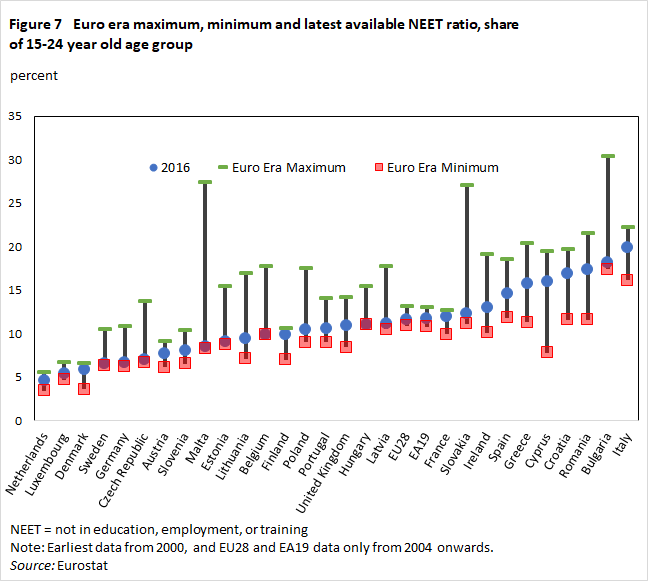 NEET ratios across the European Union using the latest available data from 2016 range widely, from below 5 percent in the Netherlands to around 20 percent in Italy. While European NEET rates are well below their euro era maximums in most countries, a substantial amount of growth, job creation, and educational opportunities are needed in Italy, Bulgaria, Romania, Croatia, Cyprus, Greece, Spain, and Ireland in order for the labor market upswing to also reach most European youth.

Meanwhile, European part-time work has been rising gradually throughout the euro era, but with no clear upward shift during and after the crisis (figure 8). But at least part of the sustained increase in European female employment since 1999 can be attributed to a rise in the frequency of part-time work for women. 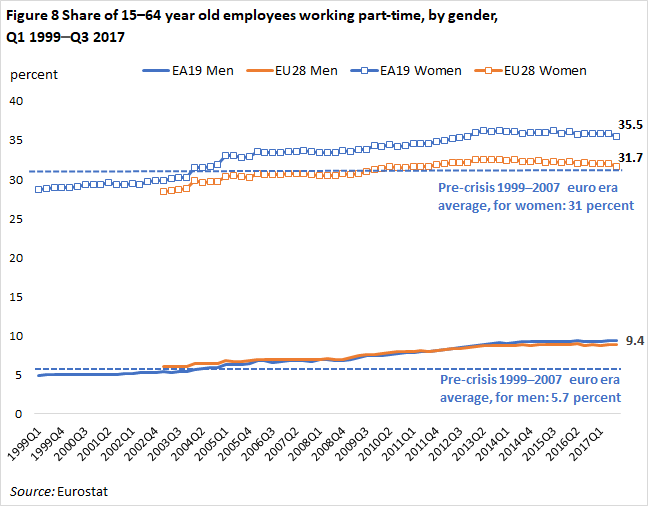 Examining the minimum, maximum, and latest available hours worked per capita in the European Union, figure 9 shows that despite favorable employment rate developments, Europe still has substantial work to do to increase its total labor utilization. Total hours worked per capita is the broadest metric of labor utilization, incorporating all national differences in working hours, part-time work, employment rates, and ages of labor market entry and retirement. 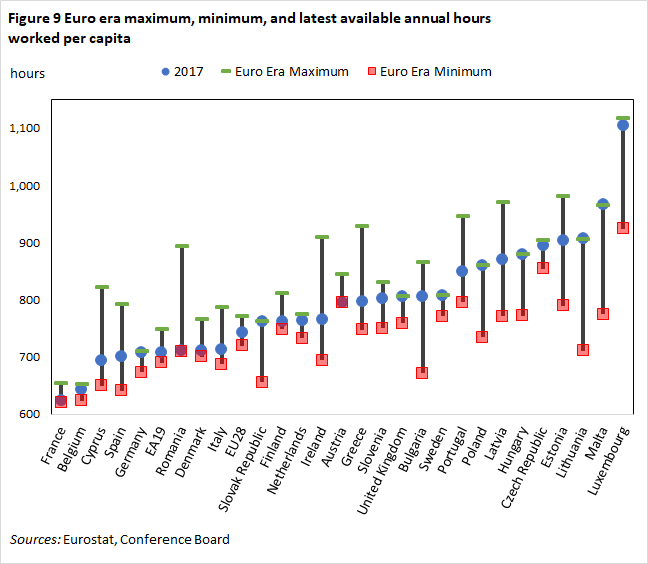 Most EU members remain well below the maximum labor input of the euro era, while large countries such as France and Germany continue to exhibit very low levels of overall hours per capita—a striking observation, especially for Germany in light of its otherwise strong labor market performance in recent years.

Moreover, even when adjusting for different levels of productivity in EU members and hence controlling for countries’ varying preferences for leisure (i.e., the richer you get, the more you tend to prioritize, or can afford, leisure over work resulting in lower overall hours worked in the country), figure 10 illustrates that several large EU members have a lot of room for additional increases in overall labor utilization. 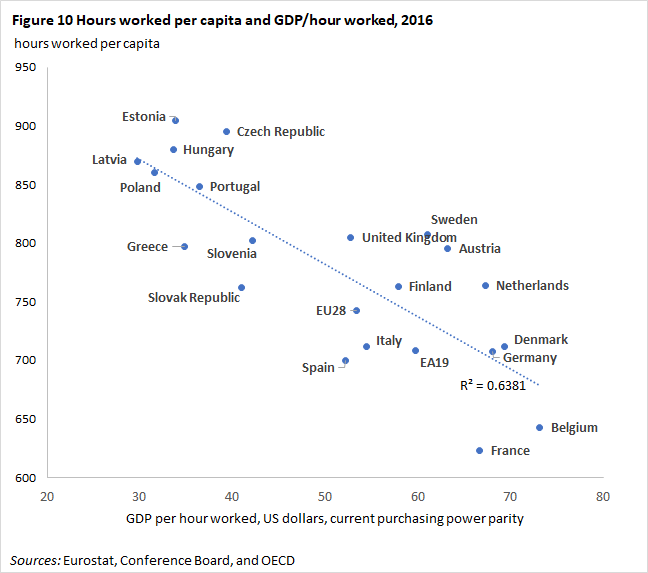 Figure 10 shows that France has approximately the same level of labor productivity as the Dutch, but that the French on average work more than 20 percent less. A similar difference is visible for instance between the EA19 and Sweden, or between Italy and the United Kingdom. Such differences could be dismissed as reflecting different national work-leisure preferences, but such large differences in actual work hours between otherwise relatively similar countries suggests that variations in national labor market rules and other regulations play a bigger role.

The data show that reformist European leaders like French president Emmanuel Macron still have a huge task ahead of them to make Europe’s labor markets function sufficiently well to sustain the continent’s welfare states in the era of aging populations.

1 The charts in this posting use EU27, not EU28 data, as only data for the former are available throughout the euro era. Because the missing data values are from small EU member states, the difference between reported data for the EU27 and the EU28 is trivial.

Economic Reforms in the Euro Area: Fiscal and Macro-structural Challenges