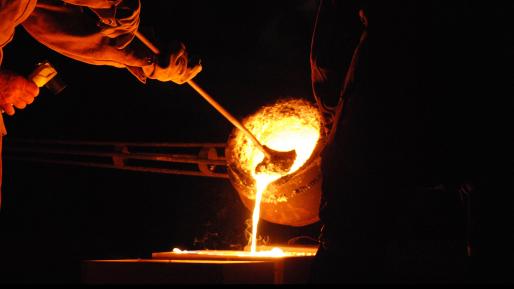 Peak copper and lithium? The siren song of the peak resource arguments

Rising commodity prices inevitably revive concerns about peak production of nonrenewable resources. In the past decade, peak panics revolved around oil and phosphate. As demand for the transition metals that are needed to fuel renewable energy systems—metals like aluminum, cobalt, copper, lithium, and nickel—ramps up, so will concerns that we are on a path to running out of these critical resources. As with previous panics, this concern will be overblown. Barring advances in asteroid or lunar mining, these resources are indeed finite. But this does not mean we have an accurate picture of just how plentiful or scarce they are.

Prices of industrial metals are indeed soaring. In April of 2021, the International Monetary Fund (IMF) industrial metals index reached its highest value in nearly ten years (figure 1). Prices for lithium have more than doubled in the last year. The causes are various, but low stocks due to COVID-19-related production shortfalls and surging demand as many economies re-open are the two main causes. And demand is expected to keep rising. Global production for many metals will need to increase three- to twenty-fold to meet the renewable energy obligations established by the Paris Agreement. 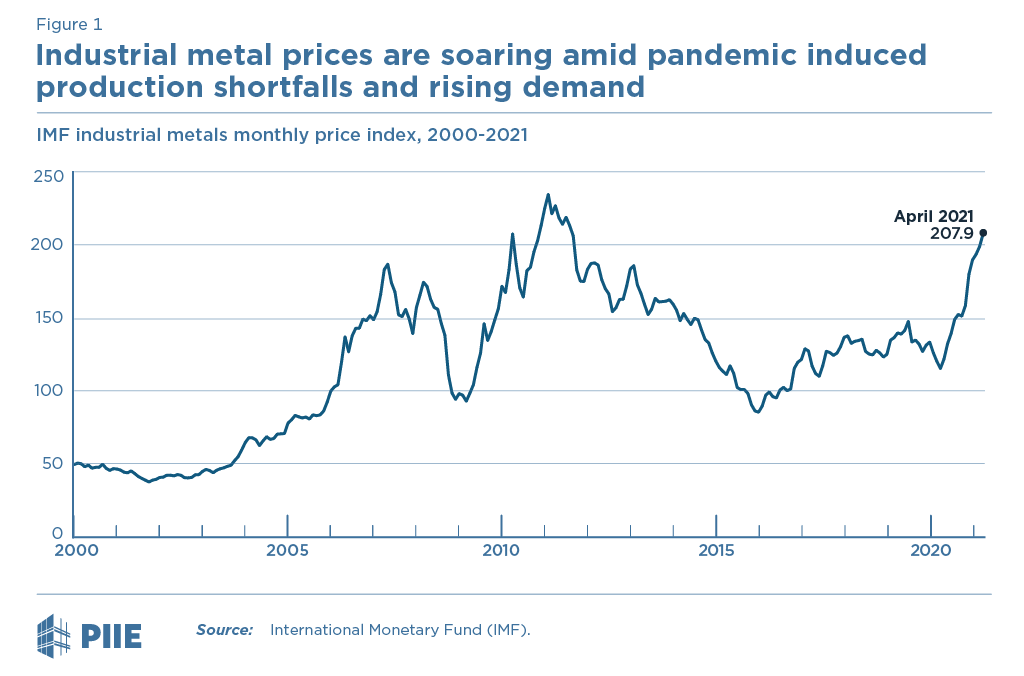 Rising prices and anticipated demand growth are fueling concerns about peak metals, specifically peak copper and peak lithium. According to peak commodity arguments, problems will arise not when the resources are depleted, but once peak production—the maximum amount extracted in a given year—is reached and the resource enters a terminal decline in productivity. At that point, the resource is unable to keep up with market demand, causing higher prices and geopolitical competition over dwindling stocks.

Fundamentally, all peak arguments are premised in the Hubbert curve, a technique developed by M. King Hubbert in the 1950s to forecast the timing of peak production of a resource in a given region. From an economic perspective, the Hubbert curve rests on some tenuous assumptions. For one, it assumes that exploration is neither price- nor demand-elastic: that mining companies spend just as much effort looking for new resources when prices are sky high as when they are in the gutter. For another, it assumes discoveries translate into production at a constant rate over time: A firm or government can’t find new resources and choose to leave them in the ground for extraction later.

The market conditions needed for Hubbert modeling to make economic sense would be a vast number of non-collusive firms, without market power, that do not make decisions about production volume or exploration effort in light of commodity prices (both current and anticipated). Otherwise, there could be incentives to stockpile, leave resources in the ground, or expand exploration effort. And this is decidedly not how metals markets work: Because of relatively high capital barriers to entry, mining is often highly concentrated among a small number of larger players, and prices obviously fluctuate over time.

However, most peak arguments in the popular and trade media are not so sophisticated, instead focusing on the ratio of current and forecast production/extraction to reserve estimates. For example, nickel production in 2020 was estimated to be 2.5 million metric tons with a reserve estimate of 94,000,000 tons, implying a 38-year global supply of nickel at constant extraction rates. However, if demand for nickel were to grow at nearly 30 percent annually—as Fitch has forecast for nickel demand for EV batteries—between 2021 and 2030, the entire reserve would be exhausted before the end of the decade. A dire situation, right?

Not necessarily. And that’s because unlike the assumptions of the Hubbert model, exploration effort and even reserve estimates themselves are highly price-elastic. The 21st century commodity boom (2002–15) catalyzed a gold rush–like frenzy of exploration effort, resulting in radical upward revisions of proven reserves for a host of commodities including oil and gas but also transition metals. Moreover, reserve estimates, such as those reported by the US Geological Survey, are not set in stone but rather are based on surveys, from which estimates of geologic resources (mineral concentrations that have been sampled and surveyed) and reserves (the subset of resources “from which a usable mineral or energy commodity can be economically and legally extracted at the time of determination,” i.e., given present technology and market prices) are made.

That’s why production of key transition metals like copper, nickel, cobalt, and lithium were able to balloon over the past two decades (table 1) while reserve estimates grew rapidly as well (table 2): Higher prices catalyze exploration efforts and convert resources to reserves, as the resources become economically viable at higher price points: Markets adapt. In 2001, global copper reserves were estimated at 340,000,000 metric tons; production between 2001 and 2021 exceeded that amount by 10.4 million metric tons—and the reserve estimate still more than doubled in the intervening two decades. 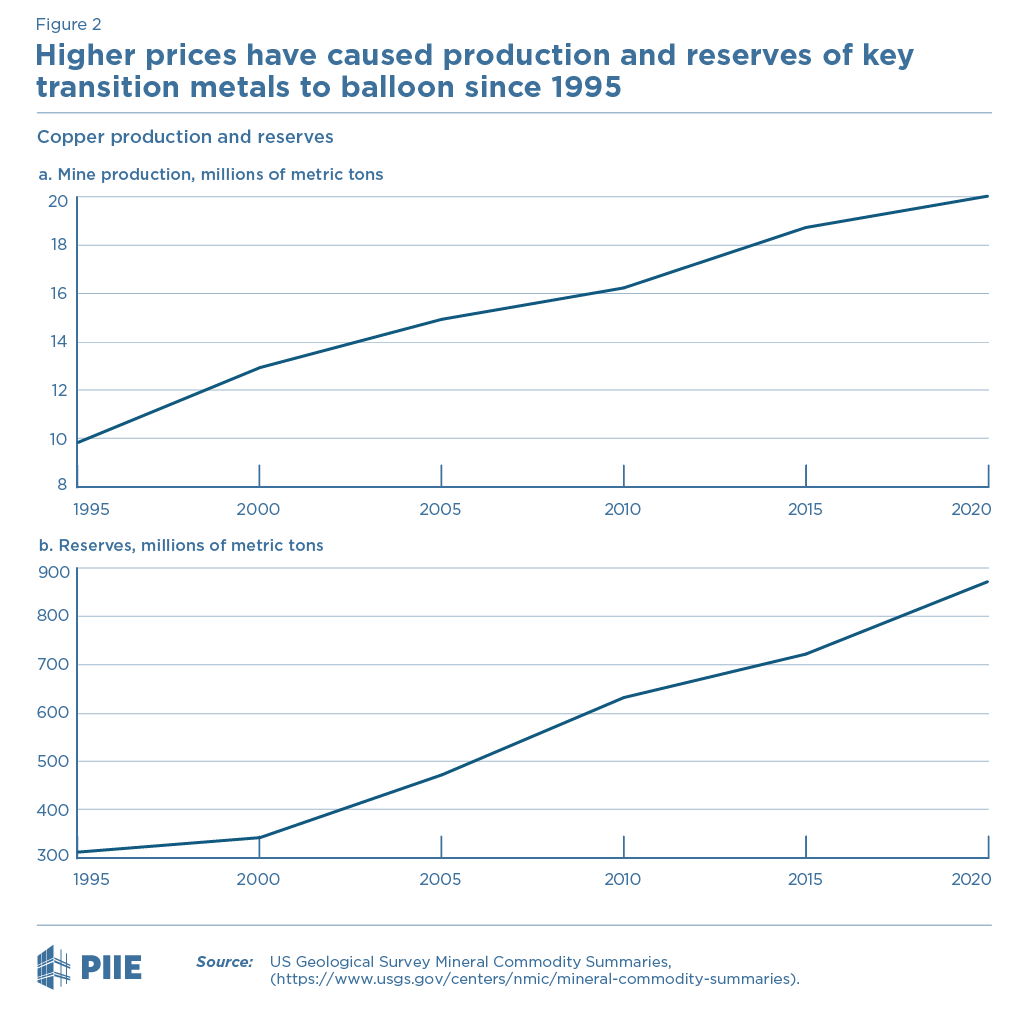 Peak arguments resurface over and over because they both seem intuitively plausible and play on humanity’s fundamental fear of scarcity. But they are almost always wrong. A decade ago, amidst high oil prices and the Arab Spring, industry analysts were concerned about peak oil production. Today, industry analysts are concerned about peak consumption. The stock of oil as a resource may be finite, but humanity’s relationship therewith is and was bound to change over time due to changing technology. Before 1850, oil had no widespread role in human civilization. After 2050, it may return to that status.