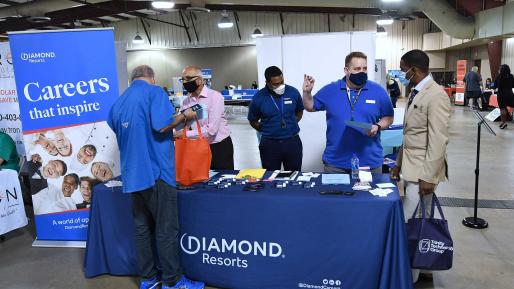 The US economy added 850,000 jobs in June, a noticeable pickup from the average of 546,000 jobs over the previous three months and much faster than the pace in the three months before that. This still leaves the economy 9 million jobs short of its trend. At the same time the unemployment rate rose to 5.9 percent while labor force participation was unchanged. The “realistic” unemployment rate (which adjusts for the unusually large reduction in labor force participation) was flat.

While the economy is still missing millions of jobs, numerous other signs were more characteristic of a very tight labor market in which demand for jobs was plentiful but supply remained constrained. Job openings and quits have both been at record levels, and in June there were 0.9 job seekers for every job opening, only slightly less tight than the labor market just prior to the pandemic. Although wage growth moderated in June it remained above previous trends. Moreover, the officially reported numbers understate true wage growth because many lower-wage leisure and hospitality workers were added to employment in June. Over the past three months nominal wages were likely growing at a more than a 6 percent annual rate, faster than in any pre-pandemic three-month period since the early 1980s.

Looking forward there is room for continued rapid job growth, particularly if the rate of unemployed workers taking jobs rises to more normal rates over time. The two big open questions are: (1) what is the relative pace of demand and supply improvements in the labor market, an issue that will affect the pace of nominal wage growth and price growth and (2) will the economy be able to close the full 9 million jobs gap quickly or will the last few million jobs be more difficult because some people have permanently left the labor force as a result of the pandemic?

The gap between the labor market and normality narrowed in June but the economy still remains 9 million jobs short of its pre-pandemic trend as shown in figure 1. 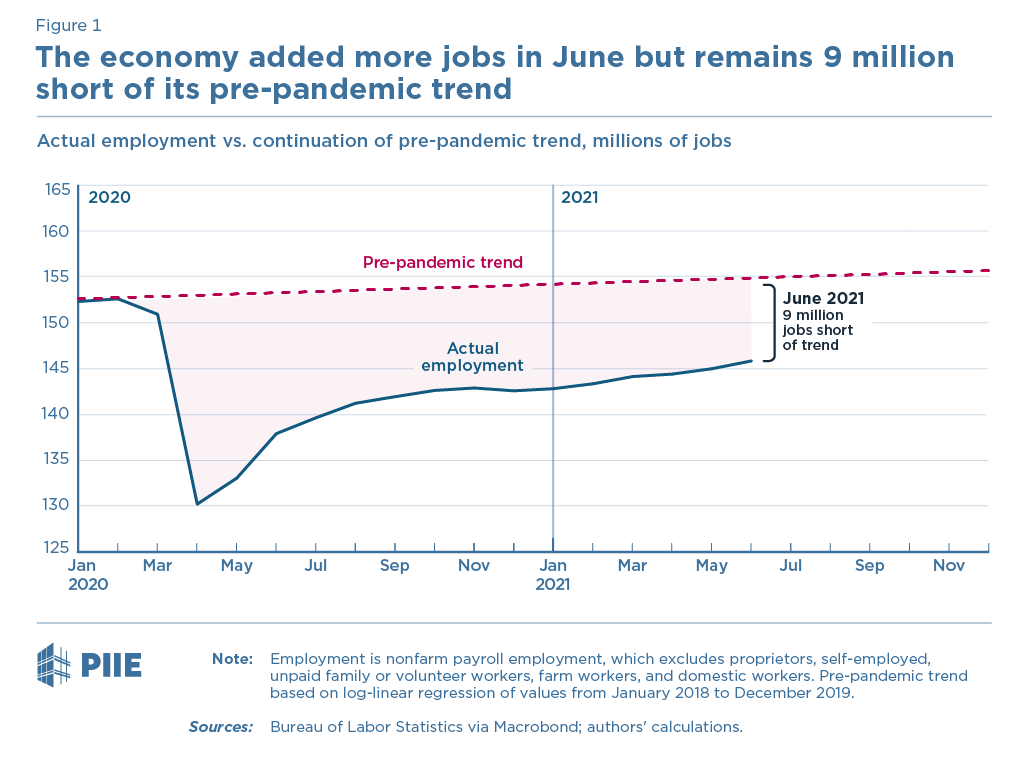 The gap is also evident in the unemployment rate, which remains elevated, but especially in the “realistic” unemployment rate, which adjusts for misclassification and the unusually large decline in the labor force participation rate (figure 2). In total 2.1 million fewer people are in the labor force than would be expected given the overall state of the economy. This is consistent both with the still depressed labor force participation rate and employment-population ratio, which are 1.4 and 2.8 percentage points below their respective pre-pandemic values (adjusted for demographic changes). 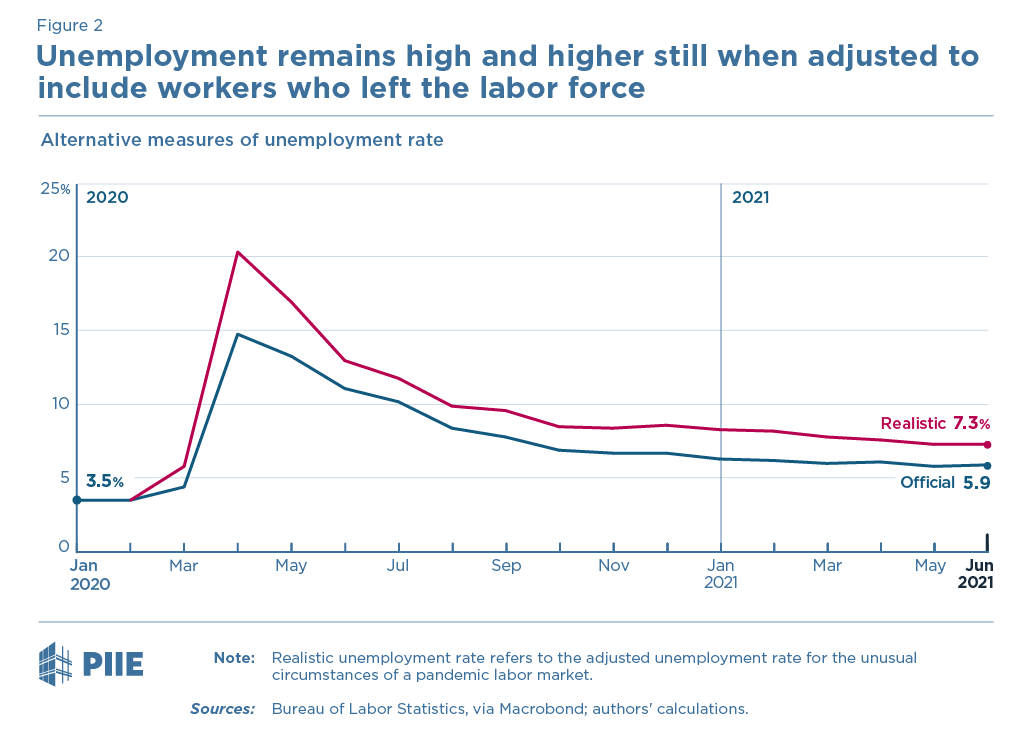 The payroll survey of employers (which showed an 850,000 job gain) and the household survey of employees (which showed a slight increase in the unemployment rate while labor force participation did not improve) told conflicting stories in June. Part of the difference may be the result of noisy data, which is always an issue but is especially serious now in the rapidly changing economy. In general the payroll survey of employers is much more reliable than the much smaller household survey of workers. But a lot of the difference may be that the two surveys use different definitions. For example, if a self-employed person takes a formal job, that shows up as a job added in the payroll survey but no change in employment in the household survey. Other definitional differences include multiple job holders and farm workers. These issues around noise and definitions are a good reason why it is important to never place too much weight on any one number, especially for a single month’s noisy data.

An Unusually Small Number of the Unemployed Have Been Taking Jobs

In recent months, job growth has been restrained by the lower-than-expected rate of unemployed workers transitioning into jobs. In the first five months of 2021, only about 24 percent of unemployed workers moved into jobs each month, well below the 29 to 34 percent one would have expected given the overall state of the labor market (figure 3). That shortfall is a big deal, potentially amounting to 500,000 fewer jobs a month. A number of factors may have been holding back transitions from unemployment to employment including the difficulty of putting a complex economy back together, continued fears of COVID-19, increasingly long-term unemployed workers, and enhanced unemployment insurance benefits.

The rate of exit from unemployment decreased in June, but it is possible that this is just a result of the noisy data that shows no employment increases when workers are surveyed but large job gains when employers are surveyed. More important than the data in any one month is what is now six months of relatively low transitions into employment. 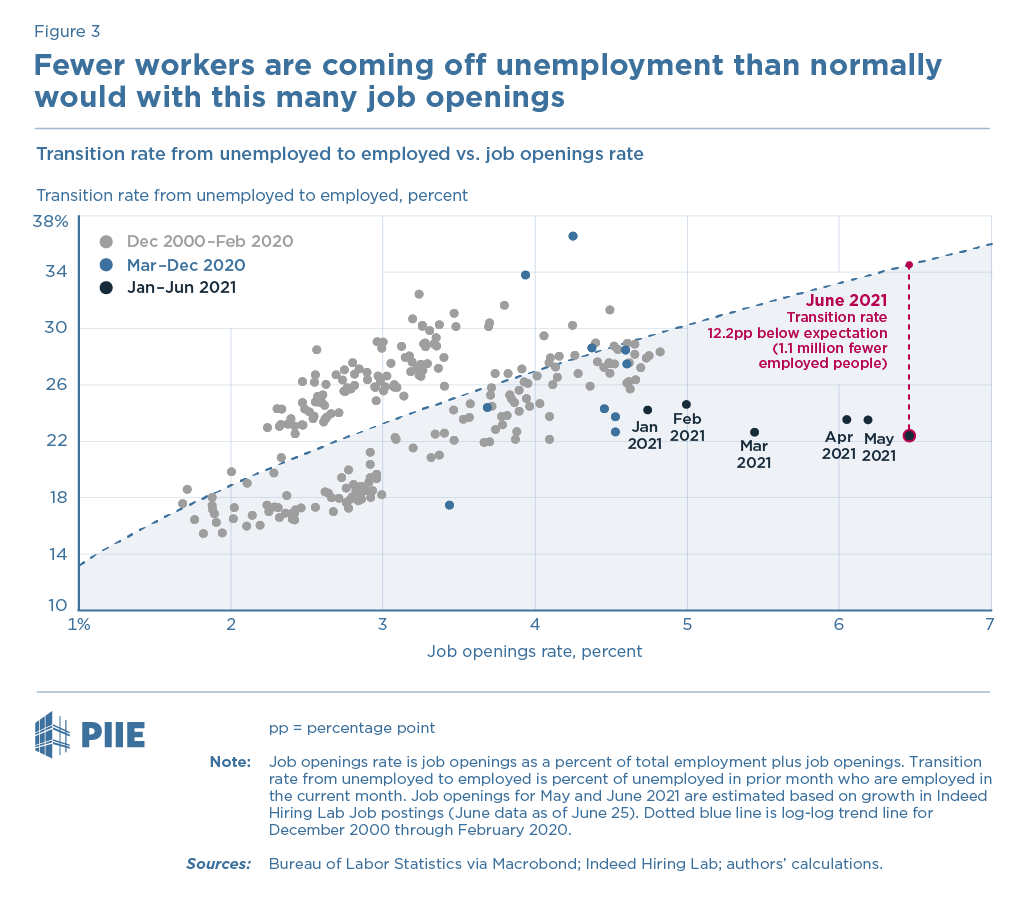 One sign of the tightness of labor markets is the fact that job openings and quits have reached record levels in recent months, showing both that jobs are plentiful and also that people have the confidence to quit their jobs knowing they will be able to find new ones.

At the same time, there were still an unusually high number of unemployed workers so that there were still 0.9 unemployed people for every job opening in June (or 1.2 adjusting for the unusual reduction in participation) as shown in figure 4, so in this sense the labor market still had somewhat more slack than it did just prior to the recession. 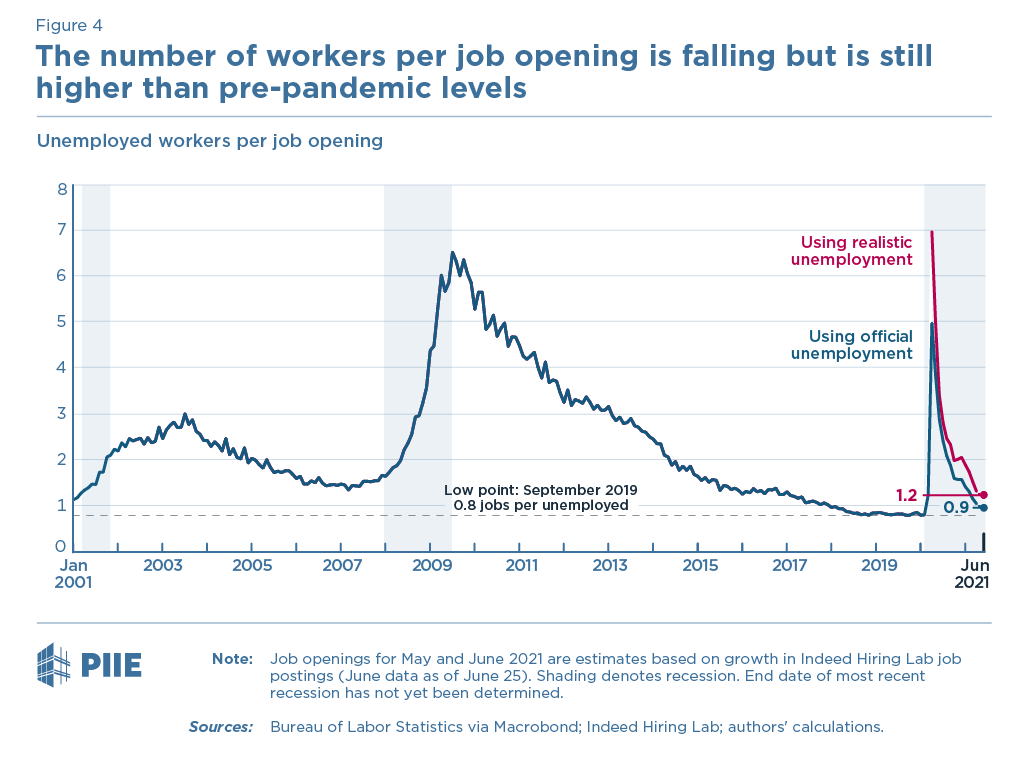 The best measure of the tightness of labor markets is wages. The last 15 months have been unusual in that very high unemployment did not result in any slower wage growth for the workers who kept their jobs—instead wage growth continued at a relatively fast rate with the fastest wage growth for the bottom quartile of workers.

Over the last three months wage growth has picked up to an annual rate of 6.6 percent for production and non-supervisory workers. This almost certainly understates true wage growth in the economy because many of the workers rehired have been in leisure and hospitality and other lower-wage industries, and as they re-enter the jobs numbers they drag down the average wage. It is impossible to do a full adjustment for this effect without the underlying micro data, but a crude adjustment holds the industry sector shares of total hours worked constant, effectively averaging the growth in wages within each industry sector. This shows that wages grew 1.9 percent over the last three months for production and non-supervisory workers, or 7.8 percent at an annual rate, faster than in any pre-pandemic three-month period since the early 1980s. (The three-month wage growth for all private workers was the fastest pre-pandemic growth on record, with data going back to 2006.)

The most important solution to the continued large shortfalls in the labor market is time. Time for workers and employers to find the right match. Time for the extent of the virus to improve. And time for expanded unemployment benefits to expire or be replaced by more modest increases in the states that have not yet dropped them. Time will help with millions of jobs, but it remains uncertain whether it will bring back all 9 million missing jobs or just a subset of them and how long this process will take.

The next many million jobs should be relatively easy to get back given the large number of openings and continued rapid economic growth. More difficult will be the last several million jobs. Jobs may end up short of pre-pandemic trends if people have left the labor force for good (e.g., due to early retirement) or if other changes have permanently reduced labor demand (e.g., employers hiring fewer workers who are higher skill and higher paid). The hope is that all the jobs can be regained, productivity could rise to support wage increases, and that continued high levels of demand could put the economy on a future path that is better than what was expected before the pandemic. Time will tell.