The New Trump Immigration Policy Is Bad for US Health

The Trump administration has produced a revised executive order that would put a temporary moratorium on refugee resettlement and suspend new visas for residents of six Muslim-majority countries: Iran, Libya, Somalia, Sudan, Syria, and Yemen. In a step to avoid the confusion of the administration’s earlier immigration order, nationals of those countries already holding visas may travel to the United States.

The Immigrant Doctors Project has produced data and detailed maps showing that 7,000 doctors providing roughly 14 million doctors’ appointments each year are from the six targeted countries. Moreover, these doctors are highly concentrated in the Rust Belt and Appalachia, regions buffeted both by the relative decline of their manufacturing-led economies and opioid and obesity epidemics. Doctors from affected countries provide 1.2 million doctors’ appointments in Michigan alone. These states also broke for President Trump in the 2016 election.

Where US patients rely on immigrant doctors 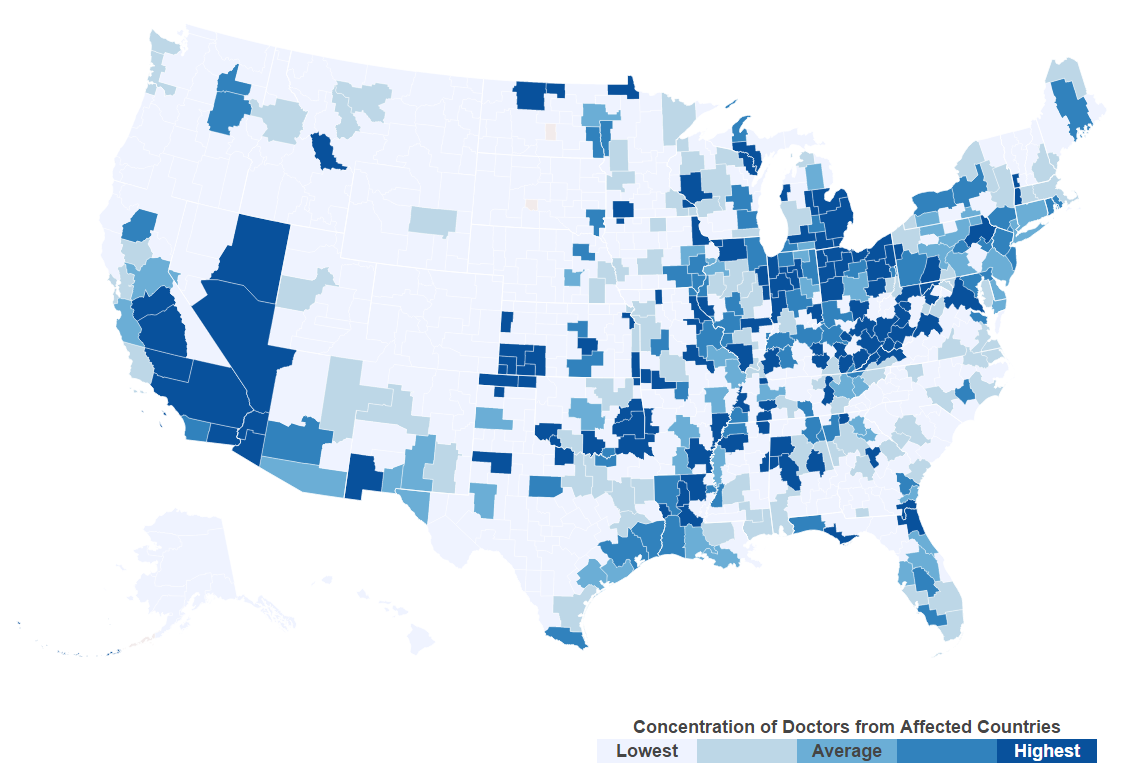 Immigrant doctors do not flock to the Rust Belt and Appalachia for the weather. They wind up there because US-born and -trained doctors are attracted to more lucrative positions in larger metro areas, thus creating a heightened demand in rural and poorer urban communities.

The US education system does not provide the labor market with enough doctors to meet current, much less forecast, demand. This story is a slice of a broader reality: The US labor market depends on highly educated foreign workers. A similar situation exists in other science, technology, engineering, and mathematics (STEM) fields, though across high-skill occupations there is some debate over whether H1B visa holders suppress the wages of US-born employees. However, medicine is not one of them.

This story is a slice of a broader reality: The US labor market depends on highly educated foreign workers.

Given that nationals of the six banned countries are already living and working in the United States legally, what effect might the ban have? For one, it discourages future immigration from these countries. Given expected growth in demand for medical services, it will be harder in the future to close the gap. For another, these doctors and their families will find it harder to travel between the United States and their home countries. Since H1B visas from affected countries require periodic renewal, the new order places them in legal limbo because it does not mention renewal.

The argument that the new executive order is necessary to secure the United States from terrorism is dubious at best. The effects for the US labor market—particularly for highly-skilled occupations like medicine—are uniformly negative. The poorer and more rural communities that will be worst affected are the ones that went disproportionately for Donald Trump in the 2016 election. One doesn’t put America first by imperiling America’s health.

COVID-19: Trump’s curbs on exports of medical gear put Americans and others at risk