The Limited Economic Impact of Terrorism in Europe

The euro area economy is not doing too badly. Growth is projected at 1.5 percent in 2016—a slight decline from the 2015 growth rate of 1.6 percent, thanks to the European Central Bank's policy of monetary stimulus and a gradual fiscal loosening because of the migration crisis. Still, the economy is hobbled by continued banking sector weakness in some member states, high unemployment in others, and the migration crisis.

Perhaps the biggest question mark concerns the effects of terrorist attacks, such as those in Paris in late 2015 and Brussels in 2016. The silver lining is that despite the horrific human carnage and widespread psychological damage, such attacks will almost certainly not impede economic growth. The attacks instead pose an element of uncertainty that is impossible to quantify.1

The economic impact of major attacks on civilians is usually short-term—measured in days or a few weeks—and the losses are often largely recouped in the following months.2 The impact is typically concentrated in the restaurant, hospitality, and tourism sectors, as people briefly stop eating/going out and travelling. 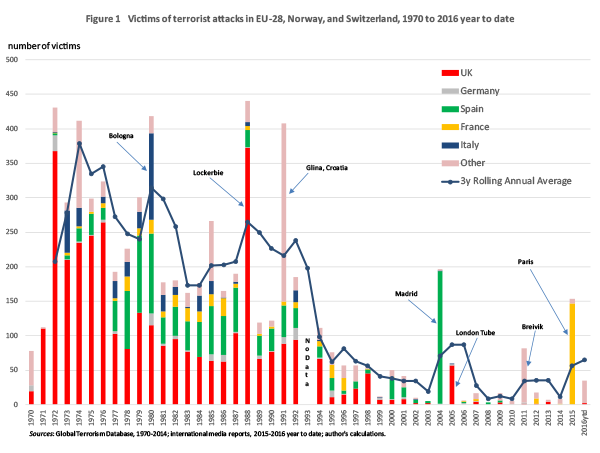 Figure 1 presents historical data from the Global Terrorism Database (GTD)3 for 1970–2014 and from international media reports for 2015 and 2016 year to date.4 As shown in the figure, the number of people killed in the recent Islamic State attacks in Europe has been lower than the number of terrorist killings in the 1970s and 1980s.The Cold War period was not nearly as stable as it is often portrayed today, and Europe's largest terror attack (since 1970) remains the bomb explosion aboard Pan Am Flight 103 over Lockerbie, Scotland, killing 243 passengers, 16 crew, and 11 civilians on the ground. Moreover, nationalist and political left/rightwing extremist terrorism—including the IRA in Ireland and the ETA in Spain—killed more Europeans in those decades than Salafists have recently. Few would also argue that Spain or the United Kingdom suffered economically from terrorism in the 1970s and 1980s.

At the same time, figure 1 makes it clear that Salafist terrorism in Europe has in the few cases it has succeeded—Madrid train bombings in 2004, London Tube bombings in 2005, Paris attacks in November 2015, and the Brussels bombings in 2016—had a far more indiscriminate murderous intent against innocent civilians than the terror attacks in earlier periods, which were targeted at what terrorists considered "legitimate oppressors" among public officials and security personnel. It might be the case that the effects of these recent attacks—because they are larger, random, and individually more murderous—actually do have a greater psychological effect on consumers than the more numerous terrorist killings in earlier decades.

A major difference between those attacks and the ones today, of course, is the multiplying effect of eyewitness accounts conveyed via social media, including videos and the narcissistic app-like features such as Facebook's "Safety Check," which allows you to check yourself as "safe" if you believe you are in the danger zone. These more personalized information channels may magnify the psychological impact on the public.

Even so, the recent terror attacks in Europe have not generated longer-term economic damage. Any damage that occurs in affected areas in terms of lower private investment and job creation should be offset by government spending there, leaving aggregate growth virtually unchanged. Even the 9/11 attacks did not prevent the US economy from returning to growth in the fourth quarter of 2001 and had only very short-lived effects on hiring and investment.

At least part of the explanation for this resilience is undoubtedly the democratic governmental systems in Europe and the West in general. A publicly elected government with a clear democratic mandate does not risk losing its legitimacy following a failure to prevent terrorism in the same manner as an authoritarian government, which almost invariably relies on its "good performance" to maintain a degree of political legitimacy. Large-scale terrorist attacks in China, for instance, would pose a much larger political risk to the Beijing government than terror attacks ever could in a democratic country.

In democratic capitalist societies, as witnessed in the United States after 9/11 and increasingly in Europe today, large-scale terrorist attacks tend to lead to faster employment growth in security-related sectors and increased government (as well as private sector) spending on these issues. They, of course, also tend to shift the equilibrium between personal privacy concerns and governments' need for surveillance. A narrow focus on the effects of terrorist attacks on aggregate GDP growth hence misses many qualitative and sectoral shifts. While the statement that terrorism does not affect GDP is valid, it is much harder to claim that it does not reduce long-term welfare of the society.

The earlier sustained nationalist terrorist campaigns, illustrated in figure 1, in Northern Ireland or the Basque Country, for example, while not really affecting GDP growth in the short run, would also have had negative longer-term effects in the form of lower private sector investments and job creation in the affected regions. It is difficult to construct a credible counterfactual to estimate the extent of such longer-term effects on economic growth, though it seems clear that some implicit "crowding out" takes place, as the central government increases spending in such regions to raise growth and lower the appeal of nationalist terrorist groups, thus making up for lost private sector activity.

The most important risks from terrorism in Europe are, therefore, political, not economic. The Madrid train bombings in 2004 occurred three days before a closely fought Spanish election. The attack may have contributed to the defeat of the incumbent center-right government, which compounded the problem by initially (and erroneously) blaming the ETA to shield itself from criticism over its earlier decision to join the US invasion in Iraq.

The odds in favor of a British exit from the European Union, which would have a negative economic impact, went up following the attacks in Brussels. It is also straightforward to imagine that a major terrorist attack in Germany, also perpetrated by returning Syrian jihadists, could force Angela Merkel to close the German border, causing economic damage on the whole region. Future attacks could push European leaders to make bad decisions.

Unfortunately for financial markets, the threat of terrorism is an example of "Knightian uncertainty"5—a "risk" that cannot be quantified and priced in to asset values. It is, therefore, not surprising that European financial markets did not really move following the recent Brussels attacks. They may do so, however, with a vengeance in response to a future bad decision by European leaders.

In the end, terrorism remains overwhelmingly a threat to human lives, not to the economy.

1. I am indebted to ongoing discussions with my PIIE colleagues on this topic, in particular Paolo Mauro, Adam Posen, Tamim Bayoumi, Olivier Blanchard, and Cullen Hendrix.

2. My colleague Cullen Hendrix kindly pointed me to probably the most rigorous recent empirical analysis of this issue in Gaibulloev, Sandler and Sul (2013).

3. The GTD relies on a multicriteria test for inclusion as a "terrorist attack". It defines a terrorist attack as the threatened or actual use of illegal force and violence by a nonstate actor to attain a political, economic, religious, or social goal through fear, coercion, or intimidation. In practice this means in order to consider an incident for inclusion in the GTD, all three of the following attributes must be present: (1) The incident must be intentional—the result of a conscious calculation on the part of a perpetrator. (2) The incident must entail some level of violence or immediate threat of violence, including property violence, as well as violence against people. (3) The perpetrators of the incidents must be subnational actors. The database does not include acts of state terrorism. In addition, at least two of the following three criteria must be satisfied for an incident to be included in the GTD: Criterion 1: The act must be aimed at attaining a political, economic, religious, or social goal. In terms of economic goals, the exclusive pursuit of profit does not satisfy this criterion. It must involve the pursuit of more profound, systemic economic change. Criterion 2: There must be evidence of an intention to coerce, intimidate, or convey some other message to a larger audience (or audiences) than the immediate victims. It is the act taken in its totality that is considered, regardless of whether every individual involved in carrying out the act was aware of this intention. As long as any of the planners or decision‐makers behind the attack intended to coerce, intimidate or publicize, the intentionality criterion is met. Criterion 3: The action must be outside the context of legitimate warfare activities. That is, the act must be outside the parameters permitted by international humanitarian law (particularly the prohibition against deliberately targeting civilians or noncombatants).

4. The data from international press reporting have been chosen based on my "common sense" definition of terrorism but have not been subjected to the more rigorous evaluation of the GTD and, of course, is not likely to be as comprehensive in coverage as the GTD. Hence data values for 2015 and 2016 may be downward biased.

Can Europe “Be Open But Not Stupid” on Foreign Acquisitions by China?