The slowdown in the growth of US wages in recent years is the result of many factors. Among them is the fact that in the last 15 years, the share of labor compensation as a portion of US total income has fallen below its normal cyclical variation. Before the turn of the century, the long-run shares of national income earned by capital and labor in the United States were stable. Sluggish wage growth has occurred despite a rapid rise in US output per worker. Moreover, since profits are far less equally distributed than wages, the increased share of economic output from capital has increased US income inequality.

The chart shows a striking trend: The aggregate share of labor compensation in the manufacturing sector has fallen even more sharply than it has in the GDP as a whole.1 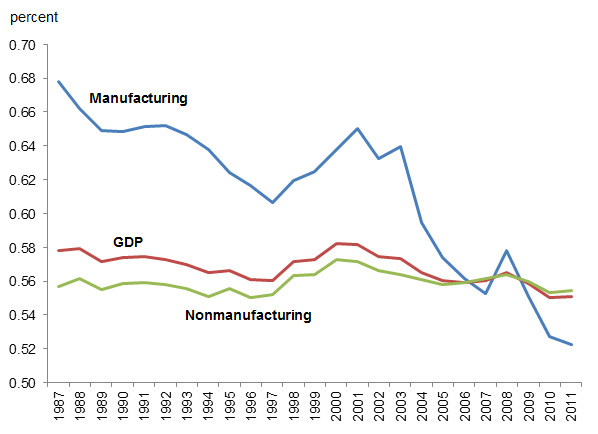 In both 1987 and 2000, as the red line shows, labor compensation comprised 58 percent of GDP, but this relatively stable aggregate share was the result of two trends—a large drop within manufacturing (blue line) offset by rising shares in other sectors (green line) that account for larger shares of output. After 2000, the declining GDP share from labor compensation reflected drops in manufacturing, mining, and information technology and insufficient increases and some small declines in other "nonmanufacturing" industries. All told between 1987 and 2011, the decline in manufacturing contributed 88 percent (2.4 percentage points) of the overall (2.7 percentage point) drop in labor's share in the economy overall.

Why has labor's share declined so dramatically? One possible reason is an erosion of labor's bargaining power due to a combination of declining unions, high unemployment rates, and globalization. This factor seems especially plausible, given the contrast between the decline in labor's share in manufacturing and its relatively stable share in services, a sector in which firms have been able to limit wages by threatening to move abroad. But this argument is contradicted by the fact that average worker compensation in manufacturing has actually kept pace with the growth in worker compensation in the rest of the economy. 2

Some part of the trend could be a shift towards more skilled workers, but the Employment Cost Index (ECI) provides estimates of the cost of employing a given skill-mix of workers over time. These estimates indicate that between 1987 and 2011, the ECI for manufacturing declined by just 2 percent relative to the ECI for all civilian workers. Basically, the 33.4 percent drop in manufacturing employment rather than slow wage growth was the major source of the fall in labor's share.

A second explanation for the decline in labor's share in manufacturing could be the direct impact of international trade. The United States could increasingly be importing products that are relatively labor intensive and exporting products that are relatively capital intensive. If this is the explanation, the shift to a higher capital share could result from capital-intensive industries having larger output shares, while labor-intensive industries shrink. Yet, a shift-share analysis using the data for 473 manufacturing industries indicates that between 1980 and 2009 only 16 percent of the decline is attributable to shifts in output shares between industries, while 84 percent of the decline is due to changes in payroll shares within industries.

This concentration of the changes within industries could result from international vertical disintegration due to offshoring within industries of labor-intensive tasks. But if this is the source of the shifts within industries, the activities that remain in the United States, and thus US manufacturing in general, should have higher capital-output ratios. Yet since 2000, the ratio of the real capital stock to real output in manufacturing has been falling. This result is obtained both when capital is measured as total next fixed assets or as the net stock of equipment. This weakness in manufacturing equipment investment also undercuts another popular explanation: increased automation and/or innovations that have reduced equipment prices and encouraged the displacement of workers with machines.

Instead, in research to be published later this year by the Peterson Institute, I find that the most convincing explanation for declining income share of labor is technical change—specifically an acceleration in labor-augmenting technical change, i.e. innovations that have made manufacturing workers more productive. These innovations allow firms to increase output, not by investing in more capital, but by actually using less labor more efficiently.

It is paradoxical that enhancing labor's productivity could reduce labor's share in income, and even under some conditions, lead to lower wages. But this paradox is understandable once we recognize that technical change that doubles each worker's productivity is equivalent to doubling the number of workers in supplying "effective labor." Just as, in the face of an inelastic demand, an increase in the supply of a product could reduce its price by enough to reduce total revenue, so too, when labor and capital are not easily substituted, an increase in the supply of effective labor could reduce labor's share in income, and even wages per worker. Moreover, if the same quantity of capital is combined with larger amounts of effective labor, the marginal product of capital will rise and thus labor augmenting technical change can also explain why manufacturing profit rates could have risen despite slow output growth.

These findings have some important implications. In his best-selling book, Thomas Piketty (2013) claims that labor and capital can be easily substituted—technically, that the elasticity of substitution is greater than one—and that labor's income share has fallen in advanced countries because the capital stock has grown more rapidly than output. To address what he regards as a new imbalance between labor and capital, Piketty advocates slowing down capital formation and increasing taxes on capital. But I conclude, as do many other studies, that the elasticity of substitution between capital and labor in the United States is less than one. If this is the case, the blame for labor's falling share should be placed with the weakness of investment, rather than excessive capital formation, and measures that increase investment rather than those that tax capital are the way to achieve higher wages and raise labor's share in income.

1. The Bureau of Economic Analysis has revised its methods for estimating GDP, but the new data are available only after 1997. To provide a consistent medium-term perspective, I use their earlier data available from 1987 to 2011. For years when both are available the revised data show larger declines in labor share and lower labor income shares.

2. Between 1998 and 2013, in the revised GDP data, for example, average compensation per full-time employee in the economy and in manufacturing increased by 62 percent and 64 percent respectively.

Raising the US Wage Floor: The International Perspective