The emergence of dangerous new coronavirus variants underscores the urgency of administering available doses of vaccine quickly. To date, however, that effort has fallen short. Too many jurisdictions appear to be allowing too much vaccine to sit idle for too long before getting it into the arms of residents. The data in this posting show which jurisdictions have been putting their doses to work most quickly and which have been lagging behind.

Speed of vaccine administration does not tell the whole story. A jurisdiction may perform well on this metric but abysmally on other dimensions. For example, a jurisdiction prioritizing speed of administration may meet its goal by going first to easy-to-reach populations, with adverse consequences for equity if minority or immigrant communities are harder to reach. Another jurisdiction may do well on administering vaccine but poorly overall, because it encourages disregard for mask wearing, social distancing, and other good public health practices. Although speed is not the only consideration, it is an important one, so it is worth measuring well.

Thus far, a common way to assess the speed of vaccine administration by state and local authorities has been to calculate the number of doses administered as a percent of doses delivered to these governments by the federal government. In the early going, this has been a useful approach. But as volumes ramp up, it will become less meaningful. To see why, consider that by January 14, the federal government had delivered 30 million doses of vaccine to various jurisdictions around the country. Of that amount, only 11 million had been administered. The other 19 million doses sat in refrigerators, not yet put to work. Many analysts decried the fact that only 36 percent of available vaccine had been administered. But suppose we look down the road a few months, to when five times as many doses—150 million—have been delivered. Even if the same large number of doses (19 million) were to be sitting idle, the number of doses administered as a percent of doses delivered would be a more impressive 87 percent. State and local performance would remain unsatisfactory, but the usual metric would seem to point to a more positive conclusion.

At the other end of the spectrum, 22 jurisdictions—including 13 states—had not, as of January 30, administered as many doses as they had already received by January 12, 18 days earlier. Many different factors may help explain the delay, but 18 days is too long to wait.

The path ahead will not be easy, but it is essential that available doses be administered quickly, equitably, with careful attention to saving lives, and in a manner that honors our front-line medical workers. We have a long way to go. 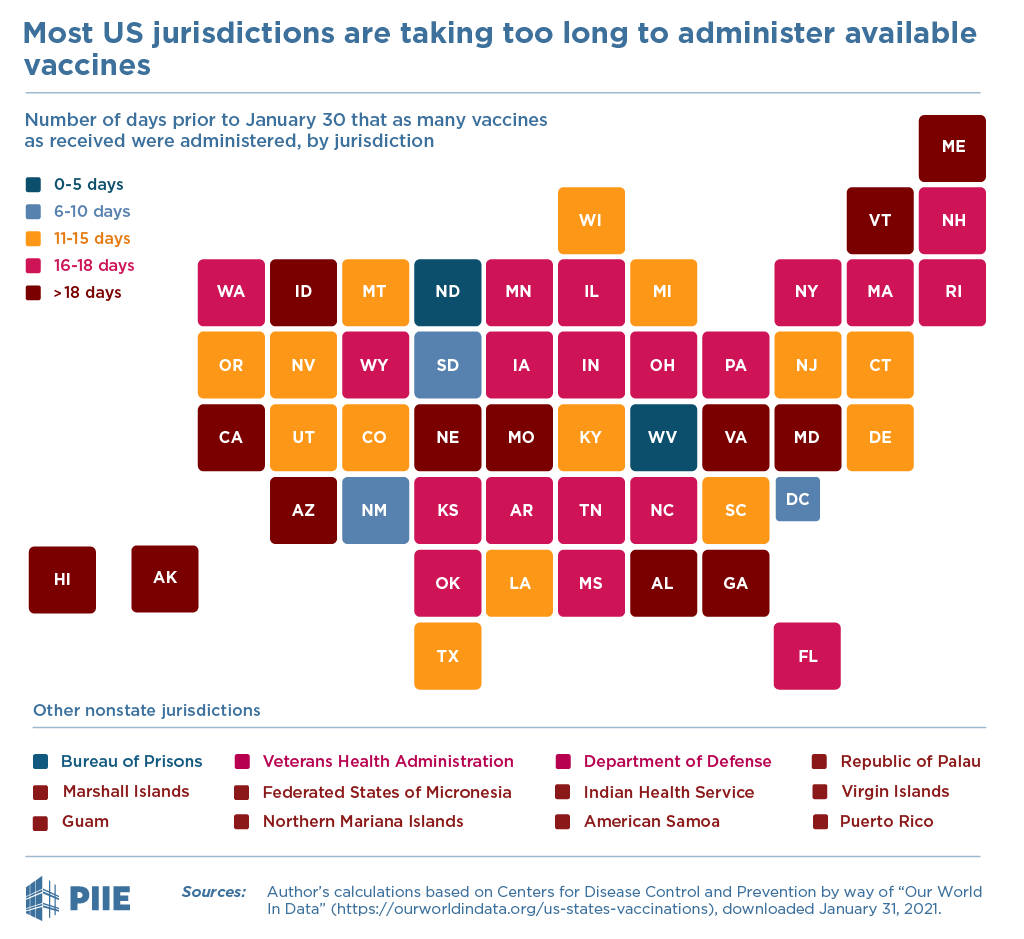 1. As shown in the table, the best performing jurisdiction overall was not a state but rather the Federal Bureau of Prisons. In fact, the Bureau of Prisons reported having administered more doses as of January 30 than the federal government had delivered to it. This apparent anomaly may reflect the fact that in some cases, it has been possible to extract more doses per vial than the manufacturer claimed credit for.

2. The calculations reported in this post do not take account of doses lost to spoilage or other similar causes.

3. The data shown here should not be affected by the federal government’s initial intention to withhold enough supply to provide second doses. Assuming those doses were warehoused at the federal level, they would not show up in deliveries to the state and other jurisdictions, and therefore should not have been an impediment to speedy administration.