The International Monetary Fund (IMF) has been the central institution of monetary cooperation for 75 years. It is again in the COVID-19 pandemic. However, its financial resources are limited to about $790 billion. Unlike a central bank, the Fund cannot expand its balance sheet with the click on a keyboard. It does, however, have one tool to augment instantaneously the international reserves of its members: allocating special drawing rights (SDR). G20 leaders should agree to support a $500 billion SDR allocation, which would instantly increase each IMF member’s international reserves. It would significantly benefit poorer countries and help build confidence at a time of global crisis, dramatically demonstrating international cooperation.

The IMF created the SDR in 1969 to supplement other reserve assets of member countries. It is not a currency but is based on a basket of international currencies comprising the US dollar, Japanese yen, euro, pound sterling, and Chinese renminbi. SDR are both assets and liabilities of the IMF. They are allocated to members in proportion to their shares of IMF quotas. A member can transfer SDR to another member and receive credit in a convertible or hard currency, for example, US dollars or euros.[1] The current interest rate on this credit is at its minimum of 0.050 percent.[2] An SDR allocation is a low cost way of adding to members' international reserves, allowing members to reduce their reliance on their limited reserves at a time of crisis.

First, there is no general need to increase international liquidity. However, the international scramble for US dollars in the COVID-19 pandemic demonstrates that there is a general need. The Federal Reserve’s liquidity facilities are available mostly to advanced-country and emerging-market central banks, but that leaves out much of the developing world.

Second, the allocation would lead to an increase in inflation as countries spend their SDR. We learned from the global financial crisis of 2007–09 and developments since then that inflation is not likely to be an important issue for years to come.

Third, SDR would be allocated to countries without imposing any conditions on recipient countries’ economic policies. In the COVID-19 pandemic, providing financial assistance without strings attached is the number one approach being used by countries. Why should the IMF be different?

Fourth, the SDR would be allocated to countries that do not need a boost to their international reserves. Such countries would not need to use their SDR, but along with no benefit there would be no cost.

These last two arguments amount to a cynical statement that an SDR allocation would go to countries that either do not need or do not deserve a boost to their reserves. Nothing could be farther from the truth.

Arguments in favor of SDR allocations

First, unlike most other large, fresh initiatives, an SDR allocation can be implemented quickly. A decision by the IMF executive board, for example, on May 1, 2020, to allocate $500 billion of SDR can be implemented by early August when the economic effects of the pandemic will still be raging.

SDR should be allocated quickly to maximize their positive impact on global economic confidence and their usefulness to recipient countries. Consequently, the proposal should confront the minimum of legal barriers in member countries. For the United States, the law limits to the size of the US quota in the IMF the amount of an SDR allocation during one basic period of five years that the Treasury secretary can vote for after giving a 90-day notice to Congress without receiving advance congressional approval.

The US IMF quota is $113.3 billion.[3] The US share of IMF quotas is 17.45 percent. Therefore, today the Treasury secretary could vote for an SDR allocation of up to $649 billion without receiving explicit congressional approval. These calculations suggest that the allocation could be as large as $600 billion and still be safely under the congressional limit. However, we stick with the illustrative figure of $500 billion in this blog.

The United States must approve any SDR allocation because an 85 percent majority vote is required, and the United States’ voting share is 16.51 percent of the total.

Second, the allocation of $500 billion of SDR would boost total international reserves, excluding gold, of the 189 IMF members by 4.5 percent from $11.2 trillion at the end of 2019. For many countries, this increase would be significant on average. SDR allocations are distributed based on quota shares, with the consequence that the countries with the largest quotas receive the largest allocations. However, IMF quotas are less skewed in the direction of large wealthy countries than reserve holdings. Consequently, an allocation of $500 billion of SDR would boost the international reserves of 77 IMF members by 10 percent or more. Emerging-market and developing economies would receive 38.45 percent of a $500 billion SDR allocation.[4] Fifty-six of these members would receive at least a 10 percent boost and 17 of them would receive increases of more that 50 percent. For advanced-country members, 21 would receive a boost of at least 10 percent and 4 would get increases of more than 50 percent (figures 1 and 2). 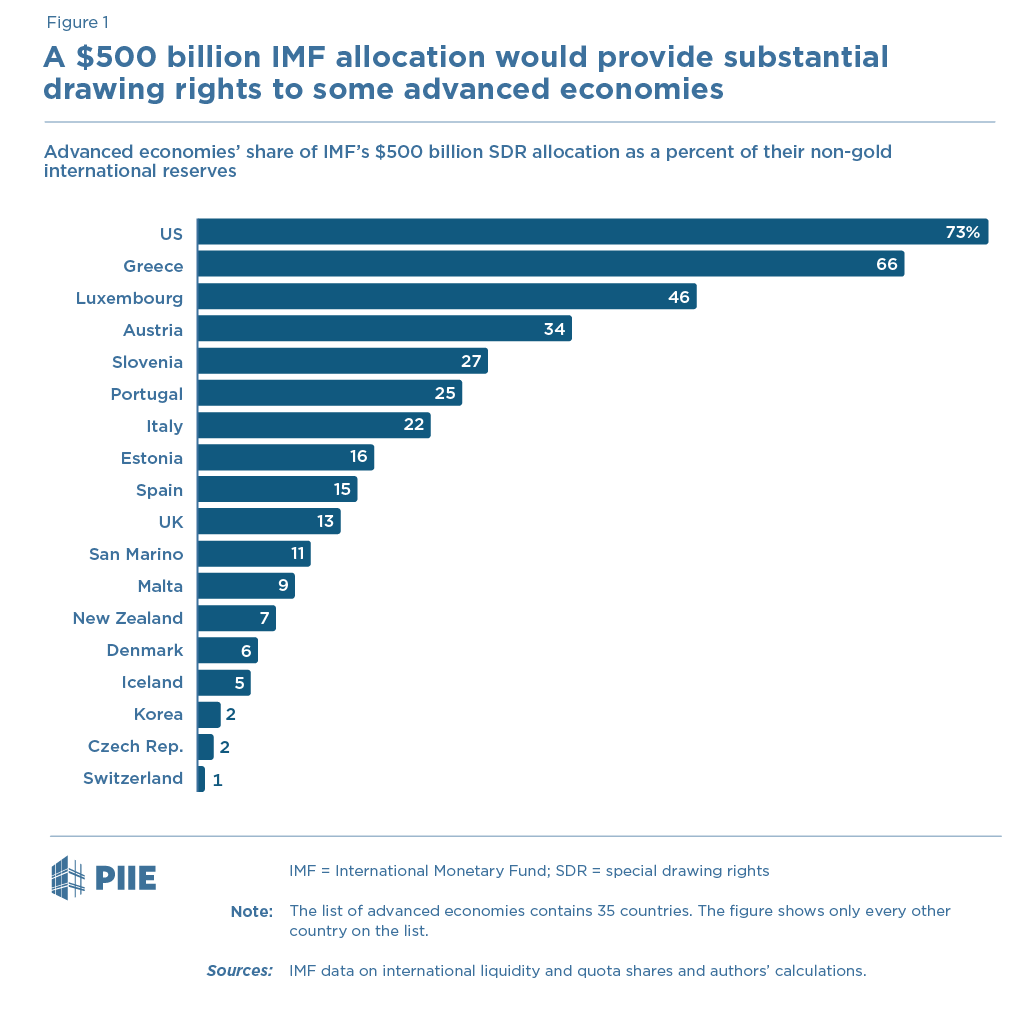 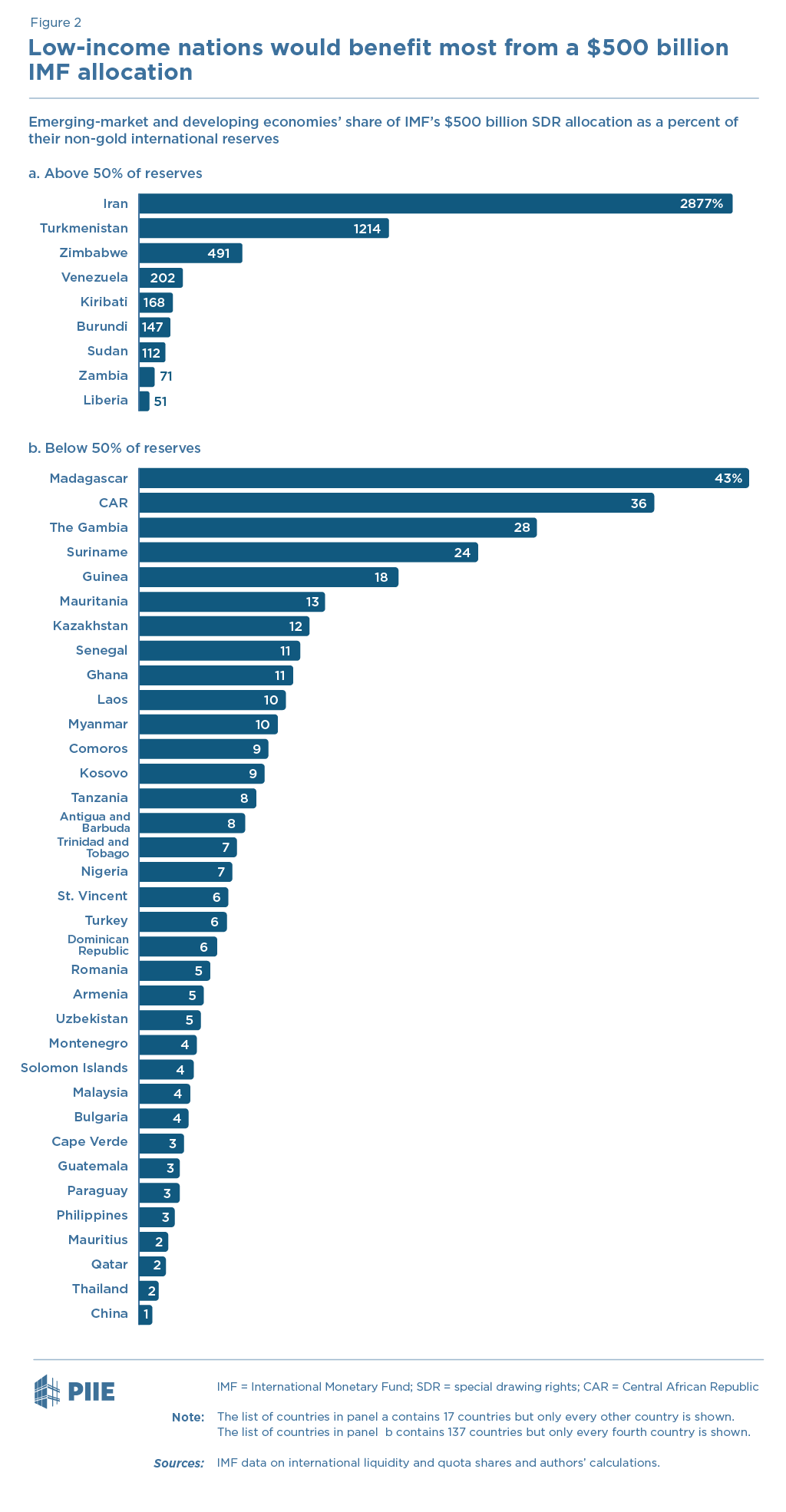 Third, the 76 low-income and other countries that are potentially eligible for loans from the World Bank’s International Development Association (IDA) would receive $22 billion in SDR. This amount might look tiny, but it would amount to a 9.4 percent boost to their combined international reserves. For 22 of the 76 countries the boost would be 20 percent or more. The $22 billion total compares favorably with average annual IDA commitments over the past three years of $21.2 billion and disbursements of $14.9 billion.

A $500 billion SDR allocation would not solve all the challenges facing the IMF and its members from the COVID-19 pandemic, but it would help significantly. Most important, it would build confidence in countries to seek cooperative solutions in this difficult time.

2. Interest is charged on the difference between a country’s allocation of SDR and its holdings. That rate is based on a weighted average of representative rates on short-term government debt instruments in money markets of countries issuing the five currencies in the basket valuation of the SDR subject to a minimum of five basis points.

Note: Updated April 13. In the blog posted on April 10, some numbers and the associated figures for the increases in countries’ reserves from a $500 billion allocation of SDR were distorted due to a programming error.