How Much Global Fiscal Stimulus?

In the run-up to the G-20 deputies meeting in Shanghai this weekend, several calls have been made—including by the International Monetary Fund (IMF), the Organization for Economic Cooperation and Development (OECD), and the US Treasury—for coordinated stimulus to aggregate demand through measures such as more muscular fiscal policies by countries that have "space" to undertake them (that is, countries whose government debts and deficits are not perceived as excessive and that can borrow at low interest rates). Although additional fiscal stimulus—especially through public investment—in the few countries that can afford it would be appropriate, a major coordinated fiscal stimulus is neither likely nor desirable at this time.

To put these calls into perspective, and focusing on fiscal policies alone, it is useful to consider the following figures reporting fiscal and output aggregates for the world and for advanced economies. In 2008 and 2009, faced with the Great Recession, governments provided the largest fiscal stimulus after World War II. Against the background of a sharp drop in output, real government expenditures were increased substantially (figure 1), despite a collapse in fiscal revenues. That stimulus was largely unwound in the subsequent years. Indeed, expenditures grew little, if at all, for a few years, while revenues gradually recovered. 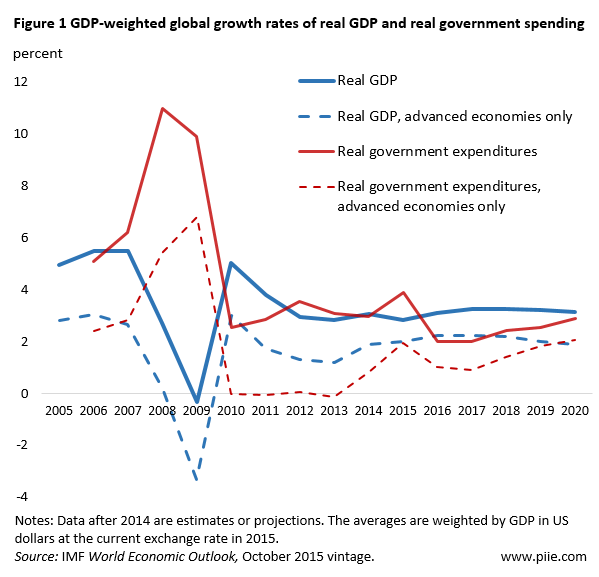 Using data and projections as of October 2015, the structural fiscal deficit (which corrects the fiscal deficit for temporary factors and cyclical factors, such as higher unemployment benefits) was approximately stable in 2015 compared with 2014, indicating a "neutral" fiscal stance (figure 2). And the structural fiscal deficit for 2016 is projected to be slightly smaller (indicating a small withdrawal of fiscal stimulus) than in 2015. Meanwhile, GDP growth in the world economy is positive but lower than before the Great Recession. 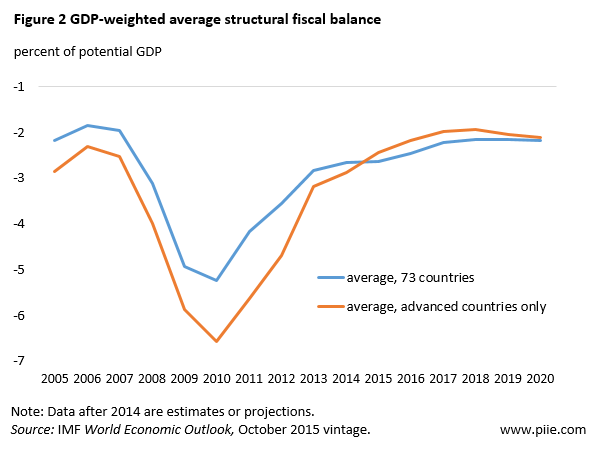 The question being discussed at the G-20 is whether it is desirable and feasible to provide a positive fiscal stimulus in 2016 and 2017 rather than a neutral fiscal policy, though coordinated fiscal stimulus anywhere near the scale of what was done in 2009 is not in the cards. With much higher government debt-to-GDP ratios today than before the Great Recession, particularly in the advanced economies, space for fiscal stimulus is more limited and less needed, given that growth remains positive in most economies. The cost of government borrowing has declined, partly owing to quantitative easing—itself a policy that will not last forever—thus helping the sustainability of public finances. But the rate of economic growth is also likely to have declined in a lasting manner compared with pre-crisis rates.

For those countries that retain fiscal space—notably Canada and Germany—additional fiscal stimulus is appropriate. In most countries, tilting the composition of spending toward infrastructure is also desirable and likely to help improve public finances in the long run. In Europe, additional spending to ensure that refugees are quickly integrated and become productive should also be viewed as an investment. Globally, however, a major fiscal stimulus is unlikely and would be premature at this time.