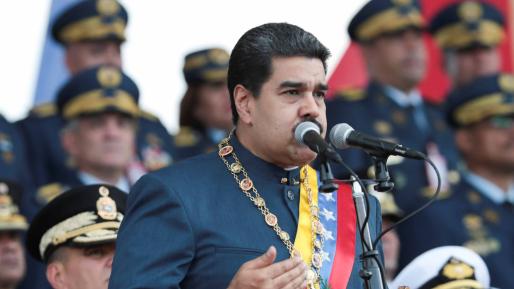 How Maduro's Venezuela Playbook Borrows from Mugabe in Zimbabwe

Almost since the day he came into power following Hugo Chávez’s death in 2013, President Nicolas Maduro of Venezuela has confronted predictions of his imminent downfall. Despite his gross economic mismanagement, squandering of oil revenues, threats of a debt default[1] and rising poverty, he has held on. In fact he has recently worked to consolidate power by calling for a new Constitution while persecuting political opponents.

The story of an authoritarian leader actually leveraging the disastrous consequences of his policies to stay in power is not new. Maduro’s playbook resembles that of another dictator—Robert Mugabe, ousted last month as president of Zimbabwe after 37 years in power. Mugabe’s fate was a long time in coming, indicating perhaps that Maduro may not last forever.

Under the Mugabe regime, Zimbabwe went from being a relatively stable country with average annual per capita GDP growth of 2.2 percent between 1967 and 1980, to an economic disaster following independence from British rule in 1980, when Mr. Mugabe was elected prime minister. (He became President in 1987.) Between 1981 and 2015, Zimbabwe’s GDP per capita fell 0.5 percent annually on average, and the country suffered one of the worst hyperinflations ever recorded in 2008 due to gross macroeconomic mismanagement, notably overspending, and rising fiscal deficits that were covered by printing money. He was succeeded this month by a former Marxist guerilla like himself, Emmerson Mnangagwa, , his trusted minister of state security and justice for over 20 years, and, more recently, his vice president.

Drawing comparisons between two disparate countries is always risky, yet some similarities between Zimbabwe and Venezuela are striking. Like Mugabe, Maduro turned to the printing press after the sharp drop in oil prices since 2014. Rising budget deficits associated with not only the shortage of oil revenues but also lax fiscal policies and overspending fueled a sharp increase in domestic inflation and led to general macroeconomic disarray. In Zimbabwe’s case, overspending and excessive money creation ultimately pushed inflation to a mind-blowing 230,000,000 percent in 2008. In Venezuela, the International Monetary Fund (IMF) estimates that similar policies will push inflation to around 1,600 percent in 2017, and possibly to 2,300 percent in 2018.

But Mugabe responded to these disasters by portraying himself as a symbol of resistance to “imperialism,” while railing against rich countries, notably Britain. Similarly, Maduro has capitalized on his rantings against the United States, particularly following the imposition of sanctions on Venezuelan officials earlier this year. Soon after sanctions were extended in August, Maduro’s approval ratings rose to 23 percent, topping those of Colombia’s Juan Manuel Santos and Brazil’s Michel Temer by a wide margin. The violent protests in early 2017, ignited by widespread food shortages and rampant inflation, have since subsided both because of the Maduro government’s brutal crackdown and effective shifting of blame to the United States. Blaming the United States for Venezuela’s troubles has enabled Maduro to go after political opponents and purge his own government of those he perceives as a risk to his regime.

Mugabe once famously asked: “Have you ever heard of a country that collapsed because of borrowing?” Yet countries have indeed collapsed because of borrowing, notably in Latin America. But if by his own question Mugabe meant “regime” rather than “country,” then the answer is not nearly as obvious. Mugabe is no longer president, but not much is likely to change under his successor. Meanwhile, Maduro seems on course to scrapping the 2018 presidential elections altogether, or making it impossible for any competitive opponent to emerge.

1 Some payments were recently missed, placing Venezuela in “selective default” status, but Russia has provided the government with needed debt relief.