The markets, however, are not convinced. While they are coalescing around the idea that the Fed will start raising rates in September—which would be compatible with the dots chart—the markets' path of short term interest rates beyond 2015 has been diverging significantly from the dots chart (see figure 1). This divergence is not unique to the FOMC: Other central banks that publish their optimal rate paths, such as Riksbank, Norges Bank, and the Reserve Bank of New Zealand, have also experienced persistent divergence versus market pricing. And some divergence is to be expected, as the dots represent the optimal path of rates while the market path is a probability-weighted outcome. However, the market seems to have a large bias towards scenarios where the neutral interest rate is lower, growth is weaker or less resilient, the US dollar is permanently stronger, or inflationary pressures are softer than the Fed expects and historical experience suggest.

A number of reasons explain why the market expects interest rates to be lower than the FOMC dots. First, the Fed is preparing to hike rates several years into the expansion, at a time when history indicates the probability of a new recession starts increasing. The average length of the 11 postwar US economic expansions (as defined by the National Bureau of Economic Research) has been about 4.5 years (56 months). The current recovery is already six years old and could be ripe for a slowdown. But this argument is misleading. The standard deviation of those 11 expansions is 35 months, which means that, assuming a normal distribution, there is a 95 percent probability that the "average expansion" would last between zero and 10.5 years. And given the depth of the Great Recession, nothing prevents the expansion from being longer than previous ones. After all, expansions don't die of old age. Expansions die either because the economy overheats and monetary policy is tightened to cool it down or because the economy is hit by an unexpected shock. The US economy is far from overheating, and faces no obstacles to several more years of sustained growth.

Second, the market may be considering that, regardless of the length of the recovery, the expansion depends on low interest rates, and thus the Fed will need to keep interest rates lower than it thinks in order for the economy to continue growing. In other words, the market may have a lower estimate of the neutral interest rate.1 This would be consistent with the secular stagnation hypothesis, as it would imply a neutral interest rate that remains very close to zero for several years. It would also be consistent with the market believing that the US dollar will be persistently stronger, as the Fed will be the only major central bank tightening policy, and therefore part of the tightening that would be happening via interest rates would happen via a stronger US dollar. To some extent the FOMC seems to share this view, as the sharp appreciation of the US dollar during December 2014–March 2015 led to a reduction in the FOMC dots for 2016–17.

Third, the market could also be considering that the Fed's rate hikes will be a mistake, because the recovery heavily depends on the very low interest rates, and therefore the Fed may have to reverse course at some point and cut rates—as has happened in Sweden or Canada, for example, where the central banks have had to cut rates just a couple of years after raising them.

Fourth, the market may have a similar view on growth prospects but be more pessimistic than the Fed about future inflationary pressures. If, for a given level of growth, inflation is lower than expected, interest rates will be kept lower than otherwise. This could be the result of, for example, a lower natural rate of unemployment2 resulting, for example, from the increasing share of so-called contingent workers (workers who lack job security, have unpredictable job schedules, and are paid less than full-time workers). This phenomenon has exerted persistent downward pressure on Japanese wage growth over the years and is becoming an important factor in the United States as well. It could also be the result of a higher level of potential growth, driven by the likely undermeasurement of the contribution to growth of the information technology sector (price deflators are not able to fully capture the value of the many services that are now being offered for free).

The FOMC dots and the market interest rate path are representations of different concepts and thus not directly comparable. On the one hand, the FOMC dots reflect "optimal interest rates"—reach FOMC participant's path of interest rates that would deliver the Fed's growth, unemployment, and inflation forecasts. They show the FOMC's preferred scenario, what it would like to deliver, without taking into account the uncertainty associated with any forecast. On the other hand, the market pricing is the probability-weighted path of interest rates that the market foresees. In other words, the market assesses all the possible scenarios and averages across them to obtain the most likely scenario.

Thus, the market path simply indicates that it thinks downside scenarios—where the Fed either can't start hiking rates or has to cut rates after starting the hikes—are more likely to occur than upside scenarios— where the Fed has to hike rates faster than the optimal pace due to overheating of the economy. This is consistent with long-term inflation expectations—measured by the inflation compensation embedded in long-term interest rates—being at the very low end of their historical range. The market is telling the FOMC that, if it follows its announced path, it may be erring on the side of raising rates too early, too much, or too fast. By December 2017 the market rate is below the lowest FOMC dot. The market is completely one-sided in its assessment of the growth and inflation outlook and therefore very vulnerable to upside inflation surprises.

An interesting feature of the dot plot is the wide range of the dots. By December 2016, just 18 months away, the FOMC participants, all facing the same mandate of achieving sustainable growth and stable inflation, see optimal short-term interest rates in the 0.5 to 3.7 percent range. This wide range reveals deep differences across FOMC participants regarding the neutral interest rates, the natural rate of unemployment and the amount of slack available in the economy,3 the nature of the inflation process, and, probably, the impact of financial stability concerns on the setting of interest rates. These wide differences complicate the task of communicating with markets and are a bit unsettling, as they reveal very low confidence by the FOMC on their understanding of the economy they have been tasked to manage.

Figure 3 compares the uncertainty embedded in market pricing and the dots—even though they represent different sources of uncertainty. The dots reflect mostly model uncertainty (different FOMC participants use different models of the economy and the policy process to generate the dots, but the dots do not incorporate economic uncertainty) while the market incorporates both model and economic uncertainty. The green lines show the 90 percent probability area around the market interest rate path, while the blue lines show the interest rate path determined by the highest and the lowest dots. The chart shows that the market associates less than 5 percent probability to the highest dots (the blue highest dot line is well above the upper green 90 percent line). The chart also shows that the market associates a nonzero probability to a scenario where the Federal Reserve can't raise rates and has to cut rates over the next 12 months—the lower green 90 percent line is below zero until March 2017.

Figure 4 shows an alternative way to analyze the market probabilities. The blue line shows the cumulative probability derived from option prices that 3-month eurodollar interest rates will be at a certain level by December 2016; the red line shows the same information for December 2017. The dots represent the FOMC median dots (adjusted by the spread between federal funds and 3-month eurodollar rates; this spread ranges between 20 and 30 basis points, depending on the maturity; the December 2016 dot at 1.87 percent is equivalent to 2.2 percent 3-month rate). As of today, the market considers there is almost 90 percent probability that short-term interest rates will be below the FOMC dots by December 2016.

The Fed dots are a healthy reminder to households and market participants that, even though interest rates have been low for many years now, they can increase significantly in the future, and thus borrowing decisions must take this possibility into account. In this vein, the Fed dots play a prudential role. Market probabilities will likely shift gradually towards the optimal scenario once the Fed starts raising rates in September and markets become more convinced that the hiking cycle is sustainable. But the market is not yet giving the Fed and the US economy the benefit of the doubt. 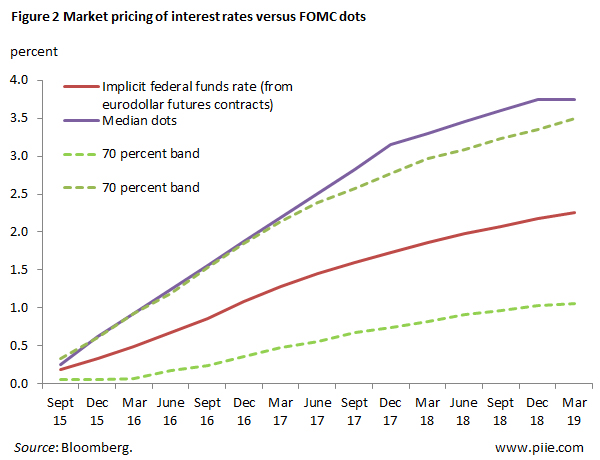 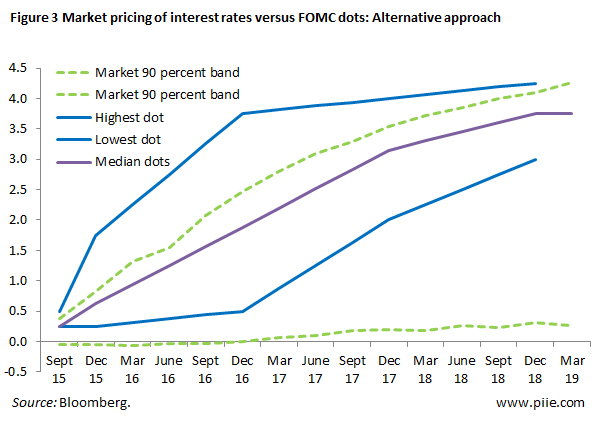 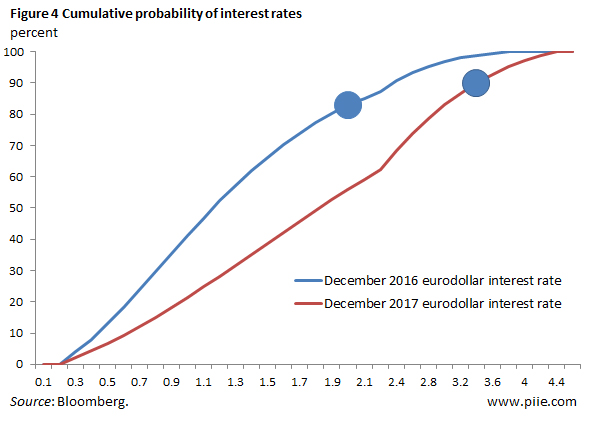 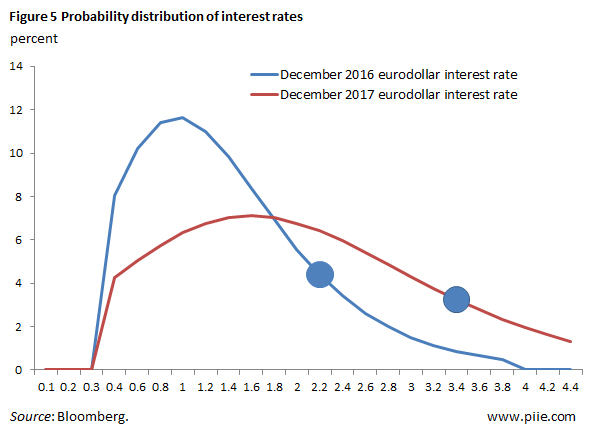 1. The neutral interest rate in the rate that delivers potential growth and target inflation rates.

3. The amount of slack is the difference between the level of current output and the level of potential output.

Why the Fed Should Postpone Rate Hikes

Monetary Policy with Abundant Liquidity: A New Operating Framework for the Federal Reserve

The Dollar and Its Discontents