The victory of the extreme left-wing party Syriza in the Greek parliamentary elections on January 25 is a wake-up moment. The outcome of the ensuing economic policy discussion is likely to be decisive for Europe for a long time. Two opposing views were recently published in the Financial Times illustrating the dilemma facing the region. Reza Moghadam argued that the European Union should write off half of its debt to Greece, while Gideon Rachman contended that now Europe could not afford to forgive any debt to Greece.

Meanwhile, Paul Krugman hailed Alexis Tsipras, leader of Syriza, in the New York Times as "the first European leader elected on explicit promise to challenge the austerity policies that have prevailed since 2010." After all Greek markets plummeted by a fifth over three days, Krugman backpedaled. "Markets are panicking," he asserted. Then, implausibly, he added: "It's important to understand that this is not a verdict on the new Greek government, or at any rate only the new Greek government; it's a judgment that the risk of no agreement, and a disorderly breakdown of the whole process, is high."

Greece has a long history of bad economic policies, eminently analyzed by Nikos Tafos in his 2013 book Beyond Debt: The Greek Crisis in Context. Since Andreas Papandreou came to power in 1981, Greece has stood out as a model of fiscal irresponsibility. Greece had an average budget deficit of no less than 8.7 percent of GDP from 1981–99, and Papandreou ruled 11 of those years. His was a parasitical and oligarchic regime that used socialism to rebuild an old clientele system of poor governance.

Aspiring to defend the "cradle of democracy," the European Union ignored the issue of moral hazard and bailed the country out with large grants of several percent of GDP every year. The European Union further abandoned its legal and financial standards when it admitted Greece to the European Union in 1981 and when it entered the Economic and Monetary Union (EMU) in 2001. Greece's fiscal mismanagement continued until Greece reached a budget deficit of 15.6 percent of GDP in 2009 and a public debt of 127 percent of GDP (Eurostat). In early 2010, Greece lost access to international financial markets, because the markets—having awakened to disclosures that the deficit situation was even worse than it appeared—finally lost confidence in the ability of the Greek government to manage its public finances.

In such financial distress, three things are normally done. First, the country in trouble needs to cut its budget deficit so that its public finances become sustainable. Second, the suffering country must carry out substantial structural reforms so that economic growth can be unleashed. Third, the international community, mainly the International Monetary Fund (IMF), possibly with some support from others like European authorities, provides sufficient low interest rate credits so that the public and international debt can be managed.

Greece could have followed the successful Latvian crisis resolution when its crisis erupted in 2010. Because most Greek economic indicators were worse than Latvia's, an even more radical and frontloaded fiscal consolidation would have been advisable. Unfortunately for the poor Greeks, the opposite happened. According to the IMF, its fiscal adjustment in 2010 was a miserable 2.5 percent of GDP and in 2011 only 4.1 percent of GDP. While Latvia had carried out a fiscal consolidation of 14.7 percent of GDP in two years, Greece did only 6.6 percent of GDP, although its crisis was worse. Its total fiscal adjustment over four years was only 11.1 percent of GDP (table 2). The attempted therapy fell far short of addressing the disease, precluding any cure. No financial confidence was restored.

The consequences of the tepid fiscal stabilization in Greece have been devastating: six years of cumulative output falling 24 percent rather than two years of lesser misery. Latvia suffered such a fall in output in the course of two years in 2008–10, but the cause was external: a severe liquidity freeze that Greece avoided thanks to being a member of the EMU and therefore enabling it to enjoy abundant liquidity of the European Central Bank (ECB). Having restored its public finances after two years, Latvia has geared up to a solid economic growth of over 4 percent a year since 2011 and has thus caught up much of its lost output (figure 2). 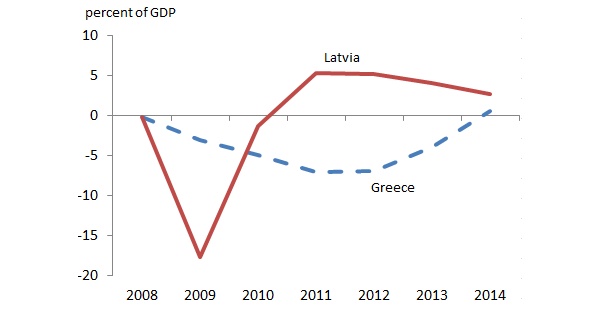 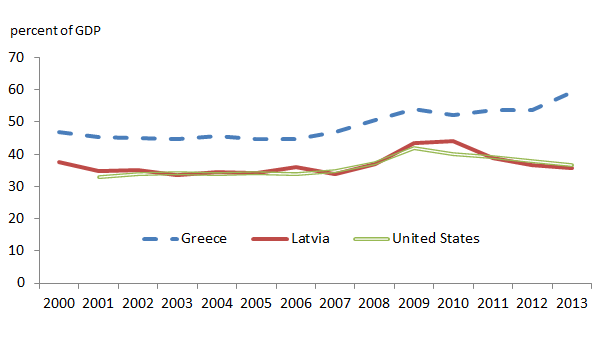 Sources: Greek data from 2000–2005 and US data from International Monetary Fund World Economic Outlook October 2014 database; Eurostat for all other data.

Contrary to widespread misperceptions, Greece has not had any particular problems with its state revenues, and as tables 1 and 2 show, Greece has increased its already high tax burden substantially, much more than Latvia, which has had a far lower tax burden all along.

What Europe really needs in order to achieve economic growth is structural reform to improve governance and open up markets. Needless to say, Latvia did far more than Greece in structural reforms, because the correlation between fast fiscal adjustment and structural reform is strong. On the latest World Bank Ease of Doing Business Index, Latvia ranks 23, while Greece ranks 61, as the country with the very worst business environment in the European Union together with Cyprus and Croatia.

Greece's failure to restore the confidence of the markets for five years is also the product of an unsustainably loose fiscal policy. Excessive public expenditures are being spent wastefully for the dubious benefit of the politically powerful public employees. Its taxes are among Europe's highest, deterring business investment. Investors are scared away by the worst business environment in Europe.

How could the IMF and European Union come up with such a bad program? The reasons are many. The European Union did not realize that a financial crisis could occur in the euro area and was completely unprepared in all regards. The European Union has a lot of money and initially substituted funds for thoughts. That is a big separate topic.

One reason is that the IMF has gone astray intellectually. In January 2013, the IMF's chief economist, Olivier Blanchard, and his colleague Daniel Leigh (2013) published a working paper, arguing that fiscal multipliers—the change in output induced by a change in the government's budget deficit—were larger in current circumstances than previously thought. Tight fiscal policy, in other words, would squeeze output more than economic modelers had typically supposed. The implication was that fiscal adjustment should be delayed. There were many problems with this paper. It was based on forecasts of economic growth, but in the early stage of a crisis, forecasts tend to be widely off the mark. The argument presumes that a country has access to the capital market, but the IMF intervenes because a country has lost such access. Moreover, in the midst of a crisis, the political economy is conducive to radical reform, while reform becomes much more difficult later on. A crisis is a terrible thing to waste, but that became the official IMF advice. Finally, the Blanchard-Leigh paper is entirely short-term, focusing on GDP in the year after a fiscal adjustment. But what matters is long-term economic growth, and that depends on structural reforms.

Last but not least, Krugman's persistent pronouncements from the pulpit of the New York Times that austerity is wrong have presumably been a major contributor to the sort of thinking that has led to flawed economic policymaking in Greece. In 2008–10, when Latvia, as well as Estonia and Lithuania, carried out their successful fiscal consolidations, Krugman complained loudly about the terrible consequences of austerity. When they all recorded high economic growth, he refused to concede his defeat.

Krugman never acknowledges the simple fact that Greece has pursued insufficient fiscal responsibility. His persistent advocacy of even less fiscal adjustment would have led to even worse social suffering. Yes, as many in Greece are demanding, something should have been done to ease the burden of Greek public debt. But debt relief is best offered in return for credible fiscal and structural policies that Greece has not produced.